Perspectives | How do Armenia’s young people see their country?

Survey data show that younger Armenians have more faith in their country’s armed forces and in Russian integration than older generations. Armenia’s youth have been through a lot in the last few years: First 2018’s “Velvet Revolution,” in which young people played a significant role, and then the 2020 war with Azerbaijan, in which the fighting and dying was done overwhelmingly by young conscripts.

Add to this the great changes that the entire region and world has gone through at the same time. So what do Armenian young people think about their country’s politics, society, and the direction it is heading?

Young Armenians broadly continue to see their revolution as a success. Data from the Caucasus Barometer (CB), a project of the Caucasus Research Resource Centers, show that in 2020 around 60 percent of young Armenians were “somewhat” satisfied with the revolution’s outcomes, compared to around 6 percent who were “not at all” satisfied. But these proportions were the same as in the population as whole, suggesting that even though young people invested more in the revolution, they don’t feel they have gotten more out of it. 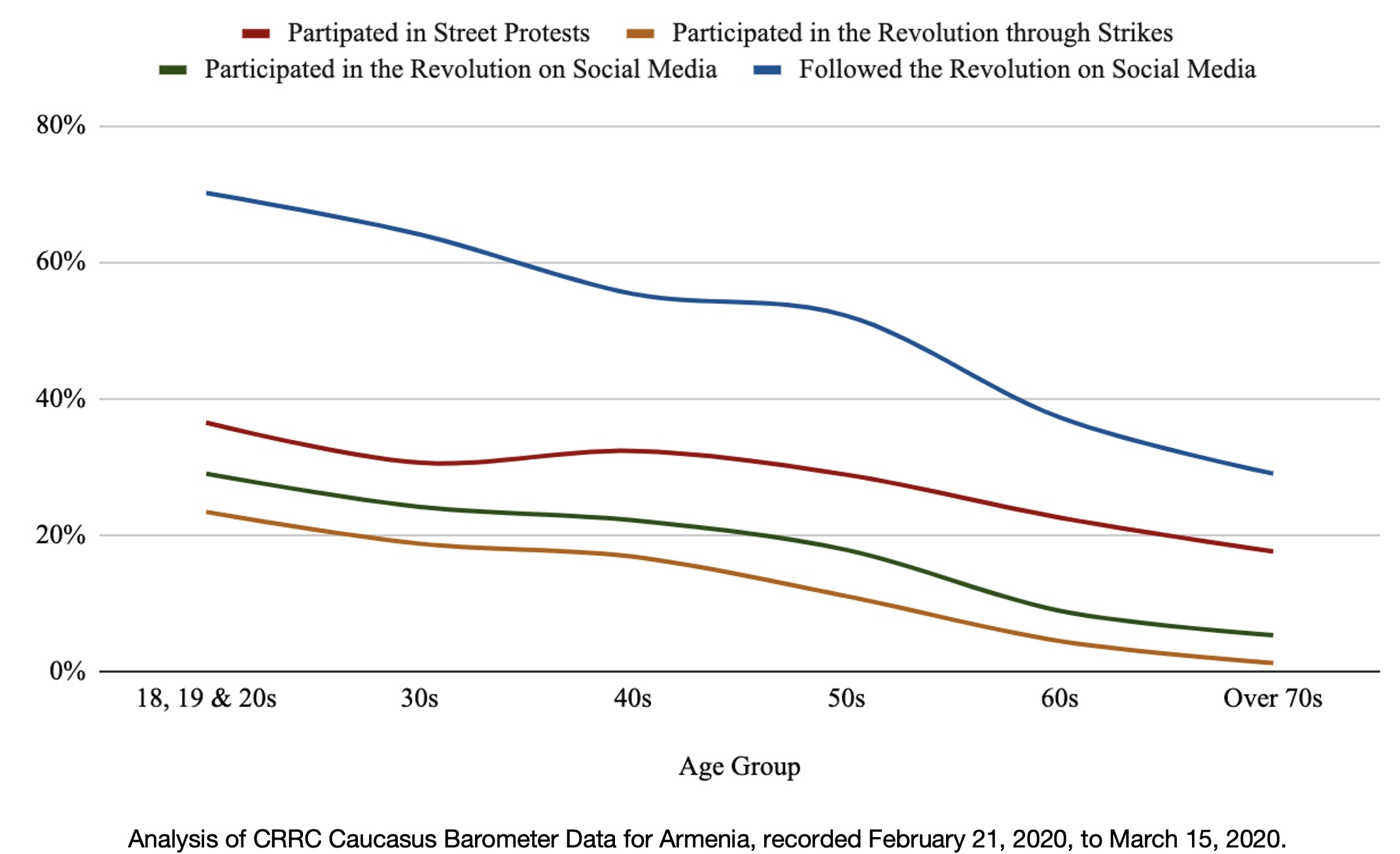 Approval of the government of Prime Minister Nikol Pashinyan, which came to power in the revolution, has stumbled. Despite still commanding a modest majority, his Civil Contract Party lost 11 seats in the 2021 elections. Many feel the country’s long-standing problems remain, and the war has only added to them.

Young Armenians consistently point to the economy as Armenia’s most significant problem. In the most recently published CB data from 2020, those between 18 and 25 were around twice as likely as the general population to say that corruption was one of the two most important issues facing the country; they also were considerably more inclined to identify “low quality of education” or “low wages.”

The 2020 war disproportionately affected young people. According to available data, the median age of an Armenian soldier who died in the conflict was just 23. In the first war between the two sides, in the 1990s, it was 29. 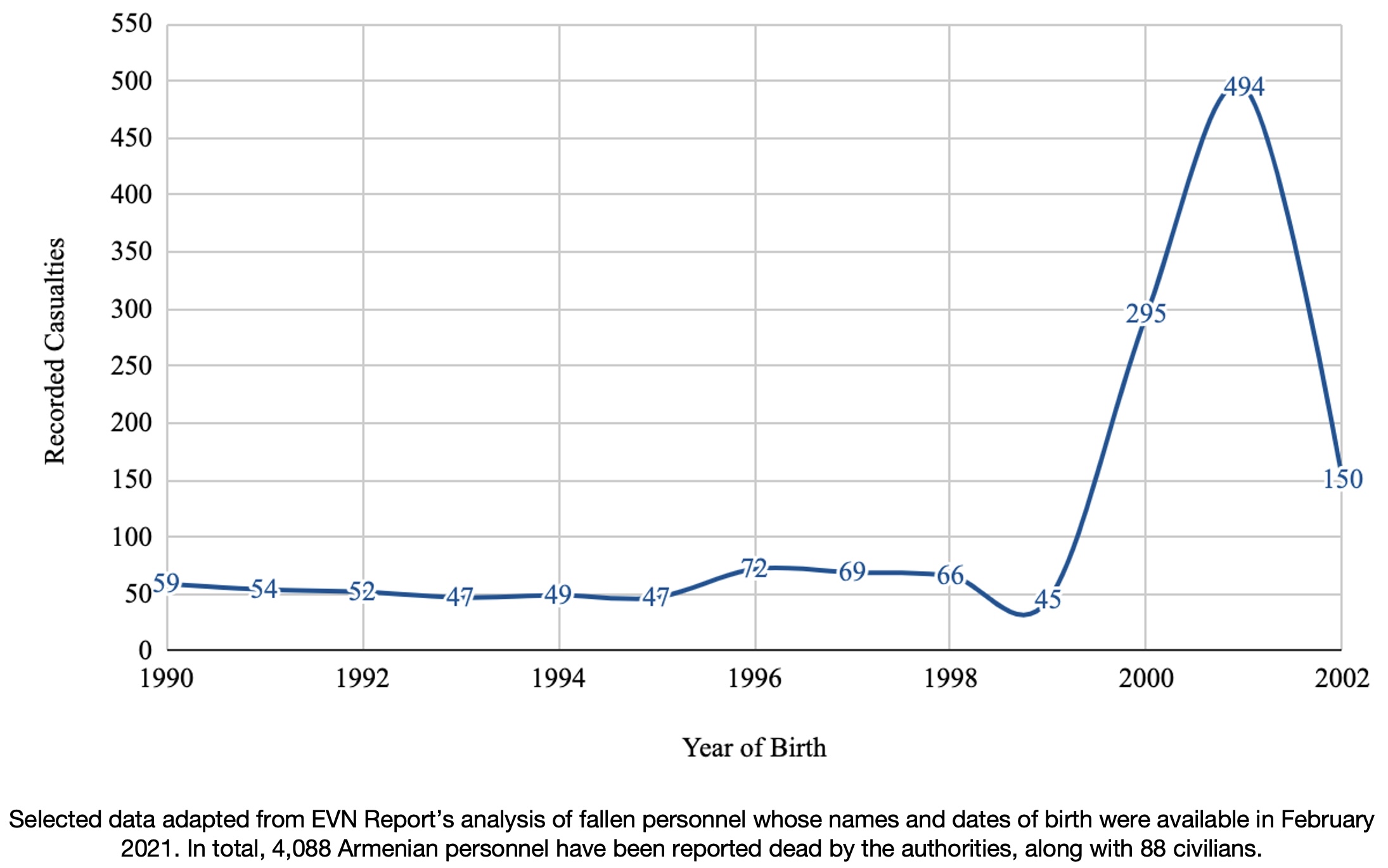 Still, younger people in Armenia’s heavily militarized society are consistently more likely to view the army in a positive light compared with other age groups, according to February 2021 survey data from the International Republican Institute. That survey found that 57 percent of 18- to 35-year-olds viewed the army in a “very favorable” light, compared with 47 percent of 36- to 55-year-olds and 43 percent of those 56 years and older. Meanwhile, 29 percent of 18- to 35-year-olds held a “very favorable” view of both the work of the police and the prime minister’s office, and 13 percent thought similarly of the work of the president’s office.

But there is reason to be skeptical of these numbers, given cultural taboos around criticizing the military. One man who spoke to me on condition of anonymity – someone who had himself served in Karabakh – revealed something that few would openly admit: He resented that the loss of the Armenian-occupied “buffer” around Nagorno-Karabakh was mourned more than the “kids sent to defend it.” These attitudes are seldom heard in public.

In their 2020 report, the LGBTQ+ advocacy group Pink Armenia found that homophobic and transphobic hate speech, including from elected officials and the media, largely goes unchallenged in Armenia. It also found that LGBTQ+ people were often characterized as “perverts,” as antipatriotic, or as pawns in anti-Semitic conspiracy theories involving George Soros. The tendency was particularly strong during the war, when LGBTQ+ people were seen as an “enemy within,” or otherwise the benefactors of a double standard (that is to say, they were perceived as receiving a level of compassion from the international community that was not extended to Armenia in its conflict with Azerbaijan).

CB data presents a generational divide. One question in the most recently published survey found that an overall majority of Armenians (over 90 percent of all age groups above 30) would not “do business with a homosexual.” Younger Armenians were increasingly unlikely to agree with that position, particularly in the capital, Yerevan: There, 75 percent of those between 18 and 29 said they would not “do business with a homosexual.” 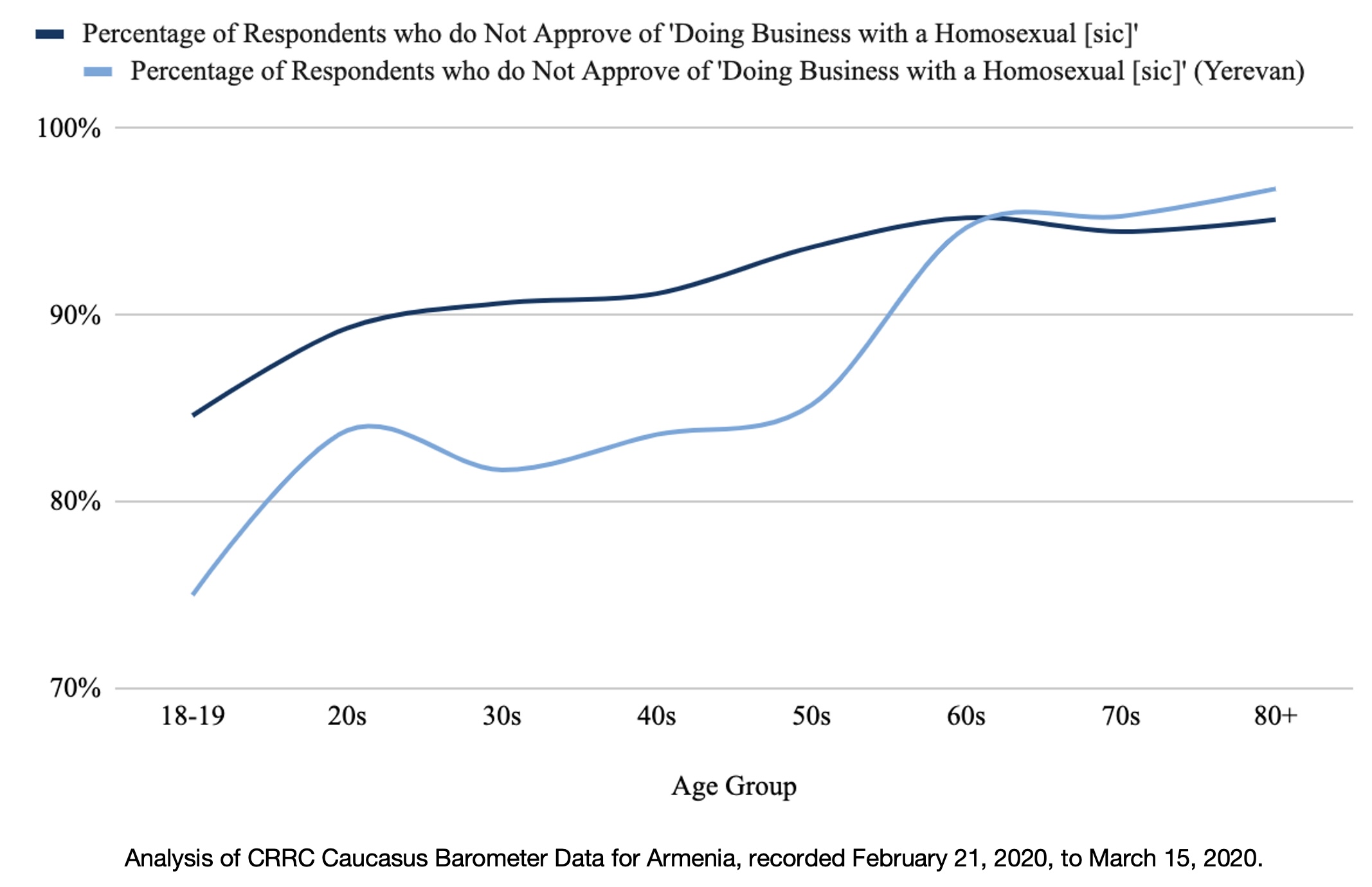 Chougher Maria Doughramajian, an LGBTQ+ rights activist who works with Pink Armenia, ascribed these differences to the fact that younger people more often speak English and are connected to the rest of the world. “LGBTQ+ people are frequently targeted and exploited by political parties for political gains,” she told me. “But today’s youth have more access to information through different media, as compared to their parents and grandparents.”

The most recently published CB data also show that people in their late teens and twenties are more likely than any other age group to approve of “women of their ethnicity” marrying any other given ethnicity. There are limits: only 10 percent of 18-29-year-olds would approve of marriage to a Turk. (When asked about Azerbaijanis – not shown on the graph below – that number was closer to 8 percent.) 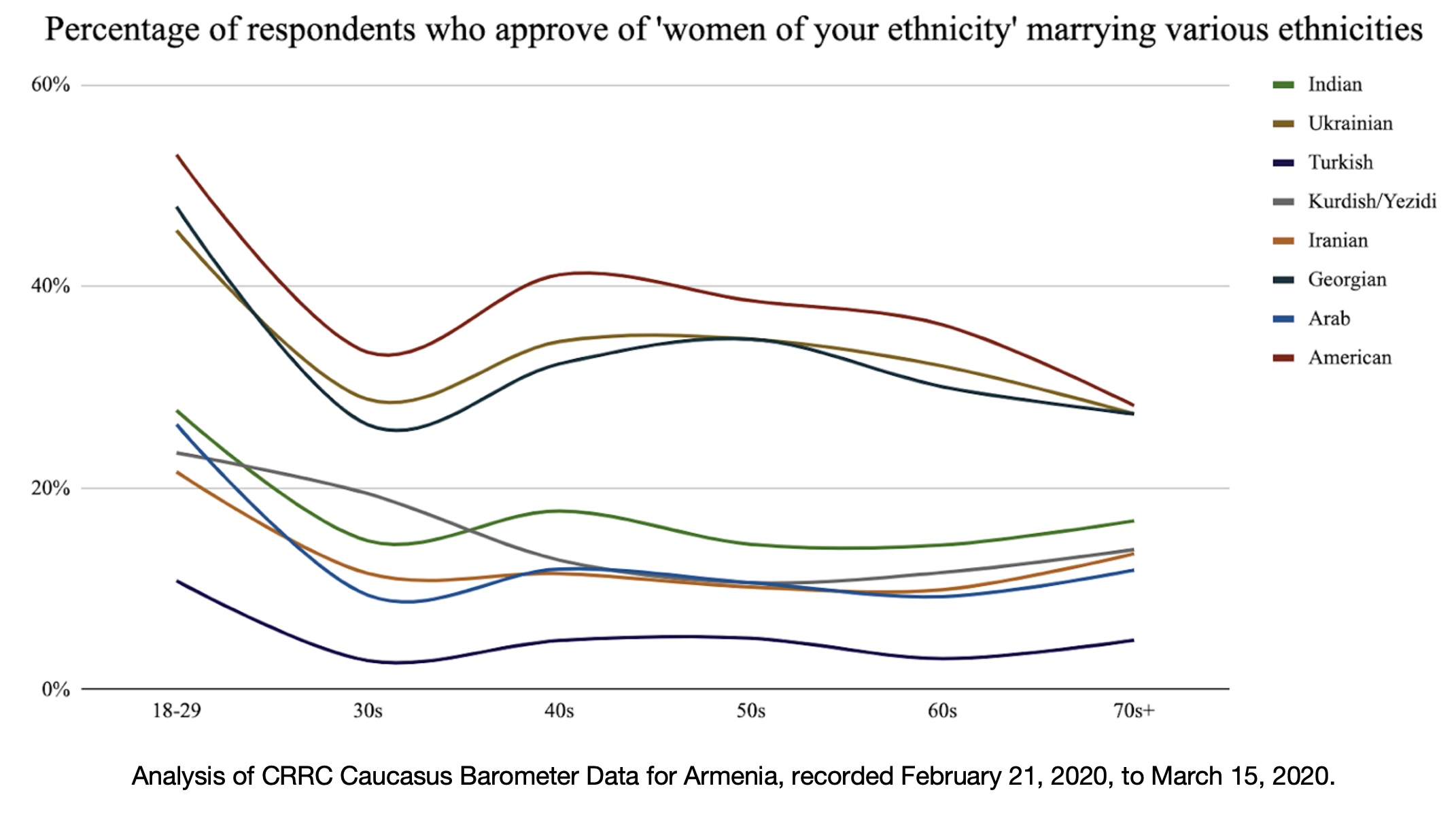 This is also a question that speaks to changing attitudes around women’s agency: Armenia’s women have long been seen as more equal in public life than the regional standard. The UNDP’s gender inequality index (which measures women’s education levels, representation in parliament, and labor force participation) placed Armenia 54th in the world in 2020, ahead of all of its neighbors.

But attitudes about women’s role in the family appear to be more traditionalist. A MeToo-style movement called “The Voice of Violence” was met with public skepticism and has struggled to change attitudes around not merely harassment and abuse, but empowerment and change more generally.

On the question of public participation in governance, Armenia’s youth are the first generation to grow up knowing only a post-Soviet state in which some semblance of a civil society exists. Their attitudes toward democratization, human rights, and popular engagement with politics are mixed.

But they were also around 6 percentage points more likely to have donated money to charity, with around 44 percent saying they had done so in the last six months. And 37 percent of the same age group reported “rather” or “fully” trusting NGOs compared with 28 percent of the wider population.

On matters of democratic participation, there was also a degree of promise: Young Armenians were very slightly (3 points) more likely to say they would “certainly” or “most probably” vote in a theoretical election held the next Sunday than the population as a whole.

When it comes to young Armenians’ geopolitical perspectives, they tend to take a pragmatic approach. CB data shows that among the 45 percent of 18-to-29-year-olds who “rather” or “fully” support membership in the European Union, 63 percent also “rather” or “fully” support membership of the Russia-dominated Eurasian Economic Union, the EAEU. (Among the wider population, 40 percent “fully” or “rather” support EU membership while 47 percent “fully” or “rather” support EAEU membership.) Russia and Europe both, after all, have a strong enough influence on modern Armenian life, and the data suggests that Armenians don’t see much point in picking a side. (The data were collected before Russia’s invasion of Ukraine last month, which has hardened regional views both favoring and fearful of Russia).

Given these age differences, do young Armenians resent their parents’ generation? We don’t have data on this question, but the young people have I spoken with said that, for the most part, they do not.

Tatevik, a university student, pointed out that her parents had grown up in an entirely different country, under a system with fewer alternatives. She recalled a conversation with her godfather in 2018 in which she expressed her disappointment with the outcomes of the revolution. He told her: “You may think that you did not succeed, but you proved to my generation that there is an alternative.”

She finds hope in that.

Edward Rhŷs Jones is a writer and researcher based in Yerevan, Armenia.

Caucasus Barometer data was provided by the Caucasus Research Resource Center. The author’s attitudes, opinions, and conclusions expressed in this article do not necessarily reflect the views of the CRRC Armenia.