Turkey’s president appears to be positioning himself as a protector of all Turks, including Azerbaijani Turks in Iran. 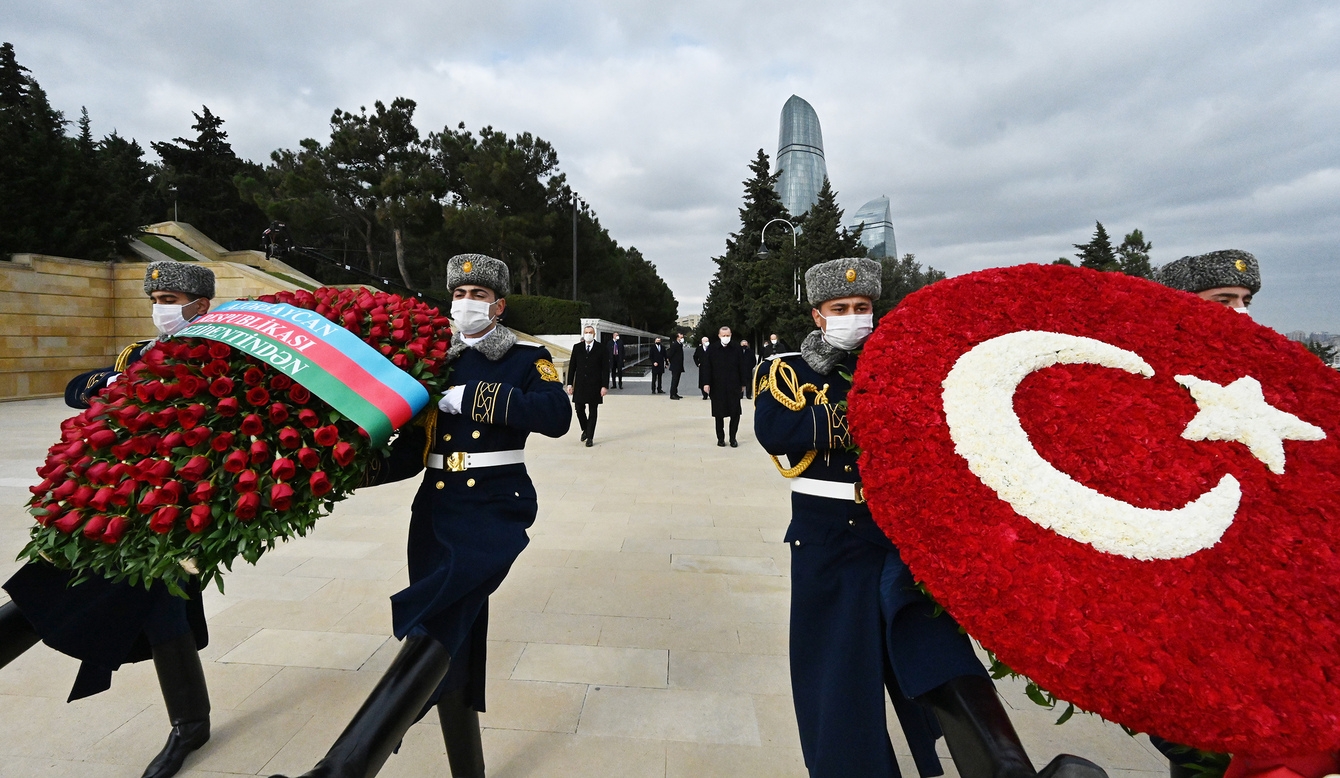 Azerbaijan and Turkey: On the march? (president.az)

As Azerbaijan celebrates victory over Armenia, its sponsor in the recent war has hinted he is seeking a broader regional shake-up. Turkey’s President Recep Tayyip Erdogan, during a military parade in Baku on December 10, recited a poem that Iran heard as a claim on its territory.

Iranian Foreign Minister Javad Zarif took to Twitter to scold the Turkish leader, calling modern Azerbaijan a territory “forcibly separated from the Iranian motherland” and accusing Erdogan of undermining Azerbaijan’s sovereignty. “No one can talk about our beloved Azerbaijan,” Zarif added. Iran’s Foreign Ministry, meanwhile, summoned the Turkish ambassador over Erdogan’s “interventionist and unacceptable” remarks. Iran’s parliament on December 13 adopted a motion condemning the Turkish president. Residents of Tabriz, the biggest of Iran’s Azerbaijani-speaking cities, reportedly demonstrated against him.

Erdogan has united Iranians of all ideological stripes.

The dispute dates back to two wars that Qajar Iran fought against the Russian empire in the early 19th century and which forced Iran to cede all its Caucasus territories.

A prevailing view in Baku is that the two empires conspired to divide their nation. This revisionism was first propagated by Soviet historiographers serving Moscow’s aim to “liberate” foreign lands. This is how the historically baseless concept of “South Azerbaijan” was born; there was no political entity known as “Azerbaijan” in the 19th century. Joseph Stalin even used the idea to occupy parts of northern Iran following the second world war.

After the Soviet collapse, independent Azerbaijan adopted the Soviet interpretation as a pillar of its national identity. President Abulfaz Elcibey in the early 1990s famously promised to march on Tabriz. While the Aliyev dynasty that assumed power in 1993 toned down the rhetoric, the notions of “South Azerbaijan” and a divided “Great Azerbaijan” are firmly entrenched in the nation’s political culture and psyche.

It is in this context that Erdogan’s remarks, delivered at a highly symbolic occasion, sparked outrage in Iran. Tehran was already uncomfortable with Turkey’s military and diplomatic support for Azerbaijan during the 44-day war over Nagorno-Karabakh. It feared Turkish involvement would encourage ethnic separatism in the Azerbaijani-majority regions in Iran. Even if Erdogan is simply ignorant of Iranian sensitivities, his speech heightened Iranian fears of a pan-Turkic threat.

Official websites in Baku neither reproduced the poem nor commented, opting to stay out of the spat. While President Ilham Aliyev is indebted to Erdogan for his military aid, he also carefully managed relations with Tehran during the war. Others have not been so reserved. Ilgar Mammadov, a former political prisoner who has avidly supported the war, tweeted that Erdogan’s speech “hints that a comprehensive solution to the regional security equation here may be found soon by dismembering Iran.” Though not voiced by the government, such views – a direct result of the foundational myth of “South Azerbaijan” – are not uncommon.

Baku finds its shared heritage with Iran difficult to manage. The government has proffered the notion in recent years that the Turkic origin of several Iranian dynasties, like the Safavids and Qajars, makes a large part of Iran historically “Azerbaijani.” Since Soviet times, Baku has claimed the 12th century poet Nizami Ganjavi as exclusively Azerbaijani. Though Nizami lived on the territory of modern-day Azerbaijan, he wrote in Persian.

Tehran generally ignores these irritants, concentrating its energies on challenges in the Middle East and Persian Gulf.

Erdogan’s provocative speech and growing power inside Azerbaijan may, however, be a step too far for Iran. He appears to be positioning himself as a protector of all Turks, including Azerbaijani Turks on both sides of the border. This fits into his expansionist foreign policy, which in recent years has provoked problems with most of Turkey’s neighbors.

Hubris is no substitute for sound statecraft, however.

Among the many historical references Erdogan made in his speech was, ironically, one dedicated to Enver Pasha, a late Ottoman adventurer, and his “Army of Islam” that briefly invaded Baku in 1918. Erdogan did not mention Enver Pasha’s inglorious end, however: on a military campaign in Central Asia in pursuit of quixotic pan-Turkish dreams.