The militant group may be plotting to undermine faith in the Taliban's ability to secure the country's borders. 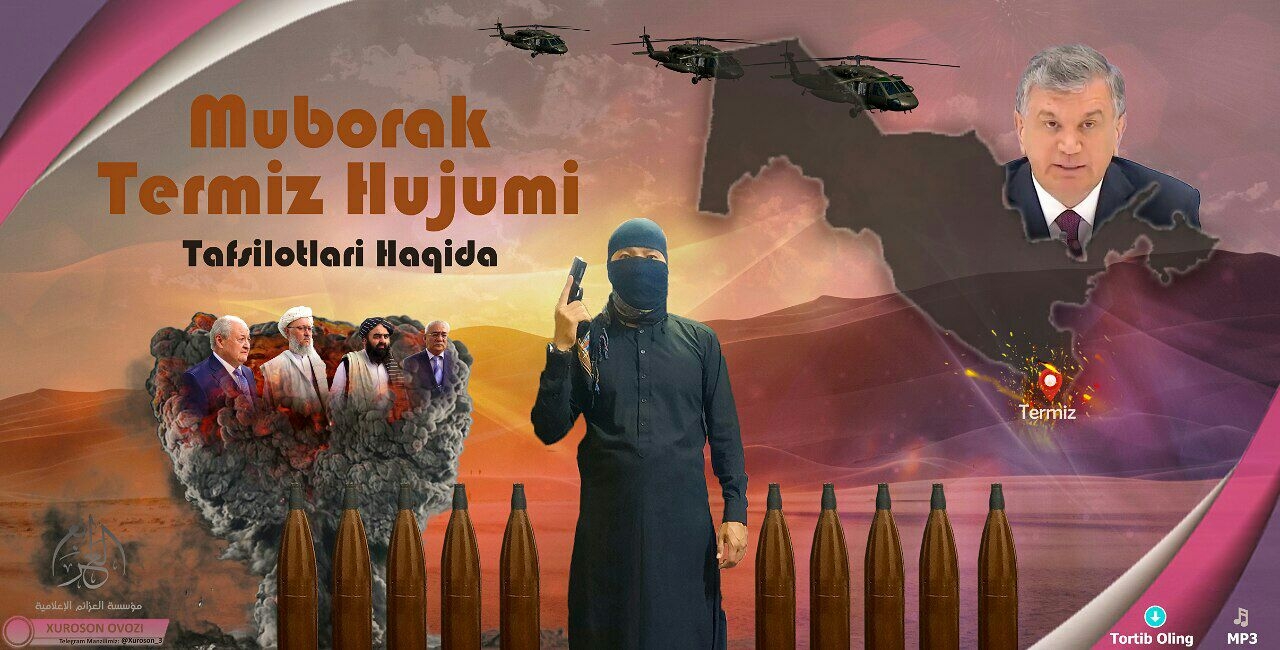 Militant propaganda is singling out the Uzbek government for particular venom.

Following a brief interlude of confusion and statements of denial, a representative of the Taliban regime in Afghanistan finally admitted that militants affiliated with the IS Khurasan Province group, known as ISKP, on April 18 fired a barrage of rockets toward Uzbekistan.

Uzbek officials insisted nothing had landed on their territory, which suggests the operation was of largely symbolic value. The attack nevertheless marks a clear escalation by ISKP from just hostile anti-Uzbek government rhetoric to direct militant action.

In a statement claiming responsibility for the attack, Amaq, the official news agency of the Islamic State group, asserted that 10 Katyusha rockets had been directed toward a military position near the city of Termez. The group also released a photo of the perpetrator and a video of the alleged launch. ISIS’s weekly al-Naba newsletter followed up by detailing how the projectiles were fired from Afghan territory.

The operation was also the first reprisal attack in the new IS spokesman Abu Umar al-Muhajir’s call to violence against the movement’s enemies dubbed “The Raid to Avenge the Two Shaykhs.” That campaign has now extended to operations in at least 11 countries.

The impact in the case of this Uzbekistan assault may be primarily centered on optics.

ISKP seeks to undermine regional confidence in the Taliban’s ability to provide stability and prevent Islamic State forces from using Afghan territory to launch attacks against neighboring countries and beyond. The attack furthermore indicated that ISKP has a presence in Afghanistan’s Balkh province, potentially enabling them to strike or cross into Uzbekistan. This creates increased security concerns for the Uzbek government and may arouse perceptions of a heightened militant threat. It has also been posited that such operations could be attempts to bait neighboring states into intervening so that ISKP might exploit the resultant chaos.

There were several warning signs leading up to the incident. Among them were the proliferation of Uzbek and Central Asian language pro-Islamic State Telegram channels, criticism directed by outlets at Tashkent and its relations with the Taliban, and a bolstered and increasingly internationalized ISKP recruitment and incitement campaign that is partially aimed at ethnic Uzbeks in Afghanistan, Uzbekistan, and elsewhere in the region.

Shortly after the Termez attack claim was published, pro-ISKP Uzbek and Tajik language Telegram channels, including the Uzbek group Lessons of Creed, began posting translations of the statement. The Uzbek channel Tawhid News issued a photo of the attacker along with the video and a map marked with the location of the supposed attack, Termez, circled in red. The Tajik channel Daily News of the Mujahideen of the Caliphate published a Tajik translation of the claim with the official logo of the Al-Azaim Foundation, which is the designated branch media outlet of ISKP. Another Tajik channel, The Army of the Victorious Sect, issued a four-minute audio message in Uzbek, allegedly from militants from Afghanistan, commenting on the attack.

Tawhid News also released a 24-minute-long Uzbek-language audio statement titled “The blessed attack of Termez,” which was translated by jihadism expert Uran Botobekov. The message declared that the rocket attack against the “apostate Uzbek government” marked the beginning of the Islamic State’s “great jihad to Central Asia.” It also asserted that the unfolding project to build a railway link from Uzbekistan to the northern Afghan city of Mazar-i-Sharif through Kabul to Pakistan’s sixth-largest city, Peshawar, is nothing but a scheme cooked up by apostates to spread democracy to Khurasan. The mujahedeen, or Islamic holy warriors, would resist it, they said.

This explicit threat to target regional infrastructure should trouble more than just Uzbekistan, which has been perhaps the most enthusiastic champion of that railroad initiative. Neighboring Turkmenistan is now working hard to finally make headway on the trans-Afghan TAPI natural gas pipeline, a project that it sees as essential toward diversifying the client base for its most important export commodity. The self-styled Islamic Emirate of Afghanistan has pledged that it intends to form an armed division of up to 30,000 fighters to ensure TAPI’s safety.

The Tawhid News audio statement’s promotional banner likewise featured the Al-Azaim Foundation logo and allusions to Uzbek President Shavkat Mirziyoyev, Uzbek Foreign Minister Abdulaziz Komilov, Abdul Salam Hanafi, an ethnic Uzbek and the Taliban’s Deputy Prime Minister, Taliban Foreign Minister Amir Khan Muttaqi, and Ismatulla Irgashev, the special representative of the president of Uzbekistan to Afghanistan. Publishing visuals of interactions between some of these officials is in line with an established ISKP propaganda tactic of highlighting ties between the Taliban and foreign states as way to advance the argument that the new Afghan rulers are friendly to “apostate” governments and the perceived enemies of Islam.

One day after that audio message was circulated, Tawhid News published a new poster impugning Uzbekistan’s government, describing the country’s political leadership as slaves of the United Kingdom, Russia, and Turkey, and accusing the government of worshipping the “idol of nationalism” instead of Allah.

From an operational perspective, it is significant to consider that while ISKP already had a presence in northern Afghanistan, given the recent attacks in Kunduz and Takhar provinces, this is the first claim of activity in Balkh province in at least three years. Moreover, it was followed three days later by a devastating attack in the provincial capital of Mazar-i-Sharif, indicating increased activity in the area.

There have been other developments of possible relevance to Central Asia.

During a recent campaign of bayah, or pledge of allegiance, from self-styled Islamic State provinces following the appointment of the group’s new leader, the Amaq news agency released a video attributed to ISKP claiming to have a cell located in an area designated as Bilad Ma Wara al-Nahr. This name is typically read as synonymous with the term Transoxiana, a geographic region that includes swathes of modern-day Tajikistan and Uzbekistan. It is not possible to say if the cell is purporting to have a presence in one of the two states, however. The main speaker in the video is named only as Omar Kunduzi, hinting at a presence in the northern part of Afghanistan.

Riccardo Valle is director of the terrorism research department at the Italian think tank Analytica for Intelligence and Security Studies and a subject-matter expert at the University of Trieste.