ISKP is reaching out to minorities in Afghanistan and their ethnic cousins in post-Soviet Central Asia. 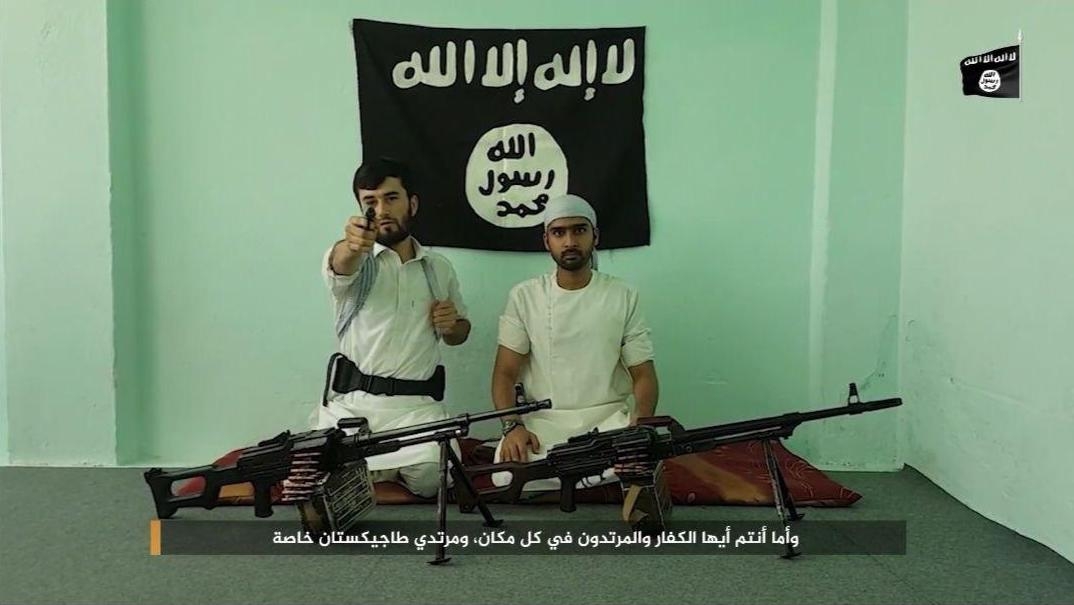 "And as for you infidels and apostates everywhere, and apostates of Tajikistan in particular..." (Islamic State video screenshot, subtitle in Arabic)

The Islamic State is trying to broaden its appeal in Central Asia. The group’s Afghanistan branch has recently ramped up the production, translation, and dissemination of propaganda directed at Uzbek, Tajik, and Kyrgyz speakers in the region.

This push comes as part of an information campaign to delegitimize Kabul’s new Taliban government as a Pashtun ethno-nationalist organization rather than a bona fide Islamic movement. Accordingly, Islamic State Khurasan Province (ISKP) sees an opportunity to exploit areas of tension between the Taliban and different ethnic groups that may feel marginalized, while seeking to inspire attacks further afield in Uzbekistan, Tajikistan, and Kyrgyzstan.

Since 2015, ISKP has been developing an internal media infrastructure targeting speakers of different languages inside Afghanistan and beyond. ISKP received a boost that year when the remaining members of the Islamic Movement of Uzbekistan (IMU) reportedly pledged allegiance to the Islamic State and renounced their Taliban ties.

Al-Azaim, ISKP’s dominant media organ, has begun publishing in Central Asian languages. For example, since February 1, Al-Azaim has published two books in Uzbek including a long text slandering the Taliban as slaves of China, Russia, the U.S., Pakistan and Turkey; both appear in the Latin alphabet used in Uzbekistan. It has released at least 15 audio recordings in Uzbek.

ISKP strategists also appeal to an Uzbek audience by republishing audio lectures by IMU song writer and ideologue Asadulloh Urgenchiy. Some of the segments on Telegram have been translated into Tajik and Kyrgyz. While Urgenchiy is reportedly dead, ISKP propaganda depicts him as a charismatic religious authority, pointing to his roots in Urgench in western Uzbekistan and building him up as an icon for Uzbek nationals.

In the Tajik Cyrillic used in Tajikistan, Al-Azaim earlier this month released a book, “Why Jihad is obligatory.” The religious text criticizes movements that claim to fight for jihad but, according to the author, are instead “apostates,” pointing to the Free Syrian Army, the al-Hashd al-Shabi in Iraq, and the Taliban in Afghanistan.

In the last few months, the Uzbek-language Xuroson Ovozi (Voice of Khurasan) group on Telegram has begun translating and publishing official statements from senior ISKP operatives. One, entitled “We are the People of Action!” by spokesman Sultan Aziz Ezzam, justified the killing of three female Afghan journalists and called for attacks inside Afghanistan. On Telegram, the Aqida Darsliklari network frequently publishes Uzbek-language sermons on jihadi doctrine and methodology under the Al-Azaim Foundation banner. The use of the Latin alphabet underscores how these statements are designed to be read by Uzbekistanis.

Most recently, Xuroson Ovozi published the translation of a statement from Al-Azaim media team pledging allegiance to the new IS leader Abu al-Hassan al-Hashemi al-Quraishi, alongside other IS-linked media groups around the world. This week Al-Azaim published a Tajik version of the statement.

Just before it fell in August, the Afghan republican government confirmed it was holding several dozen ISKP-affiliated militants from Central Asia. On May 3, 2021, then-intelligence chief Ahmad Zia Seraj said that of 408 such prisoners, including women and children, 15 percent hailed from Uzbekistan, Tajikistan and Kyrgyzstan. Some likely escaped and rejoined ISKP when the Taliban freed roughly 2,000 prisoners at the time it seized Kabul.

Since then, ISKP has increased operations in northern Afghanistan, according to our research, which is based on claims made in the Islamic State’s official weekly al-Naba newsletter. These areas are largely populated by Uzbeks and Tajiks – ethnic groups largely shut out of the Taliban government. Since August 15, ISKP has claimed five attacks in Kunduz province and four in Takhar province. Both provinces border Tajikistan, where the government often blames Islamic State for sporadic outbreaks of violence.

Without a doubt, the spread of ISKP propaganda should worry Central Asian governments, who have never been targeted by the Taliban.

A video published last year shows ISKP militants assaulting a prison in the eastern Afghan city of Jalalabad. Among them was a young Tajik who threatens the government in Dushanbe, which he calls “taghuti” – a word meaning tyrannical, with implications of apostasy and idolatry. He namechecks President Emomali Rahmon, one of the world’s longest-sitting autocrats.

Riccardo Valle is director of the terrorism research department at the Italian think tank Analytica for Intelligence and Security Studies and a subject-matter expert at the University of Trieste.