Kyrgyzstan’s radio waves are a stage for twisting and pulling at the notion of national identity. 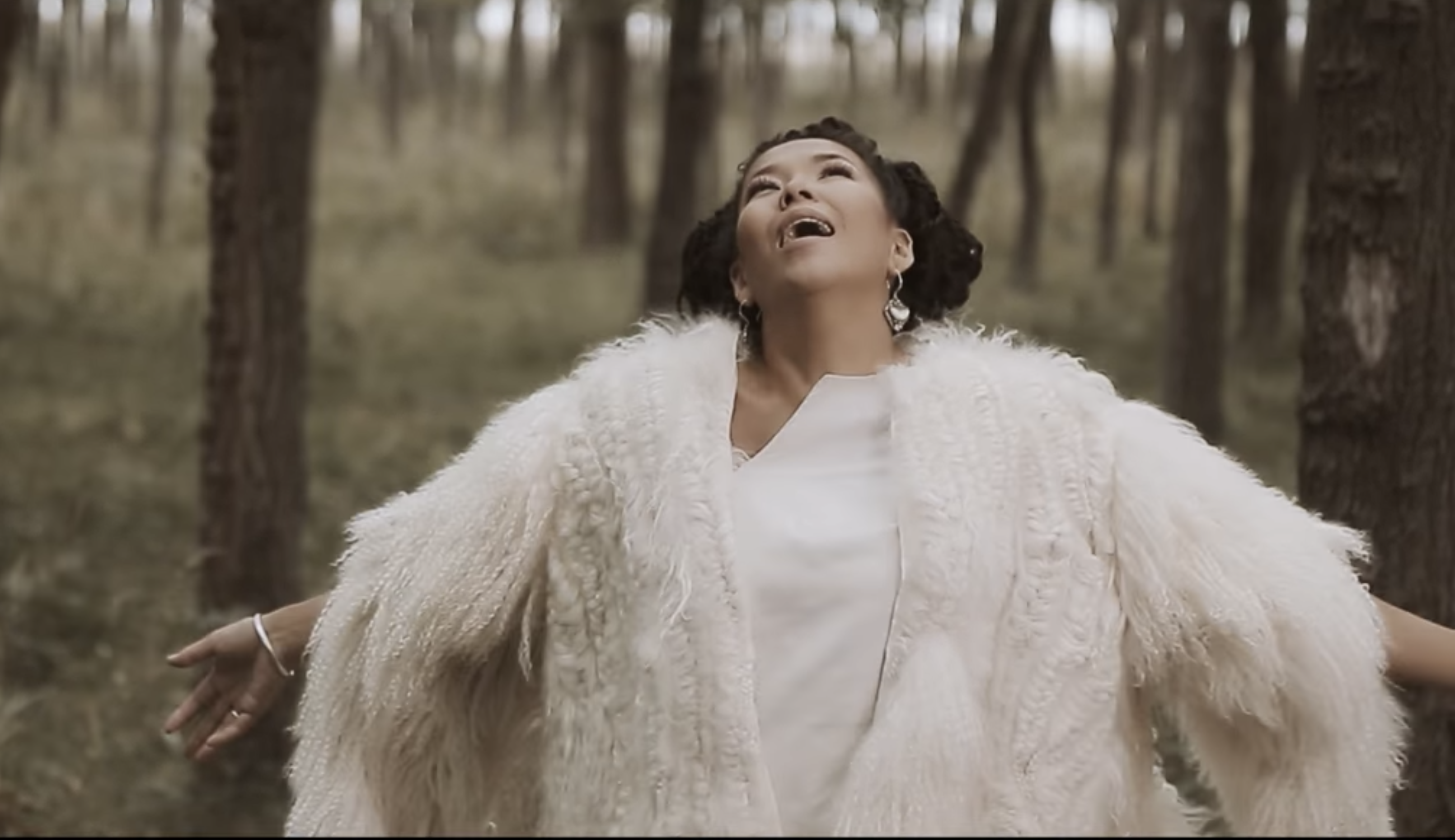 Weaving tradition and history, myth and fact, the Manas epic is a key symbol of Kyrgyzstan’s cultural identity. Manaschys, the storytellers who perform the half-million-line poem, wave their hands and sing; they chant, yell like a spirit has entered their body. These men – and it is almost always men – are well-respected, widely seen as embodying Kyrgyz identity and history.

When pop singer Gulzada Ryskulova unveiled her new song “Aikol Manas” (Benevolent Manas) at the 2016 World Nomad Games, she invoked the spirit of a manaschy against a backdrop of mountains, yurt camps and galloping horses. The energy of Ryskulova’s song and performance was infectious: Thousands of people in the stands cheered and bobbed their heads in time with the dancers on stage imitating a manaschy’s classic hand gestures.

Ryskulova is not the only contemporary pop star drawing inspiration from Kyrgyzstan’s nomadic heritage or traditional music. Kyrgyzstan’s radio waves are a stage for twisting and pulling at the notion of national identity, despite foreign music’s influence over what’s considered cool. Today, popular musicians are expertly navigating a multiethnic and multilingual context to define what it means to be Kyrgyz (a member of the ethnic group) and Kyrgyzstani (a citizen of Kyrgyzstan).

Mirbek Atabekov is one of these artists. Atabekov’s 2015 hit “Molmolum” (My Maple Tree) was adapted from a poem written by Barpy Alykulov in the early 1900s. Alykulov was an akyn, a performer who improvises poems about love, patriotism, family and war while strumming on a fretless, three-stringed komuz. It’s lucky that akyns still perform today, as decades of restrictive Soviet policies left the akyns’ art in danger. A recent resurgence of interest in folk arts and popular adaptations of famous akyns’ poetry have helped revive the tradition.

Atabekov took this revival further by remixing one of the best-known Kyrgyz love songs into a pop chart-topper.

Kyrgyz language and culture have not always enjoyed this respected status, however. What is now Kyrgyzstan was first incorporated into the Russian Empire in 1876. After Soviet power was established in 1919, and despite Vladimir Lenin’s pluralistic view of multilingualism and firm belief in the equality of all languages, Russian came to be the dominant language in government, science, and professional spheres, something that has been hard to shake since independence. Even after 25 years, and despite language laws meant to prioritize Kyrgyz, Russian still predominates in Central Asia’s urban, cosmopolitan spaces.

Pop culture has been no exception, with Russian music video channels streaming on satellites and many local artists recording in Russian. The attitude that Russian cultural products are inherently superior reflects what social scientists call diglossia. Unlike bi- or multilingualism, where a community fluidly speaks more than one language, diglossia describes the phenomenon when two languages spoken in one community are characterized by “low” and “high” usage. In Kyrgyzstan, Kyrgyz has often been considered colloquial, base; Russian, on the other hand, is typically framed as sophisticated and superior.

Across the border in Kazakhstan, Fulbright scholar Valentina Michelotti has explored diglossia’s impact on Almaty’s music scene. Her sources describe Kazakh-language music as something made by and for mambeti – rednecks. Indeed, she finds that many of the state-driven strategies for promoting Kazakh as a language of pop culture haven’t taken hold.

That’s where pop culture plays a role. In 2016, Kyrgyz rap duo Begish and Bayastan released “Ene Til” (Mother Tongue). Although the song isn’t as popular at weddings as Atabekov’s tunes, “Ene Til” made ripples around Kyrgyzstan’s bigger cities. The two sing, “This is my song, my mom’s too / The listeners’ and yours / It’s the song of the woman who taught our Kyrgyz classes / These words are my motherland’s / These words are my mother’s / They’re this life’s and yours / Those of the woman who taught you Kyrgyz / These rich words are the Kyrgyz people’s.” The chorus assures the listener that Kyrgyz can be everyone’s language, a message reinforced by several non-ethnic Kyrgyz people lip-synching in the video. The lyrics are just as intense and patriotic as the clumsy Anthem of the National Language, but the song is smoother listening.

Begish explores and constructs Kyrgyz identity in his other work, such as a collaboration with Bishkek-based rapper Belyi on “Jigit,” a song that considers what it means to be a jigit – an honorable young man, originally a brave equestrian – in contemporary Kyrgyz culture. In the song, Begish laments that today’s jigits aren’t like those of the past. Meanwhile, Belyi, who is ethnically Russian, demands respect from his fellow countrymen. He makes a claim for jigit status in flawless Kyrgyz, “Those who call me Russian / Don’t be angry with me when you find out / I speak Kyrgyz better and have always behaved appropriately.” After his verse, Belyi switches abruptly to Russian, “Begish, tell them who’s here – I was born here!”

“Jigit” creates an image for Kyrgyzstan’s future where the country’s Russian-speaking population is not assumed to be monolingual and Kyrgyz can be a medium for trendy music.

Kyrgyzstan’s pop stars have shown that identity formation is a complex process, one that’s not limited to the legal status of a language, or to politics. By blending musical trends from the West with traditional Kyrgyz themes, local artists are playing with the idea of Kyrgyz(stani)ness and churning out chart-toppers in the meantime.

Colleen Wood is a PhD student in political science at Columbia University. She was a Peace Corps volunteer in Kyrgyzstan.