Already an empty shell, Russia’s Constitution now stands to become a fully fictional document, much like the Soviet version. 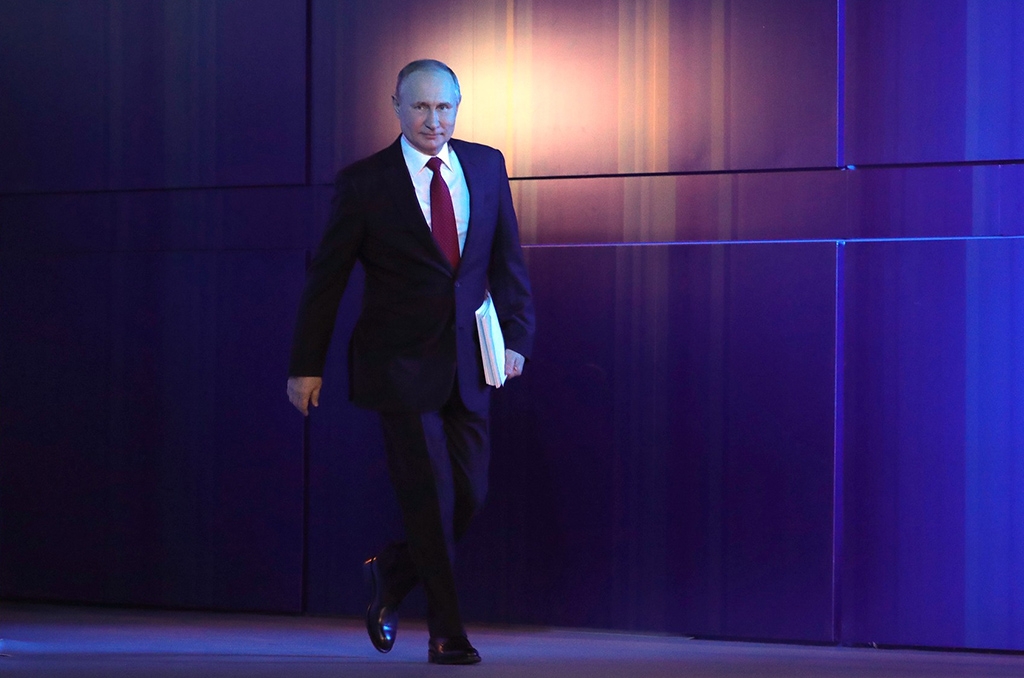 Man with a plan (Kremlin.ru)

In trying to make sense of President Vladimir Putin’s moves to overhaul Russia’s leadership structure, political analysts have tended to focus on the near-term implications for his ability to retain power. But the pending changes seem also to have been crafted with an eye toward ensuring Putinism survives after Putin.

With his sudden and largely unexpected January announcement of constitutional changes, Putin clearly wants to bring closure to the upheaval that surrounded the collapse of communism in 1991. Under his plan, the liberal core of the country’s Basic Law is being neutered, while the “mock constitutionalism” of the last 20 years is progressively morphing back into something resembling the Soviet era.

Eventual adoption of the amendments is a foregone conclusion. Lawmakers unanimously approved them in the first reading. A second reading is scheduled this month, while a referendum to legitimize the changes is expected in May.

We are witnessing vintage Putin, a special operation whose ultimate goal is known only to a tight Kremlin circle. Most observers have focused on the link between the constitutional reform and the so-called “2024 problem” – a political transition after the end of Putin’s fourth and supposedly final presidential term. At the moment, however, the proposed shake-up of the Basic Law provides only a very dim picture of Putin’s possible strategy to hold power after 2024. A number of options are on the table, with some experts arguing that ultimately Putin may simply choose to remain president indefinitely.

Political (and physical) survival is not Putin’s only preoccupation. No less important, and linked to the issue of his own fate, is the question of the political legacy of the system that he has shaped throughout his two decades in power.

Both the political system of contemporary Russia and its Basic Law are an outgrowth of the anti-communist revolution. The adoption of the 1993 Constitution was meant to symbolize a clear break with the Soviet past; it signaled that Russia at that time was ready to embrace liberal values and embark on the path toward a genuine law-based, representative system of government.

At the same time, the new Constitution was introduced amid an acute political crisis in Moscow that ended in the bloody suppression of “anti-reformist” forces in October 1993. Further, Western-style liberal ideals that were placed at the heart of the document seemed to be only vaguely familiar, if not downright alien, to the overwhelming majority of Russians.

The circumstances of the Constitution’s birth explain the main contradictions in its text. As some legal scholars noted early on, the inherent contradiction between the Constitution’s liberal core and the notion of “super presidentialism” opened up two ways of interpreting constitutional norms: a liberal one and an authoritarian one. The fact that the latter ultimately triumphed was not so much predetermined by the Constitution’s emphasis on an executive presidency as it was by specific socio-political features of Russia’s post-communist development. There were not any institutions in the early 1990s that could place checks on an imperial presidency: the weakness of parliamentarism and of political parties, along with the feebleness of civil society, enabled the perpetuation of a system of autocratic personalist rule.

Significantly, while Russia’s Constitution for a long time stayed unchanged, the country’s political regime changed a great deal, evolving from a combination of chaotic democracy and soft authoritarianism in the 1990s to full-blown authoritarian rule under Putin. Since the early 2000s, the Kremlin has assiduously suppressed pluralism and tightened control over the judiciary, while amassing power in the hands of the president and agencies directly subordinate to him.

It’s worth noting that, to date, the concentration of power in the president’s hands has been accomplished without significant changes to constitutional provisions.

It’s reached a point, however, that the Kremlin appears intent on finally burying the memory of Russia’s post-communist dalliance with liberalism, as embodied in the 1993 Constitution. Taken as a whole, Putin’s amendments undermine the basic principles of Russian state structure and the constitutional rights of Russian citizens.

Of course, Chapters 1 and 2 of the Constitution – where individual rights are enshrined, and which are protected from alteration by a special constitutional provision – are to remain untouched. Nevertheless, the announced amendments directly contradict those first two chapters. Among the most egregious legal innovations are the removal of the priority of Russia’s international obligations, the destruction of the autonomy of local self-government, and further encroachments on the judiciary’s independence.

A number of leading Russian constitutional law experts, including Viktor Sheinis, Andrei Medushevsky and Mikhail Krasnov, have characterized the past 20 years in Russia as a period of “mock” constitutionalism – a situation in which the Constitution formally remains unchanged but in practice political leaders grow less and less restrained by legal institutions.

Putin’s amendments can be considered the natural conclusion of mock constitutionalism. Already an empty shell, the Constitution now stands to become a fully fictional document, ushering in a new era of “nominal” constitutionalism. The situation will closely resemble the Soviet era, when constitutional principles and norms were completely detached from reality.

In the end, Putin’s amendments can be seen as Russia’s version of 18 Brumaire, the coup in 1799 that paved the way for Napoleon’s rise to unrivaled power. (It’s notable that the 18 Brumaire coup culminated with the adoption of Constitution of the Year VIII under which the First Consul appointed the Senate and the Senate interpreted the Constitution. The latter was also the first constitution since the 1789 Revolution without the Declaration of Rights). Putin’s political system is entering its final stage – one that in comparative historical perspective is typologically similar to the Bonapartism of the First and Second French Empires.