Perspectives | On the importance of being Soviet

The mixture of people you find in Kazakhstan testifies to one of the Soviet Union’s most enduring legacies. 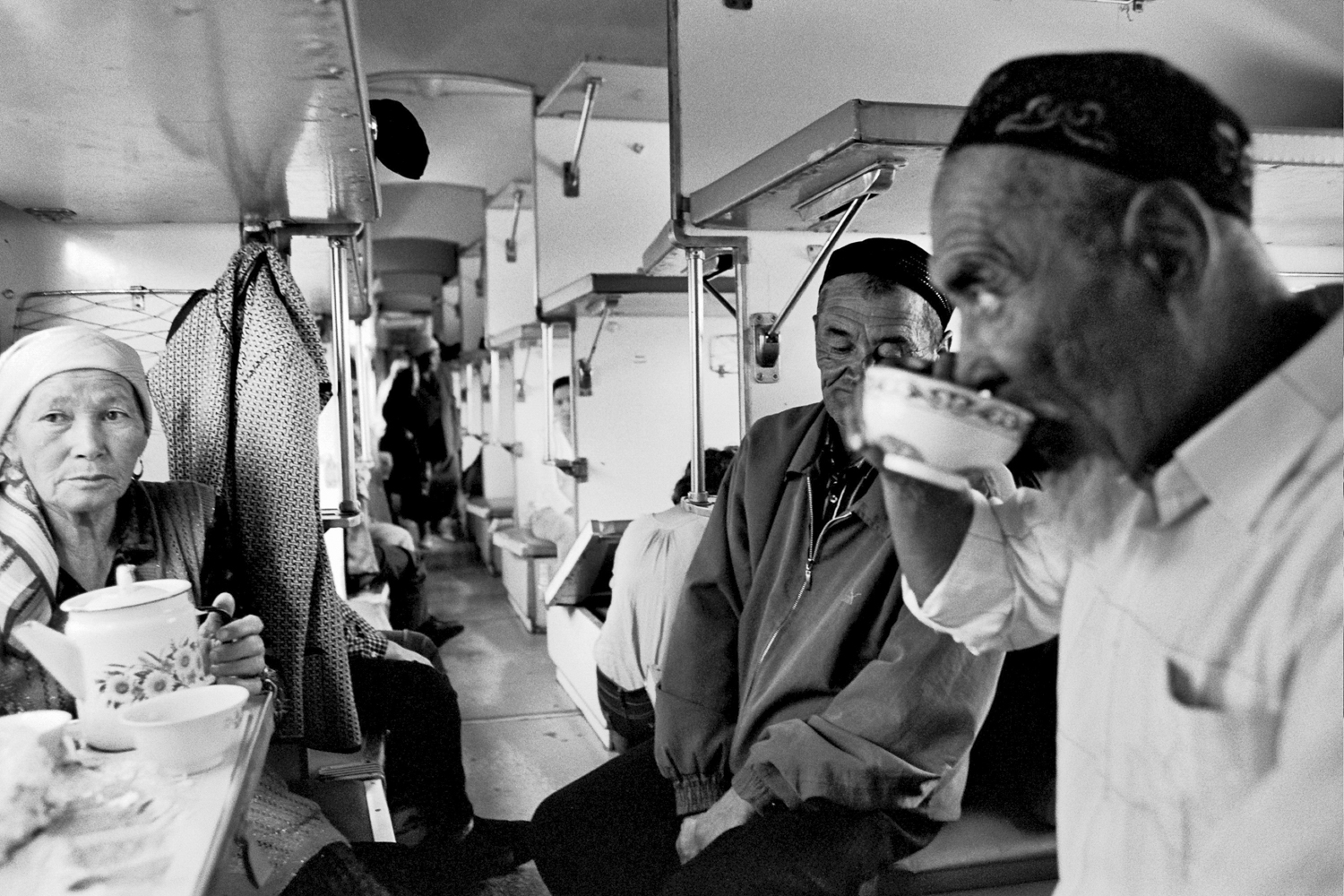 on the train near Kyzylorda, Kazakhstan (David Trilling)

Travelling one evening on the train from Astana to Almaty in Kazakhstan, I got chatting with the other three people in our four-berth compartment. This kind of enforced sociability is often a joy of travelling in the former USSR. On this occasion my travelling companions were a young Russian man, a young Kazakh woman, and a grandmotherly figure whom I also took to be Russian.

When they discovered I was British, the Kazakh woman announced that her great-grandfather had been an Englishman. At first I was skeptical, but she explained that he had been an engineer working in the oilfields around Guryev (modern Atyrau) before the revolution, had married and remained after the Bolshevik takeover, and then been purged in the ‘30s. There was nothing implausible about this story – lots of foreign engineers worked in the mines and oilfields of the Kazakh steppe in the last years of tsarism.

This got us talking about ancestry, and the extraordinary mix of peoples in Kazakhstan. This was personally important for all of them – the Russian man was married to a Kazakh, the elderly lady whom I had thought was Russian had a German father and a Tatar mother. The Kazakh woman with the British great-grandfather was married to a Chechen. Here in microcosm was the diversity produced by two decades of deportations to Kazakhstan, and by migration to the Virgin Lands scheme which followed, what in Soviet times was known proudly as the “planet of 100 languages.”

In one sense that term is misleading. We were all speaking in Russian. Most of the different peoples deported by Stalin to Kazakhstan and elsewhere in Central Asia – Poles, Germans, Latvians, Lithuanians, Koreans, Crimean Tatars – had become Russian-speaking within a generation if they were not so already. However the diversity expressed in the idea of 100 languages is real. When the Kazakh poet Olzhas Suleimenov gave a famous speech in Semipalatinsk in 1989, announcing a movement against nuclear testing nearby, he made the point that the terrible effects of 30 years of tests on the local population could not be called a “genocide,” because that referred to the extermination of just one people. In Semipalatinsk radiation was killing “every one of the 100 nationalities of which we were so proud.”

Northern Kazakhstan is perhaps an extreme example of the ethnic and cultural hybridity that could be produced by Soviet rule, but similar blended identities are common from the Baltics to the Caucasus to the USSR’s great cities – Baku, Kiev or Tashkent. The Soviet Union was a high modernist project, which sought not just to sustain superpower status through economic development, military might and internal repression, but to create a new type of human being – Homo Sovieticus, “Soviet Man.”

The meaning of this is slippery. The official version was that “Soviet Man” would transcend petty divisions of nationality, class and politics as the different peoples of the USSR were forged into a single, classless, ideologically unanimous Soviet people. This was to be achieved through education, economic development, and ideological indoctrination. In practice the Soviet state’s grasp of its people’s aspirations and imaginations became more and more feeble after the 1960s. Nevertheless, something we might call Homo Sovieticus did come into being – a product not so much of indoctrination as of mobility.

Stalin’s deportations were the most brutal and sweeping case: deporting entire nationalities and dumping them in Central Asia. Under Khrushchev these movements became more voluntary – of young enthusiasts to the “Virgin Lands” of Kazakhstan, or technicians to cities. These migrations overlaid and sometimes reinforced earlier patterns of migration from before 1917. When the new fishing port of Aralsk was opened on the newly constructed railway from Orenburg to Tashkent in 1905, it was populated by Bessarabian fishermen who migrated there from the Danube delta. The Russian empire was like its British and French counterparts in that it produced a bewildering cosmopolitanism in its great cities. Pre-revolutionary Baku, with its mixed Armenian/Azeri/Jewish/Georgian/Persian/Russian population, could easily stand comparison with Bombay or Alexandria in this regard. This cosmopolitanism persisted into the Soviet period when it became the capital of Soviet Azerbaijan.

Mingled populations are characteristic of empires, and they have suffered harshly from the nationalist dogmas of the 20th and 21st centuries, which decreed that Bombay belonged to Marathi-speaking Hindus, and that there was no longer any place for Greeks or Jews in Alexandria.

In some ways the Soviet Union held the tide of nationalism at bay for longer than might have seemed possible in 1917. Paradoxically it did so by conceding considerable ground to the principle of nationality, exemplified in the structure of the 15 Soviet republics: “national in form, socialist in content” seems an ironic slogan now because nationalism has proved so much more durable than communism. However not everyone fit into the national categories recorded in Soviet passports, and not even the bewildering complexity of union republics, autonomous republics and autonomous oblasts could capture the full complexity of Soviet identity. Not only did multiple peoples live alongside each other in ways that defied territorial definition – they also intermarried across religious and ethnic boundaries, and produced new identities.

Nowhere was this truer than Ukraine and Kazakhstan. What is now eastern and southern Ukraine, which until the end of the 18th century had been home to small populations of Turkic nomads and mixed Turkic/Slavic Cossacks, became a destination for multiple migrations. Russians, Ukrainians, Greeks, Romanians, Bulgarians and Jews blended into a Russian-speaking – but not straightforwardly Russian – population. Kazakhstan was the only republic where in 1991 there was no overall ethnic majority. Kazakhs made up 40 percent of the population, Russians 38 percent, and the balance included almost every nationality to be found in the USSR, from the Germans deported there by Stalin and their descendants to “Uzbeks” who had long lived in the cities of the southern steppe and found themselves in Kazakhstan as a result of Soviet border-drawing. Even these statistics only reflected “passport nationality” – the offspring of a Russian-Kazakh or Kazakh-Tatar mixed marriage could choose which nationality to belong to.

Many predicted as a result that Kazakhstan would fall apart after 1991. Three-quarters of the German population left for Germany, and many Russians moved to Russia. Today Kazakhstan’s population is roughly 65 percent Kazakh and 20 percent Russian – but ethnic diversity is still a fact of life. The planet of 100 languages is still with us. And, unlike Ukraine, it has not fallen or been torn apart.

Kazakhstan’s relative economic success is probably a factor in this – GDP per capita has at times been higher than in Russia, while Ukraine’s is currently three-quarters lower. Since independence the more extreme demands of Kazakh ethnic and linguistic nationalism have been kept in check by policies which tacitly protect the status of Russian, and continue to celebrate ethnic, cultural and linguistic diversity in ways which recall the Soviet “friendship of peoples.” Most important of all, perhaps, is that, unlike Ukraine, Kazakhstan has not been exposed to open hostility, invasion and territorial annexation by Russia.

In 2005 Vladimir Putin described the collapse of the Soviet Union as “the greatest geopolitical tragedy of the 20th century.” It is a line which has been often recalled since, most notably during the Russo-Georgian war of 2008, the invasion and annexation of Crimea in 2014, and Russia’s continued meddling in the Ukrainian civil war which it did so much to provoke. Putin was referring to the fact that tens of millions of ethnic Russians had been left beyond the borders of the Russian Federation, and the remark has been interpreted retrospectively as a sinister warning of a revanchist foreign policy that would seek to foster Russian irredentism in former Soviet republics with large minorities. That this has not yet been directed against Kazakhstan is partly down to its maintenance of good relations with Russia, and the fact that Nursultan Nazarbayev’s rule is in no sense an ideological threat to Russia’s ruling elite – unlike the revolutions in Ukraine. Nevertheless there have been tensions, most notably when Putin questioned the antiquity of Kazakh statehood in 2014.

In this context, any form of nostalgia for the Soviet Union would seem to play Putin’s game. We should not idealize inter-ethnic relations in the USSR, or accept the regime’s propaganda about the friendship of peoples unquestioningly. There was a clear hierarchy among Soviet nationalities – the Russians were at the top, then the titular nationalities within their respective republics, then members of other recognized nationalities. Marrying a Russian was often essential for the advancement of political or military careers. State-approved forms of national culture in the USSR were often narrow and stereotyped.

And yet across Central Asia as well as in Eastern Ukraine, nostalgia for the Soviet past is widespread, and not just among ethnic Russians. This is partly a function of false memory – many of those who profess to hanker after Soviet times are too young to remember what they were really like. Nostalgia for youth is a universal phenomenon. However, as Shaun Walker also argues in his recent book, a great many former Soviet citizens outside Russia would agree with Putin that the collapse of the Soviet Union was a tragedy – partly because they had been proud to be citizens of a great power where standards of living were often higher, but above all because Soviet identity was imperial, not national, and civic, not ethnic. If you were a product of a mixed Tatar-German marriage in Kazakhstan, a Russian-speaking Korean living in Uzbekistan, or a Jewish intellectual in Dushanbe, it was easier to think of yourself as Soviet than as a citizen of whichever republic you ended up living in after 1991. At the Soviet collapse, borders sealed the republics apart from each other to a much greater degree than before.

It is hardly surprising that many people in Central Asia and elsewhere in the former USSR still have a sentimental attachment to the Soviet past. Attempts to erase this, such as Ukraine’s condemnation of the entire Soviet period, are divisive, ahistorical and counterproductive. The best way to resist the Kremlin’s exploitation of Soviet nostalgia is to deny its claim to be the USSR’s sole legitimate heir. The complex, mixed identities which Soviet rule produced still exist, and cannot be forced into narrow ethnic and linguistic national frameworks. The challenge both for Ukraine and for the Central Asian Republics is to forge new civic identities with which all their citizens can identify, not just members of the titular nationality.

Alexander Morrison is fellow and tutor in history at New College, Oxford. He is currently writing a history of the Russian conquest of Central Asia.