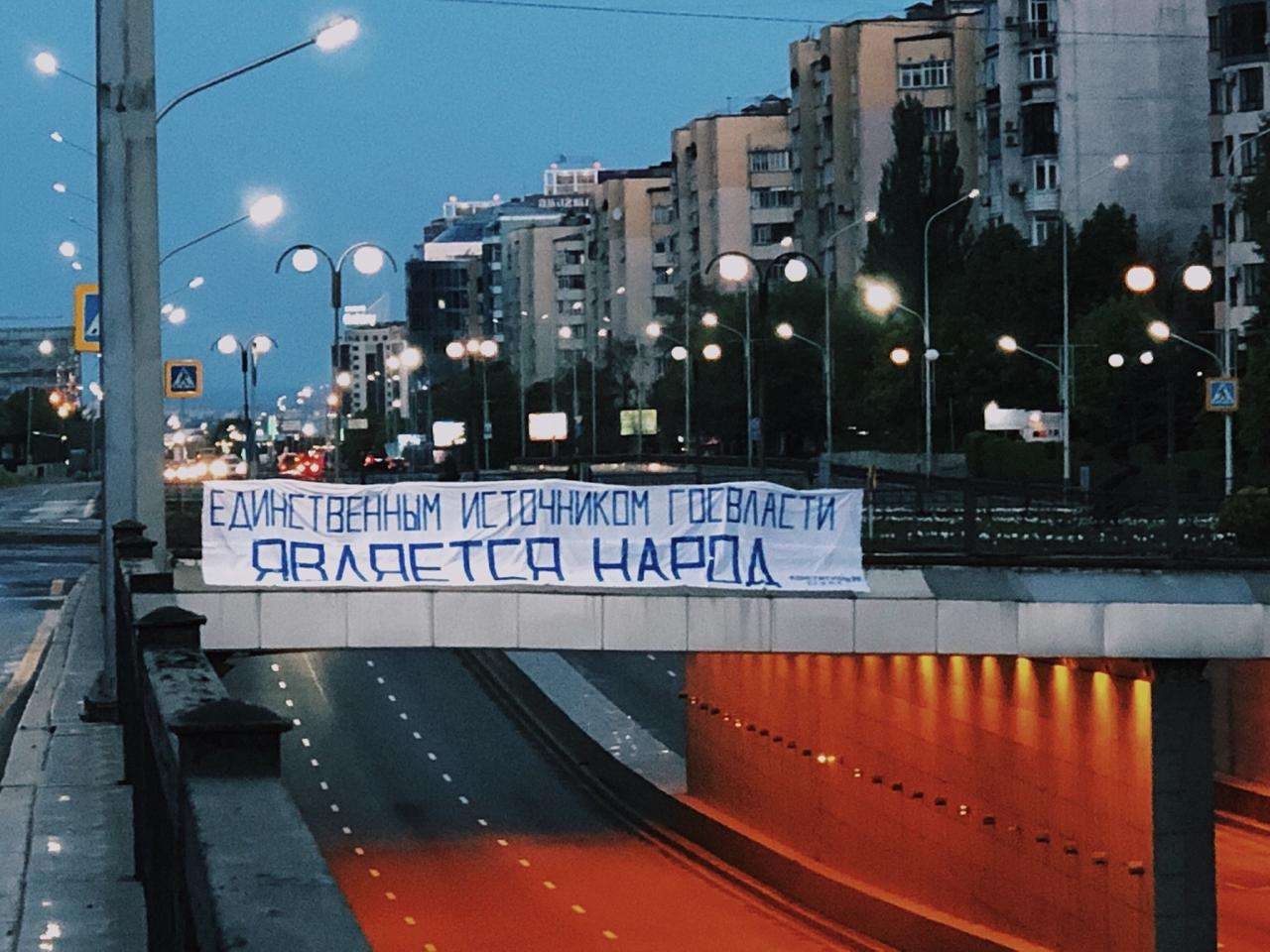 This passage from Kazakhstan’s Constitution got an activist five days in jail. (Image from social media)

Unlike in the past, this effort to nip dissent in the bud is not working. Kazakhstan’s tried-and-tested techniques for protest control – basically, nab anyone holding a placard before they can attract a following – look frail and old-fashioned.

When two activists holding a sign “You cannot run from the truth” at a marathon in Almaty on April 21 were quickly arrested, more activists appeared the next day. Online, a crowdfunding campaign quickly collected enough to cover their court-imposed fines. Earlier this week, a lone protestor holding a banner that quoted the constitution was jailed for five days on hooliganism charges.

The vanguard making these arrests is the police, run by the Interior Ministry. The Soviet Union created the Interior Ministry to protect the political leadership from social unrest (and the Red Army to protect the state from external enemies). This structure of power relationships endures. Today, in autocratic regimes like Kazakhstan and Russia, the police remain loyal to the incumbent regime, not to the people.

After deadly riots in Zhanaozen in 2011, Nazarbayev focused on preventing political protests by better monitoring social grievances and quickly allaying any collective demands for policy changes. To spread intelligence-collecting, he expanded law-enforcement functions to other government agencies, such as National Welfare Fund Samruk-Kazyna and municipal authorities, which were tasked with monitoring social media to detect grievances that could translate into collective action. The Interior Ministry, too, expanded the scope of its deterrence functions by adopting zero-tolerance strategies in major urban areas, forbidding even minor acts of disobedience such as single-person protests.

Once protests do break out, authorities quickly neutralize their messages. In February, when Kazakhstan was aghast at a fire that killed five children, a group of mothers assembled to demand reform. They were quickly mollified with promises of marginal improvements in social payments and labor conditions. The government makes such policy promises as long as they do not require deeper changes.

The police are also selective about when to use violence against protesters. They want to avoid triggering a major public backlash over relatively narrow policy issues. Especially in highly wired urban areas where information can quickly go viral, the authorities target activists and journalists for arrest or detention. These efforts to eschew violence – by preventing protests before they occur – shows the regime’s understanding that physical suppression of public protests may mobilize broader coalitions of activists.

The Interior Ministry presents itself as willing to reform, so long as its monopoly on force goes unchallenged. For example, the urban middle class expects the police to clean up public spaces. In 2014, the president ordered the Interior Ministry to take a zero-tolerance attitude to minor irritants such as spitting, panhandling and loitering, which are often associated with migrants from the countryside. After just a few months, police reported a spike in disorderly and criminal behavior. They were targeting places migrants frequented, such as train stations and public parks and framed this policing style as an effort to help society’s “moral and cultural” development.

Yet by overtly suppressing public mobilization, police in Kazakhstan show that they fear the expanding middle class. Thanks to Nazarbayev’s popularity among the urban public, and the police’s ability to preempt collective action, protests were infrequent during his reign.

As Nazarbayev’s hand-picked heir, Kassym-Jomart Tokayev, is already seen as weaker. His reputation could further suffer if his carefully choreographed enthronement continues to be dogged by such protests. And protests have a way of becoming self-perpetuating.

If public protests continue to dominate discussions on social media, they may become more frequent, more emotionally laden and involve more segments of the population. The government’s strategy – prevention and targeted arrests – may become ineffective. Tokayev will be faced with the option of banning protests altogether, like in Uzbekistan, or engaging with the protesting public and trying to respond to bottom-up requests. At best, a more representative government will emerge and allow new venues for state-society collaboration. At worst, police-public interactions may become more violent.

Erica Marat is an associate professor at the National Defense University and author of The Politics of Police Reform: Society against the State in Post-Soviet Countries (Oxford University Press, 2018).

The opinions, conclusions, and recommendations expressed or implied within are those of the author and do not necessarily reflect the views of National Defense University, the Defense Department or any other agency of the Federal Government.