Russian elections are choreographed affairs in which a corruption crackdown unfolds alongside the election campaign. 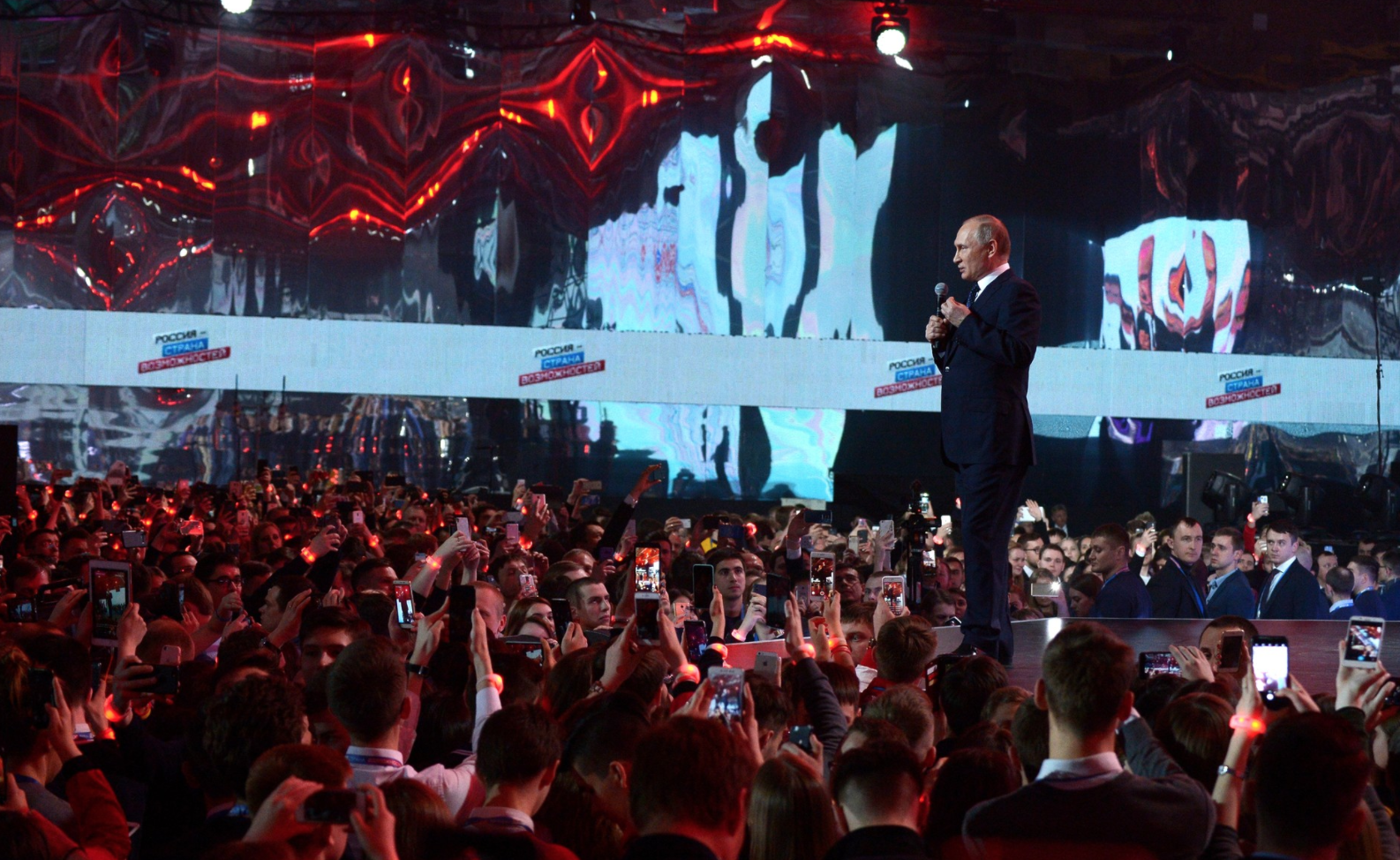 Russian President Vladimir Putin addresses the crowd at a forum entitled "Russia is a Country of Opportunities" in Moscow on March 15, 2018.

There were two certainties during the buildup to Russia’s presidential vote on March 18: incumbent Vladimir Putin was assured of winning reelection convincingly, and some of his underlings needed to fall from grace.

A predictable electoral pattern has taken hold in Russia during the Putin era, forged by the pervasive corruption in the political system. Elections have become choreographed affairs in which a corruption crackdown on a few high-profile political figures tends to unfold alongside the election campaign.

Polling data in 2017 conducted by the Levada Center, a respected Russian pollster, found that almost four out of five Russians believe corruption has "completely infected" or "significantly infected" Russian bureaucrats, and roughly two-thirds of the population believe it is in Putin’s power to do something about it.

It’s not a surprise, then, that several princes of the political system have recently traded in the abundant perquisites of power for a prison cell – all of them accused of graft.

The latest scapegoat is Abdusamad Gamidov, a top official in the southern autonomous republic of Dagestan, who was taken into custody in February. That month, long prison sentences were handed out to two regional governors, Kirov’s Nikita Belykh and Sakhalin’s Alexander Khoroshavin. And last December, a court sentenced Economy Minister Alexei Ulyukayev to eight years in prison for allegedly soliciting a $2-million bribe.

Another high-profile figure to find himself in the anti-corruption spotlight is Leonid Markelov, the former governor of the Mari El Republic, an ethnic enclave situated along the Volga River. Maris, who come from a Finno-Ugric cultural background, comprise about 40 percent of the territory’s inhabitants, a slightly lower share of the territory's overall population than ethnic Russians.

Markelov had served as the governor of Mari El from 2001 until he resigned in early April last year. Shortly after his resignation he found himself under investigation for allegedly taking bribes worth 235 million rubles ($4.2 million). And in January of this year, a Moscow court opened a second criminal case against him, this one involving weapons charges. The second case enabled authorities to extend his pre-trial detention into April.

Throughout his 16 years in power, Markelov gained a reputation for being insensitive, even antagonistic toward Mari El’s titular ethnic group. International human rights groups accused him of committing minority rights abuses. He was also a proponent of abolishing Mari El’s special status as a republic and thus removing cultural protections for Maris.

Corruption allegations had shadowed Markelov throughout his tenure – many of them linked to extravagant building projects that transformed the center of Yoshkar-Ola, the capital of the resource-poor republic. Among the more ostentatious structures are a castle-like puppet theatre, numerous cathedrals and replicas of landmark buildings in Venice and Moscow. Buildings along the river embankments have been refashioned to resemble a mix of Amsterdam and Bruges, and the center is populated with an eccentric collection of statues depicting such personalities as Grace Kelly, Rembrandt van Rijn and Lorenzo de Medici. While the core of Yoshkar-Ola now has a Disneyland-like appearance, much of the city has crumbling infrastructure and housing stock.

Markelov proved adept at retaining Kremlin support. Federal authorities allegedly took action to ensure Markelov’s reelection in 2004. Following the abolition of popular elections for regional heads, Markelov joined Putin’s United Russia Party in 2007, and in 2009 then-president Dmitry Medvedev reappointed Markelov. He thus survived an extensive reshuffling of regional heads under Medvedev, a campaign dubbed the “rejuvenation of cadres.” In financial terms, Mari El, as one of the poorest regions of Russia, heavily depended on federal subsidies during Markelov’s term.

The turning point for Markelov came in the fall of 2016, when Mari El became one of three regions in which a United Russia candidate lost a race for the State Duma during parliamentary elections. In January 2017, protests in Yoshkar-Ola called for Markelov’s resignation in response to his government’s decision to repeal numerous social benefits for the elderly and increase utility rates. It is likely that during this time that the Kremlin found Markelov to be a liability.

Russia media outlets have reported that Markelov’s family members own most of the new construction projects in Yoshkar-Ola, as well as some of the most profitable businesses in the republic. At the time of his resignation, Markelov left behind a reported sovereign debt in Mari El exceeding 13 billion rubles (about $230.9 million).

Overall, Moscow replaced a total of 19 regional governors in 2017, including the leaders of Samara, Nizhny Novgorod, Novosibirsk, Dagestan, and Oryol, where the former governor, Vadim Potomsky, made international headlines for erecting Russia’s first monument to Ivan the Terrible.

Just days before the presidential election, Putin visited Dagestan, the scene of the corruption scandal that brought down Gamidov. During the well-scripted trip, he acknowledged that corruption is a nationwide concern. "There is such a problem in the country,” Russian media outlets quoted him as saying.

Yet for all the attention the issue has received during the weeks before the presidential election, few are expecting the situation to substantively change after the voting results are announced.