Perspectives | Tashkent Syndrome: Is Uzbekistan getting a free pass?

There is a danger that distant observers will judge Mirziyoyev's government only on standalone concessions or vague promises. 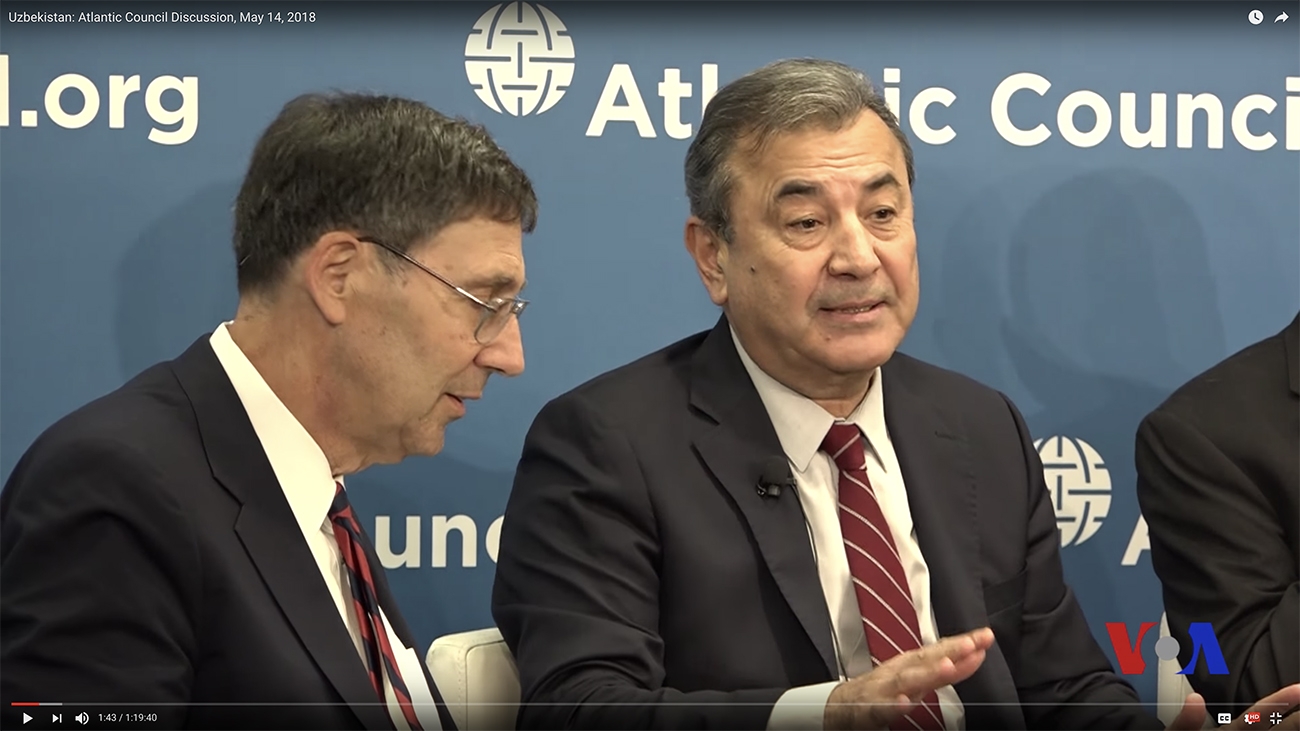 Sodiq Safoyev, an aide to the Uzbek president, speaking at the Atlantic Council this week. (YouTube)

What is the right bar against which to measure the seriousness of Uzbekistan’s commitment to ushering in the rule of law and basic freedoms? Token giveaways and promises? Or genuine, deep and irreversible reforms?

On May 15, Uzbek President Shavkat Mirziyoyev arrived in the United States for an official visit that has had analysts, diplomats, officials and even some journalists falling over themselves with gratitude and praise. Going by the most rose-colored accounts, Uzbekistan has embraced democracy, restored freedom of the press and is busy making genuine wholesale reforms to all levels of government.

This often unfettered exuberance is in no small part down to the Uzbek government’s deft public relations strategy. Back in the days of the late President Islam Karimov, who died in 2016, the country’s attitude to the outside world closely mirrored that of its pathologically grumpy, antisocial leader.

Now, journalists are instead selectively permitted to enter Uzbekistan in the expectation that they will write largely positive accounts of the still-piecemeal changes being effected by Mirziyoyev’s government. Officials who would once not so much have looked at Western reporters as talked to them are eager to spread the good word.

“The ice is melting in this country,” Sodiq Safoyev, an aide to Mirziyoyev, told a New York Times reporter in an April article headlined “As Authoritarianism Spreads, Uzbekistan Goes the Other Way.”

There was a time when Tashkent had to scour the most obscure nooks of the internet to find such complimentary headlines.

But there is a danger that those with only a passing understanding of processes inside Uzbekistan – or cynical indifference – will judge the government by either standalone concessions or vague promises.

A statement from 12 human rights organizations issued to coincide with Mirziyoyev’s stay in Washington, makes the point well when it argues that “internet censorship, politically motivated imprisonment, torture, a lack of competitive electoral processes, and a lack of justice for serious past abuses remain to be addressed.”

“At this hopeful time for Uzbekistan, the government should ensure that the modest steps already taken in the right direction lead to enduring and effective human rights protection for all of Uzbekistan’s citizens,” Steve Swerdlow, Central Asia researcher at Human Rights Watch, said in the statement.

The hope alluded to by Swerdlow is inspired by such developments as the recently concluded trial of journalists facing sedition charges, which culminated in all the defendants being released. Some of the response has been decidedly misleading.

“Mirziyoyev has sent other signals of his readiness to part with past illiberal policies,” political analysts Aziz Egamov and Rafael Sattarov wrote in a comment piece for the Atlantic Council, a Washington-based think tank that has served as a particularly lively champion of the Uzbek leader. “The Tashkent City Court, for example, ordered the release of journalist Bobomurod Abdullayev on May 7, days before Mirziyoyev’s trip to Washington.”

While it is true that Abdullayev was freed from jail, it is also important to note that he was actually given a suspended three-year sentence. To be clear, Uzbekistan is a country that convicts journalists for writing irreverently about its leadership. Hardly a matter for celebration.

Likewise, there has been much – possibly premature – jubilation about Tashkent’s decision to grant long-term journalistic accreditation to the U.S. government-funded Voice of America.

“The country is committed to creating a genuinely free and vibrant civil society and mass media,” Javlon Vakhabov, the Uzbek ambassador to the United States, insisted at an event at the National Press Club in Washington this week. “Navbahor Imamova, who joined our panel discussion today, has become the first and only U.S. journalist in Uzbekistan and we are very happy for that.”

Vakhabov’s voice went up on the word “only,” as well it might. As Swerdlow pointed out during the same event in Washington, other outlets are still being kept at bay.

“We’d like to see the BBC finally get its accreditation. It’s been about a year now since the announcement that they would return to the country. And Radio Free Europe and Deutsche Welle, they’re all on this list,” Swerdlow said.

Eurasianet has also repeatedly sought to obtain accreditation in the past year without success.

Local reporters breathe a little easier these days, but anecdotal evidence suggests self-censorship and other safety precautions are still necessary to avoid reprisals.

This partial openness raises uncomfortable questions about the seriousness of the government’s willingness to truly effect root-and-branch changes to some of the nation’s most distressing ills.

Consider the issue of forced labor in the cotton fields. While much progress has seemingly been recorded on this front, rights activists revealed recently that the government “continued to direct and supervise forced labor in the 2017 cotton harvest.” In accounts that could have been written any time over the past 25 years, the Uzbek-German Forum for Human Rights detailed in a 96-page report how medical workers, private sector employees and students are still being press-ganged into the exhausting work.

“People faced consequences, including dismissal, loss of salary or benefits, and other punishments if they refused to pick cotton or failed to work hard enough,” the report, released this month, noted.

If Uzbekistan is truly embracing the notion of a reckoning with its historic excesses, revisiting some dark chapters feels inevitable.

And yet, there is no indication whatsoever that Tashkent intends, for instance, to permit any independent investigation of bloody events in May 2005 in the city of Andijan, when government troops put down a local uprising through unrestrained use of live fire. On the contrary, at least one senior security official in charge at the time has been rehabilitated after years in the wilderness. Mirziyoyev was prime minister at the time.

For all the talk of a budding civil society and openness, Uzbekistan still has no real opposition parties. Politics is restricted to the rubber stump ghetto known as parliament. The head of the neutered security services in March threw cold water on the notion that long-banned opposition movements might finally be registered.

"Their main goal today is to legalize their activities, and for tomorrow it is to disrupt peace and tranquility in our country," said Ikhtiyor Abdullayev, head of the State Security Service, summarizing the authorities' abiding distrust of political diversity.

Proponents of the slowly-slowly approach will contend that it is misguided and unreasonable to hold Uzbekistan to unrealistic standards. Beyond being informed by inherently bigoted lowered expectations – as though Central Asia is by its very nature inclined to political regressiveness – this stance also fails to properly account for the dangers of backsliding.

Look no further than to Safoyev, the presidential aide charged with propagating the thaw narrative, for a reminder that changes can go in both directions.

“It was unexpected to me that in such a short time we might have such a new environment and a new spirit in the country,” Safoyev told an Atlantic Council panel on May 14. “You might ask what’s behind this aspiration, whether it is genuine, not an imitation of reforms, whether it will have an irreversible character? … We hope. We hope so.”