Perspectives | Tensions between Iran and Azerbaijan back on the agenda 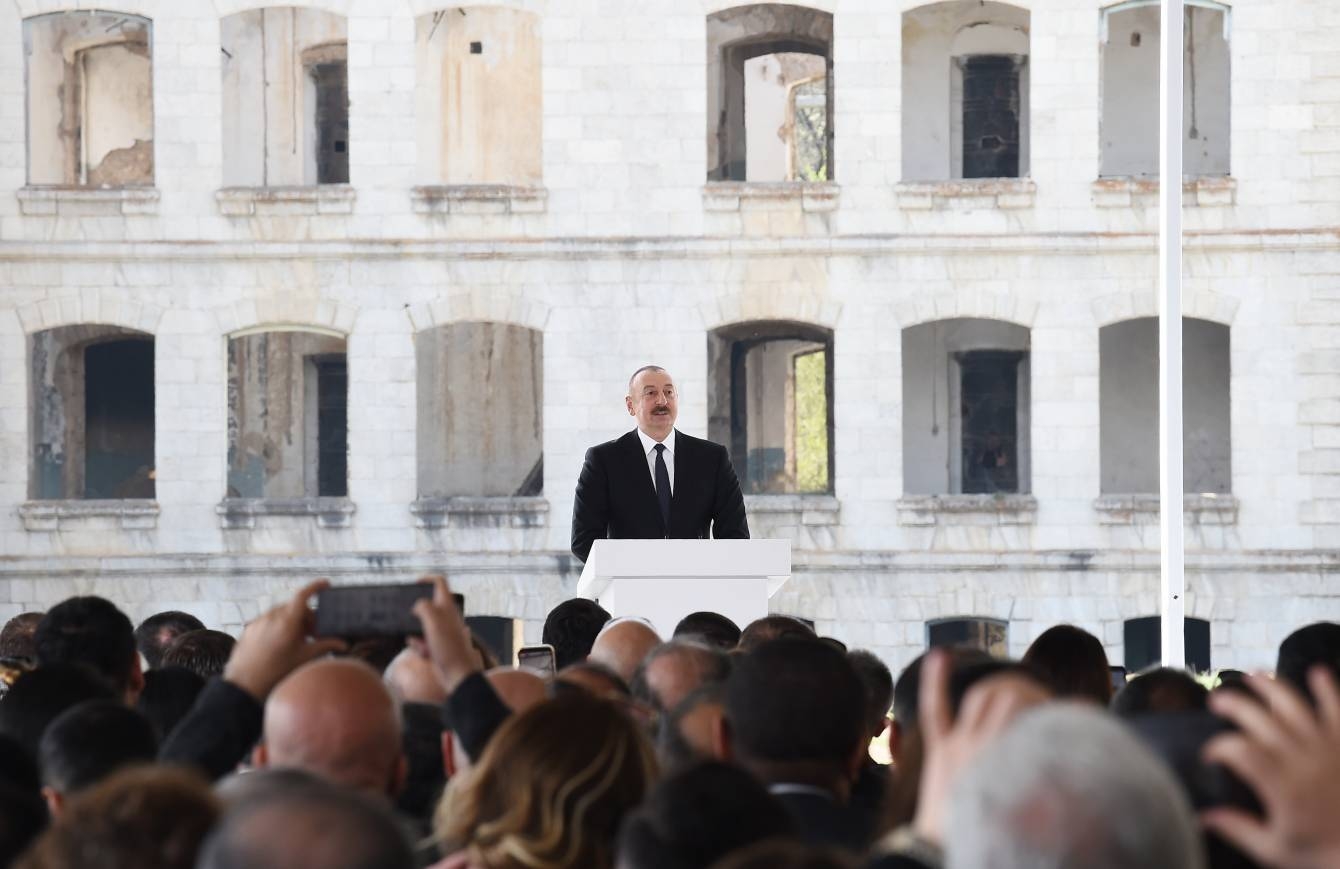 In late April Azerbaijanis from around the world gathered in Shusha, in Karabakh, for a diaspora conference, the Fifth Congress of World Azerbaijanis. Among the invitees were those who dabble in promoting separatism for Iran’s northwestern, majority-ethnic-Azerbaijani provinces.

One such Iranian Azerbaijani activist at the conference tweeted that Shusha “has just been liberated from the occupation, with great joy and pride. It is my wish that the next congress will be held in Tabriz.” Tabriz, in northwestern Iran, is the center of that country’s large ethnic Azerbaijani population, in what is often referred to in Baku as “southern Azerbaijan.” The activist, M. Riza Heyet, later posted a photo of his group with Fuad Muradov, the top Azerbaijani state official dealing with the diaspora.

And in the days ahead of the congress, one representative of Azerbaijan’s official “diaspora information center” got in a Twitter fight with an Iranian journalist, thundering that “not only Armenia, but also Iran is Azerbaijan” and threatening to hold the next diaspora congress in Tabriz.

It all did not go unnoticed in Iran.

A few days after the diaspora congress, President Ilham Aliyev took questions from international scholars and analysts at another event, in Baku. One attendee, Iranian analyst Vali Kaleji, challenged Aliyev about statements at the Shusha meeting.

“Unfortunately some Azeri Iranians who attended the [diaspora] summit spoke openly against the territorial integrity and national security of Iran, as well as separatism of Azeri regions of the northwest of my country,” Kaleji said. “Unfortunately the dream of forming a greater Azerbaijan uniting the two sides of the Aras River, clearly raised by these individuals, caused concern and unhappiness to many of my colleagues and people inside Iran.”

Aliyev challenged Kaleji back, claiming that any expression of separatism at the conference “doesn’t have any connection with Azerbaijani government […] your comments have nothing to do with Azerbaijani-Iranian relations.” He went on to claim that Azerbaijan is a “democratic society” where “everyone can say what they want” and that “Shusha is an open, free city where thousands of people come and express their will.”

This of course is disingenuous, as anyone who understands Azerbaijan knows. Speech is not free in the country. And at a state-run event, all the more so with the president present, any invitee has the tacit approval of the government.

Beyond that, two things stood out about Aliyev’s response.

For one, he didn’t deny the presence of activists questioning Iran’s territorial integrity, even though Baku tends to steer far clear of anything close to the “South Azerbaijan” question in order not to inflame tensions with Iran.

Second, he made a counteraccusation against Iran for harboring political exiles from Azerbaijan who, Aliyev said, question the territorial integrity of Azerbaijan.

For the first time, Aliyev made public that he had approached the then-president of the Islamic Republic, Hassan Rouhani, at a summit of Caspian littoral states in Kazakhstan, with a list of 20 Azerbaijanis resident in Iran demanding their extradition. Aliyev claimed that they were involved in a 2018 failed assassination attempt of Elmar Veliyev, the then-mayor of Azerbaijan’s second city, Ganja, and subsequent unrest including the murder of two security agents.

Aliyev appeared to be referring to the Huseyinciler, or Hosseinytes, a shadowy group of Azerbaijani Shiite fundamentalists led by Towhid Ibrahimbeyli who boasted of his ties with Qassem Soleimani, who commanded the elite Al-Quds force of the Islamic Revolutionary Corps Guards (IRGC) until he was assassinated in Iraq by a U.S. drone strike.

But Islamists, contrary to Aliyev’s implication, do not question Azerbaijan’s territorial integrity. What they advocate for is an Islamic regime in Azerbaijan, along the lines of Iran’s. Ibrahimbeyli criticized not only Aliyev but also the leader of the secular opposition, Ali Karimli, after the latter warned against using Soleimani’s assassination to foment strife between the secular and Islamist Azerbaijanis.

In addition, the circumstances of the 2018 events in Ganja remain murky. As Azerbaijan has neither an open political and media environment nor a credible justice system, the claims of Islamist involvement in the unrest were never conclusively established. The fact that the authorities routinely frame Islamists to stifle dissent only added skepticism about the claims.

Adding further to the confusion, at the outset of the events in Ganja the authorities first suggested that the motive was not political but rather a personal vendetta against the mayor, who was widely resented for his abrasive style and allegations of corruption. The Shiite Islamist, Iranian trace was mooted only later on, possibly due to geopolitical exigencies of the time.

Were Aliyev’s words in Shusha meant as an invitation to Iran to extradite Azerbaijani Islamists in exchange for limiting the activities of Iranian Azerbaijani separatists in Baku? That would not be impossible. In the past, when it was politically convenient, Baku made it clear to some Iranian Azerbaijani activists, such as Mahmoud-Ali Chehraganli, that they were no longer welcome. But even if Azerbaijan were interested in such a deal, it’s doubtful that it would work in the current environment.

As Azerbaijan remains at odds with Armenia over the so-called “Zangezur corridor,” a strip of Armenian territory that borders Iran and which is supposed to be the site of a new transport link between mainland Azerbaijan and its exclave of Nakhchivan, a new escalation of hostilities remains a possibility. Iran repeatedly has voiced its strong opposition to any change of borders in the Caucasus, implying that it won’t tolerate a loss of its border with Armenia. In case of a renewed war, Baku may seek to use Iranian Azerbaijanis as a pressure point against Tehran.

Conversely, actors in Iran, particularly in the IRGC, see Azerbaijani Islamists as a useful asset against Baku. Although relations with the Caucasus were traditionally under the purview of Iran’s civilian government, while the IRGC mostly focused on Iraq, Syria and Lebanon, in the wake of the second Karabakh war that is changing.

Analysts and social media accounts close to the IRGC are increasingly warning Azerbaijan over its ties with Israel. Particularly indicative was the interview of well-connected analyst Sayyed Afghani to the Fars News Agency, which is considered to be a voice of the IRGC. Afghani singled out Azerbaijan as a security challenge alongside the United Arab Emirates and Bahrain, which both recently established relations with Israel and are among Iran’s chief adversaries in the region.

But pro-IRGC circles are not the only ones turning up the heat on Azerbaijan. The more reformist-leaning irdiplomacy.ir, widely read in Iran’s diplomatic community, recently ran another piece warning against the “pan-Turkist threat” supposedly posed to Iran by the Turkish-Azerbaijani tandem.

There have been some improved atmospherics in bilateral relations following the signing of a memorandum on new transportation links between Azerbaijan and Iran. Nevertheless, mistrust between the two neighbors runs deep and the recent events in Shusha augur more tensions in the future.