Widely seen as one of the losers of the recent conflict, the EU could contribute to making the emerging regional order more viable – and rebuilding trust with the parties. 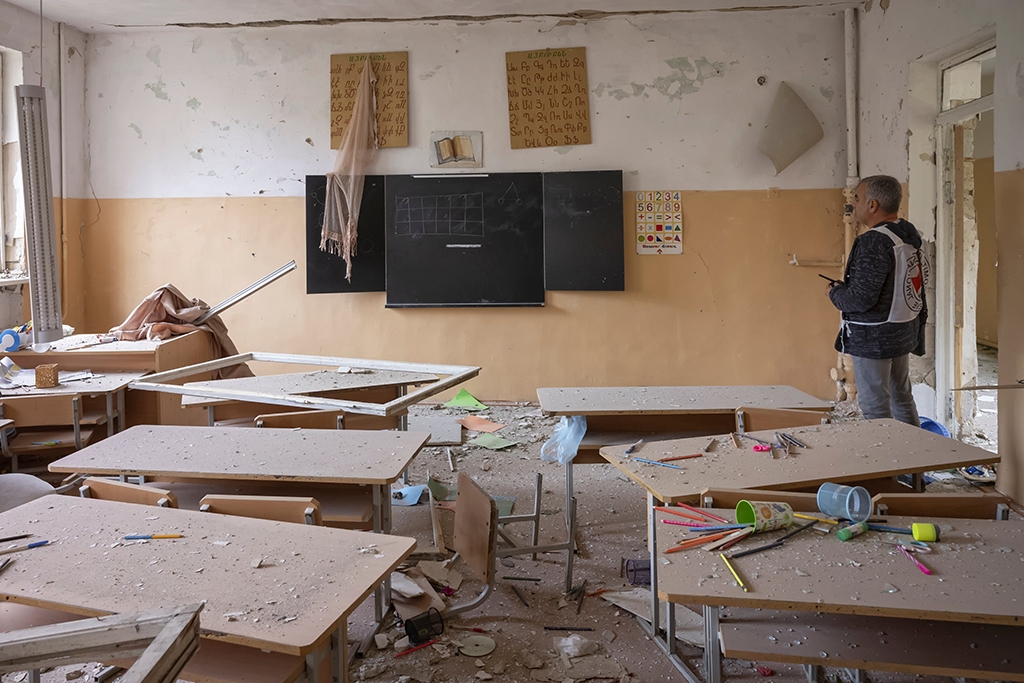 A Nagorno-Karabakh school hit by shelling during the recent war (photo: ICRC)

Among the winners and losers of the Second Karabakh War, Europe – and specifically the European Union – is unanimously regarded as falling into the latter category. Confronted with a major conflict in the body’s “Eastern Partnership” zone, the EU was able to do little other than issue statements of concern. Russia and Turkey, meanwhile, acted and decided outcomes.

In Armenia, trust and aspirations focused on the EU collapsed as Europe was condemned for its passivity and, by implication, complicity in Armenia’s defeat. In Azerbaijan, the EU – guilty by association with European media or statements from individual member-states – was condemned for pro-Armenian bias. If there was one thing the two conflicting sides could reach a consensus on, it was European hypocrisy.

It was inevitable that the EU found itself sidelined in the war. This reflects a much longer-term dynamic in which the EU has been peripheral to the Armenian-Azerbaijani conflict in ways that make this context different from others in Eurasia.

There has never been an EU membership perspective for either Armenia or Azerbaijan. Rather, the EU’s bilateral relationships with both states have always been marked by ambivalence. In the Azerbaijani case, extensive energy ties have never translated into influence in the sphere of governance, instead granting Azerbaijan considerable normative autonomy. In the Armenian case, the depth and breadth of ties with Russia has strictly narrowed the horizons of the Armenia-EU relationship.

And whereas the EU has directly confronted Russia in Eurasia’s other conflicts, in this case Euro-Atlantic actors have found themselves in an uneasy alliance with Russia as outside powers with a common interest in avoiding a major war. Without the Russia factor, this conflict has lacked a clear geopolitical or affective narrative easily recognizable to Europeans.

The EU also has no clear mandate in this conflict. It has an unclear symbolic presence within the Minsk Group through the individual voices of five EU member-states. Only one of these, France, features in the permanent troika of co-chairs that, together with Russia and the United States, leads the Group. In practice this has resulted in the EU becoming implicated in France’s narrower national agenda. The other four member states (Germany, Italy, Sweden and Finland) are present only in the Group’s outer circle, which to date has played no role.

Outside the Minsk Group, the EU had in the last several years found a niche supporting civil society-led peacebuilding programs, but these efforts were hamstrung by a deteriorating security climate and constraints on civil society activism in Azerbaijan.

Finally, as the recent war vividly demonstrated, in the hard power politics of the Armenian-Azerbaijani conflict there is simply no obvious role for a soft power actor like the EU – other than picking up the tab for post-war reconstruction and development.

These barriers to EU involvement have if anything been made even more impassable as a result of the war, even as Europe is regularly called upon to do more.

Most obviously, the regionalization of the conflict has seen an international coalition that tried (however dysfunctionally) to mediate replaced by a conflict management system controlled to all intents and purposes by Russia and in which Turkey has a newly powerful voice.

A multilateral dynamic involving the OSCE – the principal body through which European states had been able to influence the situation – has all but vanished. European irrelevance has, furthermore, been starkly compounded by the absence of the United States.

The most that currently appears plausible is that the OSCE and EU might contribute to a quiet “multilateralization” of the new situation, given that the new context establishes many more new interfaces between Armenian and Azerbaijani spaces, communities and politics than either Russia or Turkey have the capacity or will to moderate.

Calls for the EU to be engaged therefore need to be realistic, and to recognize that its role will be limited. All the previous constraints on EU entry into this conflict not only remain in place, but have been strengthened by a significant sense of disappointment by both warring parties.

For many in Azerbaijan, the French Senate vote of November 25, 2020, calling on the French government to recognize Nagorno Karabakh compromised France’s impartiality as mediator. In Armenia, following European countries’ inaction during the war many no longer see the EU as a normative power or club to aspire to.

Crisis has come to already questionable assumptions of a long-term relationship between each of the parties and the EU based on ethics and values. To begin to rebuild these ties, it may be necessary to revert initially to a more transactional relationship based on consistency, competency and predictability.

The November 10 ceasefire statement presented a kind of vision for a new regional order. The shape of this new order was further expanded in the statement following the January 11 meeting of Presidents Vladimir Putin and Ilham Aliyev and Prime Minister Nikol Pashinyan, which set in motion the creation of communications links between Armenia and Azerbaijan.

One area where the EU can contribute is through mobilizing relevant expertise, skills and resources drawing on the EU’s considerable experience of post-war stabilization in order to support best practice in sustainable regional design. There have also been proposals for the EU to offset financial risk for investment through mechanisms such as a development bank.

A transactional approach has largely defined the EU-Azerbaijani relationship to date, and it may now redefine the EU-Armenian relationship. Over the long-term, however, the EU should invest in trust by supporting actions and local actors who espouse values of accountability, pluralism and tolerance.

One way to do this is for the EU to support long-term, civil society-led change. Another way is for the EU to support the investigation of war crimes and atrocities during the recent war, and thereby to challenge the cycle of impunity that has blocked dialogue for so long. There have been calls for a truth commission on the Armenian side. Supporting such endeavors to arrive at a collective and consensual record of what happened is a critical area where European actors can contribute.

Contributing to a regional strategy

There are epochal changes underway in the regional structure and infrastructure of the South Caucasus, a long-fractured region that is now being transformed in a highly geopoliticized, top-down way. Local aspirations and the ‘soft’ ties on which regional coherence ultimately depends risk being lost.

The EU can mitigate this risk, both by playing a networking role among disparate actors and by nurturing a soft regionalism supporting informal initiatives to encourage trade, people-to-people contacts, and educational and cultural exchanges. The new environment has created new possibilities to move away from top-down geopolitics toward a more networked regionalism, one that embraces all of the region’s actors and neighbors.

The EU needs to be realistic in terms of what it can achieve, but also to remember two key assets: First, the EU represents an alternative to hegemonic regionalism. In a region bruised by rivalries and great power frictions, the EU’s offer to Armenia and Azerbaijan is more horizontal and consensual. Second, the EU has no ambitions to a monopoly on the region. Rather, its interventions have intergovernmentality at their core, working with other governments, organizations and mandates towards a denser infrastructure conducive to peace. Slowly, a strategy of regional suture could emerge – if all parties seize the opportunity.