How did diplomacy become so irrelevant to resolving the Armenian-Azerbaijani conflict? 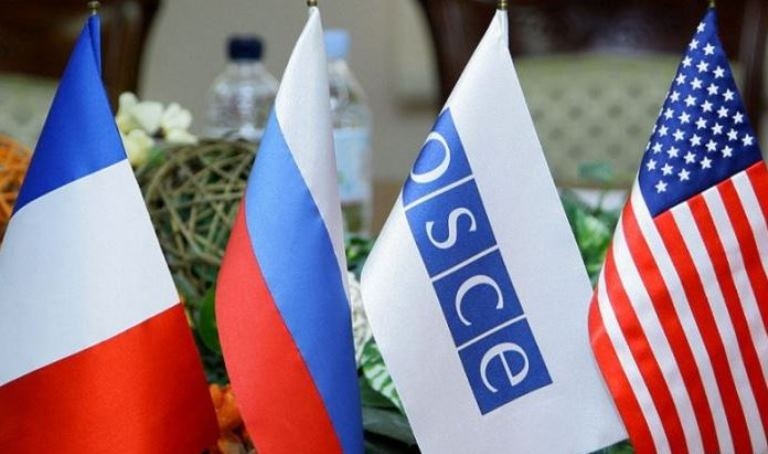 For 26 years, the Minsk Group of the Organization for Security and Co-operation in Europe (OSCE) worked fruitlessly to bring the Armenian-Azerbaijani conflict to a peaceful resolution. Then, in just six weeks, the Second Karabakh War radically altered the conflict and the Minsk Group was shunted aside.

Russia now dominates both the implementation of the November 10 ceasefire declaration it brokered with Armenia and Azerbaijan, as well as the security arrangements underpinning it. Turkey has managed to secure a supporting role. Reduced to trailing in Russia’s wake, the Minsk Group is now facing – like no other actor engaged in this conflict – a crisis of relevance.

This crisis is often framed in terms such as “why did the Minsk Group fail?” This, however, attributes more agency to the Minsk Group than it actually had – or at least had had for a very long time. Perhaps a more relevant question would be: Why did multilateral diplomacy become so irrelevant to the resolution of the Armenian-Azerbaijani conflict?

There are of course many answers to that question, ranging from the normative ambiguity of the Minsk Group’s attempts to balance the countervailing principles of self-determination and territorial integrity; its secretive, narrow and top-down modus operandi; and its default to performative over substantive diplomacy since 2011. Occasional summits in far-away capitals with little or no interaction in between made the peace process alien to Armenian and Azerbaijani societies, even though they are the ones with the most direct stake in a resolution.

Beyond these issues, however, the Second Karabakh War crystallized a long-accumulating and now decisive shift: the sweeping aside of the multilateral diplomacy represented by the Minsk Group by multipolar power dynamics.

Few institutions in international relations today are as evocative of the post-Cold War, end-of-the-century moment as the Minsk Group, which came into being at the intersection of two processes: the first Armenian-Azerbaijani war, and the institutionalization of a new regional security architecture following the collapse of the Soviet Union.

In March 1992, less than three months after the Soviet Union had collapsed and just as the first Karabakh war was escalating into a vicious large-scale war, what was then the Conference for Security and Cooperation (CSCE) took up the mediation of the conflict. As the CSCE then evolved into the OSCE, its mediation of the Armenian-Azerbaijani conflict was institutionalized into an assemblage of instruments: the personal representative of the Chair-in-Office (PRCiO), the High-Level Planning Group (HLPG) and the co-chairs of the Minsk Conference, the proposed venue for the negotiations.

This was a haphazard process and several elements did not end up fulfilling the purpose they were intended for, or even happening at all. The Minsk Group was originally intended to be a preparatory body doing the groundwork for the Minsk Conference. But as dynamics on the battlefield became ever more intractable, the conference was deferred (it ultimately never took place) and the preparatory body became the mechanism to mediate the conflict.

In 1997 France, Russia and the United States were designated as permanent Minsk Group co-chairs. This formation brought three United Nations Security Council members together, presumed to give any potential settlement authoritative endorsement and enforcement capacity. In the optimistic 1990s, that looked like an indispensable asset. But it also brought geopolitics into the heart of the mediation structure and by the realist 2010s, that looked like a serious drawback.

The Minsk Group’s unintentional design mattered because of the OSCE’s consensual decision-making practice. This codified unipolar-era ideals of mutual trust and shared values in an egalitarian international order. But it prevented the Minsk Group from modernizing its mandate to keep up with evolving realities. Since 2014, the OSCE’s modest ceasefire monitoring architecture has been unable to keep up with growing instability and escalations along the Line of Contact. Yet efforts to modernize the PRCiO’s mandate were resisted or received only lip service, even after April 2016’s “four-day war” clearly demonstrated the need for such reforms.

Consensual decision-making also allows the OSCE’s 57 member-states, which of course include Armenia and Azerbaijan, to use veto powers. This cost the OSCE its last permanent field presence in the conflict-affected states, when its office in Yerevan was closed in 2017 following Azerbaijani objections to its support of de-mining activities in Armenia (the OSCE’s mission to Azerbaijan was downgraded in 2014 and closed in 2016). In 2020, as tension mounted between Armenia and Azerbaijan, various objections raised in the OSCE by Azerbaijan, Tajikistan, and Turkey contributed to a protracted leadership crisis that weakened the organization.

The principle of consensus reflected 1990s assumptions of convergence in international relations. But it also meant that the OSCE could only be as strong as its participating states allowed it to be.

The period between 1997 and roughly 2007 was the heyday of the Minsk Group. Through its mediation, the sides seriously discussed several successive proposals, spanning the spectrum of possible solutions to the conflict, from solutions based on the preservation of territorial integrity to territorial exchange. None, however, proved viable.

The Minsk Group, meanwhile, was not operating in a vacuum but in a shifting global context transitioning from post-Cold War unipolarity and a liberal international order to growing multipolarity, the rise of regional powers and multiplying illiberal models for managing conflict. Global opinion and the United Nations Security Council repeatedly fractured over how to manage conflict in Sri Lanka, Sudan, Kosovo, Libya, Syria and Ukraine. Post-Western challengers Russia and China, and more recently Turkey, openly rejected liberal norms and managed their own internal conflicts through illiberal alternatives.

In the light of these developments, the founding premises of the Minsk Group’s existence and ostensible source of its authority – that responsible states work together to resolve conflicts according to liberal principles, that these principles could solve conflicts in the post-socialist space, and that Russia could be woven into Euro-Atlantic structures – were no longer credible. In an era of growing multipolarity, the Minsk Group became an artifact of the end-of-century unipolar moment.

Assumptions of great power coordination within the Minsk Group also proved false, as France and the U.S. increasingly deferred to de facto Russian leadership. Russian Minsk Group co-chairs tend to stay in their post far longer than their French and American counterparts. The current Russian co-chair, Igor Popov, has been in post for 11 years; his predecessor Yuri Merzlyakov was in the job for seven. As a result, the vaunted combination of three Security Council members was more imagined than real. While individual French and American diplomats have served distinguished terms, neither Paris nor Washington has devoted serious attention to this conflict since 2006. Leadership of the group thus defaulted to Russia, the outside power most invested in preventing all-out war but least invested in a liberal peace.

As a result, the Minsk Group increasingly acted more as a symbol of cooperation than as a practice of unified mediation. This symbolism was only accentuated by the sharpening of the Russian-Western rivalry in post-Soviet Eurasia in the late 2000s. The Minsk Group became the exception that proved the rule.

The Minsk Group’s mediation process was not only eroded from above, as a result of the top-down pressures generated by the shift to competitive multipolarity, but was also hollowed out from within by the parties to the conflict themselves.

Minsk Group mediation and the Basic (‘Madrid’) Principles that were the foundation of its efforts are founded on liberal mechanisms for resolving contested politics within a framework of rights, public participation, electoral mechanisms such as referendums, and so on. Yet the viability of these mechanisms was increasingly undermined over time by the strategies pursued, to variable extents, by Azerbaijan and, until 2018, Armenia. In different ways these strategies were founded on illiberal practices that were completely at odds with the liberal values assumed in the logic of the Basic Principles.

These strategies can be understood as “authoritarian conflict strategies” that do not seek to de-escalate or terminate conflict but rather to exploit it as a domain for the development and deployment of practices reinforcing existing power hierarchies. Confining participation to a hyper-narrow elite, communalizing conflict as inherent and identity-driven rather than situational and interest-driven, and coercing populations to fall in behind such narratives are all examples of such strategies.

In many ways these strategies set the stage for the Second Karabakh War. The decisive shift came, however, through another characteristic feature of multipolarity: the emergence of alternative patrons willing and able to provide public goods to clients frustrated or threatened by the liberal order.

Azerbaijan’s frustration with fruitless OSCE mediation and selective acceptance of the Basic Principles dovetailed with Turkey’s efforts to establish itself as a regional power and Turkish willingness to act as an active new source of military – rather than just moral – patronage of Azerbaijan’s cause. This willingness is, in turn, linked to Turkey’s own transformation from an established member of Western structures to an aspiring regional power coordinating with other emerging powers in a post-Western multipolar order.

The OSCE Minsk Group’s experience calls into question end-of-the-20th-century assumptions about how conflicts would be dealt with. Its experience reflects poorly on 1990s beliefs, both naïve and hubristic, that hegemonic norms of liberal ordering would disseminate across global ‘peripheries’. Instead, the multi-facing periphery of the South Caucasus reverted to a recursive historical pattern whereby local strategies intersect with hegemonic ambitions of regional powers to reproduce a fractured region.

The Minsk Group’s future remains unclear. As the group reminded us in an April 13 statement, it retains the OSCE mandate to mediate in the Armenian-Azerbaijani conflict and called for “a final comprehensive and sustainable settlement on the basis of the elements and principles well-known to the sides.” Most of those principles – territorial withdrawals, the deployment of peacekeepers, the establishment of a corridor connecting Nagorno-Karabakh and Armenia and a right of return for displaced communities – have already been implemented, or the preconditions for their implementation established, under the terms of the Russian-Armenian-Azerbaijani ceasefire statement of November 10, 2020.

The conspicuous exception is the core issue contested by Armenians and Azerbaijanis: the status of Nagorno-Karabakh. Azerbaijan has declared the issue resolved. That is, from Baku’s perspective Karabakh is an ordinary province of Azerbaijan like any other and reengaging with multilateral diplomacy would be tantamount to letting the status issue in through the back door, since the OSCE mandate is predicated on the idea of a comprehensive peace agreement.

It seems that, for now at least, Baku prefers to go it alone and negotiate under the auspices of Russia’s trilateral process with Armenia. This perhaps reflects a belief that – unusually among post-Soviet states confronting secession – Azerbaijan does actually have cards to play with Russia. In the future, however, asymmetries between Russia and Azerbaijan may drive a new reckoning with geopolitical peace-making and create a new opening for multilateral diplomacy.