Restoring the museum as a mosque fulfills the vision of Erdogan’s favorite conservative thinker. 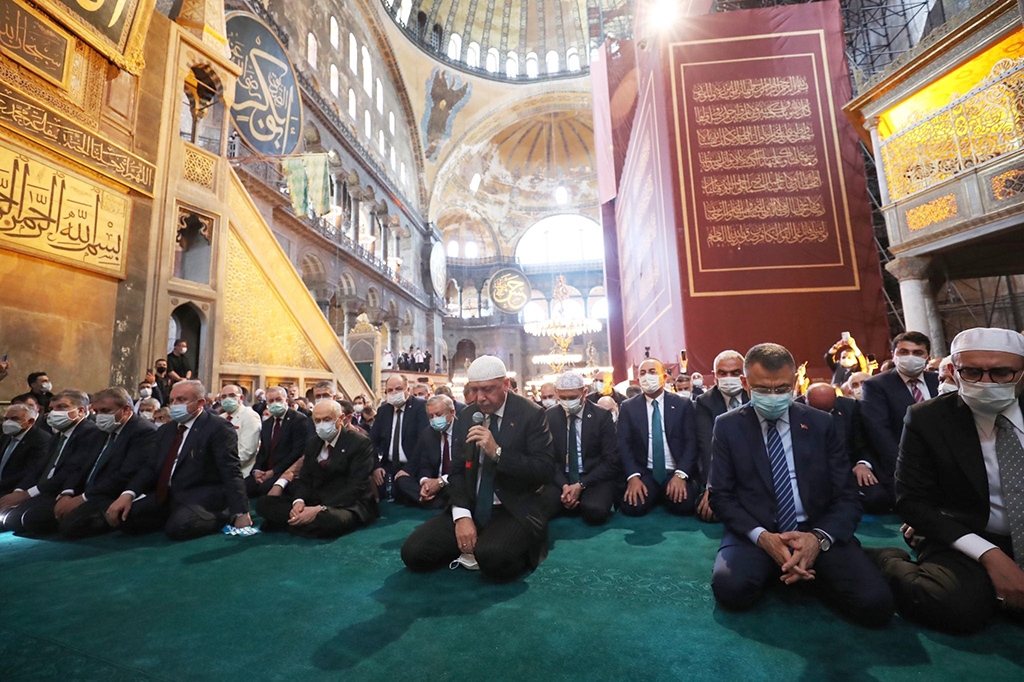 Erdogan reciting verses from the Koran before Friday prayer at the Hagia Sophia on July 24. (photo: Presidency of the Republic of Turkey)

Hagia Sophia, Istanbul’s architectural wonder on the Bosporus, on July 24 was the scene of Friday prayers for the first time in over 80 years.

The services occurred a few weeks after Turkish President Recep Tayyip Erdogan restored the status of Hagia Sophia as a mosque, after it had served as a museum since the early 1930s. Minutes after the announcement of the status change, Berat Albayrak, Erdogan’s son-in-law who also happens to be the country’s finance minister, tweeted a line from a poem by Necip Fazıl Kısakürek: “Wait for it, folks! Either today or tomorrow, Hagia Sophia will be opened!”

Kısakürek (1904-1983) is not just any poet; arguably, he is the 20th century Turkish intellectual whom Erdogan most reveres. The tweet confirms the revolutionary (or perhaps more accurately counter-revolutionary) motivation for Erdogan’s actions.

The restoration isn’t an ad hoc maneuver to boost Erdogan’s sagging popularity, it is a part of his long-term plan to de-construct Turkey’s secularist model and create a new Islamist Turkey in its place.

Hagia Sophia has dominated the skyline on the old Stamboul side of the Golden Horn for almost 1,500 years. Built in 537 under the Byzantine emperor Justinian I, the basilica has a colorful history. In 1204, Crusaders sacked Constantinople and converted the (Orthodox) cathedral into a Roman Catholic church for a few decades. In 1453 Ottoman Sultan Mehmet II turned Hagia Sophia into a mosque after his conquest of Constantinople. Four great minarets were soon added to the structure. For the next 500 years, it was known as Ayasofya Camii. After Kemal Ataturk founded the Turkish republic, forging the secular system that stabilized the country after decades of upheaval, the government transformed the majestic edifice in 1934 into a museum. It was this act that Erdogan reversed.

The latest transformations – museumification of the mosque and its subsequent reconversion as a Muslim place of worship – reflect the continuing struggle between secularist and Islamist forces in contemporary Turkey.

By closing Ayasofya, the country’s most prominent mosque, and turning it into a museum, the Republic’s secular elites made a three-pronged political statement. First, they demonstrated their dominance over the “obscurantist” Muslim religious establishment that stood in the way of radical social transformation and modernization. Second, converting the building into a cultural heritage site, open to representatives of all religious denominations, highlighted the republican governing elite’s aspiration to make Turkey part of what Ataturk liked to call “modern civilization.” Finally, it was a bold diplomatic move intended to improve Turkey’s relations with neighboring Christian Orthodox states, namely Greece.

The Kemalists’ ideological archrivals – members of Turkey’s conservative Sunni elite – have always been critical of Ataturk’s secularization of Hagia Sophia. In their eyes, its status as a mosque was the most salient symbol of the Ottoman Empire’s grandeur.

One of the most outspoken conservative intellectuals at the time was Necip Fazıl Kısakürek. Back in 1965, he voiced disgust at the museumification: “Ayasofya is being torn from its spirit by the hands of so-called Turks,” he wrote. “From its walls the name of Allah and his prophets’ sacred names are being scraped; the interior plasters are removed to expose the heathen images [Orthodox mosaics covered by the Ottoman conquerors]; and it is being turned into a museum to expose the greatness of the cross rather than the crescent, in other words. It is being turned into a sarcophagus where Islam is buried.”

Kısakürek is a curious and controversial personality. A scion of a well-heeled old Ottoman family, he studied in Constantinople’s best French- and American-style schools during the twilight years of the Ottoman Empire. He later went to France on a government stipend right after the establishment of the Turkish Republic. In Paris, he studied philosophy at Sorbonne under Henri Bergson. It seems that in the mid-1920s he lived a Rive Gauche bohemian lifestyle – drinking hard and gambling – but soon after his return to Turkey he underwent a spiritual crisis and tuned his back on the West.

At home, Kısakürek became a vocal critic of Kemalist-led secularist modernization. Instead, he championed an “Islamic revolution” that, he contended, would “enable the full reversal of Kemalism.” Ironically, Kısakürek’s preferred methods to implement his Islamist vision mimicked Ataturk’s ruthless etatism and social engineering. Like Ataturk’s actions in the name of secularism, Kısakürek supported the use of state institutions, the education system, mass media, and the courts as “vehicles” to create a “new, pious youth.”

As a student in the 1970s, Erdogan greatly admired Kısakürek’s writings. When his philosophical idol died in 1983, the 29-year-old Erdogan was among the thousands of mourners at Kısakürek’s funeral in Istanbul. Twenty years later Erdogan’s Islamist-leaning Justice and Development Party (AKP) won national elections and he became prime minister. In a 2002 interview, Erdogan named Kısakürek as the “most important world figure” who shaped his political outlook. Over almost two decades in power, Erdogan has followed Kısakürek’s ideological blueprint, using all the levers of state power to implement his Islamist vision.

Erdogan’s move to reconvert Istanbul’s Hagia Sophia was no random act. It has followed a consistent pattern. Turning old Byzantine church-museums back into mosques has been part of the AKP’s wide-ranging conservative program for at least a decade.

In 2011, for example, the Hagia Sophia in Iznik (Nicaea) – a museum since the 1970s – was reopened as the Ayasofya mosque. Next was the Hagia Sophia mosque in Trabzon, which was transferred to the authority of the Directorate of Religious Affairs, having served as a museum under the Culture Ministry for 52 years.

Soon after these two Hagia Sophias were reopened as mosques, Bulent Arinc, a prominent conservative politician and one of the AKP’s co-founders, mused about the destiny of their most famous namesake in Istanbul, directly referring to it as a mosque. “We are now standing next to the Hagia Sophia Mosque,” he said in November 2013. “We are looking at this sad Hagia Sophia but, God willing, we will see it smiling again very soon.”

That day arrived on July 24.

Istanbul’s Hagia Sophia reconversion is a major step toward fulfilling what Erdogan and other conservatives have characterized as their historic mission of “great restoration.” The “New Turkey” they are building is supposed to be the undisputed leader of the Sunni world – much as the erstwhile Ottoman Empire had been before its demise in the early 20th century.

This neo-Ottomanist vision represents the antithesis of the secular Turkish state envisioned by Ataturk. Erdogan’s timeline is also noteworthy: He and his political allies want to achieve “the normalization of the past” by the centenary of the establishment of the Turkish republic in 2023.

With his decree on Istanbul’s Hagia Sophia, Erdogan has helped cement his political legacy. Any future Turkish leader who tries to overturn Erdogan’s action will face an uphill fight, given that Hagia Sophia’s reconversion was framed not only as an act of “historical justice” but as an expression of the “will of the people.”