The roots of today’s revival are found in the late 1960s and early ‘70s, when circles of nonconformist creative youth emerged in cities like Kyiv and Lviv. 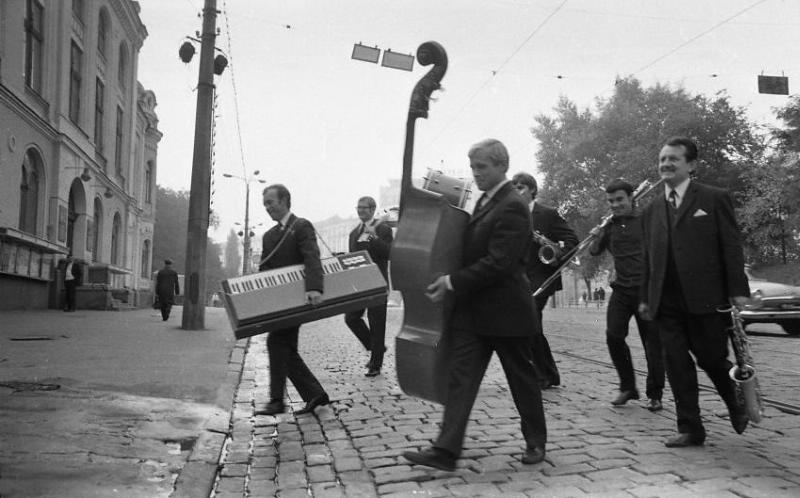 Musicians in Kyiv in the 1960s. (Moscow House of Photography)

The collapse of the Soviet Union in 1991 marked a turning point for Ukraine’s cultural identity, which had been vigorously suppressed during the Soviet era. Independence enabled a cultural and linguistic revival along with open debates about the nation’s history that earlier could only take place outside of Ukraine or, clandestinely, within it.

But in the early years following independence, cultural explorations generally lacked support from centers of power, including the Ukrainian government. The true catalyst for the revival was the dedication of generations of Ukrainian intellectuals who, despite being marginalized and persecuted for decades, worked hard to preserve Ukrainian identity in the 20th century. Arriving with independence was the challenge of tackling the country’s Soviet legacy.

The Ukrainian cultural renaissance that arose in Soviet Ukraine in the 1920s was brutally halted with arrests and purges in the 1930s by Joseph Stalin, who was suspicious of this rapid and diverse development of Ukrainian art. A distinct, dynamic Ukrainian identity posed a threat to his favored concept of one, centralized, Russian-dominant, Soviet culture in the USSR. Later, during the Khrushchev Thaw, some Ukrainian cultural leaders resisted continued systematic Russification in the USSR by attempting to work within the system and defend the right to cultural activity that was purportedly guaranteed by the Soviet constitution. By the mid-1960s, authorities responded by cracking down and dispatching some of the most active nationalists to labor camps.

The roots of today’s revival are found in the late 1960s and early ‘70s, when there existed in urban centers in the Ukrainian SSR, especially Kyiv and Lviv, circles of nonconformist creative youth. These young men and women, having witnessed the arrests and suppression of their predecessors, had no illusions that they would be able to freely express themselves within the official Soviet cultural context. Dubbed the simdesiatnyky, or members of the ‘70s generation, they went underground, both figuratively, and literally (often into basements), to surreptitiously create Ukrainian culture free of communist constraints.

These young artists led a parallel existence as they developed, shared, and critiqued their art outside the restrictions of official Soviet culture. For example, in Lviv, one circle gathered around the poet Hrtysko Chubai, and his basement became a forum for presenting new poems, songs, and paintings, as well as for exchanges of contraband literature. The poems were often not printed, but recited, for fear of leaving a trace of the forbidden. A synthesis ensued when a young musician, Viktor Morozov, started setting these poems to music, launching a phenomenon of late 20th century Ukrainian culture.

The artistic generation that emerged during the twilight of the Soviet Union in the 1980s benefitted from the campaign of glasnost, or openness. This generation was able to access previously banned segments of Ukrainian history and culture that were gradually being rehabilitated under the glasnost campaign. And although censorship still existed, there was greater leeway in what could be published.

When independence arrived in 1991 the opportunity arrived for the first time since the late 1920s to create art without onerous restrictions. The ‘80s generation, having been given the example of the simdesiatnyky in producing independent culture, benefited from several opportunities simultaneously: the ability to create, present, and publish freely; access to previously banned Ukrainian cultural achievements and scholarship; and sudden, open access to the West.

Ukrainian society in the early 1990s was enamored with anything that was new, anything that represented change, and anything connected to the West. As a result, members of the ‘80s generation found themselves at the center of new cultural movements in the early years of independence. Some of the them, like the members of literary trio BuBaBu, (an acronym for burlesk-balahan-bufonada; burlesque-farce-buffoonery), were actually at the center of mass gatherings of youth. They addressed previously-taboo topics in their writings and in their plays (including eroticism, rock music, and urban motifs) and enthusiastically experimented with form. Well versed in the power of performance, and actively blending their writing with other cultural genres (music, visual art), the group’s guiding concept of polyphony and carnival fit well with the times.

Two schools of thought developed in the first decade of independence. Many of the best prose works of the 1990s took aim at deconstructing inherited myths – both colonial Soviet/Russian and Ukrainian national. Volodymyr Dibrova’s novel Burdyk is one that does so with particular virtuosity. Freedom of expression, devoid of ideology and of politically mandated conformism, was the priority the ‘80s generation: any structures that interfered with it were figuratively dismantled.

These literary works sought to create a post-Soviet Ukrainian identity that drew upon an array of historical and cultural artifacts and reassembled them to try to fit the new age. Given that for many years Ukraine’s past had been manipulated so that official histories presented falsehoods as facts, writers of the ‘80s generation challenged the concept of assigned truth in their prose.

Although such Western post-modern concepts proved to be attractive for some young Ukrainian authors, other writers, such as those of the Zhytomyr School, espoused a more introspective approach toward examining Ukrainian culture and creating new frameworks for national identity. With Ukrainian identity still marginalized in post-Soviet Ukraine, they feared that the cultural edifice was too fragile to withstand a post-modernist wrecking ball. V’iacheslav Medvid and his novel Lokh (the Cellar) are perhaps the best-known example of this school.

What resulted was a spirted and open debate on Ukraine’s post-Soviet identity and culture among many of its most talented creative individuals. It was the type of public discussion that was prevalent, even customary in a free society, but one which was novel for Ukrainian intellectuals, given the Soviet legacy.

It did not take long for leading members of the ‘80s generation to embrace the role of public intellectuals, both inside and outside the country. Many of them spent time at Western academic and cultural institutions, and they represented their country at various international events.

Oksana Zabuzhko and Yuri Andrukhovych, Ukraine’s leading prose writers at the time, helped lead the way as explorers of new cultural terrain, using their exposure to Western institutions and thinking to inform their own creative output.

A major theme in many of Zabuzhko’s post-Soviet works was the Ukrainian woman in an independent society, placing feminist discourse at the center of contemporary Ukrainian culture. Her bold and honest descriptions of Ukrainian women initially shocked audiences and inspired future women writers. Meanwhile, many of Andrukhovych’s early post-independence works fostered nostalgia for a pre-Soviet, European Ukraine – one that could be seen in much of the country’s architecture, especially in Western Ukraine, but was absent from the Ukrainian Soviet identity. In his writing, Andrukhovych tirelessly, yet playfully, promoted Ukraine’s European heritage and future in Europe.

As Ukraine’s independence progressed into its second decade, the literary scene expanded with new writers emerging from all corners of the country. Taras Prokhasko, a writer from the foothills of the Carpathian Mountains in Western Ukraine, offered hyper-personal reflections on nature and memory in idiosyncratic fable-like tales presented in a delicate, contemplative tone. At the other end of Ukraine, in Kharkiv, Serhiy Zhadan, today one of the country’s most prominent poets, began his climb to fame as the writer who ended up awakening the eastern part of the country to its Ukrainian essence. Zhadan led his readers to corners of loneliness occupied by disoriented, post-Soviet Ukrainians searching for their place in a world turned upside down. His poetry is lyrical with occasional jarring, unexpected metaphors, while his early prose often employed humor, depicting individuals taking on responsibilities they were unqualified for.

For the first two decades of independence, the Ukrainian government did little to support the development of Ukrainian culture. Even so, new artists continued to emerge and make their mark. Starting in the early 2000s, the themes explored by the ‘80s generation gave way to more inwardly personal works by younger writers. For example, Sophia Andrukhovych, Yuri’s daughter, brought a fresh perspective to the nostalgia inherent in her father. For these young writers, the world beyond Ukraine’s borders was no longer a fascinating, unknown realm, but one that was readily accessible. Their viewpoint was never overly burdened by the Soviet legacy.

The Euromaidan Revolution of 2013-14, in which mass popular protests caused the downfall of then-president Viktor Yanukovych’s corrupt administration, catalyzed cultural developments in new and unprecedented ways. Russia’s reaction to Euromaidan – its occupation of Crimea, and its support for a separatist conflict in the Donbas region – caused culture to make a sharp turn. War-related themes, especially the need to resist war fatigue, became central to the work of young Ukrainian artists and writers such as Lyuba Yakimchuk and Artem Chekh. In addition, the concept of borderland, so crucial in Ukraine’s identity throughout its history (and even in its name), once again become a cultural hot topic.

Euromaidan also impacted the political leadership’s approach toward arts and culture. For the first time since independence, Ukrainian political leaders after 2014 started providing substantial support for the development of Ukrainian culture, including the establishment of organizations such as The Ukrainian Institute and the Ukrainian Book Institute.

Ukrainian cinema likewise has experienced a broad renaissance over the past five years, and Ukrainian book publishing has thrived. Tellingly, bookstores are now filled with volumes of new translations of world-renowned authors into Ukrainian, a trend that is important for ensuring the language’s development, and one that had been programmatically curtailed in the past. In addition, Ukrainian authors themselves are increasingly being translated into many of the world’s languages, opening new avenues for cultural exchange. The number of translators rendering contemporary Ukrainian literature into English has increased exponentially in the past five years. More publishing houses in the West are producing works that feature contemporary Ukrainian literature, including the Lost Horse Press Contemporary Ukrainian Poetry Series and the Academic Studies Press anthologies, The White Chalk of Days and Words For War.

Ukrainian culture has managed to thrive since 1991, despite all the economic uncertainty and dysfunction and generally weak political leadership. Artists and writers have proven irrepressible in engaging in vibrant and open explorations of universal concerns, such as memory and identity. Ukraine’s tumultuous past and present provide the country’s creative class with exceptional material. Their art will undoubtedly continue to be driven by the opportunity to create freely that arrived with the Soviet Union’s collapse.