Since shepherding Azerbaijan’s military victory last fall, Turkey has been on a Silk Road charm offensive. The challenge is turning talk into action. 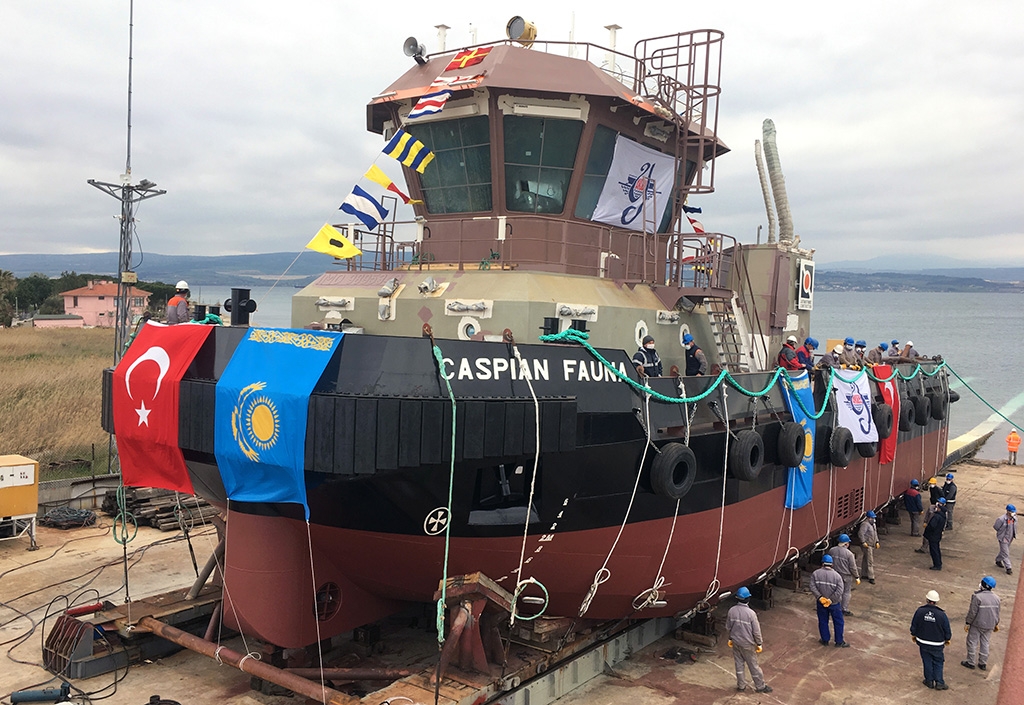 A slow boat (halfway) to China (photo by Gelibolu Shipyard)

With Turkey’s economy lurching from crisis to crisis, Ankara appears to be reconsidering its previous feeble attempts at staking a place on China’s Belt and Road Initiative. Azerbaijan is a key cog in the plans.

In 2015, Turkey proposed itself as the starting point for a "Middle Corridor" – stretching through the Caucasus and Central Asia – on the BRI, calling it the fastest route between China and Europe. Turkey worked with Azerbaijan, Kazakhstan and Turkmenistan to facilitate trans-Caspian Sea routes and opened the Baku-Tbilisi-Kars railway across the Caucasus in 2017.

Other than that, there is little to show for this Middle Corridor. In fact, over the last three years, Turkey has increased customs duties and import quotas that directly impact China more than any other country, according to Global Trade Alert, a monitoring group. No wonder bilateral trade has fallen.

Turkey’s decisive role in Azerbaijan’s victorious war against Armenia last year has the potential to breathe new life into the Middle Corridor. For the first time, Turkey asserted itself as a military power in the former Soviet Union. Foreign Minister Mevlut Çavuşoğlu’s visit to Central Asia this month looked something like a victory tour.

The challenge for Ankara is to turn talk into action.

Just two months after the November ceasefire in Nagorno-Karabakh, Turkey signed a new trade deal with Azerbaijan. Billed as a "preferential trade agreement," it is far less comprehensive than announced, only reaffirming that Turkey has granted Azerbaijan “most favored nation” status. It covers a mere 30 of 5,000-odd categories of tradable goods.

The contribution to bilateral trade will be minimal, though optimists see this as a precursor to more cooperation. A passport-free travel agreement inked in December should boost bilateral trade by encouraging people-to-people contact.

Further east, Turkey stands to benefit from Azerbaijan and Turkmenistan’s January agreement to jointly develop the Dostluk gas field under the Caspian Sea. The gas should flow through Georgia and Turkey to Europe. Turkey then hosted a trilateral meeting with the Azerbaijani and Turkmen foreign ministers on February 23.

Ankara also resurrected dusty plans for a regional trade agreement during a March 4 virtual meeting of the so-called Economic Cooperation Organization, a club formed in 1985 to facilitate trade among Turkey, Iran, and Pakistan. Since expanding into the Muslim former-Soviet republics in the late 1990s, the ECO has achieved little – which Erdoğan highlighted while calling for trade to double by 2025.

A lack of something concrete to show for all the talk is a recurring theme in Turkey’s efforts to seek influence east of the Caspian. At the fall of the Soviet Union, Ankara quickly recognized the independence of the new republics, fellow Turkic-speaking nations. It created the Turkish Cooperation and Coordination Agency in 1991 to increase cultural and economic ties and then the Turkic Council in 2009. Yet these are merely talk shops. Besides a prominent role for Turkish construction firms, and a few schools targeting a small elite, Turkey remained deep in Russia’s shadow and never presented a feasible long-term plan.

While Turkey was talking, China was establishing itself as the undisputed economic hegemon in Central Asia. It has more recently been catching up in the Caucasus.

China has tried to establish stronger ties with Turkey, but for all its investments in industry, energy, transportation and telecoms – the first train from China arrived to much fanfare in Ankara in late 2019 – the big deals don’t seem to materialize. Talk on China modernizing Turkey’s railroad network never went anywhere; same with negotiations on a third nuclear power plant. As Selçuk Çolakoğlu of the Turkish Center for Asia-Pacific Studies wrote this month, Ankara is wary of offering lucrative contracts to Chinese firms it sees as competitors.

Yet Turkey and China are both increasingly at odds with the West – a reason for comradery.

Long before some Western nations began to call the atrocities in China’s western Xinjiang region “genocide,” Erdoğan beat them to the punch. “The incidents in China are, simply put, a genocide. There’s no point in interpreting this otherwise,” he said in July 2009.

Since then, China has dramatically scaled up its repression, turning its western Xinjiang region into the world’s biggest prison camp, detaining roughly a million Turkic Uyghurs, Kazakhs and Kyrgyz. And Erdoğan has done an about-face. In May 2019, the Turkish parliament ratified an extradition treaty with China, increasing fears that it will deport Chinese Muslims to guaranteed mistreatment at home. The next month, Beijing delivered a $1 billion currency infusion.

The countries along Turkey’s Middle Corridor have not missed the message: Stand with China and there will be investment. Though the repression just across their eastern borders puts the Central Asian republics – no standard-bearers for human rights – in a tricky spot, the governments publicly support Beijing.

The question now is if Turkey will build on the momentum it has established with Azerbaijan by reducing barriers and other impediments to its own vision for a trade corridor reaching all the way to China.