Perspectives | Turkey and Russia: The paradox of family resemblance

The likelihood that Turkey and Russia can establish a long-term strategic alliance isn’t high, argues this commentary. In part, that’s because both see themselves as empires. 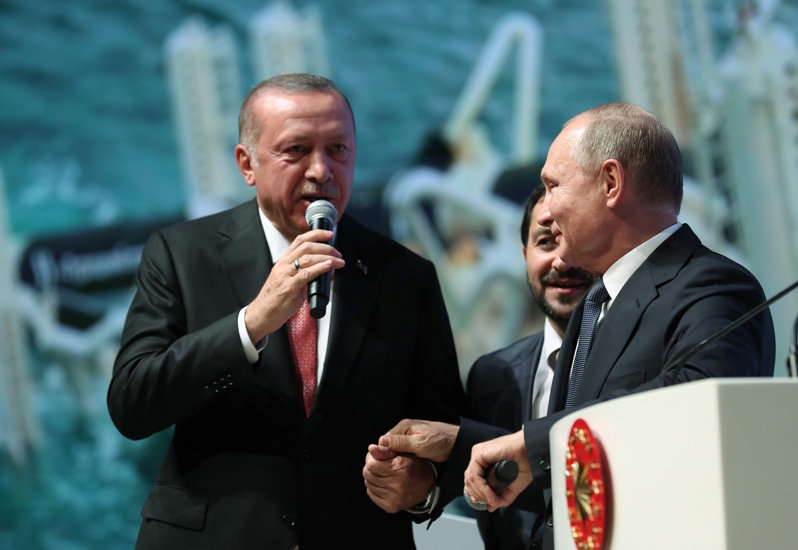 Vladimir Putin’s Russia and Recep Tayyip Erdogan’s Turkey have grown close over the past year, brought together by the gravitational force of illiberalism. Yet paradoxically, the similarities in their strategic cultures mean that their seemingly flourishing entente is fragile.

In her epic work, Alatli – a best-selling writer, prominent public intellectual and staunch supporter of Erdogan – creates a complex and colorful tableau in which Russian and Turkish history is intertwined. In 2,000 pages she revisits the works of Russian literary titans, including Gogol, Dostoevsky, Nabokov and Solzhenitsyn, and interprets their insights into Russia’s (and Turkey’s) turbulent transformations past and present. At the heart of Alatli’s narrative is the perennial clash of the two principal intellectual strands – Westernizing and nativist ones – and their quest for the “authentic” Russia.

Readers follow Russia’s trials and tribulations through the eyes of the narrator (and Alatli’s alter ego) – Turkish-Muslim female intellectual Guloya Gurelli – who actively participates in the heated Russian debates. At the same time, she is haunted by a related problem: where to find the “authentic” Turkey – in its Islamic past, or in its quasi-European present? The novel’s conclusion is unambiguous: the glory and grandeur of historic Russia and historic Turkey should be sought not in the Enlightenment-based foundations of modern Western civilization, but in the distinct spiritual principles of Russian and Turkish/Islamic civilizations respectively.

It would seem that by gifting Alatli’s book, Erdogan sought to draw Putin’s attention to the striking similarities between Russia and Turkey. More specifically, his aim may have been to underscore that the Turkish-Russian relationship, which, in Erdogan’s own words, has now reached its “peak,” rests not only on beneficial trade and energy deals, but also on a similar political-philosophic outlook.

At its core, Erdogan’s vision is built on the notion that the world is divided into distinct civilizations. And upon that foundation rise three pillars: 1) a just world order can only be a multipolar one; 2) no civilization has the right to claim a hegemonic position in the international system; and 3) non-Western civilizations (including those in Turkey and Russia) are in the ascendant. In addition, anti-Westernism and self-assertiveness are the crucial elements of this outlook.

As Alatli puts it, “We are the ones who have adopted Islam as an identity but have become so competent in playing chess with Westerners that we can beat them.”

Does Erdogan have a point? Yes and no. A comparative analysis of Russia’s and Turkey’s historical experiences indeed seems to have many, broadly shared characteristics. Looking at the persistence of the two countries’ imperial legacies, their continuous grappling with ethnic diversity and nation-building, the patterns of their modernization – as well as how Russia and Turkey historically related to and were perceived by Europe – there are numerous parallels.

The drama of imperial collapse and difficulties of post-imperial readjustment are critical for understanding the mindset governing elites in both countries. In land-based empires, with their blurred borders separating the national “core area” and the periphery, an overarching imperial identity stalls the development of ethnic- or civic-based nationalism and the emergence of a genuine nation-state.

Following the collapse of the Romanov and Ottoman empires amid World War I, the Soviet and Kemalist elites sought to resolve the tension between empire and nation that proved so fatal to the pre-war imperial polities. Yet in contemporary Turkey and Russia the process of nation-building has not been completed, as the very notions of “Turkishness” and “Russianness” are still being vigorously contested. Notably, in both countries the concept of national unity is largely understood as state unity. That means the respective governments feel a need to ruthlessly suppress all separatist forces.

Unlike the “post-modern” EU countries, which delegate powers both upwards and downwards, Turkey and Russia are still very “modern” in that they put a special premium on statist nationalism, centralization and sovereignty.

Historically, Turkey and Russia display the distinct patterns of “alternative modernity,” in which democratic institutions are feeble. The imperial legacy of both states stifled the development of a “checks-and-balances” social-political structure. Today, lingering autocratic tendencies help shape the image of Turkey and Russia as Europe’s Others. According to the outstanding Russian historian Vasily Klyuchevsky, the ways and mores in the Ottoman Empire and Muscovite Tsardom – as seen by Western European diplomats, merchants and travelers – seemed quite similar. “They perceived both Muscovy and Turkey as the Oriental lands,” Klyuchevsky wrote.

Despite their similarities, the likelihood that Turkey and Russia can establish a long-term strategic alliance isn’t high. Both see themselves as empires, and, as a general rule, an empire’s political philosophy is one of universalism and exceptionalism. In other words, empires don’t have friends – they have either enemies or dependencies.

Moreover, an imperial paradigm has traditionally featured the existence of “frontier zones” – buffer territories that are a source of conflict for historical empires. For Turkey and Russia, the Caucasus, the Balkans, and the Middle East serve as such frontier zones.

It is noteworthy that the only period when Moscow and Ankara maintained decent relations for any extended period of time was in the 1920s-1930s. At that time, in the aftermath of WWI and internal conflict, the two enfeebled countries consciously avoided imperial adventures, turned inward and focused on addressing domestic challenges. The revival of Soviet imperial ambitions after 1945 prompted Turkey to seek refuge under the Western security umbrella and join NATO.

These days, both in Ankara and Moscow, the ruling elites are readily deploying imperial tropes, talking of the “New Turkey” and “Russian state-civilization” respectively. Yet while both the Turks and the Russians compartmentalize various aspects of their “multifaceted relationship,” the logic inherent in their strategic cultures undermines the potential for building trust-based relations. The issues over which Moscow and Ankara differ today – Crimea, Abkhazia, Nagorno-Karabakh, Kosovo, Cyprus, Syria – broadly belong to the geography where the erstwhile empires of the Ottomans and the Romanovs clashed over several centuries.

Thus, the stage is set for a repeat of history. It’s only a matter of when the curtain will go up.