Why can’t Ukraine make it over the revolutionary hump? 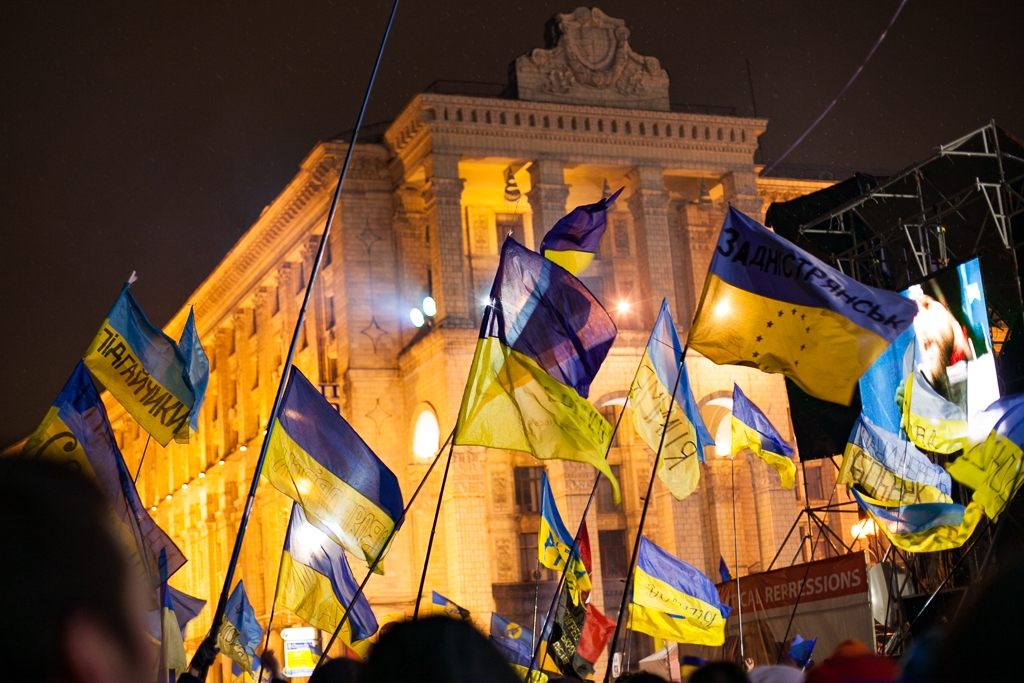 Ukraine’s post-Soviet existence has been marked by social upheaval and political dysfunction. To understand why stability and prosperity has proven so elusive in the country, look at the political and social conditions that governed Ukraine’s transition from communism to independence.

The Soviet Union’s implosion in 1991 caught the elites in each of its 15 constituent republics unprepared. At the time, Ukraine, along with the other republics, lacked a well-developed, inclusive notion of national identity, a mature political culture, pluralistic institutions and wide acceptance of the idea of a loyal opposition. Under such conditions, Communist cadres enjoyed an advantageous position amid the scramble to lead newly independent Ukraine. The competition wasn’t strong.

Ultimately, the momentous events of 1991 can’t be considered the logical conclusion of a protracted and heroic national-liberation struggle, but rather a deal struck by the three major groups comprising Ukraine’s population – communists, nationalists and the mainly Russian-speaking workers in eastern areas.

Communist apparatchiks in Kyiv immediately understood in mid-1991, as the Soviet Union began its slide into oblivion, that the only way to remain on top was to masquerade as arch-nationalists. Doing so enabled them to shake off their Moscow masters and retain full political and economic control.

The old nomenklatura then quickly formed a strategic partnership with genuine nationalists (mostly Ukrainian-speakers in the western regions of the country, leaders of the Rukh nationalist movement, along with some Kyiv intellectuals). In terms of power, these genuine nationalists did not receive anything tangible, but they still got the coveted symbolic prize, Ukraine’s independence.

The Russian speaking majority in eastern Ukraine, along with those in Crimea, also threw their overwhelming support behind independence in the December 1, 1991, referendum. Economics drove the decision: many Russian speakers believed at the time that they would be materially better of being part of the “breadbasket of Europe,” rather than sticking with Russia under a broad union.

Upon gaining independence, Ukraine was effectively an empty shell, not a full-blown nation-state with a distinct identity. With largely unreformed, closeted communists still calling the shots, this shell was eventually filled mostly with specific post-Soviet content: authoritarian politics, crony capitalism, a rigged judicial system and the merger of politics and big business interests that stifled entrepreneurship.

This political reality smashed many of the illusions held by nationalists in the west and Russian-speakers in the east, and gave rise to the revolutionary tendencies of the 21st century.

The 2004 “Orange Revolution” was the first attempt in Kyiv to overcome a post-Soviet condition whose characteristic features were largely a legacy of the communist era and of the first chaotic decade of the country’s post-independence drift. The revolution sought to embrace Western liberal values, and open up Ukraine’s political and economic systems to genuine competition. This attempt failed in large part because of petty political bickering among the victors, paving the way for a venal, pro-Moscow political faction to claw its way to power.

The 2013-2014 revolt that styled itself as Euromaidan was Ukraine’s second attempt to break out of the post-Soviet mold. First and foremost, what Euromaidan stood for was a values-based vision of Ukraine as part of a wider Europe. The fact that most Ukrainians were not aware of the details of Ukraine’s Association Agreement with the EU, and had only a vague idea of how the Brussels bureaucratic bodies functioned, was beside the point. The multitudes in Ukraine who embraced “Europe” amid the Euromaidan uprising simply wanted to put an end to post-Soviet business-as-usual, especially rapacious crony capitalism, corruption, nepotism and the selective application of justice. Most Ukrainians yearned for (and still do) a political class that fosters the rule of law, honors property rights and protects human dignity.

These values aren’t so much European (although, historically, they are) as universal; they appeal equally, and irrespective of concrete cultural context, to a Frenchman, a Ukrainian, or a Russian. Of course, this is why the assertion of Ukraine’s European values-based identity so agitated the Kremlin. It was the universalist implication of Kyiv’s “flight towards Europe” that ultimately prompted Moscow to undertake a sabotage campaign, which included a disinformation offensive, compounded by the land grab of Crimea and the insurgency in Ukraine’s eastern regions. Russian leaders were afraid that a values-based outlook would spread from Ukraine to Russia, and thus threaten their grip on power.

Like most revolutions, Euromaidan raised great expectations. The political fortunes and overall legitimacy of the Ukrainian leadership that swept into power following the upheaval came to rest on its ability to deal with two major challenges: defending the country against Russia’s hybrid blitz, and overhauling the economic and social systems.

Six years on, the outcome of Euromaidan is decidedly mixed. On the war front, Kyiv has ultimately succeeded in thwarting Moscow’s more ambitious geopolitical designs aimed at splitting Ukraine into several parts. Kyiv’s success in stopping the external aggression and keeping the bulk of the nation’s territory intact is a significant achievement, particularly given the dire straits facing the Ukrainian military in the spring of 2014.

All the same, Ukrainian leaders haven’t managed to recover parts of the Donetsk and Luhansk regions lost to Russia-backed rebels, nor find a comprehensive solution to the Donbas conundrum. And the prospects for a solution in the short- and medium-term don’t look promising. The Donbas conflict has devolved into trench warfare, sapping Ukraine of resources that it could use elsewhere, while generating a steadily rising death toll.

On the reform front, the picture is similarly muddled. Arguably, the last five years saw the implementation of the most substantive economic reforms since 1991. But the reforms still have not translated into better living standards for most Ukrainians. According to a recent Credit Suisse report, Ukraine ranks 123rd out of 140 countries measured in terms of its citizens’ median wealth. Education and healthcare reforms have not yet been completed and crucial legal reforms seem stalled.

Grand corruption continues to be perhaps the country’s biggest problem. Polling data show that around 90 percent of Ukrainians believe government corruption is widespread. According to a U.S. State Department assessment, graft remains “pervasive at all levels in the executive, legislative, and judicial branches of government.”

So why can’t Ukraine make it over the revolutionary hump? In Euromaidan’s case, it appears that the movement failed to achieve a critical mass of popular support that could coalesce into an enduring base for reformers. Instead of taking steps to forge such a new movement or political party, many prominent activists who led the Euromaidan revolt chose to join established political organizations. This was, in the words of the Lviv-based journalist and public intellectual Yuri Durkot, a “political failure of the Maidan generation.”

As a result, the old-new elites who came to power during the 2014 electoral cycle pursued a set of policies riddled with ambiguity. On a rhetorical level, the Euromaidan political generation has upheld the objective of Ukraine’s comprehensive “Europeanization.” But a significant segment of the country’s political class, especially those who entered politics prior to 2014, appeared to believe that it was possible to return to “business as usual” once the most odious aspects of the ousted, pro-Kremlin Yanukovych administration had been purged.

In the years following Euromaidan, elite attitudes and popular opinion became increasingly out of synch. Many members of Ukrainian elites had a sense that the revolution had ended, and they basically reverted to their old ways. But large swaths of the Ukrainian population had a radically different vision. For them, the revolution was not over for the simple reason that most of the goals set forth by Euromaidan – in particular, clean government and an independent legal system – have not been achieved.

A recent Gallup poll succinctly captured the popular mood: Ukraine ended up at the very bottom of the list of countries in terms of its citizens’ trust in national government, with only 9 percent of respondents saying they trusted state institutions.

In some respects, Ukraine’s 2019 election cycle can be considered a third revolutionary moment for the country. The elections’ fundamental reshaping of Ukraine’s political landscape served as a clear signal that the ideas that drove the Euromaidan movement were far from dead.

Seen in a comparative perspective, Ukraine’s travails illustrate one simple but important historical truth: a revolution is no mere momentary act of seizing power but a protracted process of societal transformation.

In Great Britain, it was Whig historians who described the 1688 “Glorious Revolution” as the English Revolution, although later historiography would subsume the whole gamut of political upheavals and civil wars between 1640 and 1688 under the rubric of the “Great Rebellion” or the “English Revolution.”

A revolution shook France in 1789, but it would take three more revolutions in the 19th century before the situation in the country became relatively stable after 1871 under the Third Republic.

What is generally termed the Great Russian Revolution was in fact a series of uprisings, conflicts and civil wars that began in 1905 and ended in the mid-1930s when the Stalinist socio-economic system finally emerged. For its part, the demise of communism in Europe – Le passé d’une illusion, in François Furet’s memorable phrase, was itself a long-lasting affair replete with uprisings and rebellions.

Neither Ukraine’s location on the periphery of Europe nor its difficult geopolitical environment was ever conducive to a smooth transition away from communism. So it can’t come as a shock that the pace of revolutionary change is lagging. What’s essential to understand, and indisputable, is the fact that a solid majority of Ukrainians still are eager to make a complete break with the Soviet and immediate post-Soviet legacy.

While Ukraine’s “Europeanization,” as articulated by the Euromaidan revolt, appears to have no alternative, the process is bound to experience stops and starts. Reform-minded Ukrainians still have a great deal of unfinished business to attend to, and there’s no knowing when it will be finished. One thing is clear, however: a solid majority of Ukrainians are in it for the long haul.