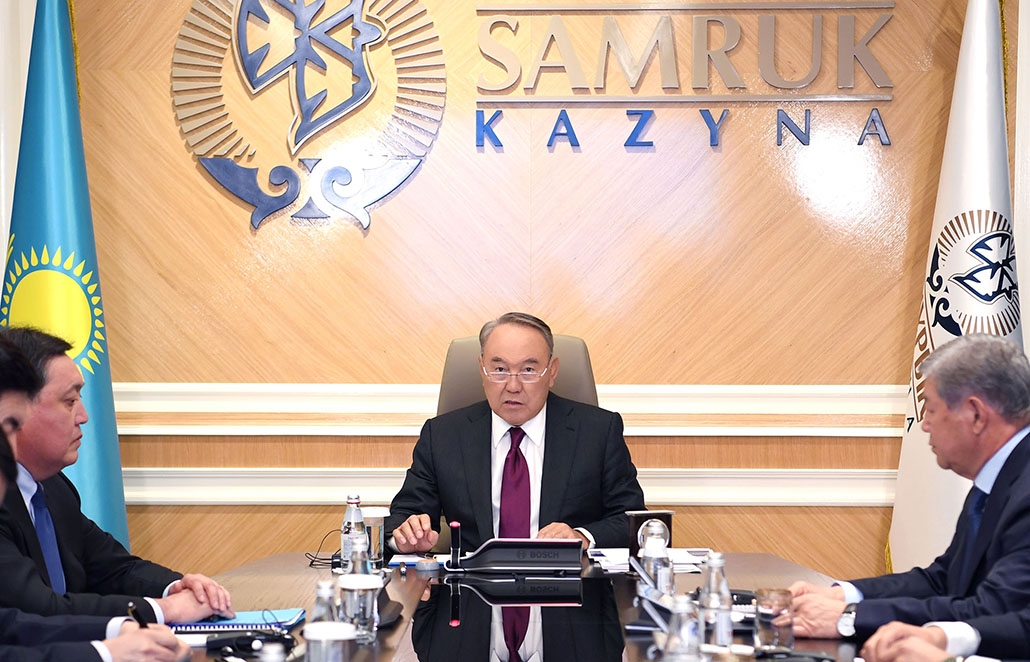 After days of violent unrest earlier this month, Kazakhstan President Kassym-Jomart Tokayev promised to dismantle the networks that control so much of the Kazakh economy built up by, and around, his predecessor and erstwhile suzerain, Nursultan Nazarbayev.

He got to work quickly, beginning with the sovereign wealth fund – Samruk-Kazyna, the key vehicle for managing state assets – by purging two Nazarbayev sons-in-law who sat atop two of its largest subsidiaries.

But it will be harder to pry away the major private businesses that remain intimately connected to the Nazarbayev family. While examples are legion, four of Kazakhstan’s largest firms exemplify these links: Halyk Bank, Eurasian Resources Group, Nova Resources and Kaspi.kz.

Halyk Bank is perhaps the most obvious. It is the country’s largest bank, by some margin. The majority of shares (56.4 percent) are held by the Almex Holding Group, which is controlled by Nazarbayev’s daughter Dinara and her husband Timur Kulibayev. (Kulibayev previously chaired the board at Samruk-Kazyna.)

Halyk has received a windfall of state support in recent years. In 2017, the government spent $7.5 billion helping Halyk’s takeover of its largest rival, Kazkommertsbank. That bailout, the Organized Crime and Corruption Reporting Project (OCCRP) found, came after Kazkommertsbank suffered sizable losses from a series of loans to an investment vehicle in which a man named Sauat Mynbayev was a major shareholder.

At the time of the bailout Mynbayev led state oil giant KazMunaiGaz (90.4 percent owned by Samruk-Kazyna). He was previously a director of the bank, and also held several ministerial portfolios under Nazarbayev including the crucial energy and natural resources ministries.

The comingling of Mynbayev’s and Kulibayev’s interests is not limited to Halyk Bank. In his role at KazMunaiGaz, Mynbayev oversaw the expansion of trading with commodity giant Vitol, whose subsidiary Vitol Central Asia was led by Singapore billionaire Arvind Tiku. The 2014 prospectus of another Kazakh hydrocarbons firm, Nostrum, noted that Tiku and Kulibayev had a shared interest in construction firm KazStroyService Global as well as "other shared business interests," that it did not specify.

Even beyond the first family, the fortunes of Kazakhstan’s largest private resources companies have, like its public ones, closely tracked the relationship between their owners and Nazarbayev.

The three men behind mining giant Eurasian Resources Group (formerly Eurasian Natural Resources Corporation, or ENRC) have long allegedly enjoyed close ties to Nazarbayev. In 2011, Belgian prosecutors settled with the trio – Patokh Chodiev, Alijan Ibragimov and Alexander Machkevitch – ending an investigation into bribery for a pipeline concession; the three paid a fine, but did not admit wrongdoing.

Former prime minister Akezhan Kazhegeldin has claimed the men are proxies for Nazarbayev – allegations they deny. ENRC remains under investigation by the UK's Serious Fraud Office, which is probing "allegations of fraud, bribery and corruption.”

If Tokayev’s “de-oligarchization” plans include fully displacing, or replacing, the system built up around Nazarbayev, such firms and their key shareholders may be targeted as well.

ENRC is not the only Kazakh firm minting billionaires from Nazarbayev’s inner circle, let alone the only one in the mining industry. Another is Kazakhmys, which has likewise had a troubled history as a London-listed firm and faced allegations of corruption.

Kazakhmys was renamed KAZ Minerals in 2014 and ultimately de-listed after being taken private by Nova Resources last year. Nova is controlled by the same pair behind KAZ Minerals and Kazakhmys: billionaire Vladimir Kim and Oleg Novachuk.

Last October, OCCRP reported that Kim was connected to $30 million in offshore payments to Assel Kurmanbayeva, long rumored to be Nazarbayev's unofficial third wife. Also reportedly involved in that effort was another Kazakhmys founder, Vladimir Ni, who served as Nazarbayev's assistant decades earlier.

Nazarbayev’s links to private business extend from the Soviet era to the present, even after he renounced the presidency in 2019.

Kazakhstan has its own tech unicorn, Kaspi.kz, whose major shareholders are chairman Vyacheslav Kim and CEO Mikhail Lomtadze. Whereas ENRC and KAZ Minerals have had to beat retreats from the London Stock Exchange over the last decade, Kaspi.kz debuted on the market in 2020 in what was London's largest tech IPO that year, which valued the firm at $6.5 billion.

Kaspi's shareholders have included Goldman Sachs and Eurasia-focused private equity firm Baring Vostok. Another was Kairat Satybaldy, Nazarbayev's nephew, who sold his interest prior to the London IPO.

Kaspi has denied any continuing links with Satybaldy. Nevertheless, as Kazakh political scientist Dosym Satpayev noted in a 2020 interview with Forbes, in such high-profile cases there is often speculation that a politically connected individual simply moves the shares into the hands of allies.

It is a suspicion often applied to other Kazakh businesses. Whether and how Tokayev reshuffles control will indicate the direction and credibility of his reforms.