It never once mentions China or Russia explicitly, although the shadow of those countries looms ever-present over the document. 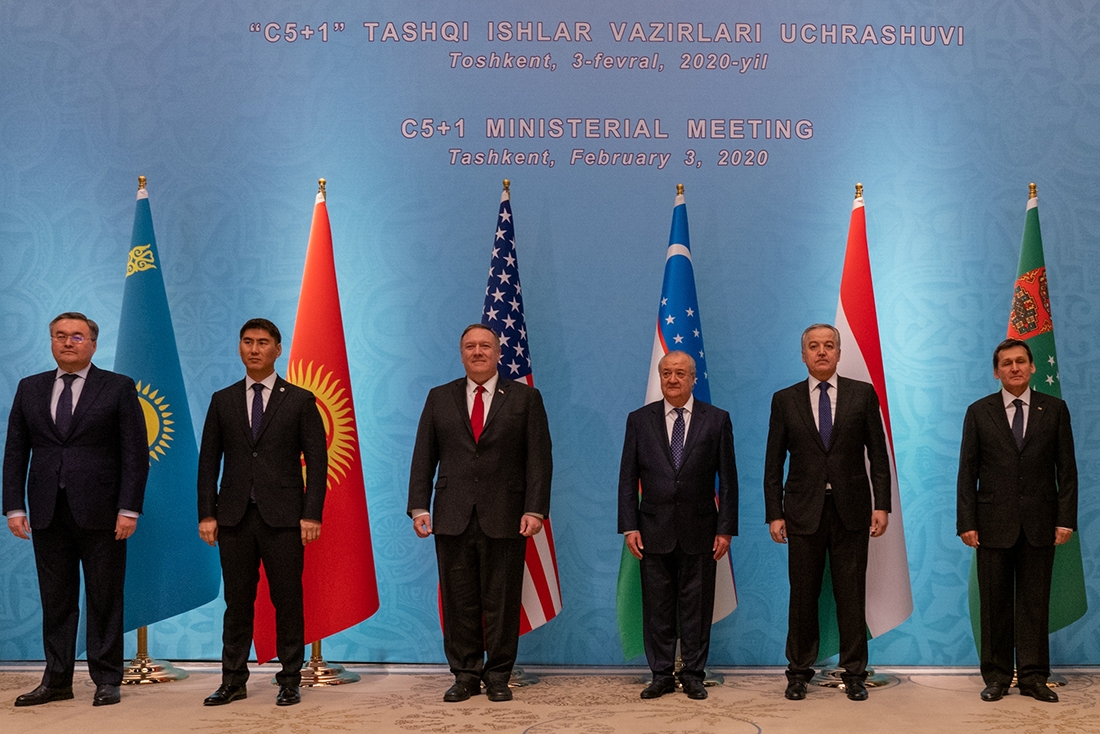 Pompeo and circumstance: The U.S. secretary of state posing with his five counterparts at the C5+1 ministerial summit in Tashkent earlier this week. (@SecPompeo Twitter)

The text of the updated U.S. Strategy for Central Asia, which was unveiled this week, is a coy affair.

It never once mentions China or Russia explicitly, although the shadow of those countries looms ever-present over the document. It does mention Afghanistan quite a bit, although the officials given the task of presenting the strategy at times seemed to wish it didn’t.

Speaking at the strategy's unveiling at the Heritage Foundation on February 5, Lisa Curtis, the senior director for South and Central Asia at the National Security Council, sought to convey the notion that the region is deemed consequential in itself, not because of its neighbors. But her words told a slightly different story.

“We see Central Asia as a geostrategic region of importance in its own right,” Curtis said. “We see the new strategy as reemphasizing an enduring, guiding principle, which is strong U.S. support for the independence, sovereignty and territorial integrity of all of the Central Asian nations, both individually and as a group.”

What, in the minds of Washington policymakers, could be perceived as greater threats to those goals than Beijing and Moscow, whose conduct, for their critics, is predicated on enabling economic and strategic dependence?

The U.S. agenda may be ambitious, but the resources and bandwidth that Washington is willing or able to commit are limited. The emphasis is accordingly placed on what might be termed a software approach: lobbying for reform as an antidote for stagnant investment, promoting intra-regional trade, solidarity and prosperity, and strengthening democratic institutions.

The thinking being that the embrace of all of those things will help the disparate nations of Central Asia emerge united from their state of dead-end strategic subservience.

The action plan, which covers the period from 2019 to 2025, is nothing if not pithy and rests on six points: strengthen the sovereignty and independence of the Central Asian states; fight terrorism; expand and maintain stability in Afghanistan; encourage connectivity between Afghanistan and Central Asia; promote rule of law and human rights; and help the economies of the region become more transparent and attractive to U.S. businesses, thereby boosting development across the board.

If this all sounds familiar, that is because this is the tune that the U.S. has been playing more or less consistently for decades. The strategic posture has been to stand still and wait till the situation evolved. And the environment has indeed changed.

Two important developments stand out. One is the death of Uzbekistan’s long-time dictator Islam Karimov in 2016, and the other was the decision by Kazakhstan’s President Nursultan Nazarbayev to (sort of) step down in 2019. It was no coincidence that Secretary of State Mike Pompeo’s recent whistle-stop mini-tour of the region took in visits to only those countries perceived as offering the potential for something different.

“New governments in the region have indicated a deeper commitment to pursue political and economic reform, including through bilateral cooperation with the United States,” the strategy paper reads.

The region’s other three nations seem to be considered losing bets.

What has also changed since 2015, the year that the last U.S. strategy on Central Asia was adopted, is that Tajikistan has become considerably more authoritarian and hopeless, Turkmenistan has further perpetuated its quirky isolationist ways, and Kyrgyzstan has been all but fully assimilated into Russia’s economic orbit. And these countries have continued racking up massive debts to China all the while.

Indeed, the drafters of the document appear to have taken heed of the advice volunteered, among other places, in a 2016 paper by the Carnegie Endowment for International Peace, which recommended “[prioritizing] U.S. regional engagement with Kazakhstan and Uzbekistan.”

U.S. diplomats sometimes bristle at the suggestion that Washington’s Central Asia agenda is overwhelmingly dominated by security concerns – the implied corollary being that the people at the State Department are the nebbish, simpering bureaucrats to the no-nonsense ramrods over in Defense.

Three out of the six points in the strategy touch upon terrorism and Afghanistan, however.

It is possibly telling though that as Curtis enumerated the headlines of the document, she only mentioned five of them and omitted to dwell on the agenda for “expanding and maintaining stability” in Afghanistan. Conjecturing idly, one might spy an intra-departmental divergence of opinion here, with the military types pushing to retain Afghan security-centric policy as a cornerstone for broader Central Asia strategy, while the civilians demur.

Central Asian governments all worry to varying degrees of intensity about the dangers that elements inside Afghanistan are perceived to pose, but Russia does the bulk of the running on this front through its not-inconsiderable security partnerships with most of, if not all, the five countries. China is also escalating its presence on this front. Diplomats and more considered analysts feeding into the National Security Council may deem it pointless to predicate strategy on offers of assistance that will ultimately prove footling.

It is a point not articulated often enough that rotten governance, of which there is plenty in Central Asia, is arguably no less a threat to national security than the relentlessly cited specters of militant violence and extremism. The new strategy explicitly makes that linkage, although it gets a notably lower billing in the running order.

In fairness, Pompeo did talk about human rights during his recent trip to Central Asia.

The violations he was talking about, however, were the ones unfolding in China’s Xinjiang province, where Muslim minorities are being singled out over their culture and beliefs. The very same sort of selective repression takes place routinely across Central Asia, but Washington rarely feels the need to be as vocal about that as the Trump administration has been about China. This is plain double standards and hypocrisy.

The U.S. says it will advance its rule of law agenda by offering expertise on justice reform and by supporting civil society.

This is all well and good, but if the State Department persists in responding to the egregious excesses of authoritarian Central Asia governments mainly with its customary mealy-mouthed, softly-softly diplomacy, what is the point? The traditional defense on this is that uninformed observers cannot conceive how effective the behind-closed-doors approach can be, but after decades without results this feels unconvincing.