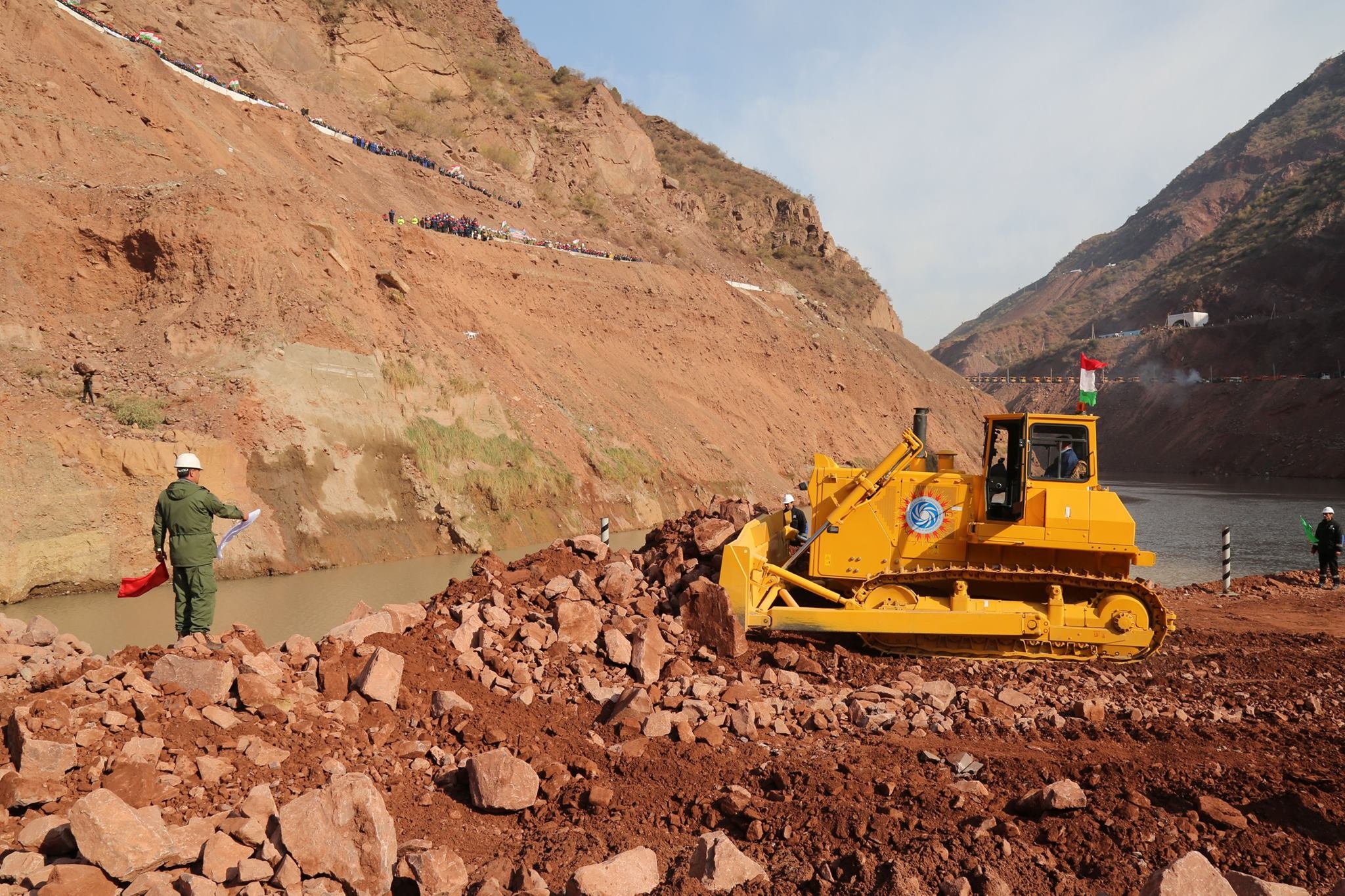 Construction began at the Rogun Dam in southern Tajikistan on October 29, 2016. While the dam remains a top priority for Tajikistan, the Uzbek government only recently has softened its position on the issue. (Photo by Tajikistan Presidential Press Service)

The continuing rapprochement between Uzbekistan and Tajikistan could provide a boost to regional efforts that address one of Central Asia’s key strategic issues: the sustainable management of water resources.

Uzbek President Shavkat Mirziyoyev has placed water management high on his reform agenda. At the United Nations General Assembly in 2017, the Uzbek leader discussed at length the importance of water in Central Asia and the need for cooperation.

“Problems of water, peace and security are inextricably linked,” Mirziyoyev stated at the UN. “There is no alternative to addressing the water problem other than equally taking into account the interests of the countries and nations of the region.”

The Central Asia Climate Change Conference, which opens January 24 in Almaty, will serve as a test of Mirziyoyev’s commitment to cooperation, and can serve as a gauge for the chances of a breakthrough in the development of a water management system. The conference is bringing together government officials, academics and other interested parties from across the region to discuss issues relating to the implementation of the Paris Agreement and the 2030 Agenda for Sustainable Development.

For most of the post-Soviet era, the divergent priorities of upstream Central Asian states, namely Tajikistan and Kyrgyzstan, and their downstream neighbors — Kazakhstan, Uzbekistan and Turkmenistan — have proven unbridgeable. Uzbekistan’s intransigent opposition to water-management reform was widely seen as a major stumbling block.

The 2016 death of Uzbekistan’s long-time leader, Islam Karimov, and his replacement by Mirziyoyev, resulted in Central Asia’s most populous country taking a more cooperative approach on a host of regional issues.

Uzbekistan’s Development Strategy for 2017-2021 underscores Mirziyoyev’s focus on water issues. The strategy proposes comprehensive reforms in the agricultural sector to reduce Uzbekistan’s water usage, primarily via the introduction of greater efficiency. If implemented as envisioned, this would mark a major turn in water management for Uzbekistan. Under Karimov, the Uzbek government tended to dodge the issue of water waste and mismanagement. For years, for example, Uzbek authorities preferred to stress Tajikistan’s and Kyrgyzstan’s roles in the Aral Sea Disaster, which has seen the sea almost disappear over the past 60 years, rather than acknowledge their own water-management shortcomings.

In the search for a regional water solution, no bilateral relationship is more important than that of Uzbekistan and Tajikistan. For nearly two decades, Uzbek-Tajik ties were characterized mainly by acrimony. The mutual hostility of Karimov and his Tajik counterpart, Emomali Rahmon, helped fuel inter-governmental rancor. But Tajikistan’s efforts to construct the Rogun Dam, and thus potentially alter the water-usage status quo, also riled Tashkent.

Although Rogun construction remains a top economic priority for Tajikistan, Mirziyoyev has softened Uzbekistan’s position on the issue. Mirziyoyev’s more relaxed approach, in turn, has allowed for greater input from Tashkent.

More broadly, since Mirziyoyev’s rise to power, the Uzbek government has pursued a thaw in its relations with Tajikistan. Over the past year, the two countries have reached a new visa deal, settled border disputes, resumed flights between the two capitals, and resumed the trade of natural gas. Tashkent has even suggested the construction of the Pskem Hydroelectric Power Plant near Tashkent. This move could symbolize Tashkent’s new embrace of hydro-electric energy. It could also boost Tajik efforts to move forward with Rogun construction.

The normalization of Uzbek-Tajik relations could be a catalyst for regional efforts to promote water security. There are several existing framework pacts that can facilitate the joint search for solutions, including the 1992 Agreement on Cooperation in the Joint Management, Use and Protection of Water Resources of Inter-State Sources, and the 2006 Framework Convention for the Protection of the Environment [and] for Sustainable Development in Central Asia. While the mechanisms may exist, political will up until now has been lacking.

But that is changing.

"We must eliminate the causes that fuel the potential for conflict. We are looking for reasonable compromises in resolving issues on border, water use, transport and trade,” Mirziyoyev said at UN-sponsored conference in November on sustainable development.

William Persing is a M.A. candidate at Columbia University's Harriman Institute. His research focuses on legacies of Soviet centralized planning and their effect on energy disputes in the former Soviet Union.