Perspectives | Why I map the Karabakh war

These tools can cut through the fog of the information war to depict where, when and how the conflict in Nagorno-Karabakh is unfolding. 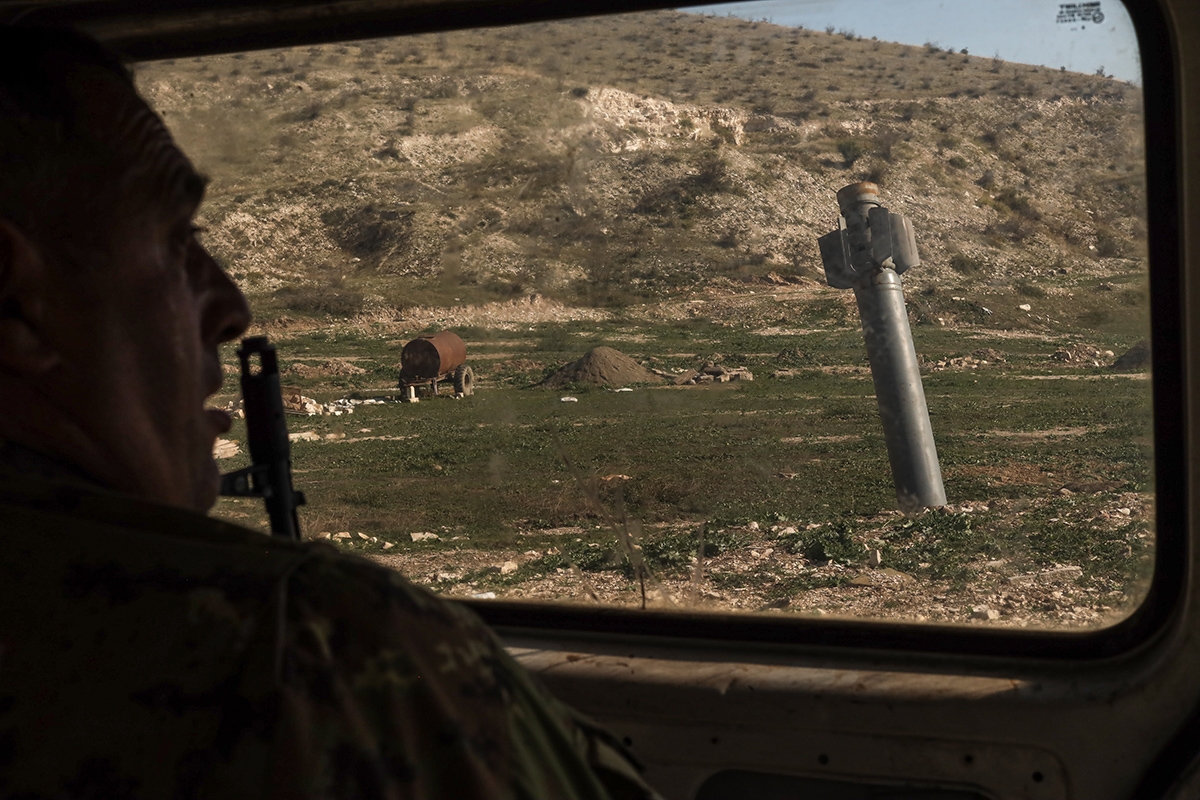 An Armenian militiaman during shelling in Martuni (photo: Jonathan Alpeyrie)

Today when governments lie or exaggerate, especially about something as sensitive as movements on the battlefield, journalists have a new tool to confirm controversial claims and refute disinformation.

From tracking the Russian missile that downed a Malaysian airliner over eastern Ukraine in 2014 to identifying the time and place of a grisly 2018 murder by soldiers in Cameroon, geolocation – the ability to cross reference video footage with existing imagery, often manually – has revolutionized journalism.

These digital forensic tools have become essential for analyzing the war between Armenia and Azerbaijan, where people on both sides tend to believe – or at least share without evaluation – their own government’s sometimes wild claims.

I am not a Caucasus expert. When the current war over Nagorno-Karabakh began on September 27 and Azerbaijan’s Defense Ministry began sharing dozens, then hundreds, of videos shot by its armed drones, I had little understanding of the conflict, the actors, the capabilities or the implications. But I knew my experience – having honed skills at geolocating footage for the past several years as a hobby and analytical tool – could be useful to people trying to cut through the propaganda from both sides.

Geolocating footage typically begins with identifying specific landmarks, such as hills in the background or several buildings in relation to one another, and manually searching satellite imagery for locations that match these features. It is time-consuming work.

On the first day of the war, I began by looking at Azerbaijani drone videos of strikes near Martakert and Mataghis. Using the coordinates of both sides’ trenches, which were clearly visible in Google Earth, I was able to confirm that Azerbaijani forces has crossed the first lines of defense. (Google Earth’s historical satellite imagery enables one to track changes over time.)

As the scale of the fighting became clearer, I plotted the length of the front line, tracing both Armenian and Azerbaijani trenches and posting the files online so others could download and use them. While tedious, the lack of tree cover ensured that tracing the approximately 315 kilometers of trenches was relatively straightforward; they were clearly visible in Google Earth imagery.

After geolocating a few incidents, I figured out a basic system for illustrating territorial control. Dropping pins where footage confirmed an Azerbaijani presence showed how far they had advanced. Here I relied both on my own efforts as well as the excellent work of more than a dozen other skilled individuals, some anonymous, who are publishing their research online. Such collaborations are critical. Each of our contributions must be replicable and clear, allowing this loose collective to build a far larger and more sophisticated database of confirmed incidents than is possible for one to do alone.

After verifying drone footage, we can estimate territories the Azerbaijanis have seized, how air strikes have hit both Armenian rear and frontline positions, and which airbases Azerbaijani drones use. Baku has also claimed territories without providing evidence; President Ilham Aliyev regularly tweets lists of “liberated towns” that cannot be confirmed.

Similarly, but less frequently, footage posted by Armenian forces can be used to demonstrate the limits of the Azerbaijani advance. But since Azerbaijan is clearly winning the war on the ground, it has not been in Armenia’s interest to release footage that could be used to establish territorial losses. Armenian media outlets have also consistently blurred parts of frontline footage that could be used to geolocate positions, albeit with limited success.

Soldiers on both sides are also posting videos and photos, allowing us to map events and positions outside what governments might want us to see, including Syrian mercenaries fighting for Azerbaijan, which roundly denies their presence. Footage posted on social media has also provided evidence of war crimes, including missile strikes on civilian-populated areas on both sides and videos, confirmed by investigators at Bellingcat and the BBC’s Russian Service, that show Azerbaijani soldiers executing two Armenian men. Using infrared satellite data from Sentinel Hub, a free satellite imaging service, we also have an accurate, up-to-date view of where fires have broken out in Nagorno-Karabakh’s forests, giving us another window into where drone, artillery and incendiary strikes have occurred. (Both sides accuse the other of using controversial white phosphorus bombs, which can start large fires.)

Of course, relying on government propaganda videos and social media poses problems. Footage can be days or even weeks old before it is released. We only see what they share – which could have been quickly disseminated or long delayed, depending on the state’s intentions. So our maps show not the day-by-day progress of the Azerbaijani military, nor an image of the front lines at any moment, but rather the day-by-day confirmation of which positions they hold.

But with both sides engaged in high-intensity propaganda efforts, there is value in confirming territorial holdings. Azerbaijan often claims it has seized territory without evidence, releasing footage days or weeks later and sometimes never at all. At the same time, Armenia routinely asserts that the Azerbaijanis are lying about their advances, sometimes claiming it still holds territory that we have confirmed was taken weeks earlier.

Official announcements are poor indicators of the situation on the ground. Our maps cut through the information war and prove that the territory Azerbaijan has taken is much larger than the land Armenia has admitted to losing.

Ryan O’Farrell is an independent researcher and recent graduate of the School of Advanced International Studies at Johns Hopkins University.