Perspectives | Will new Azerbaijani Islamist movement share the fate of its predecessors?

Political movements based on Shia Islam have faced an uphill battle, as both the government and mainstream opposition are devoted to a secular, pro-Turkic national narrative. 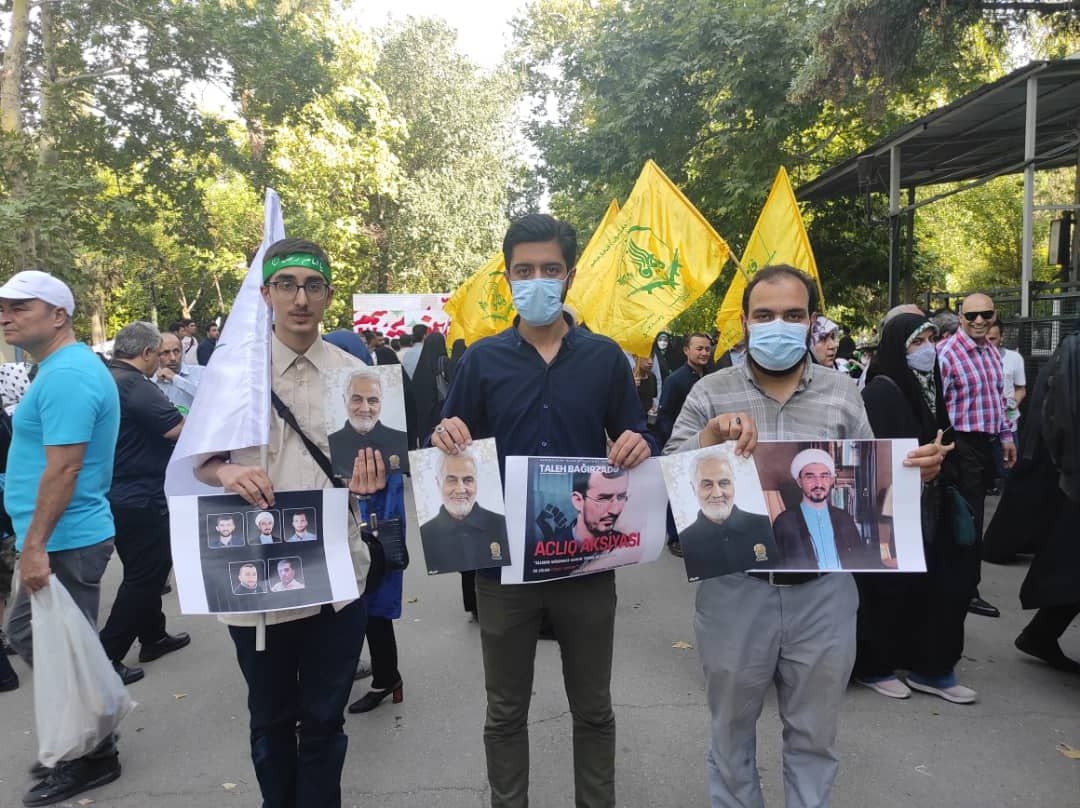 The recent wave of repressions against Shia activists in Azerbaijan, and the prison hunger strike of one of the most prominent Shia leaders in the country, have focused attention on a new political-religious movement: the concept of the Karimah state.

Karimah (“generous” in Arabic) state is proposed by Huseyniyyun, a group of ultra-conservative Azerbaijanis, mostly living in Iran and having studied at the Qom seminary. They advocate for a theocratic state based on “belief and morality, justice, science and rationality, brotherhood and community.” 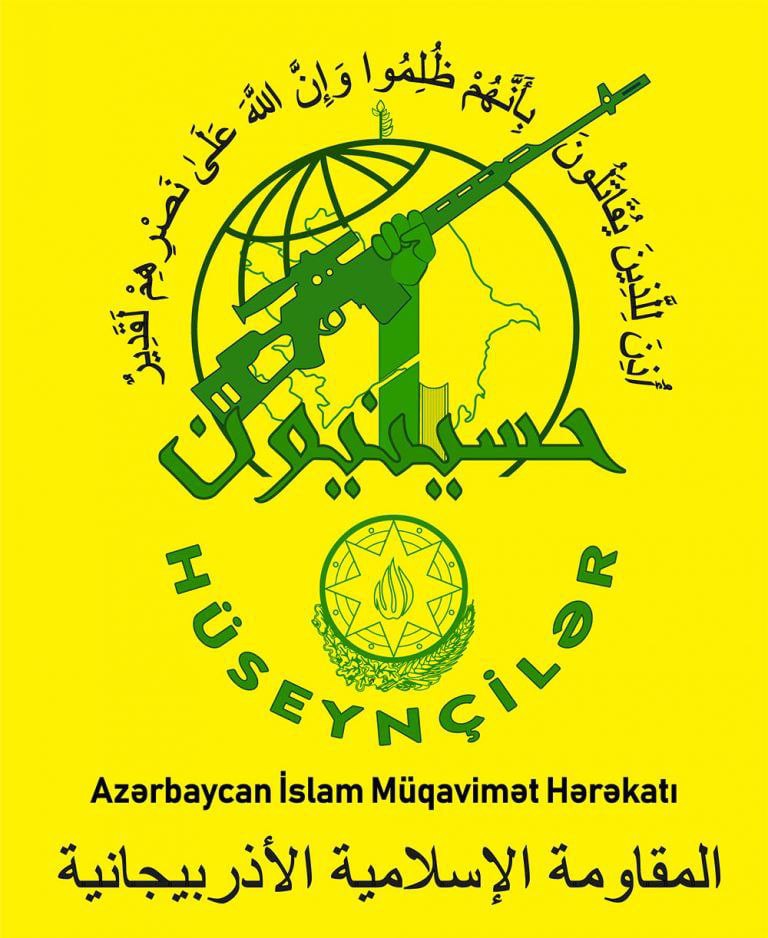 Huseyniyyun sympathizes with the most famous militant Shia movement, Hezbollah, and their banner (right) resembles that of Hezbollah, with the addition of Azerbaijan’s map and coat of arms. Many members fought in the last decade’s wars in Syria and Iraq as pro-Assad volunteers against the Islamic State and Sunni opposition forces.

The group has become especially visible and has been the topic of a broad social media discussion since early June when Tale Bagirzade, Azerbaijan’s most prominent Shia leader, started a hunger strike in prison.

Seizing the opportunity to gain visibility, Huseyniyyun has stepped up its publicity, posting several social media videos on the issue. The women’s wing of the organization even organized a protest in support of Bagirzade in the Baku metro.

The group and its activities have become hot topics among Azerbaijanis, from satirical sites mocking its leaders’ appearance to pro-governmental analytical articles fretting about its potential significance. The common thread in these discussions is that the movement is the brainchild of Iranian secret services aimed at undermining secularism in Azerbaijan. Pro-government MP Razi Nurullayev has accused the group’s sympathizers of “treason.”

Despite the noise around the Huseyniyyun and the Karimah concept, their support in Azerbaijan is likely not broad. The group may have some supporters in southern Azerbaijan, with its history of support for political Shiism. But videos they post get a maximum of 8,000 views, and the number of subscribers to their Telegram channels is far smaller.

As the history of Shia political activism in Azerbaijan shows, the type of political vision the Huseyniyyun espouse has a limited appeal.

The mid-1990s was the peak of political diversity in Azerbaijan. Among the many political parties that emerged in the early post-independence period was the Islamic Party of Azerbaijan (IPA), which explicitly rejected democracy in favor of Islamic law and was based in Nardaran, the deeply devout town on the outskirts of Baku.

It was the only party that propagated closer ties with Iran, a position that put it strongly at odds with most Azerbaijanis.

Azerbaijan’s second president, Abulfaz Elchibey, like many leading figures of the independence movement in Azerbaijan, held strong anti-Iran sentiments. In his pan-Turkic agenda, the ultimate goal of the nation was to “liberate” Iranian Azerbaijan, the northern part of Iran with its largely ethnic Azerbaijani population.

And even when Elchibey was succeeded by the more pragmatic Heydar Aliyev, this vision of Iran as a Persian imperial state that violates the rights of ethnic Azerbaijanis and supports enemy Armenia remained dominant in Azerbaijan. It is still held by the government, the mainstream nationalist opposition, and by most of the general public.

In 1996, the Islamic Party was accused of spying for Iran. Its leader, Haji Alikram, was imprisoned and the party’s registration was revoked.

In the following years, the party still operated, though it was no longer registered. Its activism focused mostly around the demolitions of mosques.

In September 2010, the authorities banned wearing hijab in schools, citing newly adopted school uniform standards. That catalyzed a new wave of Islamic political activism, with “Free the Hijab” demonstrations taking place in 2010, 2011, and 2012. The last ended with serious clashes between the protesters and police; some participants received years-long prison sentences.

The Islamic Party did not organize the protests, but its leaders and members openly participated. The party’s new head, Movsum Samadov, was arrested in the aftermath of the first protest. He responded with a speech in which he compared Ilham Aliyev, by now the president, to the second caliph and the main antagonist of Shia Muslims, and accused the government of “working for Zionists.” Charged with terrorism and attempting to seize power, Samadov was sentenced to 12 years in prison. Many Shiite activists were arrested and imprisoned on similar charges.

The school hijab ban, as well as the demonstrations and repressions against Shia activists, resulted in vigorous debates in the liberal and nationalist parts of civil society about the right to wear hijab at schools and the possibility of cooperation with Islamists against the government.

This period also saw the rise of new social movements in Azerbaijan that more directly challenged conservative social norms and even mocked Islam itself. Many of these newly emerged intellectuals and young activists blamed Azerbaijan’s problems not only on the political authorities but on society’s unwritten laws and mores. In 2010 the newspaper Alma, run by the Dalga Youth Movement, published cartoons mocking the prophet Muhammad. Clerics, including those associated with the IPA, demanded the newspaper be shut down. It quickly closed.

Another touchstone case was that of Rafig Tagi, whose critical writings on Islam and Iran in the newspaper Sanat triggered protests in Nardaran organized by the Islamic Party. Convicted of “promoting religious hatred,” he spent eight months in prison; in 2011 he was assassinated.

The Alma and Rafig Tagi episodes deepened the divide between the Islamic and secular opposition, and set the stage for the bloodiest chapter in the history of political Shiism in Azerbaijan.

From blood in Nardaran to the Karimah state

In early 2015 Bagirzade, a young and charismatic Shiite intellectual and former member of the IPA who spent one-and-a-half years in prison for participating in the hijab protests, founded the Muslim Unity Movement (MUM). Compared to the IPA, MUM is less radical in its demands (it does not call for Sharia law, for example, instead arguing for democracy and greater rights for believers) and more open to cooperation with the mainstream opposition and civil society.

But the group, too, has faced harsh treatment by the authorities. In November 2015, a police crackdown against the MUM in Nardaran resulted in clashes that killed five locals and two police officers. Dozens were arrested and Bagirzade was sentenced to 20 years in prison for “publicly calling for the overthrow of the government and inciting hatred.”

Murkier events took place in July 2018, when a young Shia Islamist, Yunis Safarov, attempted to assassinate the unpopular head of the local government in the city of Ganja, Elmar Veliyev. Two police officers were killed during ensuing riots in the city. Despite being an Islamist, Safarov has become a sort of folk hero among depoliticized, nonreligious Azerbaijanis for standing up to the corrupt government. He is now serving a life sentence in prison.

Azerbaijan’s continuing authoritarian consolidation has shattered both the religious and secular opposition. And the victory in the 2020 war over Armenia has vastly strengthened the legitimacy of the government.

The Sunni leadership of Turkey, which played a key role in securing Azerbaijan’s victory, has become lionized. A national narrative based on the Turkic roots of the nation has become stronger following the war, eclipsing any would-be Shia counternarratives. And Iran’s star has only continued to fall, as it remained relatively neutral during the war and only later diplomatically supported Azerbaijan.

But the mainstream opposition, too, is in an ideological crisis and has little support. With its active social media efforts, Huseyniyyun can potentially gain supporters among an underclass that could be attracted to the just vision of a Karimah state and turned off by pro-government clerics. It may not garner broad support, but its ability to mobilize passionate segments of the population could augur a polarization of a society that was once firmly united around the victory in the war.