Both sides are eying problems with the project amid talks over a high-stakes railroad. 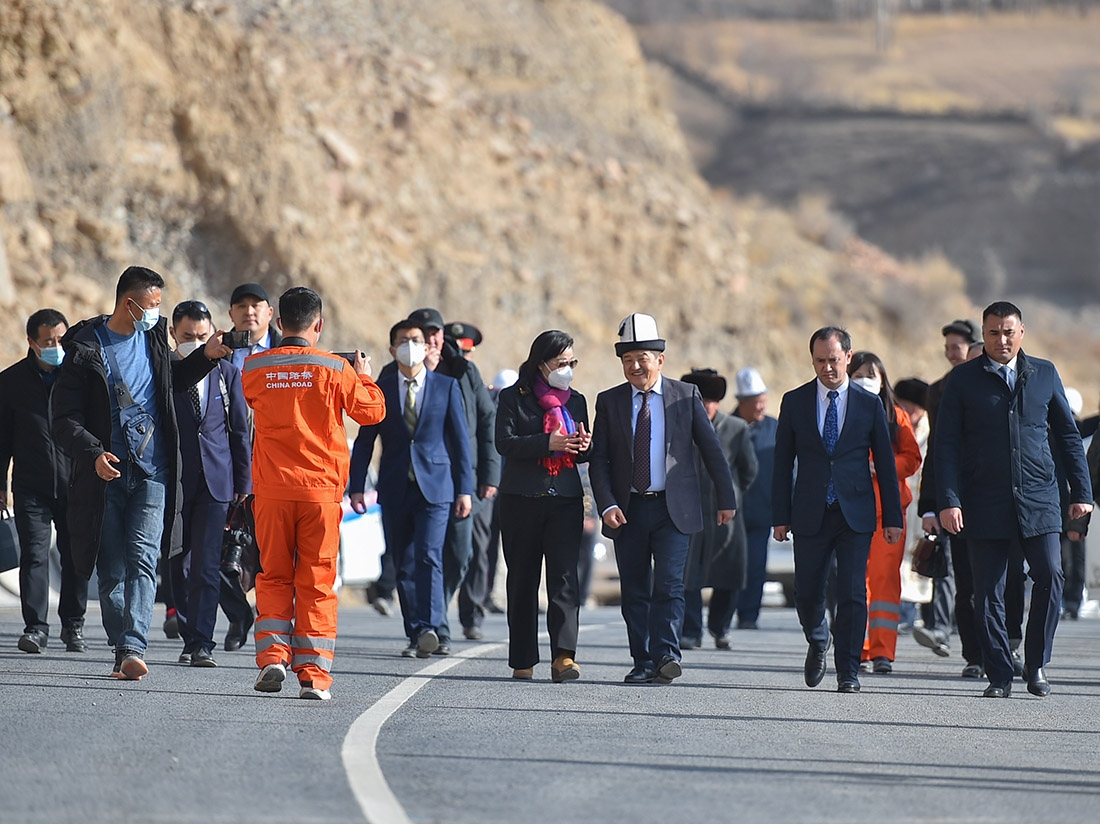 The head of Kyrgyzstan’s government, Akylbek Japarov, walks with Chinese Ambassador Du Dewen on a section of the new road that opened in November. (government handout)

The Chinese contractor tasked with connecting Kyrgyzstan’s north and south says it is being slowed down by highway robbery: Parts of the road it is building keep disappearing.

Petty thefts of equipment and construction materials are just the latest hiccup for a $1 billion project that was expected to take five years when the deal was signed in 2013. Completion is now scheduled for the end of 2023.

The so-called “alternative north-south road” will run parallel to a longer, higher-altitude Soviet-era road that is the only land route connecting Kyrgyzstan’s two disparate economic centers at present.

It is arguably the most important Chinese infrastructure project in Kyrgyzstan to date.

Yet frustrations among both investors and the government beg questions about whether it will be the last Chinese project of such scale in the volatile Central Asian country – and if it might be the death knell for a long-mooted railroad.

Kyrgyzstan’s transport ministry said on February 10 that the China Road and Bridge Corporation had filed a complaint with police and was seeking damages of over $3,000 after fencing was stolen from one of the bridges positioned along the road.

Such incidents are too common and “negatively affect the image of the country in the eyes of foreign personnel involved in the implementation of road projects,” the ministry said.

The highway, a three-part affair, is now on the home stretch.

Last November, the head of Kyrgyzstan’s government and China’s ambassador attended a ceremony marking completion of the second phase of the project, which includes two impressive-looking bridges totaling 1.4 kilometers in length over the river Naryn.

The Exim Bank of China and the Asian Development Bank are financing more than $850 million toward the total; the government is expected to contribute $34 million.

Kyrgyz authorities have a love-hate relationship with Exim Bank.

While it is the only bank in the world prepared to provide long-term, low-interest loans of such size to the country, it does so on straitjacket terms.

In the case of the north-south road some officials have complained the government secured a bad deal.

Zarylbek Satayev, a representative of the Accounts Chamber, the official state auditor, said last summer that an investigation by his office had found multiple violations since construction began in 2015.

Kyrgyzstan had overpaid for one section to the tune of $35 million due to a rushed topographical analysis, he said. The state prosecutor was considering some of the alleged violations, Satayev claimed.

Not that Kyrgyzstan could take any action against China Road and Bridge Corporation even if it wanted to.

“The government representatives [of the time] knew all this but signed [anyway],” Kalmambetov complained.

The modernization of a thermal heating and power plant in Bishkek is the most famous example. After the plant failed during one of the coldest winters on record, in 2018, two former prime ministers were handed jail sentences for corruption.

One of them, Sapar Isakov, argued passionately that the terms of the loan gave the government no control over spending and that Exim Bank had preferred a more expensive contractor.

The fallout from the power plant scandal will be on the minds of Kyrgyz officials as they claim they’re moving closer to an agreement for the China-Kyrgyzstan-Uzbekistan railway.

The multi-billion-dollar project was first conceived in the 1990s but has been repeatedly stymied by disagreements over routes, track gauges and cost-sharing. China Road and Bridge Corporation has in the past presented itself as the contractor-in-waiting for the project. Exim Bank would inevitably play a role in financing the link.

The railroad was one of several items discussed during talks between Chinese President Xi Jinping and his Kyrgyz counterpart, Sadyr Japarov, at the Winter Olympics in Beijing last week.

The deputy director of Kyrgyzstan’s state rail company Kyrgyz Temir Zholu, Dastan Usubakunov, said in January that the company had sent project documents to the Chinese for review and predicted that a key agreement on the railroad could be reached as soon as this month.