Most civilians have fled. But some have stayed to support men at the front, others to fight for their homes. 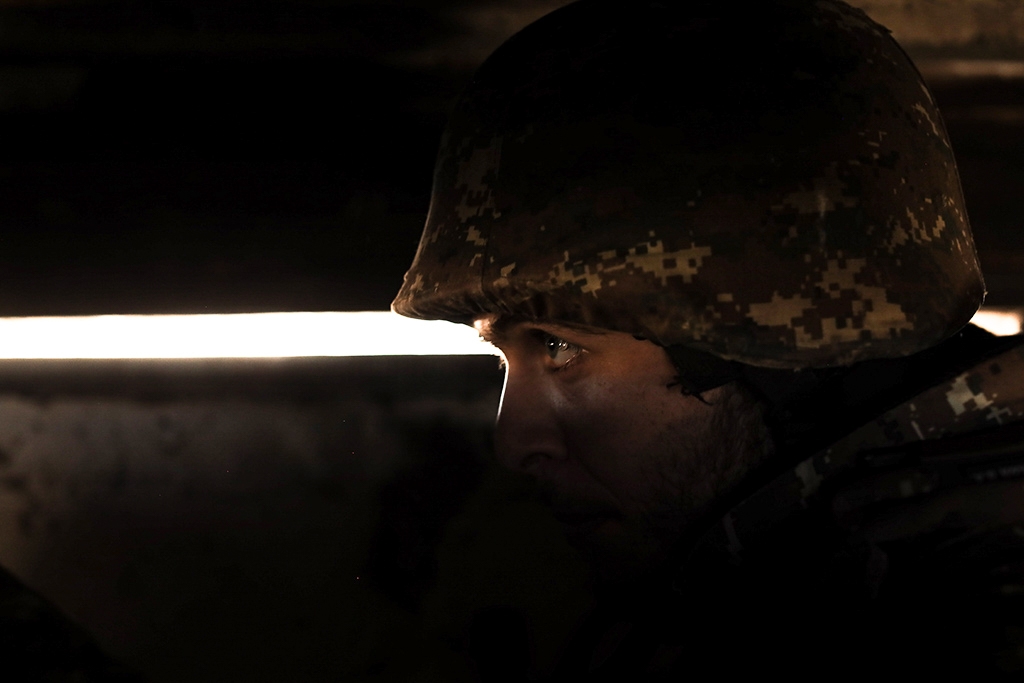 On the Martakert front. (all photos by Jonathan Alpeyrie)

With Azerbaijani forces closing in, over half the population of Nagorno-Karabakh has fled their homes. But in the basements of Stepanakert and other towns, a few remain. They are mostly older men and women.

Some have stayed to support men at the front, others to fight for their homes.

“My son is at the front lines. Sometimes he comes to see me for two or three days, then he returns to the front,” explains Lyudmila Yedigaryan, 59, in her cellar in Shusha. “We are very scared. They [the Azerbaijanis] are shelling all the time. Sometimes I run to my apartment to get some food, but because I live on the fifth floor, it is even scarier as it takes time for me to go up the stairs."

Hundreds, if not thousands, of people like Yedigaryan have turned gloomy cellars beneath Soviet-era concrete apartment blocks into makeshift homes, adding heating, kitchens, bedrooms and anything necessary to weather a long siege.

Yedigaryan says she will stay as long as her son is at the front. She hopes Russia will intervene to put a stop to the fighting, which has also killed a dozens of civilians far from the front lines on the Azerbaijani side. 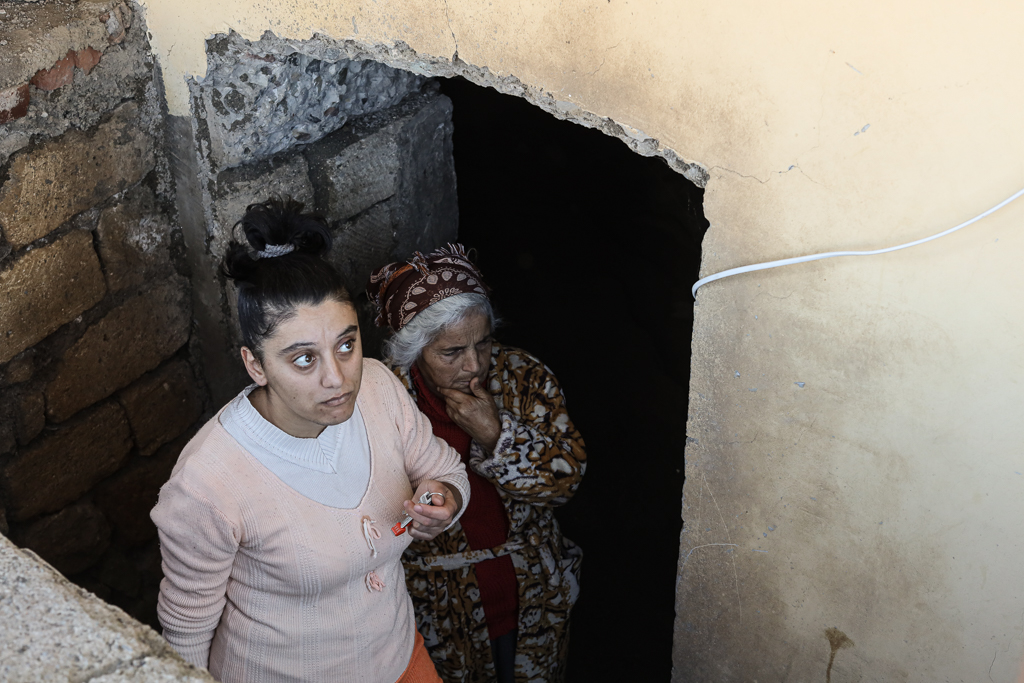 Alyona Shahramanyan (left). Her father, uncle and husband are all on the front lines. "I speak with them as often as possible.”

"We are all afraid to return home even to cook or take a shower,” she says, adding that she also hopes Russia will stop the war. "What is the point to continue such a war when so many are dying?”

“I saved my neighbors’ kid from the shelling by rushing him into the cellar. The priest and my neighbor blessed me so one day I can have children on my own." 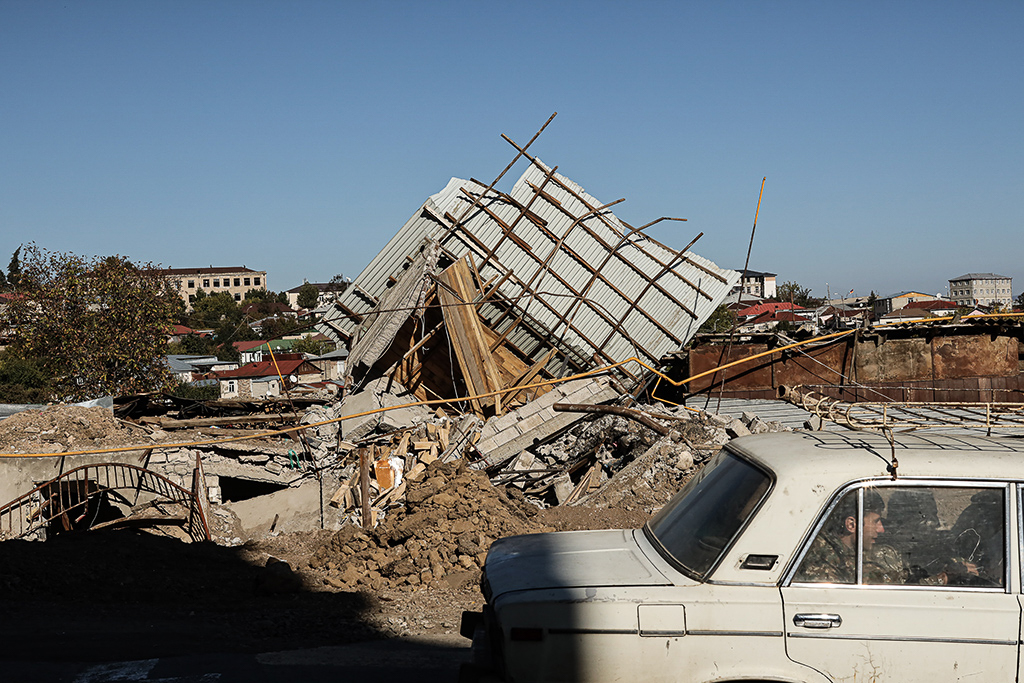 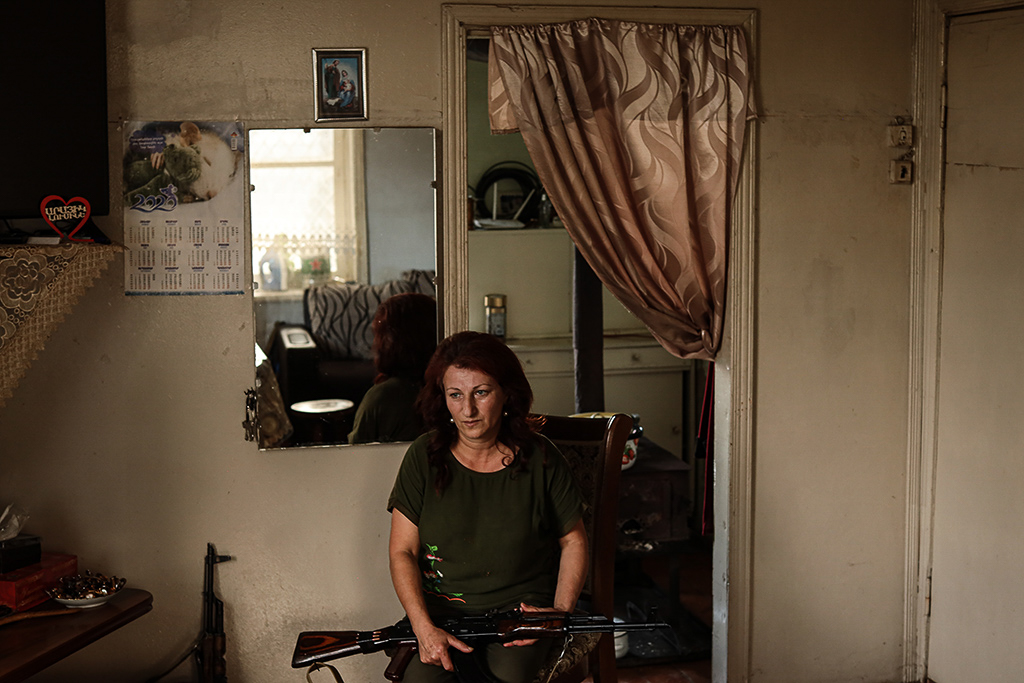 Lusine Saroyan is from the village of Harutyunagomer near the Martuni front. Heavily armed, she and her family have stayed behind to defend their home from Azerbaijani troops. Her son is at the front. 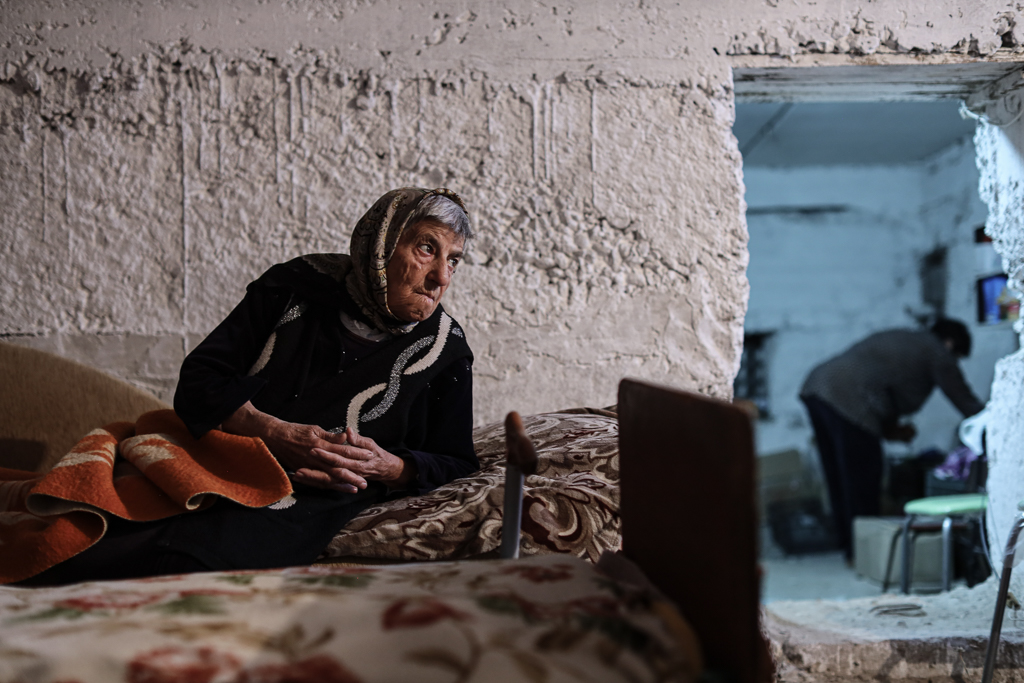 An 89-year-old woman shelters in a basement in central Stepanakert as Azerbaijani forces shell the town. 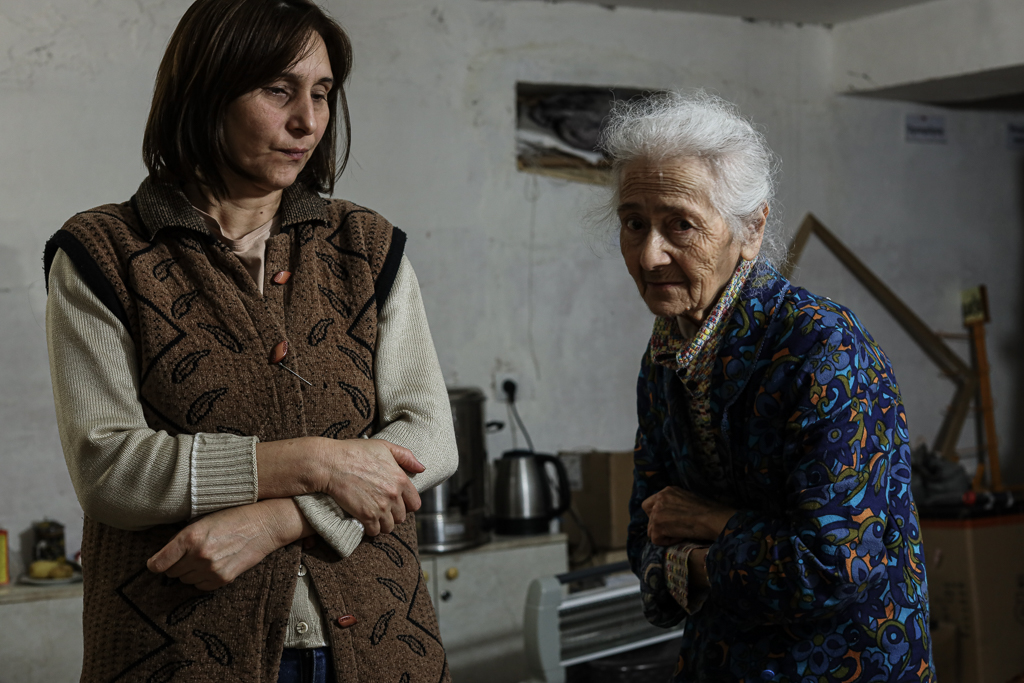 Stepanakert. These two women have sheltered in their cellar since the beginning of the war. 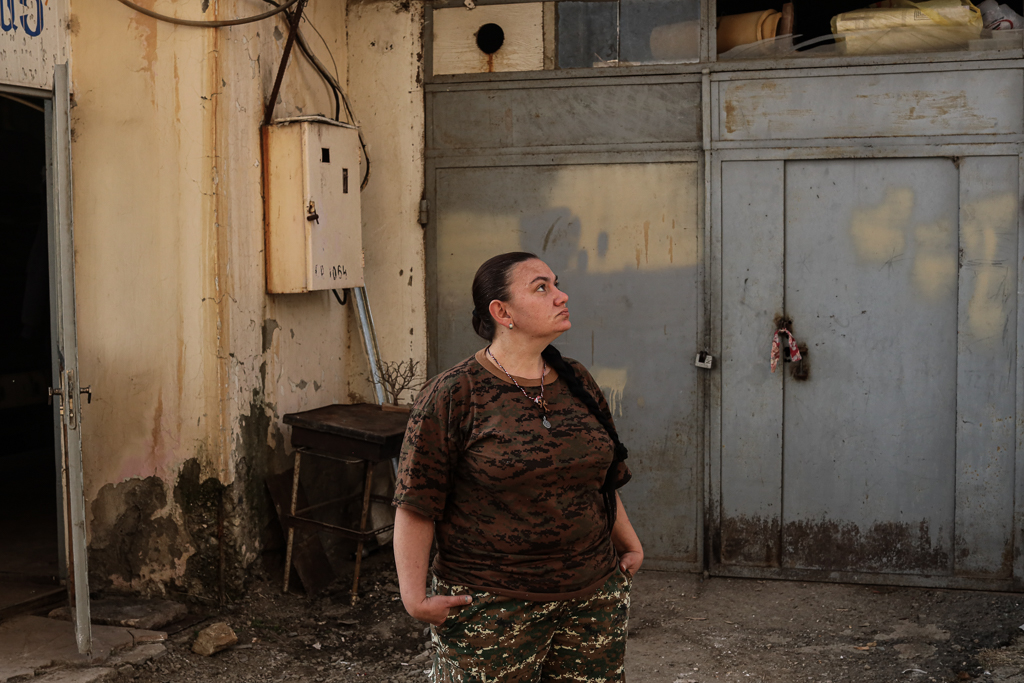 Stepanakert during a lull in the fighting.

“The boys need me.” This woman, who declined to give her name, volunteers at the Martuni front. She has two kids at home in Yerevan and lies to them so they won’t worry. "I try to help as much as possible on the front lines, cooking, nursing the injured boys. Since I have a military education, I am able to help at the front." 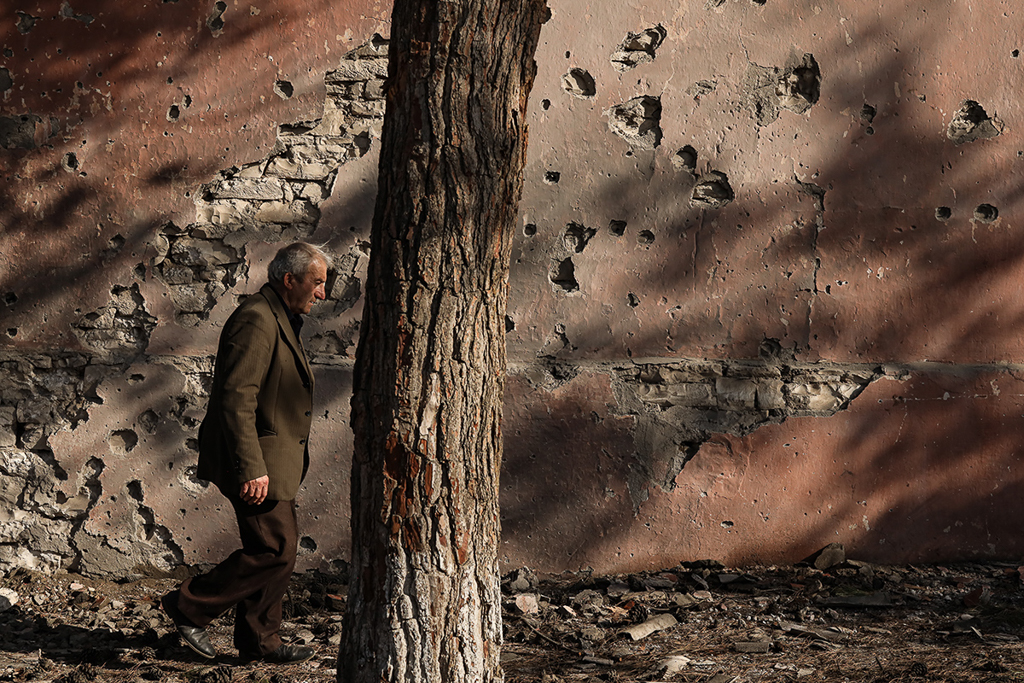 Martuni, after shelling. A man walks by his home. 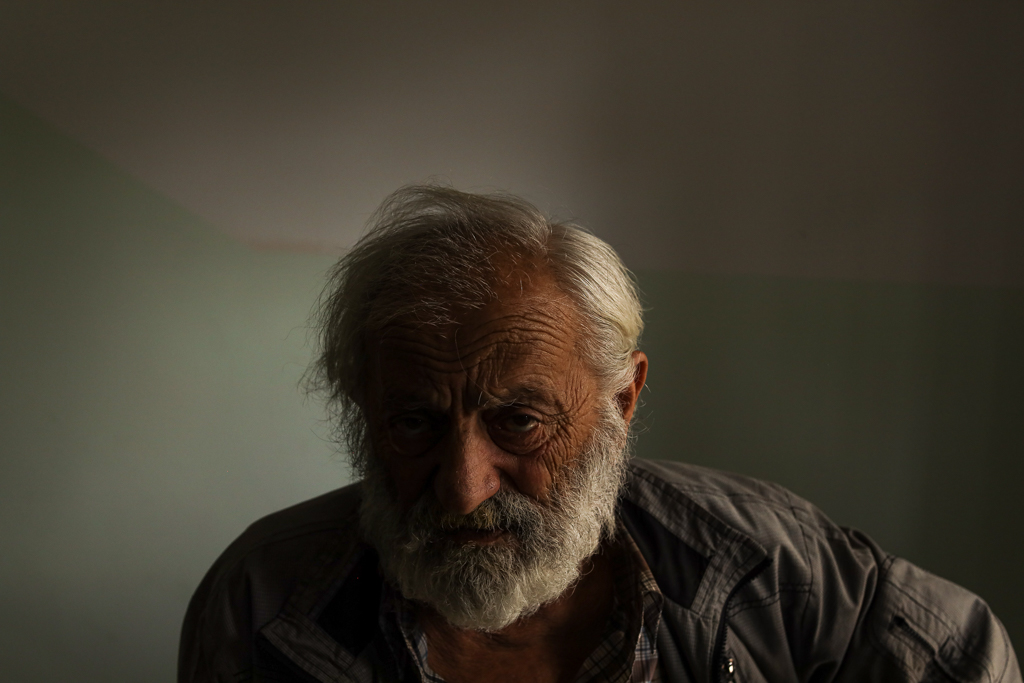 This man in Martuni refuses to leave his home, even though it has come under constant bombardment. 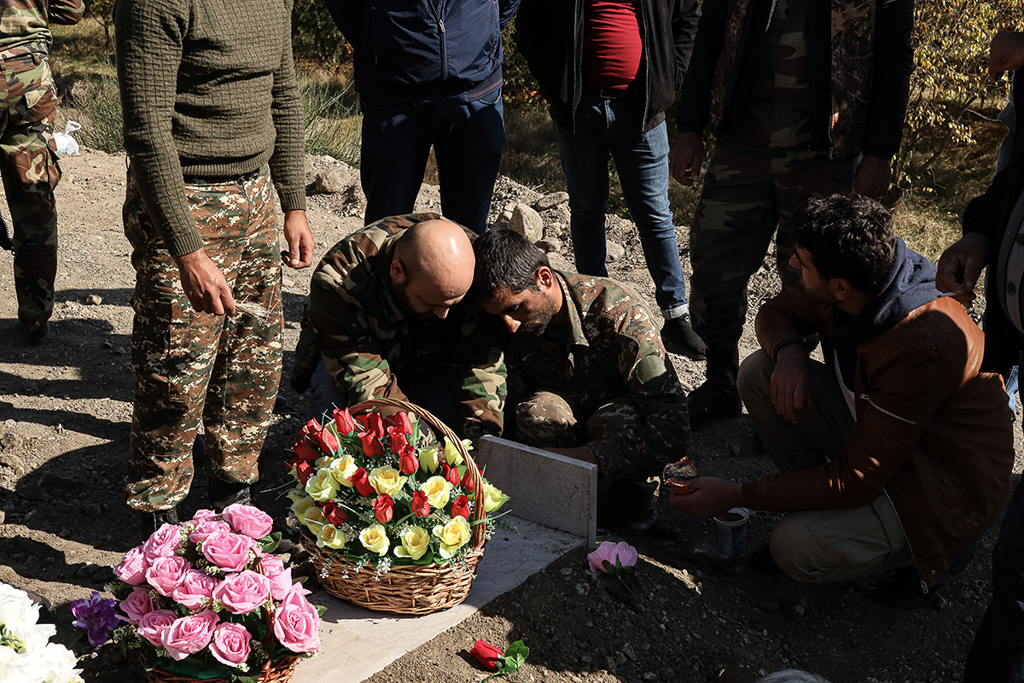 The main Stepanakert cemetery. A man buries his younger brother, who was killed in fighting the previous day. 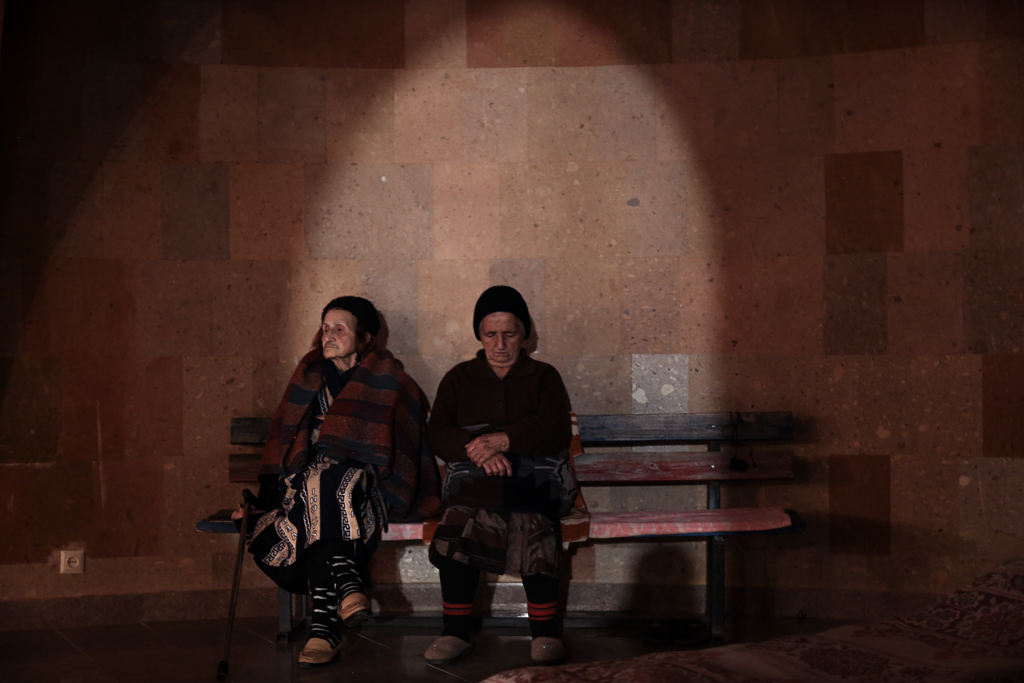 Stepanakert. About 30 people have been living in the basement of the Holy Mother of God cathedral since the shelling began. 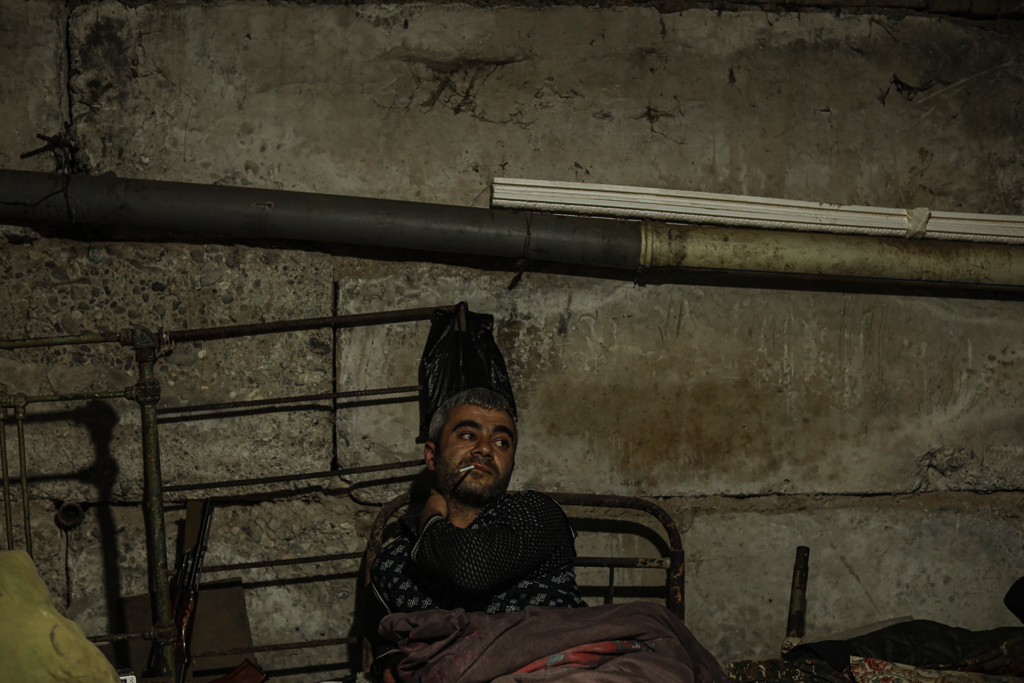 Shusha. Four men have taken shelter underneath their apartment as Azerbaijani forces shell the town daily. 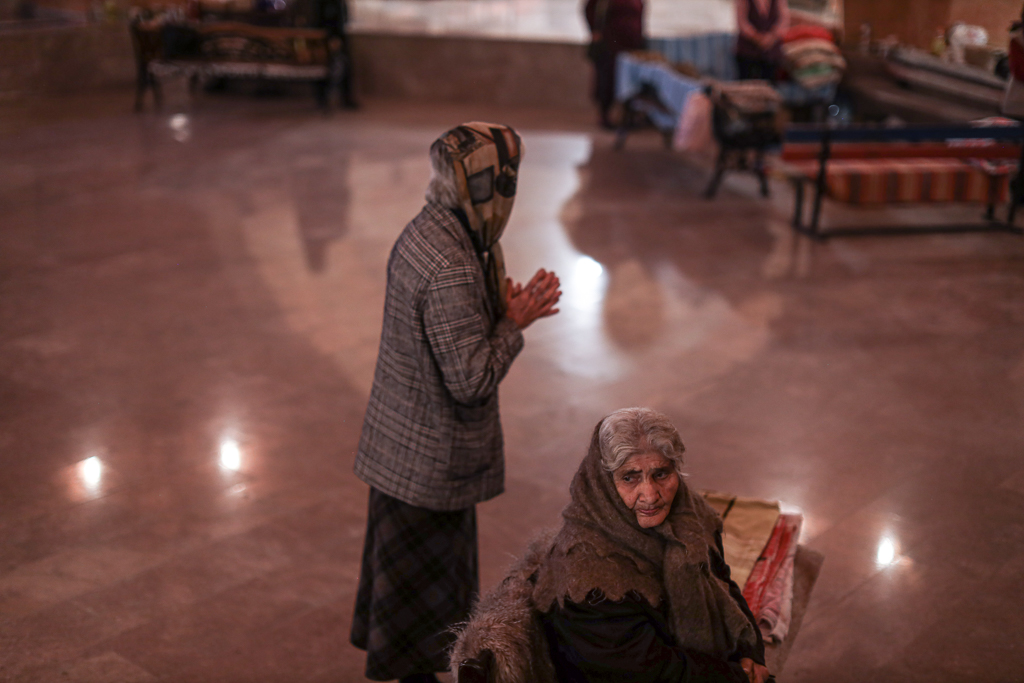 Nora, from Hadrut, in the basement of Stepanakert’s Holy Mother of God cathedral. Her entire family lives and works in Russia, so she has been alone since the war started. "It was very hard to leave my home even though there was heavy fighting, but eventually I had to. I left everything behind. I had nothing when I came to the church here in Stepanakert."

Jonathan Alpeyrie is a conflict photographer from New York.