The holiday is among the most important in the Islamic calendar. Many Muscovites look askance at the celebrations 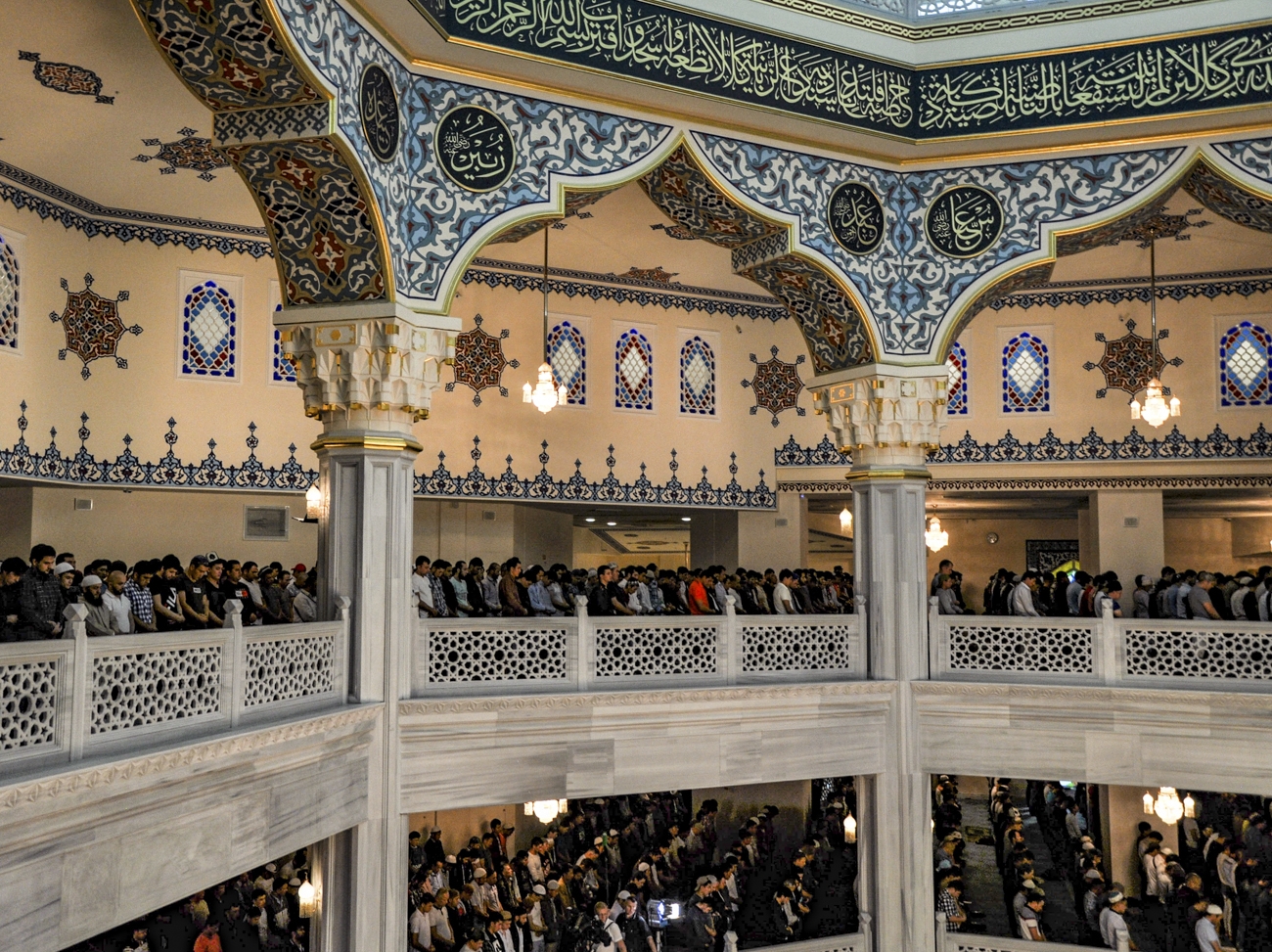 When Namaz, or Islamic prayers, begins, worshipers in no polite terms ask me to leave (the Namaz performed in front of a non-believer isn’t acceptable), so I change locations. (All photos by Nicholas Muller) 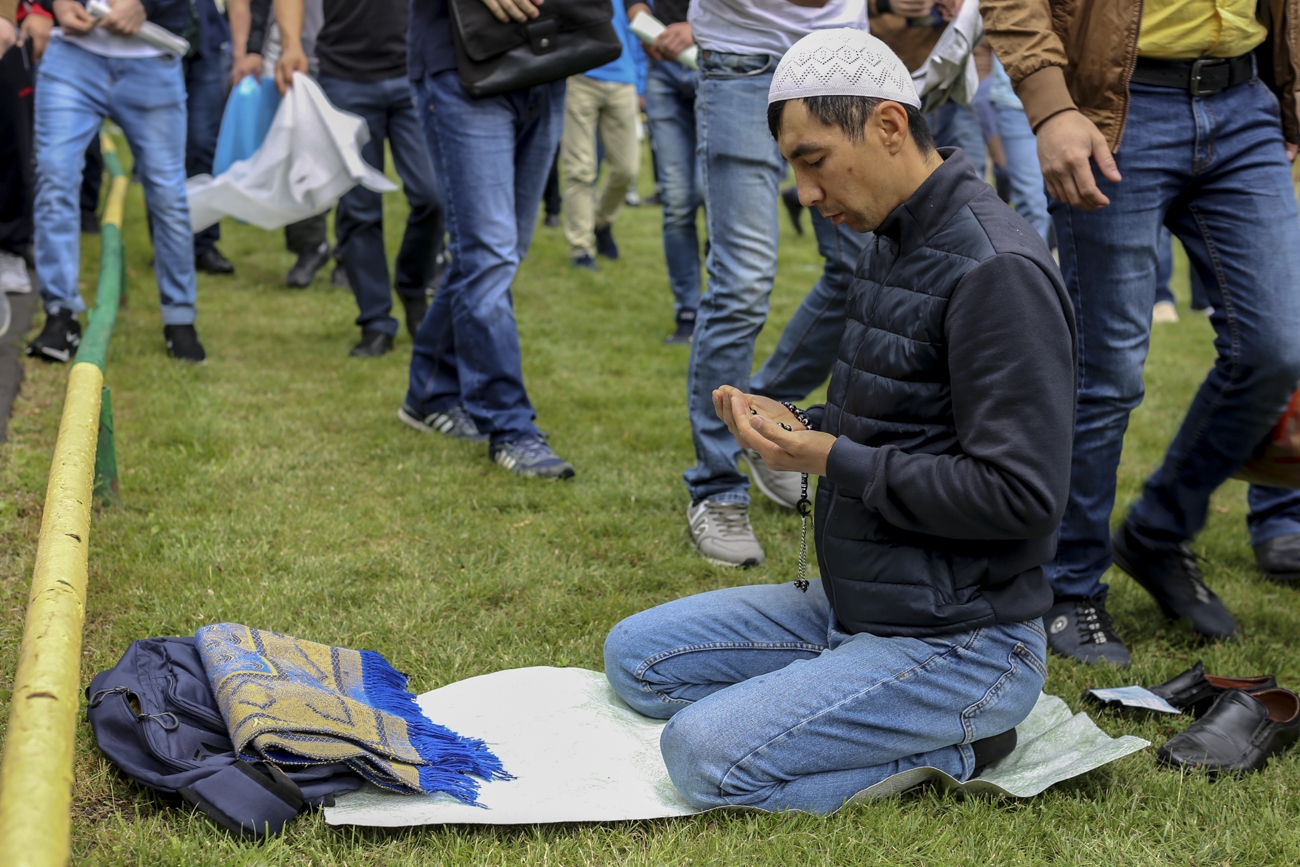 A man prays outside the mosque in Moscow's Prospect Mira neighborhood before Namaz begins. 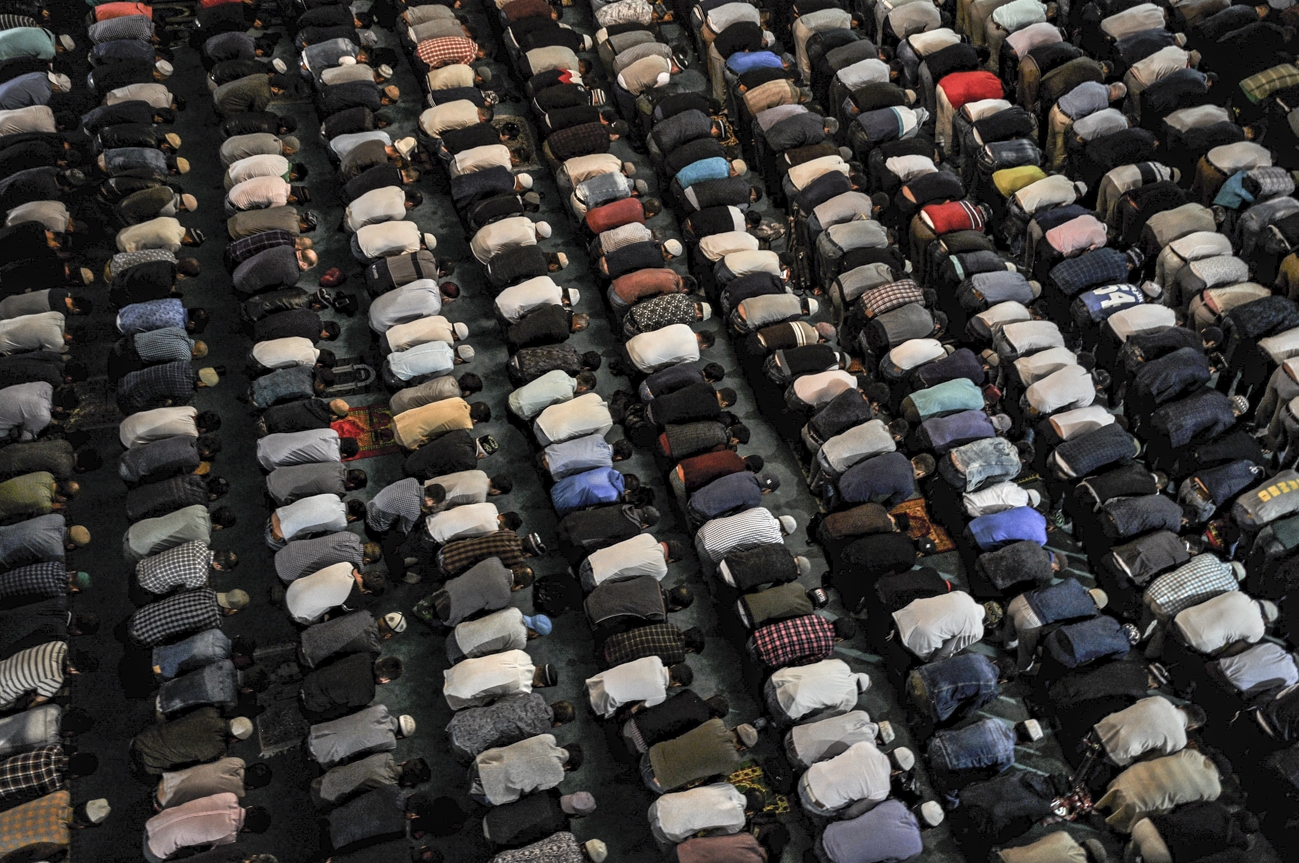 Worshipers praying in the mosque. 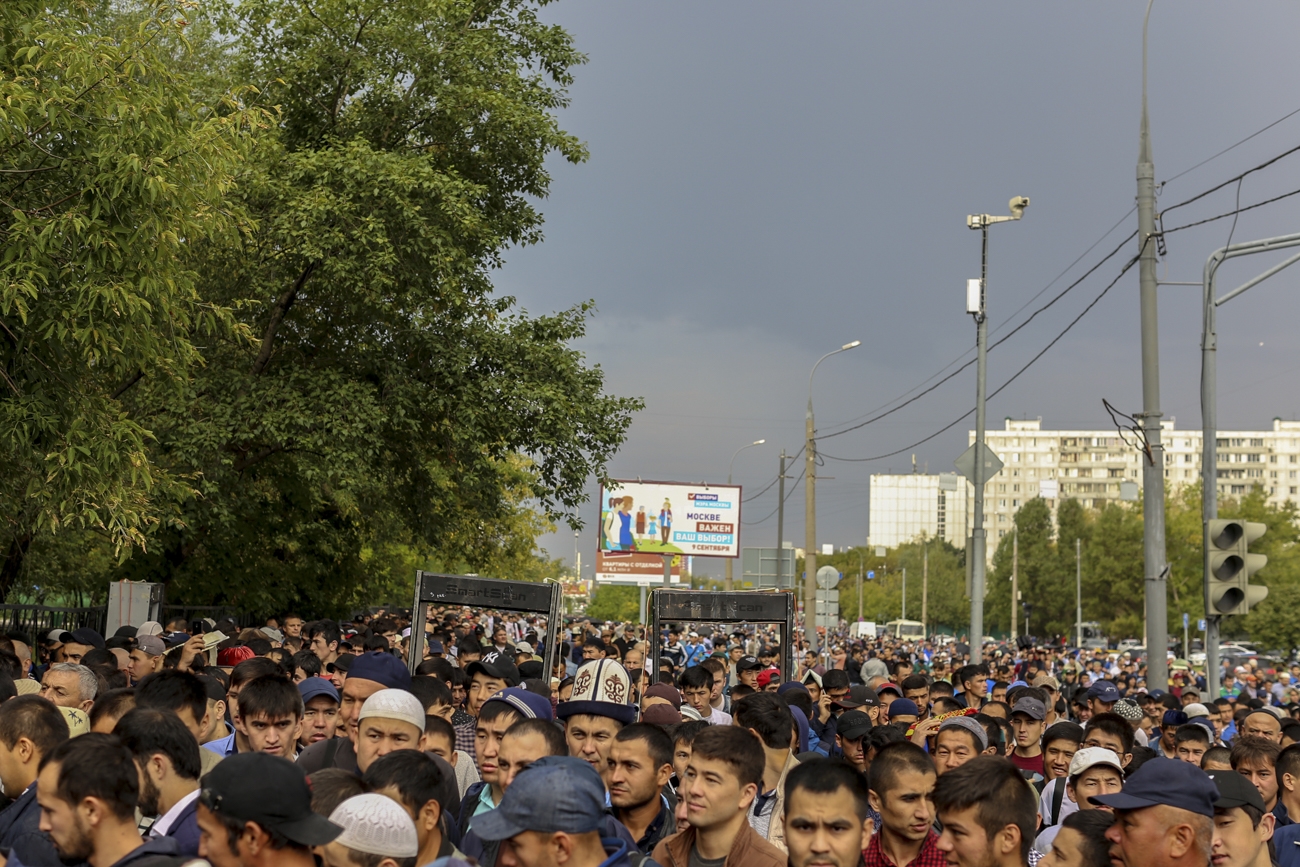 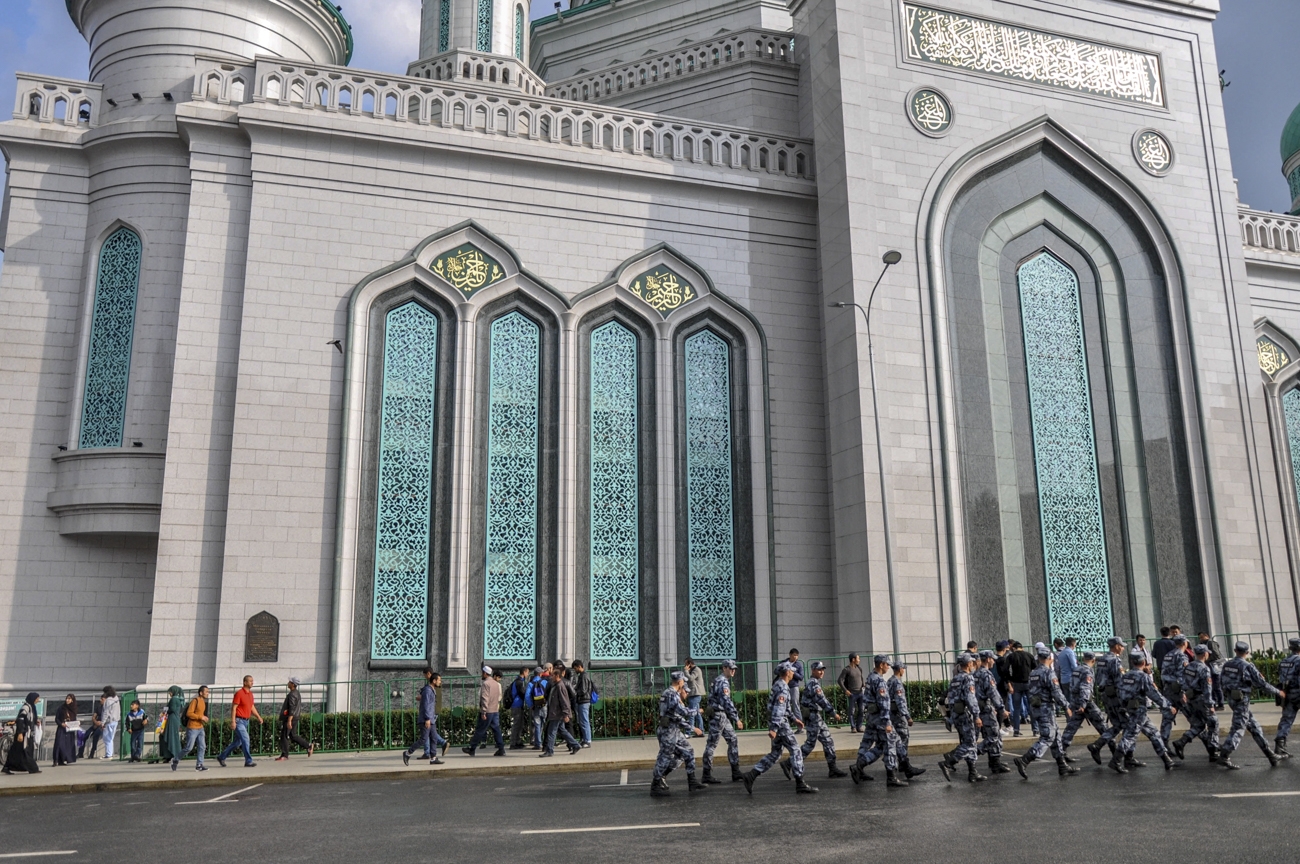 As the worshippers leave, the police also march away. 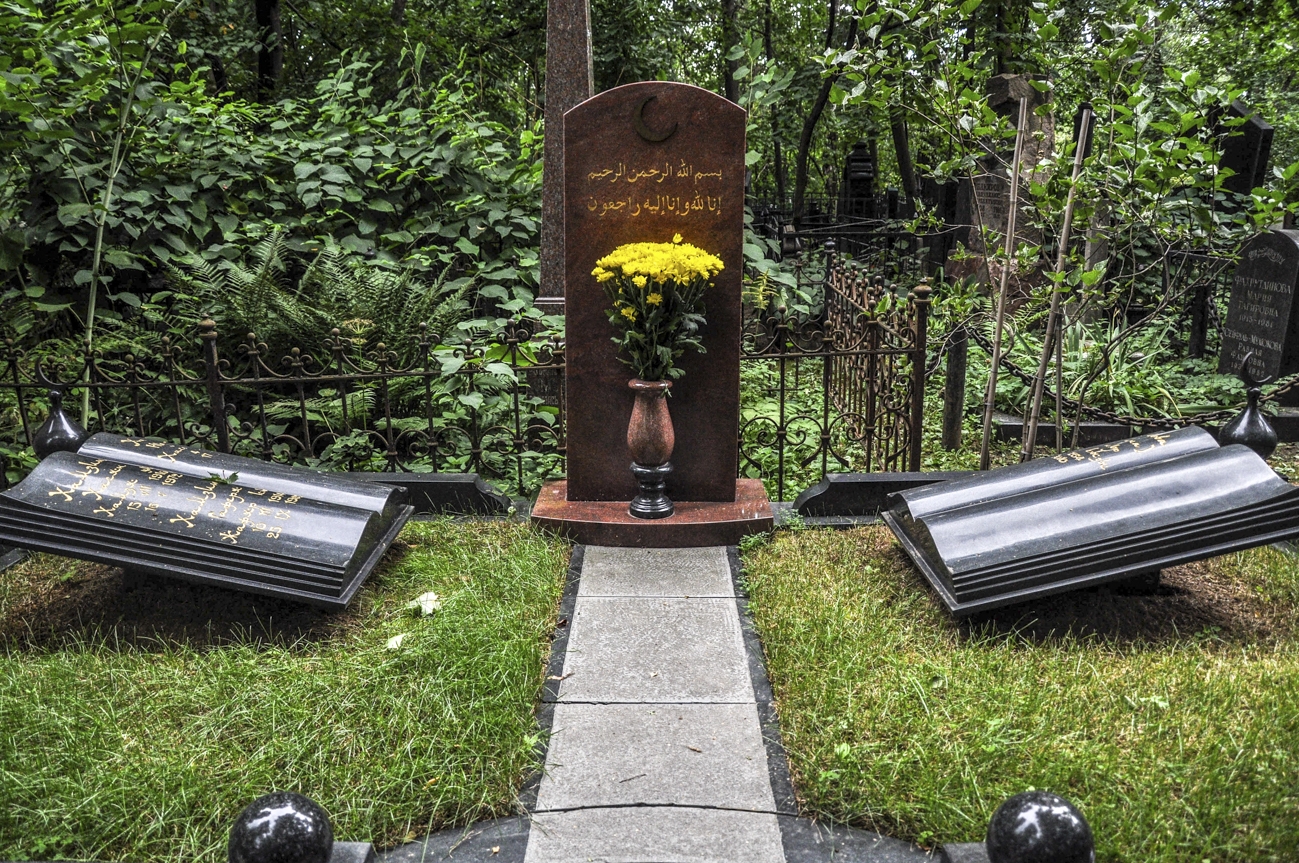 Part of the Kurban Bayram tradition is visiting cemeteries of relatives to honor the dead. 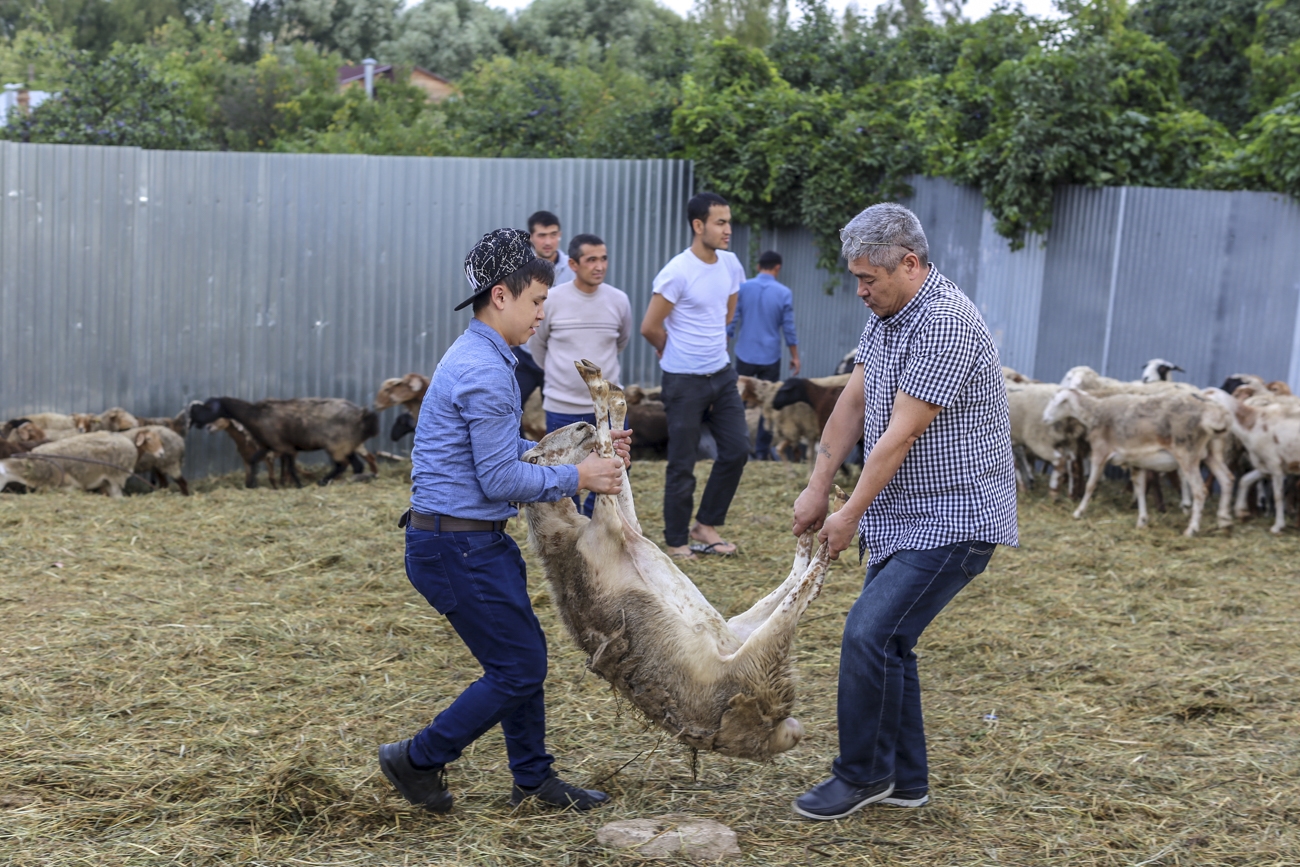 The most important ritual of this holy day is the animal sacrifice. At a designated location on the outskirts of Moscow, worshipers select a lamb to sacrifice. 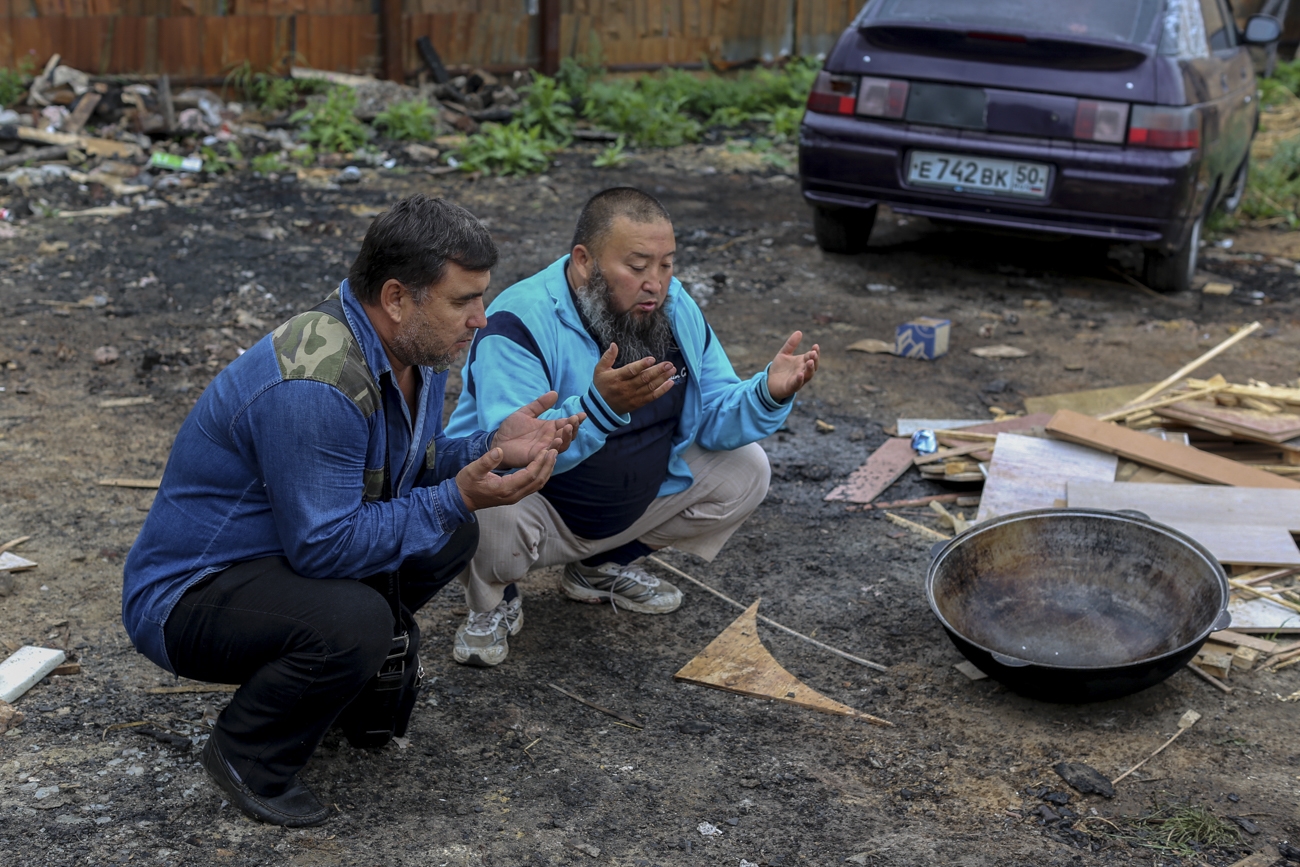 Men praying at the slaughterhouse. 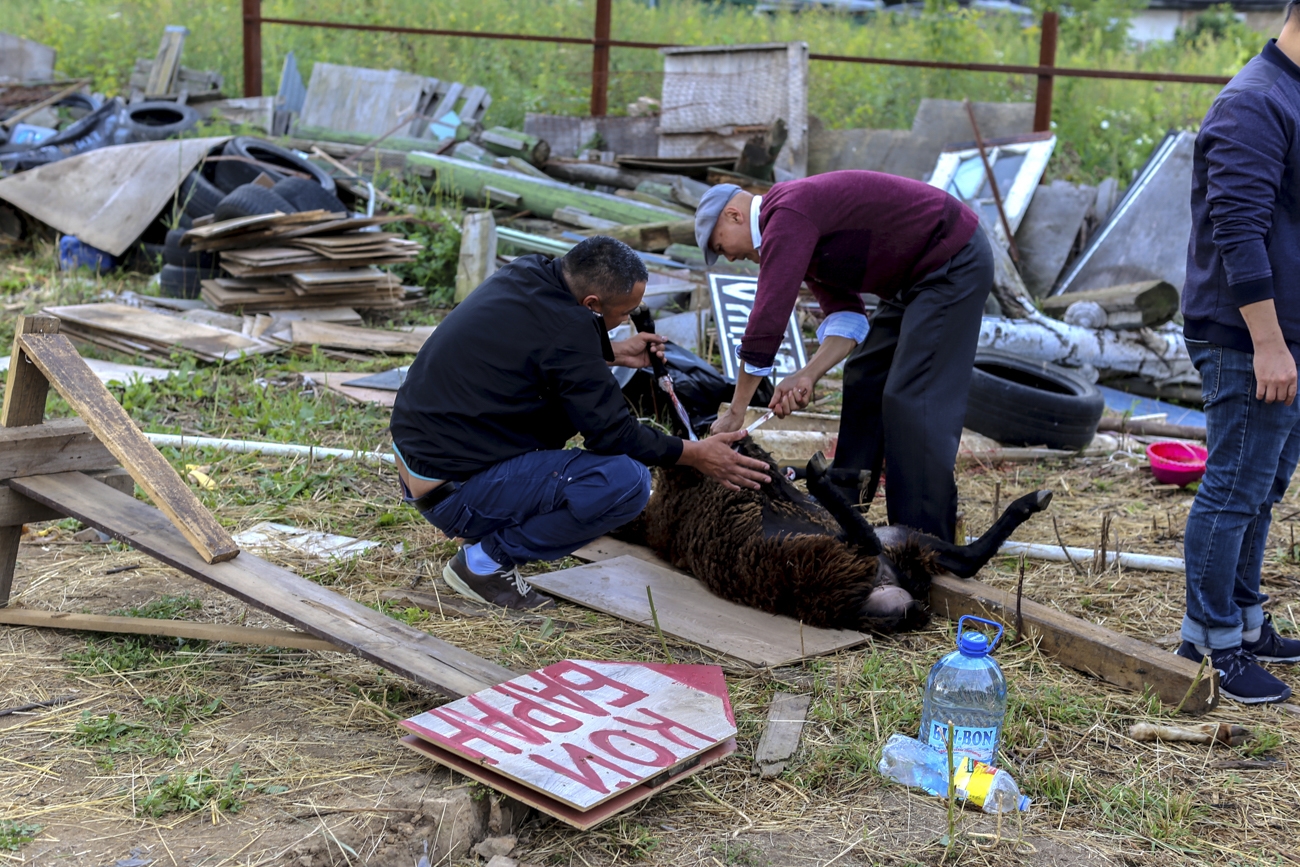 The ritual sacrifice is in celebration of Abraham's willingness to sacrifice his son, Ishmael. 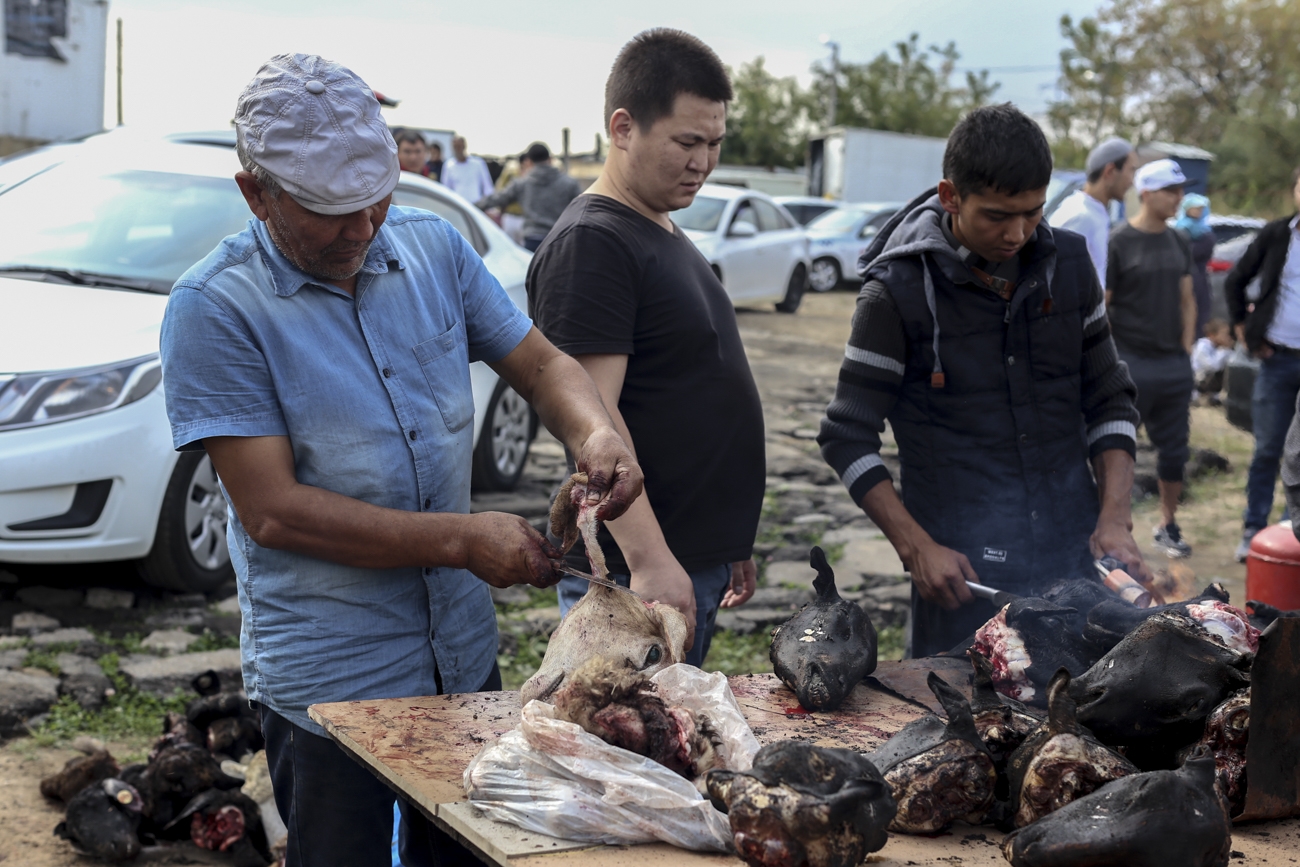 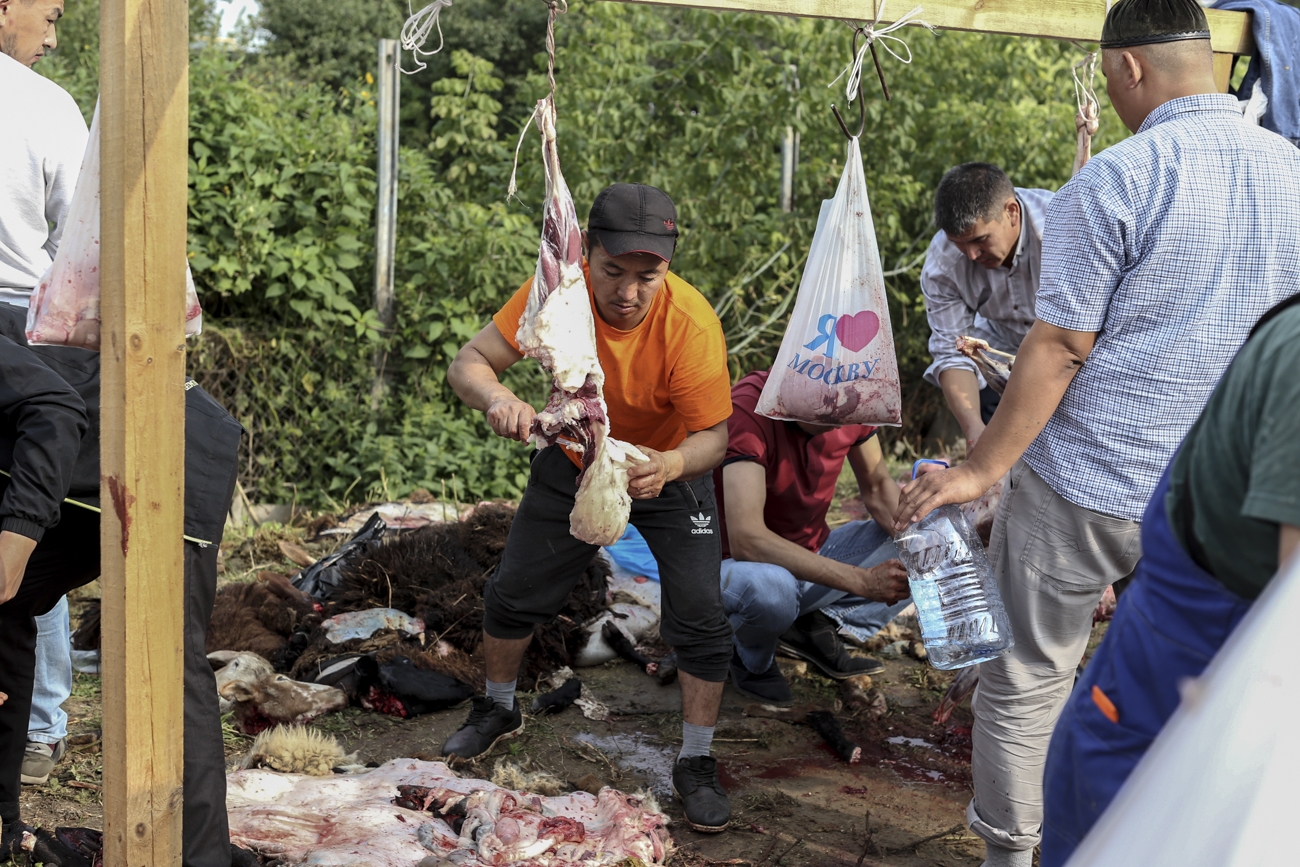 A man skins the lamb in preparation to be eaten. 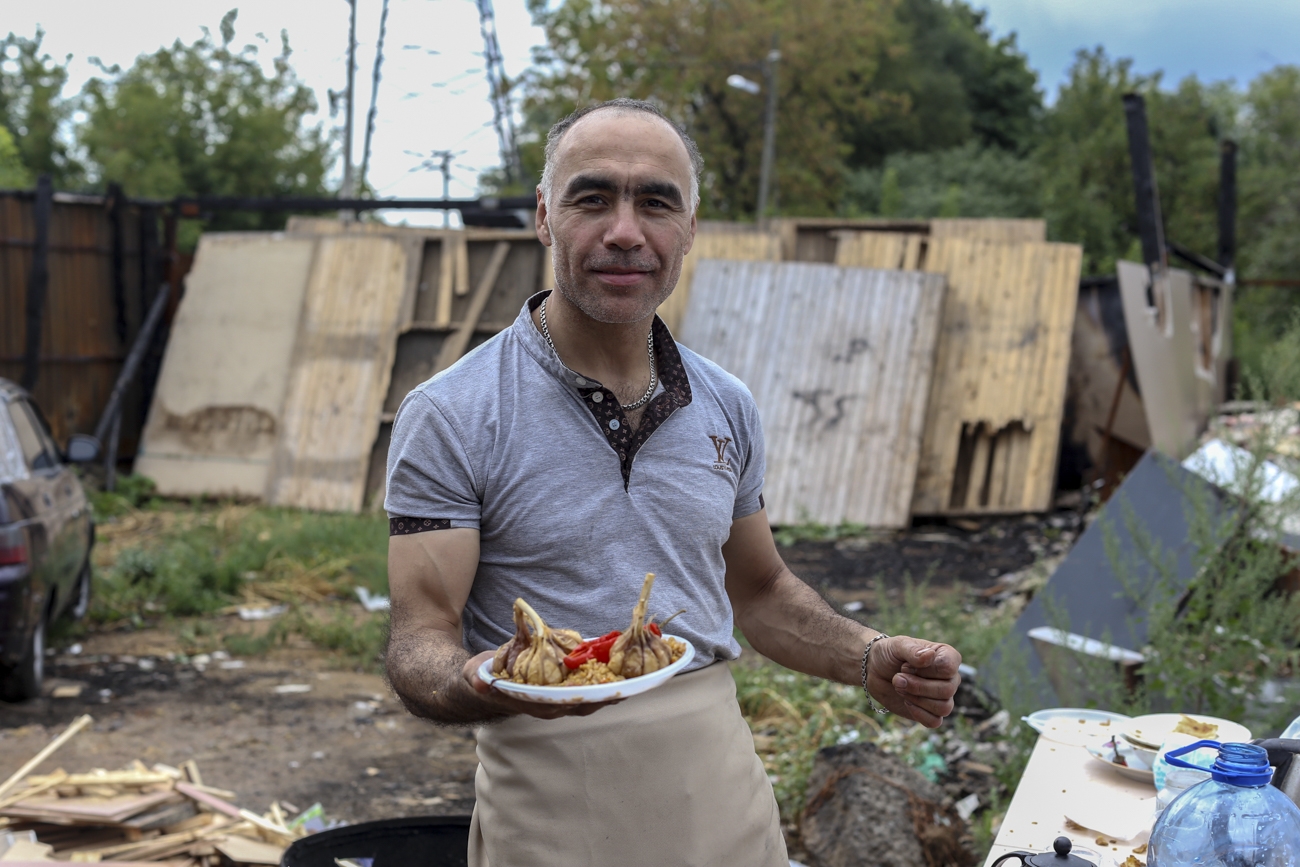 Donic Abdullaev, an Uzbek from Tashkent, cooks a special, spicy plov for his fellow worshipers. 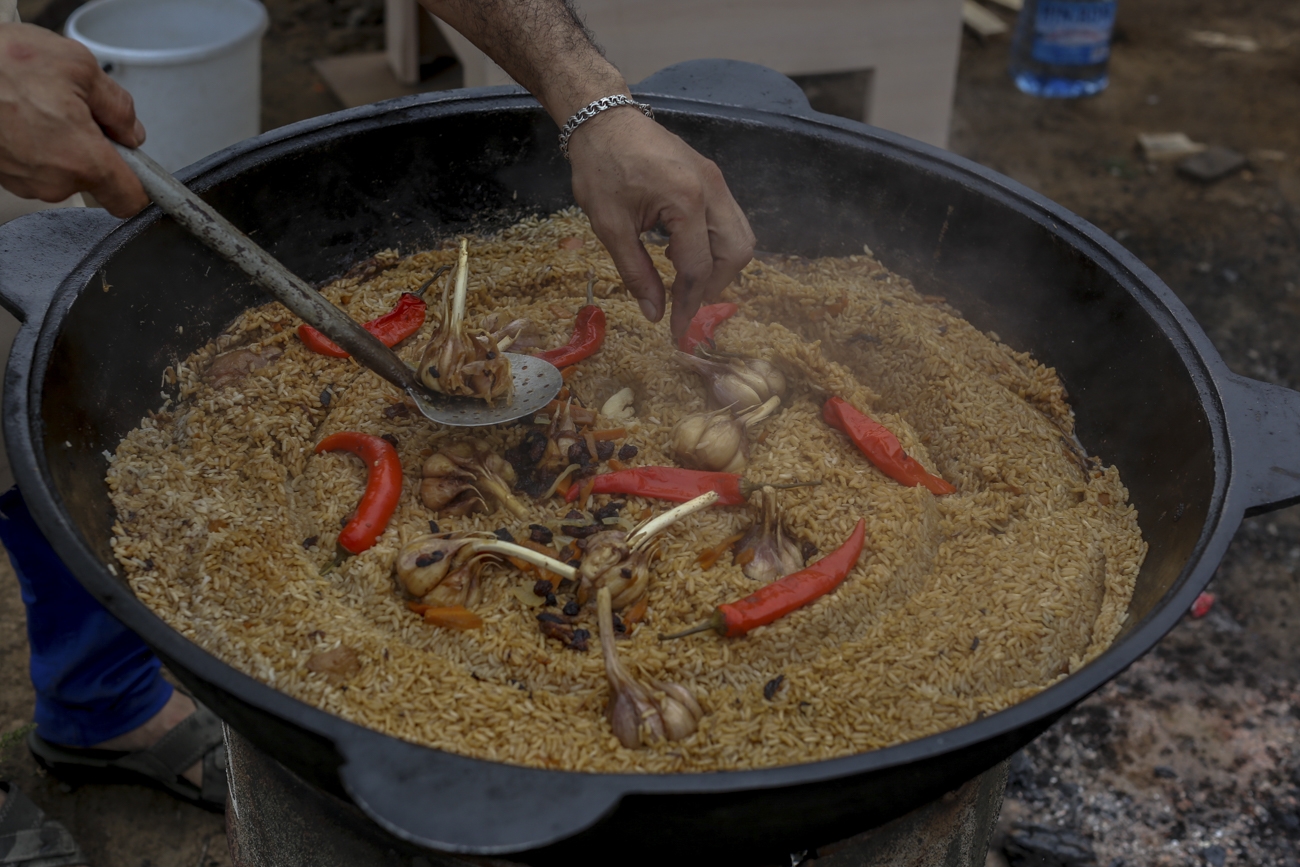 The plov was made with Kazakh meat, Tajik rice, and Kyrgyz spices — a metaphor, Abdullaev said, of the Central Asian mix of cultures. 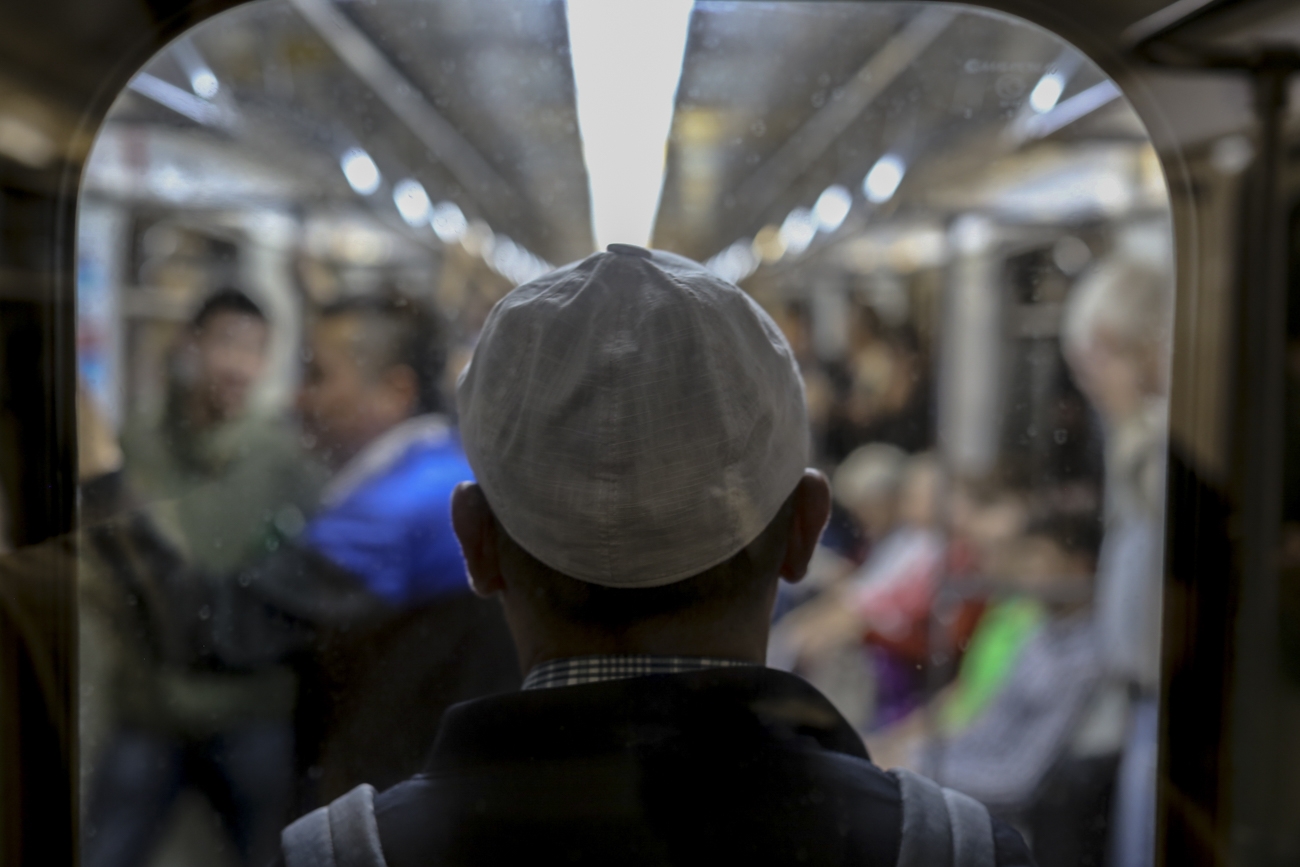 It's a long, exhausting day for worshipers. Since Bayram is not a federal holiday in Russia, most stay up all night preparing, and work during the day.
prev
next

Worshipers began to gather outside the Yardyam Mosque in north Moscow long before dawn. Some held heated debates, some slept. Some gathered on the grass to pray together on colorful mats.

A few people hawked prayer mats and perfumes; other collected donations for charity.

Thousands streamed out after the service finished. A Kyrgyz family headed to a nearby farm to buy a sheep, slaughter and clean it, and then take it home to eat.

Known in Arabic as Eid al-Adha, the Muslim Feast of the Sacrifice is among the most important in the Islamic calendar. It includes three days of prayer and, for the devout, the sacrifice of an animal to celebrate Abraham’s willingness to sacrifice his son, Ishmael. Families and friends feast together and donate a portion of the meat to charity.

The makeshift slaughterhouse was hard to find. Beyond Moscow’s ring road, in a village called Chelobityevo, it was marked only with a hand-painted sign saying “live sheep.” By the time they arrive to pick their sheep, worshipers are often exhausted: They may have stayed up all night preparing. Most work during the day, since Bayram is not a federal holiday. For a few extra rubles, butchers are available to do the ritual slaughter for them.

Before 2010, the sacrifice would take place outside homes. But some Russians, repulsed by the blood and the spectacle, pushed for a ban. The Moscow government and Muslim leaders came to an agreement to perform the ritual only in designated locations outside Moscow’s center, hoping to minimize disruptions and improve perceptions. The government provides buses for worshipers who want to take part in the sacrifice or witness the event themselves.

The holiday fell this year between August 21 and 25. Officials told state news agency TASS that more than 226,500 people took part in celebrations.

The man who took Eurasianet to the slaughterhouse in Chelobityevo was wary of inviting the press. Abdullah, who refused to give his last name, initially said it would be impossible to witness the ritual: “It is not an official government holiday, [photographing it] will only create more trouble. And if this is shown on TV, the police will come and shut this whole thing down.”

Yet in the end, Abdullah, a burly, bearded man from Osh, welcomed Eurasianet with warm Central Asian hospitality into the scrap metal warehouse where he’d organized the slaughter.

Volunteers directed parking and a couple of people manned the entrance. Although seemingly chaotic, there was a process: selecting the animal, weighing it, and then paying (a sheep goes for 5000 to 8000 rubles, or $75 to $120), the ritual of sacrifice, skinning the carcass, chopping and then bagging up the meat to take home in the back of a car. All the while, plov simmered in the backyard.

On the second day, it is common for people to visit the cemeteries of their relatives and honor the dead by cleaning the graves, and leaving fresh flowers. We headed to the Muslim cemetery near Danilovski market in south-central Moscow. There a mullah explained the ritual animal sacrifice: “You read the prayer, the Quran, and then do the deed. During the prayer you ask to reward the deceased with heaven and then go and do good deeds for the living.”

Islam Gaynullin, from Bashkortostan, a Russian region near the Ural Mountains, came with his mother to clean the grave of his father and leave flowers. He explained that coming to the cemetery is not essential, but tradition. “You can read the prayer at home if you want to, but sacrificing the sheep is actually the most important thing. I haven’t cut one myself yet. There are still two days left, till dusk,” Gaynullin told Eurasianet.

Ask Muscovites what they think of Kurban Bayram and you will often receive a sharp, critical response about how the holy day is celebrated in the Russian capital. Many ethnic Russians call it barbaric, and peddle negative stereotypes about the migrants from Central Asia and the Caucasus who celebrate the holiday.

Russian nationalists often use the holiday to highlight the growing numbers of Muslims in Russia. Protestors gather annually to chant slogans like “Russia for Russians” and accuse migrants of receiving extra benefits from the state. In a report released August 27, the Levada Center, a respected pollster, found that 30 percent of Russians would like to see a ban on Central Asians entering the country.

Russian authorities have taken steps to combat offensive comments about the Muslim faith, labeling them as inciting violence and extremism. A flood of extremism cases are now being filed in Russia, and the topic is often the subject of media attention. In a recent case, a man from Novosibirsk received a 2.5-year suspended sentence after making a joke about Kurban Bayram in a comment on a social media post.

By evening in Chelobityevo, the plov was ready. Dozens gathered around the large kazan – a specialized cooking pot – first reciting a lengthy prayer and then diving into the special spicy plov cooked by Donic Abdullaev, an Uzbek from Tashkent. Abdullaev beamed that he used Kazakh meat, Tajik rice, and Kyrgyz spices to make an Andijan-style plov with chilies and garlic. It was a metaphor, he insisted, for the mix of cultures celebrating the holy day together.

Abdullaev reckons he knows 130 recipes for plov. “It’s different here. Back home you ask [your boss for the holiday off work] and they give it you. Here you ask, and they won’t. It’s all sell, sell. Other people say they’ll buy some meat, cook a dinner, and have it with family – but they don’t sacrifice a sheep. At this celebration, I am cooking and eating together with all Muslims.”