The German settlers arrived in Azerbaijan 200 years ago this month. 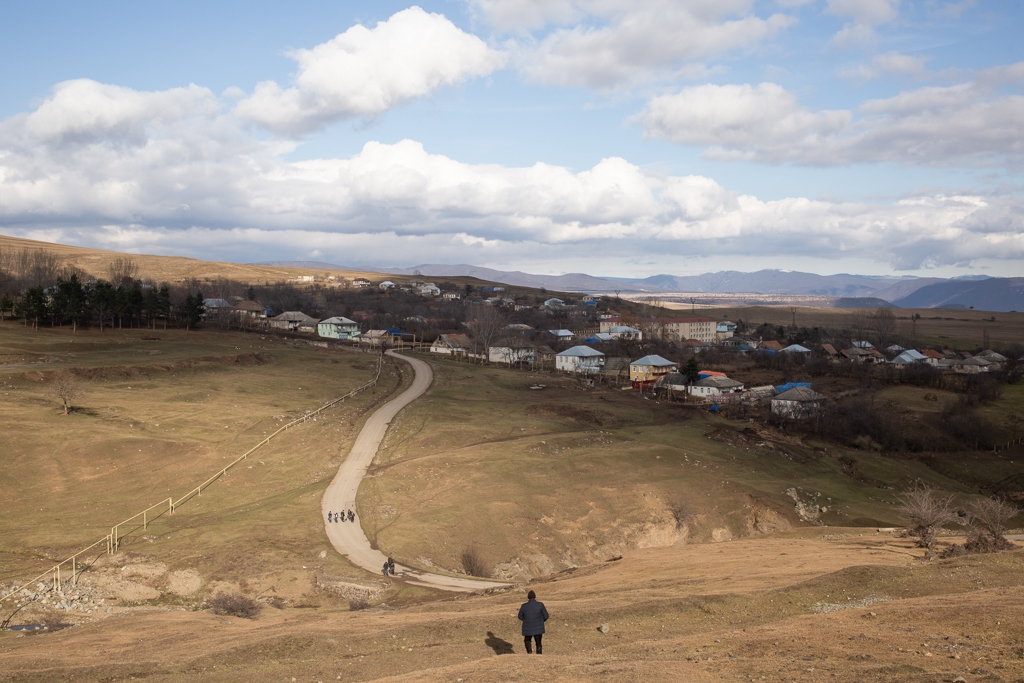 The former colony of Waldheim in Georgia. It is now called Ipnari. (All photos Thomas Marsden)

This month Goygol, a town nestled in the foothills of the Caucasus Mountains, celebrates its 200th anniversary. Yet this is no ordinary Azerbaijani town. Goygol used to be Helenendorf. And it was founded during Easter 1819 by religious migrants from Germany.

The German settlers were driven by political and economic hardship in the wake of the Napoleonic Wars. They believed that, with the end of the world imminent, they would find refuge and religious freedom in the East. The settlers were also offered benefits by Russian Tsar Alexander I, including exemption from taxes and military service, and loans.

Other colonies sprung up over the next century until by the early 1900s there were well over a dozen German villages across Georgia and Azerbaijan that prospered, mainly from winemaking.

"Every Sunday, the Germans had a recreational park. There was fish, chess, dominos, all sorts of games in the evening, people came from work and played. That’s how they lived – very cultured,” recalled Yunis Hajiyev, whose mother was German and who still lives in Shamkir, Azerbaijan, formerly the colony of Annenfeld, where he was born in 1928. “They worked a lot; sweat came off their shirts they worked so hard. In the evening they got washed, sung songs and walked through the streets to the park.”

But following the Russian Revolution and the rise of Josef Stalin, the Caucasus Germans – Kaukasiendeutsche, in German – found themselves in a precarious position. Hitler’s attack on the Soviet Union in June 1941 was a decisive turning point: Stalin classified them as potential collaborators.

That October the Germans were herded onto trains bound for the steppes of Kazakhstan, like so many other Soviet minorities during the war. According to EuroKaukAsia, a project at Humboldt University in Berlin, some 46,000 Germans were forcibly resettled from the Caucasus.

"People took what they could carry with them and got on the train. We travelled on the train twice and twice on a steamboat,” said Werner Bekker, who was deported from a village in Azerbaijan at the age of six and now lives in Ridder, formerly Leninogorsk, in northeast Kazakhstan. “And then in November – we must have been travelling for about a month – we were met at the pier in the Kurchum region [in eastern Kazakhstan] on sleds. There was snow already. It was warm where we were from in the Caucasus. We didn’t have winter clothes, only autumn ones. Everyone froze."

Many, especially the elderly and the very young, died from cold and hunger. One former resident of Helenendorf, Angelika Hummel, recalled being told that the resettlement was only temporary. But in fact their homes had been occupied and the exiled Germans say they never received any form of compensation. Moreover, their ordeal didn’t end there. Men and women were sent to labor camps in remote parts of the USSR – Komi, the Urals, Chelyabinsk and Karaganda – while the young and old remained in the remote villages on the steppe.

Even after Stalin’s death they were not allowed to return to the Caucasus. In any case, it was over a decade before anyone was allowed to talk openly about the deportations: The older generation had passed away and the younger ones had nothing to return to.

Many stayed in the multi-ethnic melting pot that was Soviet Kazakhstan. Some moved south, attracted by the warmer climate that was similar to the Caucasus, said Yevgeniy Raitenbach, whose parents moved to Uzbekistan. After all, said one descendant of Germans from Helenendorf who now lives in Almaty, “grapes don’t grow in the north of Kazakhstan.”

Later, with the collapse of the Iron Curtain and the fall of the USSR, another great wave of migration began as Russian-speaking Germans, including those from the Caucasus, began to flock to a newly reunited Germany, the ancestral homeland, in a process that continues to this day.

Even there they struggle. For those born in the Caucasus and educated in its German schools, deported to Kazakhstan and sent to work in Siberia, the concept of home is a fleeting one. But for 93-year-old Angelika Hummel, who now lives in Baden-Württemberg, home is clear: “For me, the Caucasus is my homeland and nowhere else,” she said, though she had lived there for just 16 years. 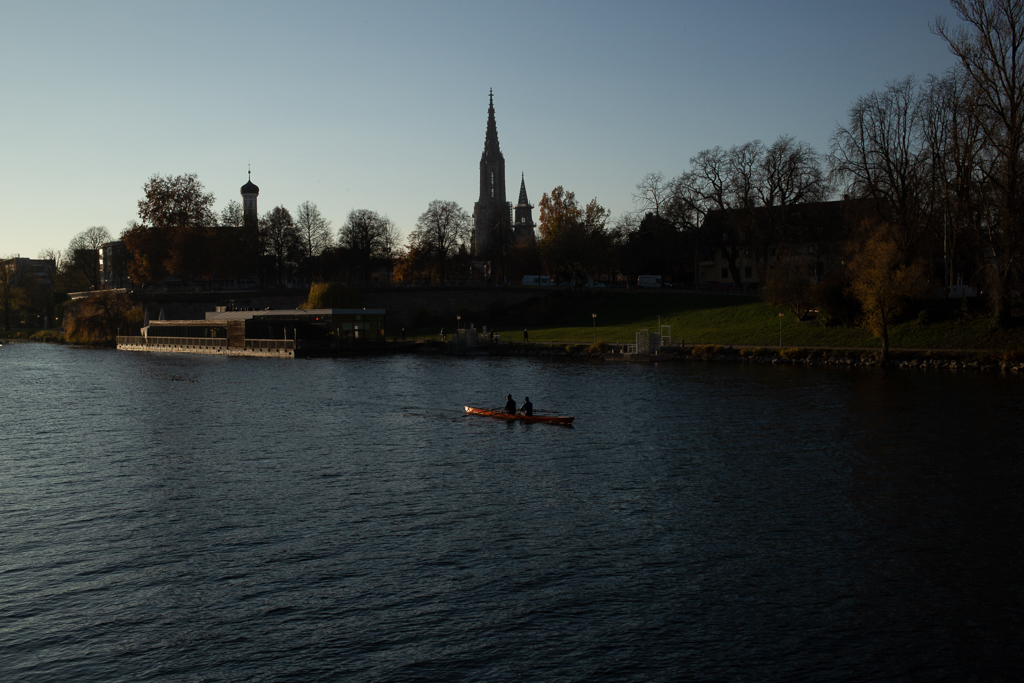 The first Caucasus German settlers departed the city of Ulm in Württemberg in 1817, travelling in wooden boats along the Danube. 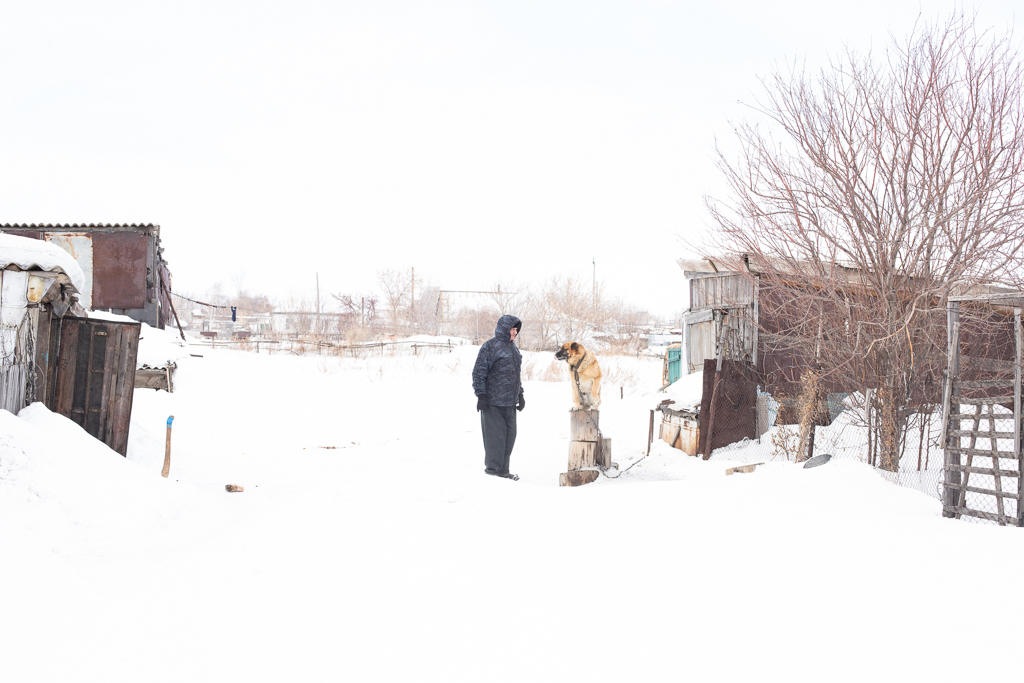 Henrikh Gan, deported from the Volga region, is one of Zhuravlevka’s last German residents. Many families deported from Helenendorf also ended in this village on the steppe, about 190 miles northwest of Kazakhstan’s capital. 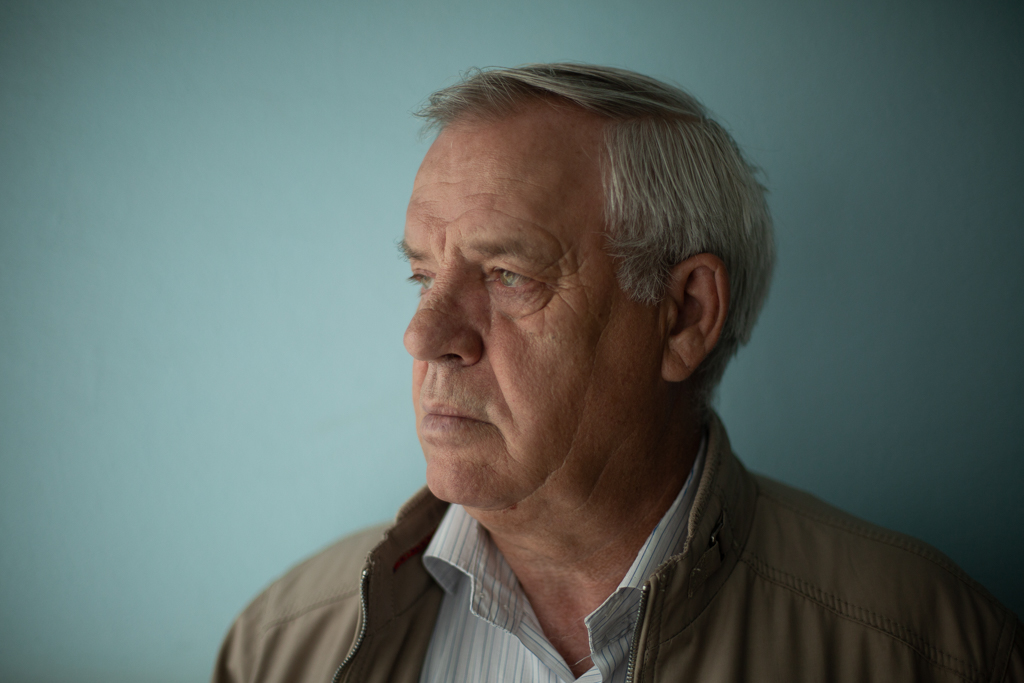 Yevgeniy Raitenbach's family was deported from Asureti in Georgia and Helenendorf in Azerbaijan in 1941. He now lives in Petropavlovsk, Kazakhstan. 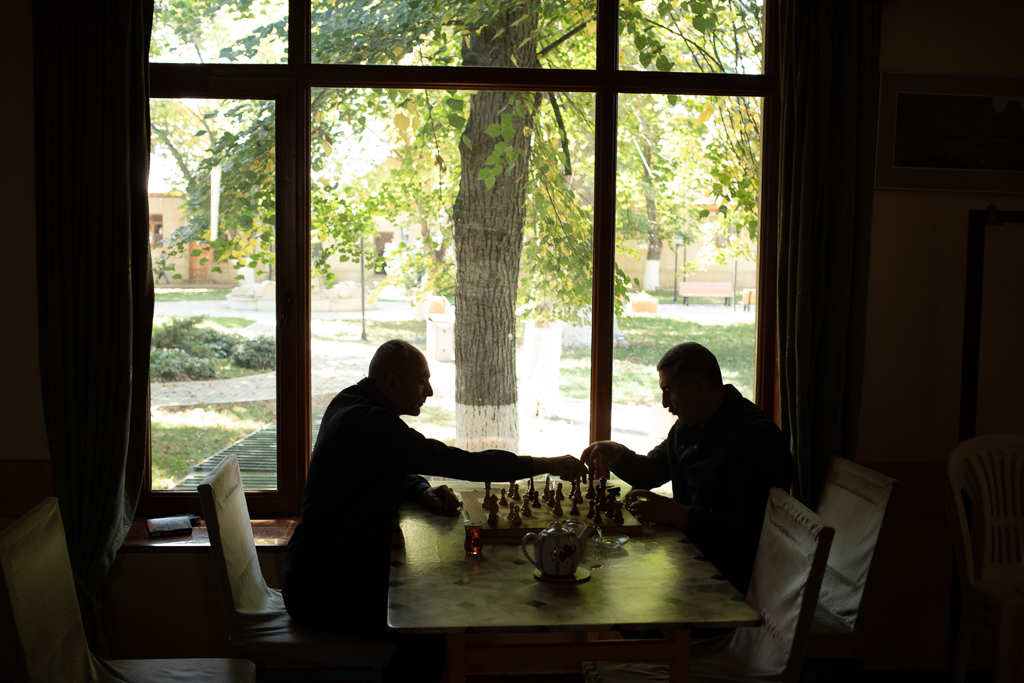 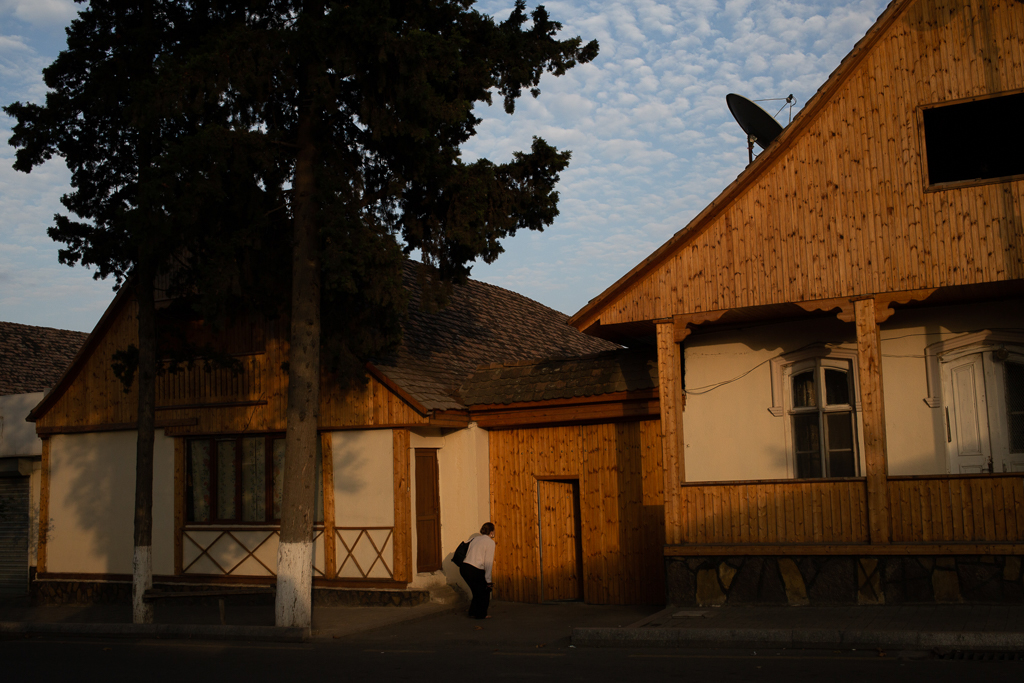 A descendant of Germans from Helenendorf searches for the house in which her grandmother lived. 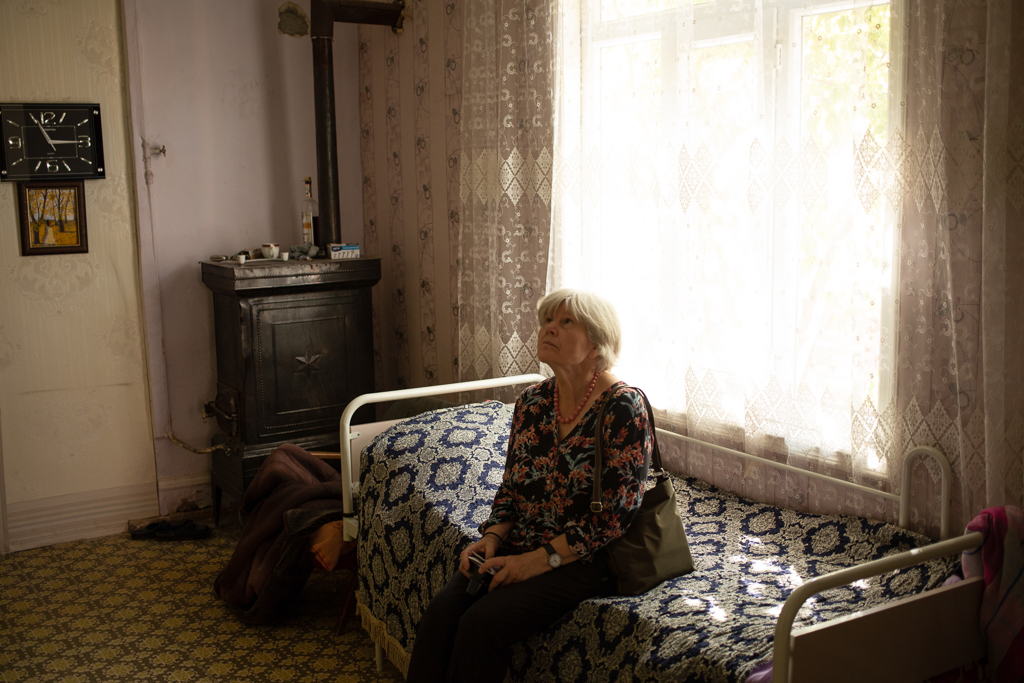 A descendant of Germans from Helenendorf revisits her father's old home in Goygol. 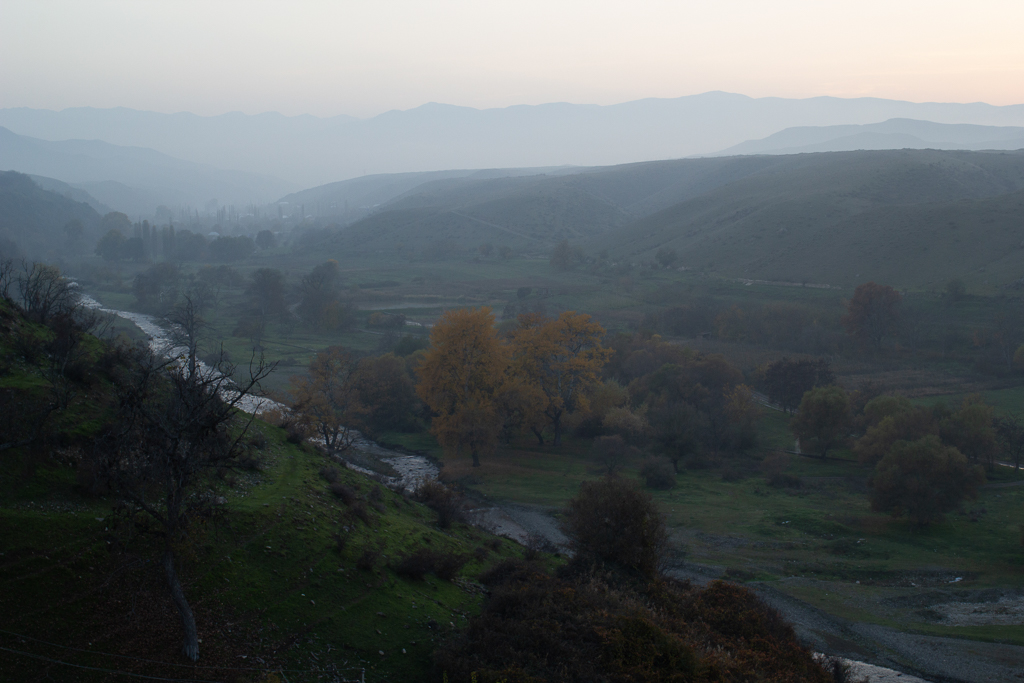 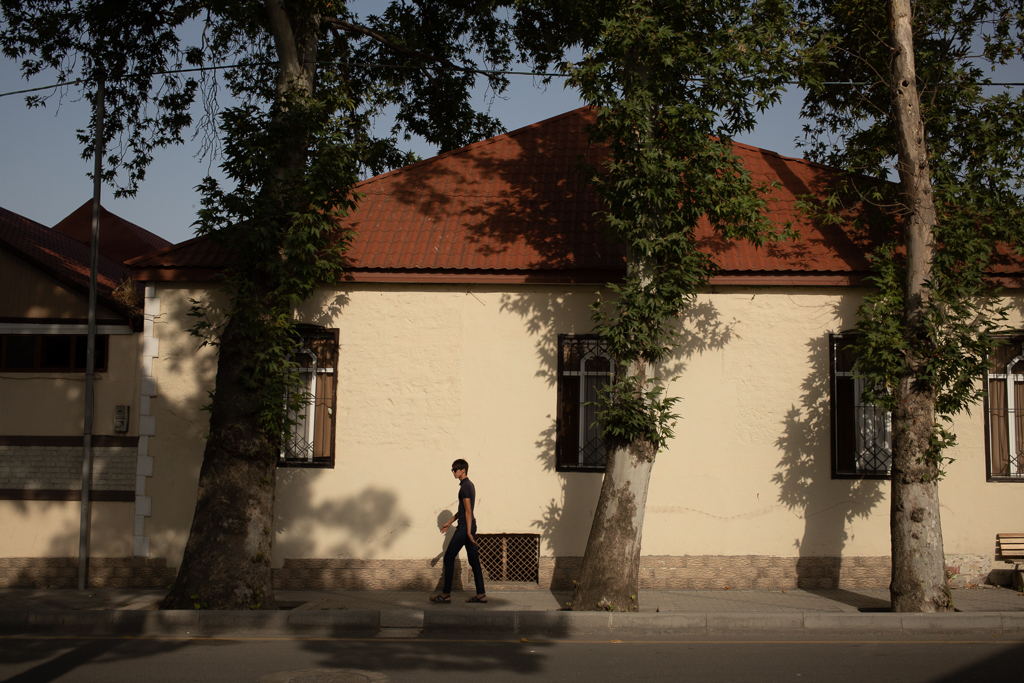 Shamkir was the second German colony to be founded in Azerbaijan, shortly after Helenendorf. It was originally called Annenfeld. 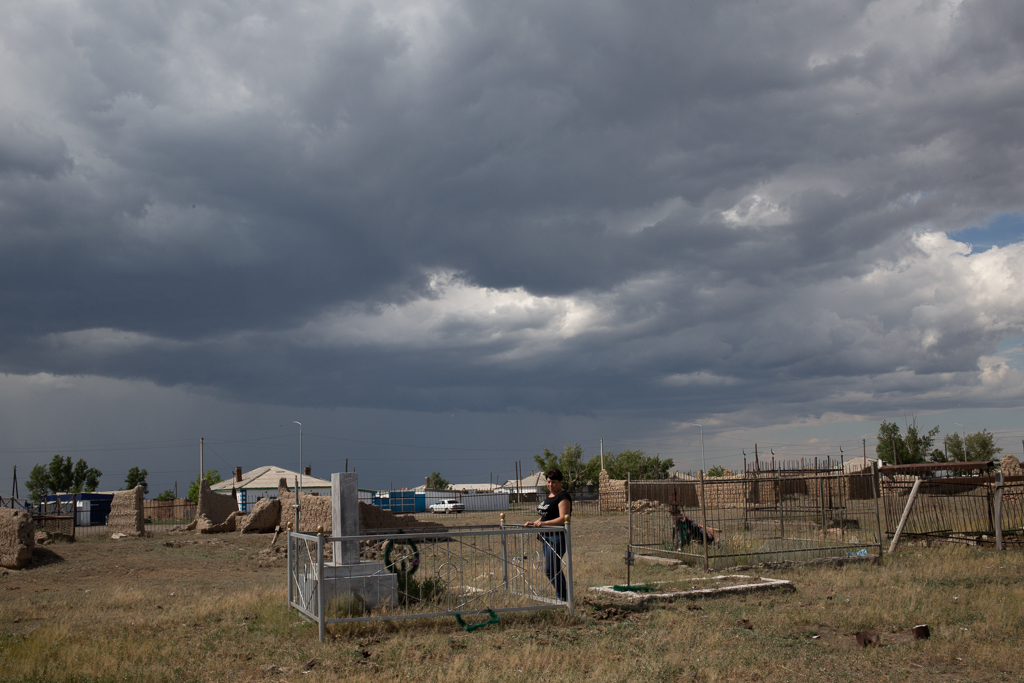 Lidiya Ostroverkhova visits the grave of her grandfather, Ewald Bräning, in the village he was deported to: Sarzhal, near Semey, Kazakhstan. 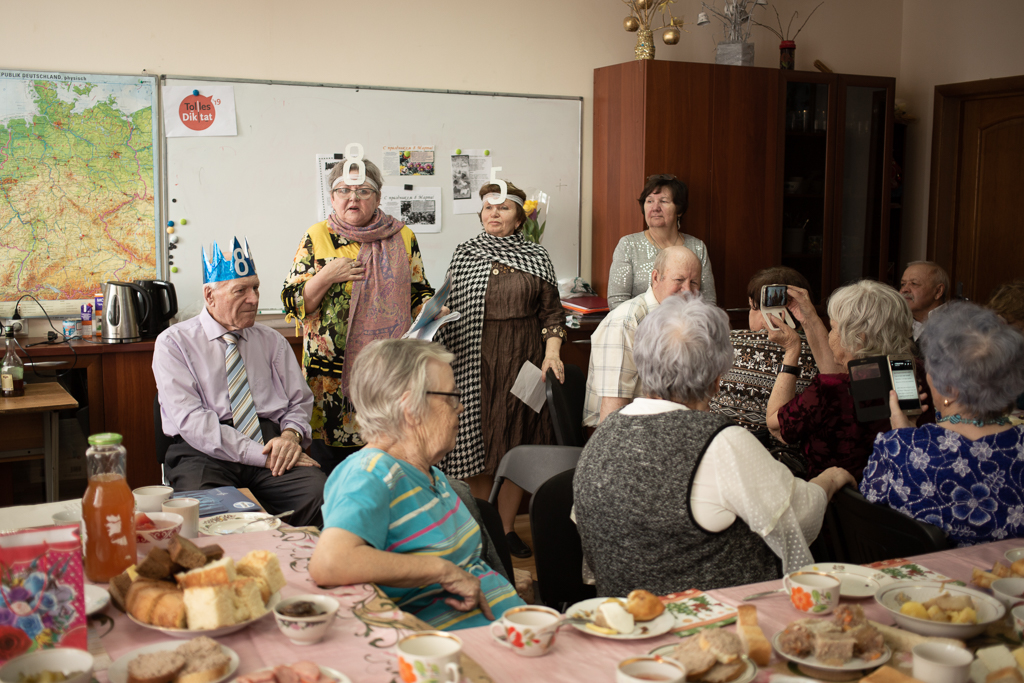 Victor Raitenbach (far left), deported from Helenendorf in 1941, celebrates his 85th birthday in the company of other Germans living in Pavlodar, northeast Kazakhstan, last month. 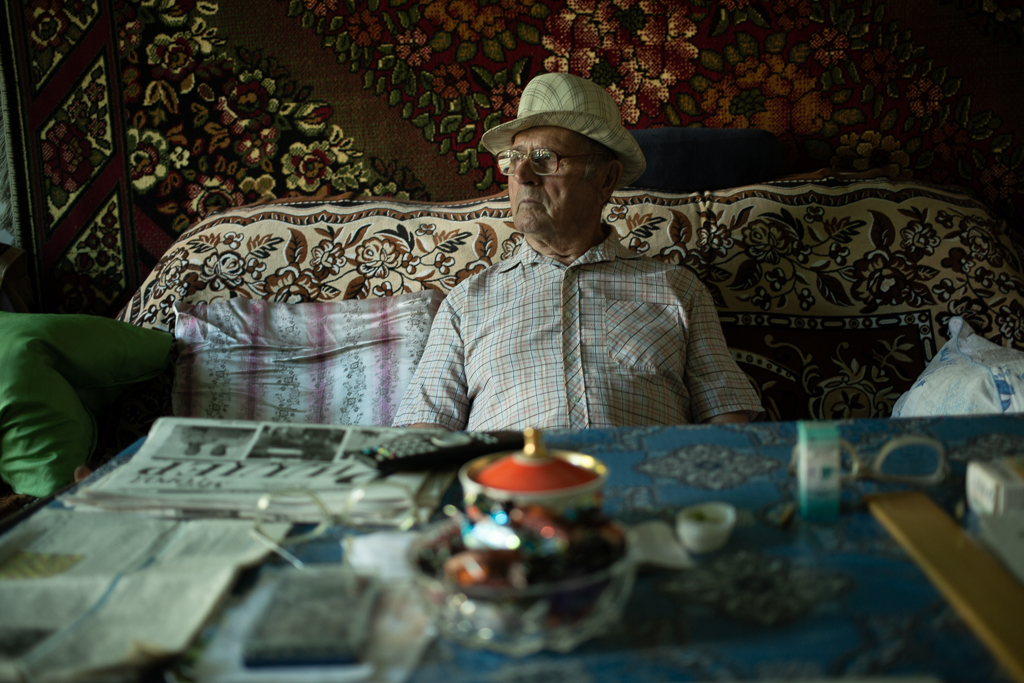 Werner Bekker was deported from Annenfeld – now Shamkir, Azerbaijan – to eastern Kazakhstan at the age of 6 in 1941. He still lives there. 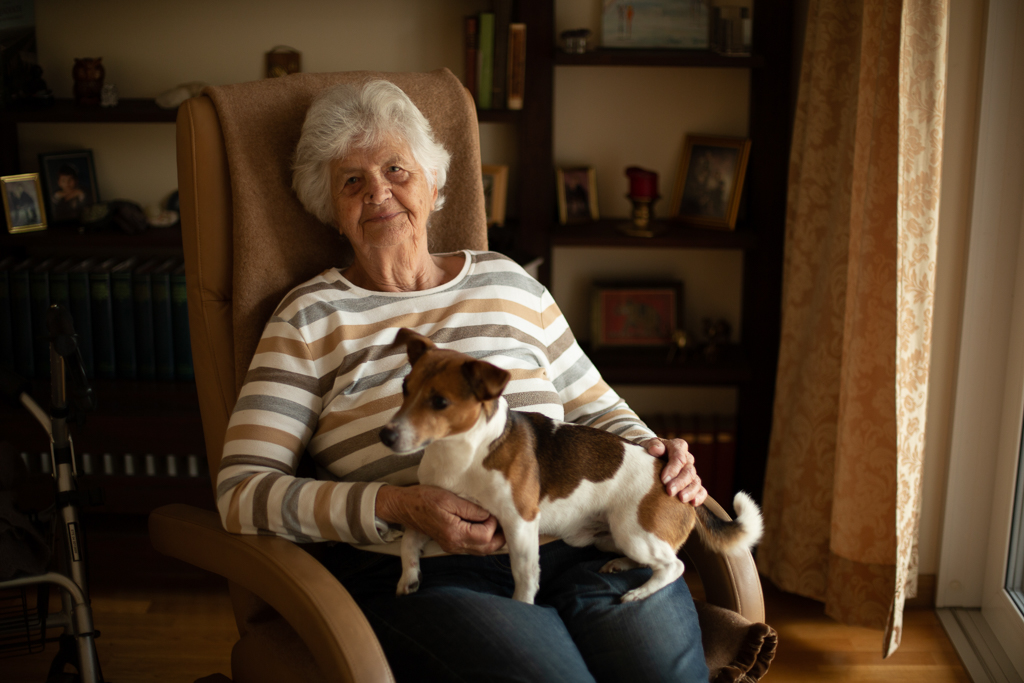 Luisa Oksas was deported to northern Kazakhstan from Georgsfeld, a sister colony of Helenendorf, at the age of 13. She now lives in Bad Dürkheim, Germany. 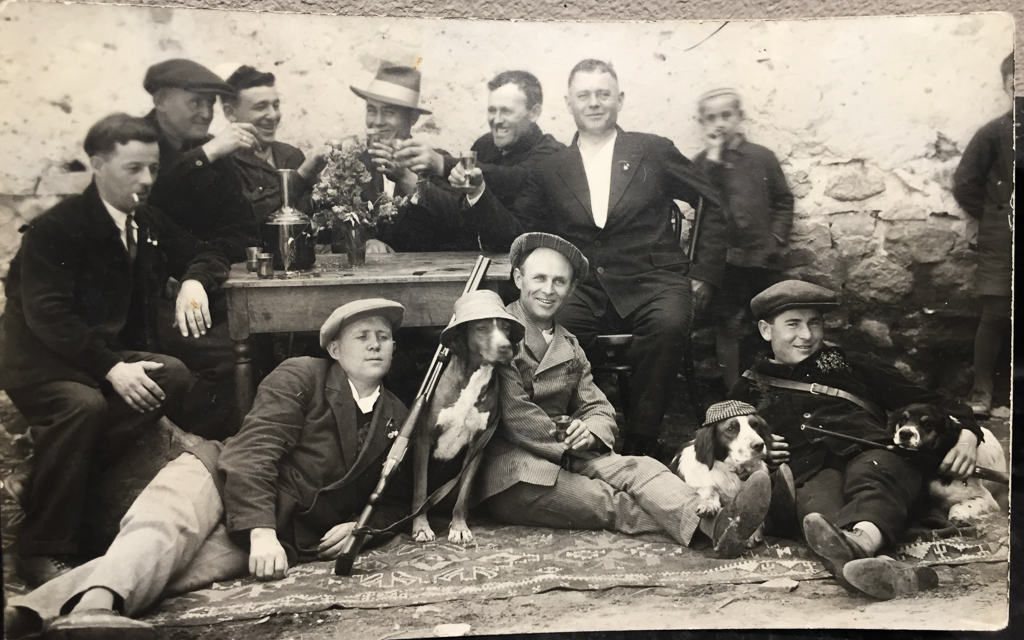 A hunting party in Georgsfeld (Azerbaijan) before the Germans were deported (exact date unknown). (photo courtesy of Luisa Oksas) 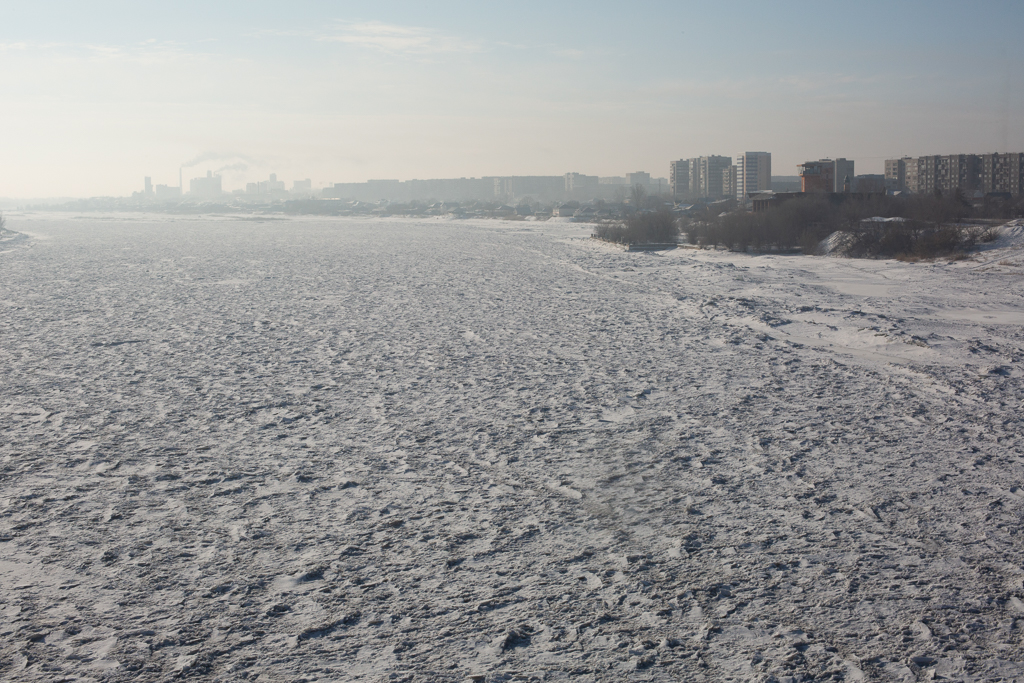 Many Germans reached isolated destinations in eastern Kazakhstan along the Irtysh River, pictured here in Semey. 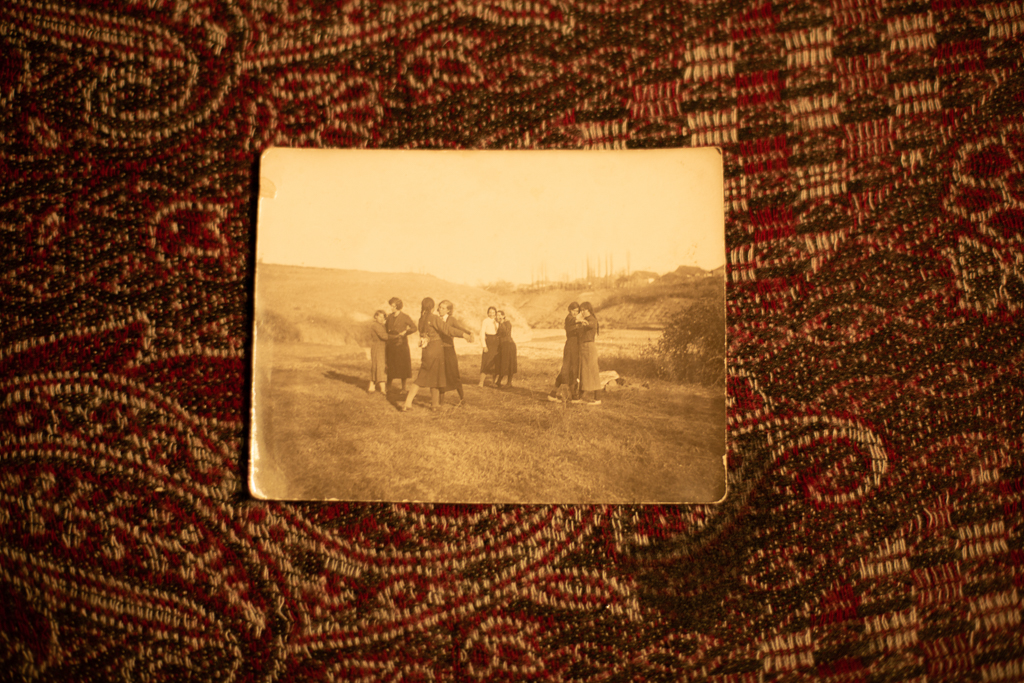 Girls dancing at a school celebration in Georgsfeld, 1940. (photo courtesy of Luisa Oksas) 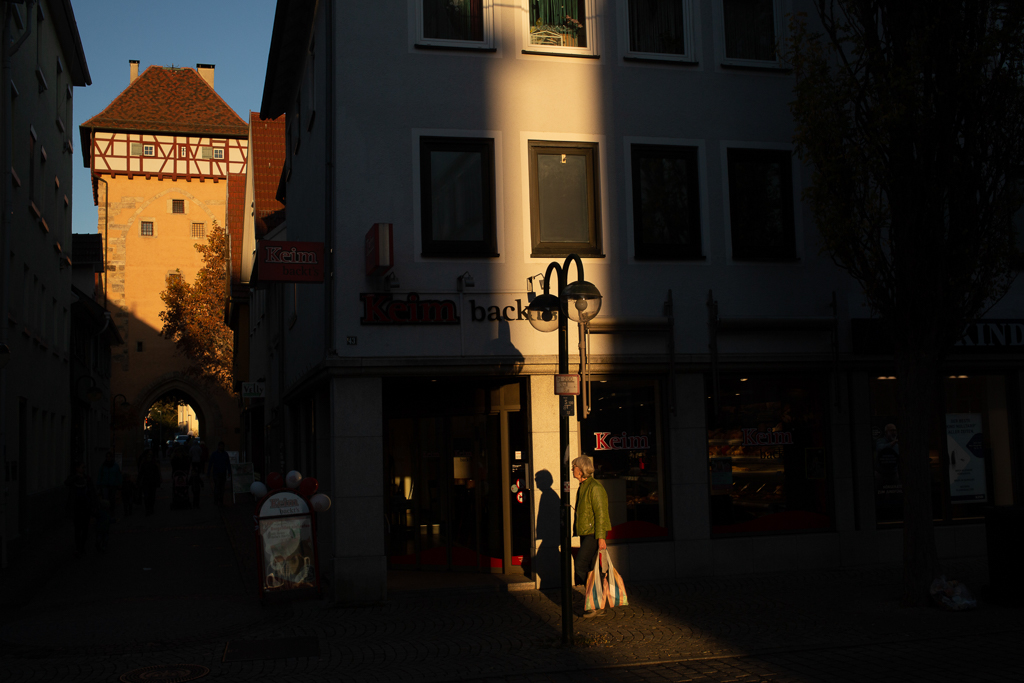 Many of Helenendorf’s founding families came from the town of Reutlingen in Württemberg. 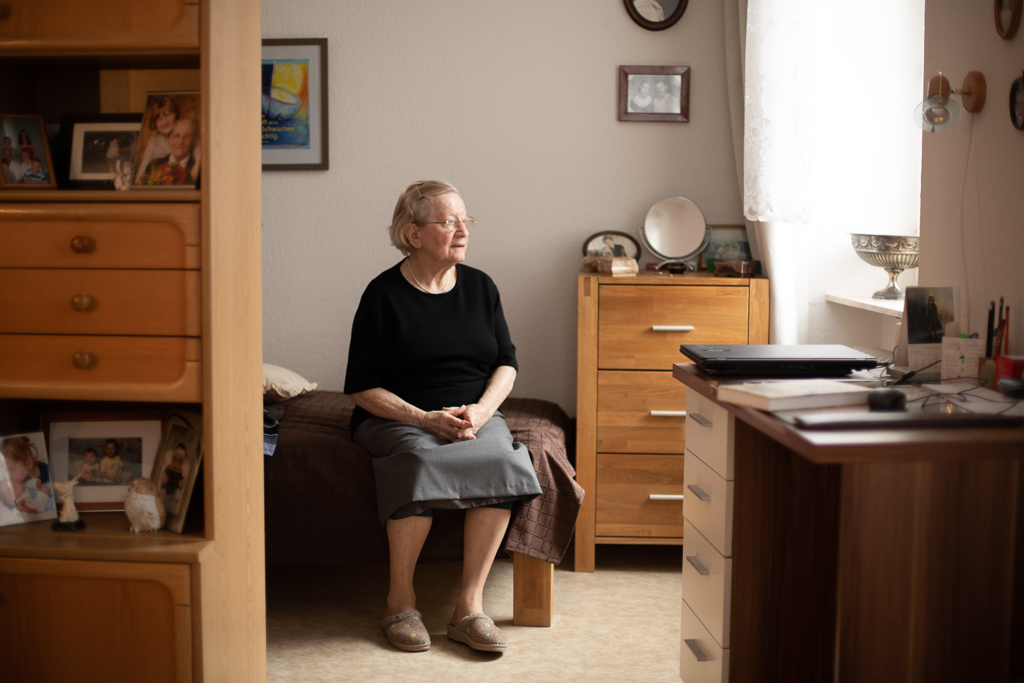 Angelika Hummel was 16 when she was deported from Helenendorf to Zhuravlevka in northern Kazakhstan. She now lives in Karlsruhe, Baden-Württemberg, Germany.

Thomas Marsden works with the Azerbaijani tourism board. He self-financed this independent project.