Piecing together the unrest in Kazakhstan’s third-largest city

An unknown number of people were killed in the Shymkent unrest, which appears to have followed a pattern seen in Almaty: Provocateurs instigate violent clashes and police respond with deadly force. 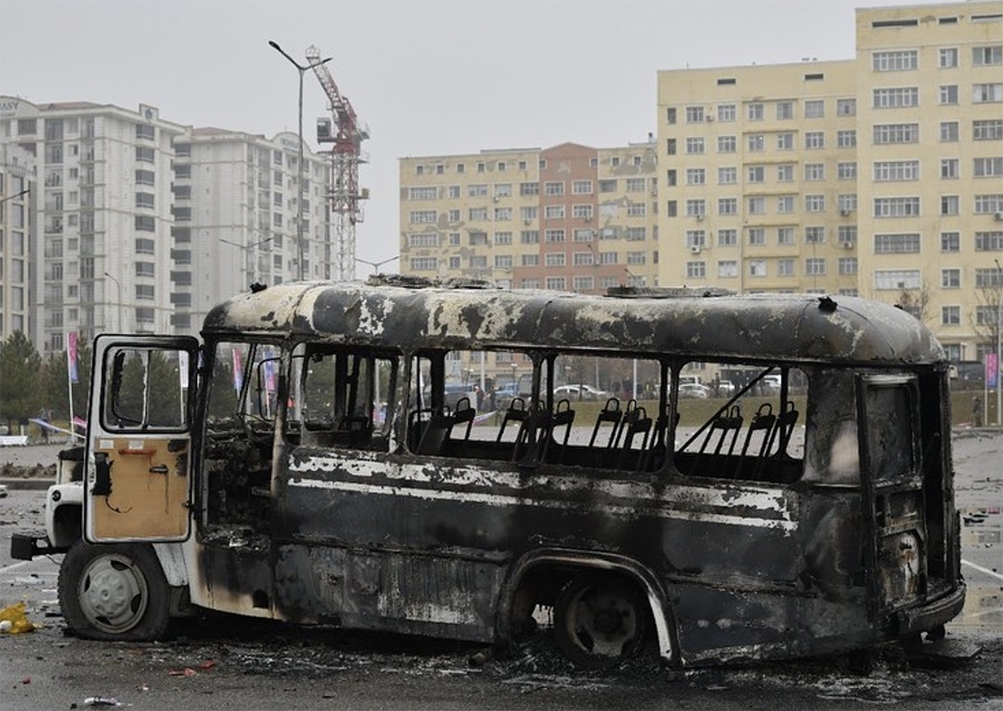 Shymkent’s Alash market on January 4 was abuzz about the protests sweeping Kazakhstan.

Traders had heard that activists downtown were being arrested as they shouted, “Old man, get out” – a reference to former president Nursultan Nazarbayev and his family, who had been plundering the country for decades.

That evening, vegetable merchant Meyrzhan Zaurbekov packed up his stall and headed for the city center, eager to express his concern about falling living standards and rising prices. He expected the rally to be peaceful, joining a few hundred people in front of the Shymkent Plaza shopping center around 8 p.m.

“The crowd was walking toward the akimat [city hall],” Zaurbekov told Eurasianet. “The size of the crowd was increasing so rapidly; in an hour, I wasn’t able to see the back of it.”

Kazakhstan’s third-largest city had never seen anything like it: Thousands of people in Shymkent were demanding a meeting with the mayor.

In the crowd, people implored others to remain peaceful, according to Dilara Isa, a correspondent for Azattyk, the Kazakh service of RFE/RL. She described how one man shouted, “Rising prices irritate people. People live very badly! Why are we here? We want the authorities to know. Let’s not make noise. Let’s not allow hooliganism.” Next a man blamed China.

By 10 or 10:30 p.m., however, people were growing rowdy. Police began using tear gas. Zaurbekov, far from the front, couldn’t make out what was happening, but he decided it was time to go.

Around the same time, Isa of Azattyk said the mood changed suddenly.

Aggressive men, some wearing the short pants and beards that identify them as members of a conservative Islamic group, entered the crowd and began smashing police cars, Isa reported. They also demanded she stop filming.

These men “did not look like the protesters who had peacefully put forward demands during the day, sang the national anthem and asked each other ‘to not succumb to provocations.’ It was like a group of pogromists purposefully came to the square to create chaos,” wrote Isa.

Vandals disabled video cameras that monitor traffic around the city, further muddying the picture. But Isa’s account supports the idea that someone in the elite seized on the unrest using hired thugs. That is the working theory in Almaty, where the worst of the bloodshed unfolded.

Veteran rights activist and political observer Yevgeny Zhovtis has called attention to “Islamists and criminal elements infiltrated by loyalists to local elites,” who he says operate in southern cities like Shymkent and Almaty. These groups escalated “violence against the police, which responded with an iron fist.”

“We don’t know what exactly happened to him that night,” his cousin, Nursultan Sansyzbayev, told Eurasianet. “According to his parents, he went to the protest and never came back. Two days later, he was found in one of the city morgues; a bullet had severed the femoral artery in his leg,” Sansyzbayev said. Doctors told the family that Asylbekov had bled to death.

The central government announced on January 15 that the clashes across Kazakhstan during the first week of January had left 225 dead; most deaths were likely in Almaty. Azattyq has reported at least nine dead in Shymkent

One, Erkhan Kudanbayev, said he had gone looking for a friend late on January 5 and saw police shooting at people outside the Al-Farabi Library a block from city hall.

“I caught a random bullet in my leg, even though I stayed out of the crowd,” Kudanbayev said.

Arman Adilkhanov, another patient, told Orda.kz that he was hosting relatives in his central apartment. When he stepped outside, he was shot by soldiers.

“At around midnight, I went out to get fresh air with my uncle. After a while, a military vehicle stopped at the curb and shot at us. I took two bullets, one in my left leg and the other in my right shoulder,” Adilkhanov told Orda.kz.

Aspanuly also interviewed Bakhitzhan Pozilov, head of the city health department, who said hospitals had received over 120 injured people since January 5. Forty-eight were members of law enforcement. He said 40 patients remained in the hospital, five in intensive care.

On January 7, city officials said they had restored order. Meanwhile, nationwide, security forces have detained around 10,000 people in connection with the unrest; about one-third (3,520) were in Shymkent. The regional chamber of commerce says looters caused local businesses over half a million dollars in damages.

President Kassym-Jomart Tokayev has always insisted that “terrorists” were behind the violence, though he has not yet been more forthcoming with details. On January 7, as he was beginning to regain control with the help of Russian paratroopers, the president doubled down.

“We have had to deal with armed and trained bandits, both local and foreign,” he claimed in a televised address. “Precisely with bandits and terrorists. That is why they have to be eliminated. And that will be done in the near future.”

Tokayev ordered security forces to “shoot to kill without warning.”

In Shymkent, locals like Adilkhanov say the security forces preempted the order, shooting indiscriminately in the streets for two days before the president gave them the okay.