City governments have money to burn and little accountability. 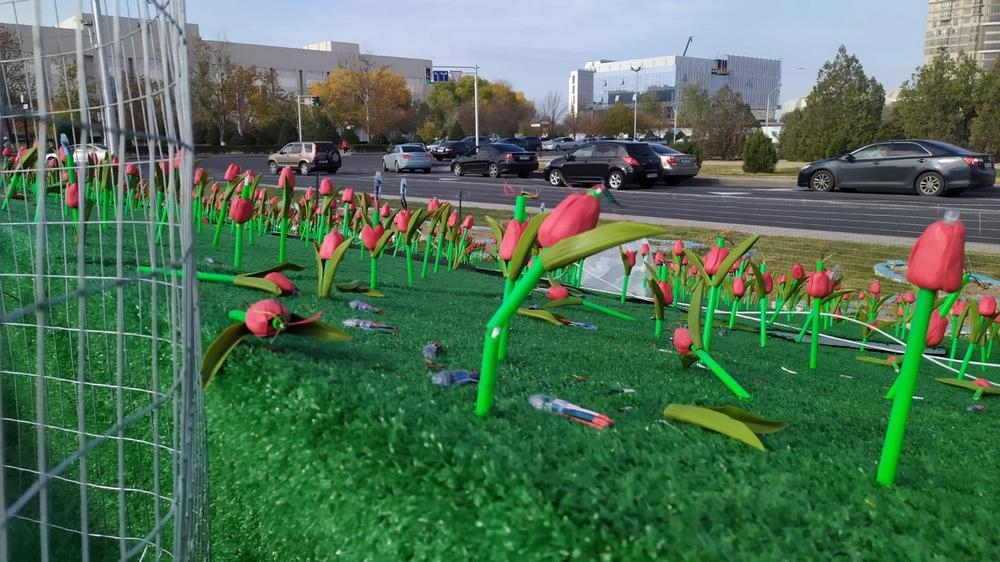 Aktau’s 200-square-meter “Field of Flowers” is just one of many spending scandals involving municipal governments. (lada.kz)

In the grand scheme of misspending in Kazakhstan, the roughly $35,000 that the government of the western city of Aktau splurged on a plastic-flower installation might not seem a lot.

But when the faux tulips started wilting within weeks, and dangerous electrical faults become apparent, it was enough to make locals mad.

“This is sabotage! The people’s money to the wind!” read a typical comment posted underneath an October 24 report on the installation published by Aktau independent news website Lada.kz.

Aktau’s 200-square-meter “Field of Flowers” is just one of many spending scandals involving municipal governments.

By far the most notorious is the Astana Light Rail Transit (LRT), a frozen project whose half-built track has been celebrated as “a monument to corruption” after millions of dollars were siphoned off. The LRT was backed by a Chinese loan, rather than municipal funds, but the capital’s City Hall was involved in the oversight.

In Almaty, Kazakhstan’s largest city, authorities last year spent close to $150,000 on a light show to mark a state holiday. In the end, no one could attend the show, due to coronavirus restrictions, but the contractor, VARDI Aziya, appeared to suggest in its social media posts that the spectacle had gone ahead anyway.

Two popular bloggers who analyzed VARDI Aziya’s video of the show suggested the footage produced was fake. There is no evidence that the funds were ever returned to the state budget and Almaty authorities failed to answer questions sent to them by the bloggers.

The relevant entry on the online portal for state tenders notes that it was “fulfilled.”

Aktau’s City Hall awarded the contract for the flashing tulips installation to a company called Clover Media Group in September. Clover was registered this past March. Since its creation, CMG has won several government contracts in Aktau, tender records show. One of these is for more than $200,000 to embellish “the foyer and winter garden” of a yet-to-be-completed children’s activity center.

While it was the flopping tulips and their shockingly uneven flower bed that gained national media attention, the more pressing concern for many Aktau residents was the fact that the electrical wiring to light up the flowers was not secured.

Unsafe electrical connections have been a talking point in Aktau, part of Kazakhstan’s oil-endowed west, ever since a 14-year-old boy was fatally electrocuted climbing a lamppost earlier this year.

City Hall spent close to $100,000 installing more than 600 of them across the city, Djamilia Marchiyeva, a journalist with the Protenge website revealed, citing state tenders.

That figure did not include the costs for the loudspeakers themselves, which authorities have not disclosed. Several were blown off their lampposts when strong gusts hit. Lada.kz’s questions to City Hall about the tender were simply ignored.

Kazakh President Kassym-Jomart Tokayev appears to recognize the symbolic power of local misappropriation sagas. In February he criticized “the inaccessibility of information on plans and conditions of purchases, the adoption of behind-the-scenes decisions” in state tenders and promised that digitization would set things straight.

Yet critics argue that the problem is less a question of modernization and more about official impunity and unaccountability.

This summer, Kazakhs for the first time voted for executives of village districts and rural towns. In the end, Kazakhstan’s ruling Nur Otan party dominated even these ballots, although some nominal independents competed and won.

In the big cities with big budgets, however, candidates without party affiliations cannot run for council positions. Since registering an opposition party is all but impossible in Kazakhstan these days, that makes spending the preserve of unelected honchos and pro-government city legislatures.