Doctors in Kazakhstan and Kyrgyzstan are growing angry at what they see as little more than a face-saving, statistical trick. 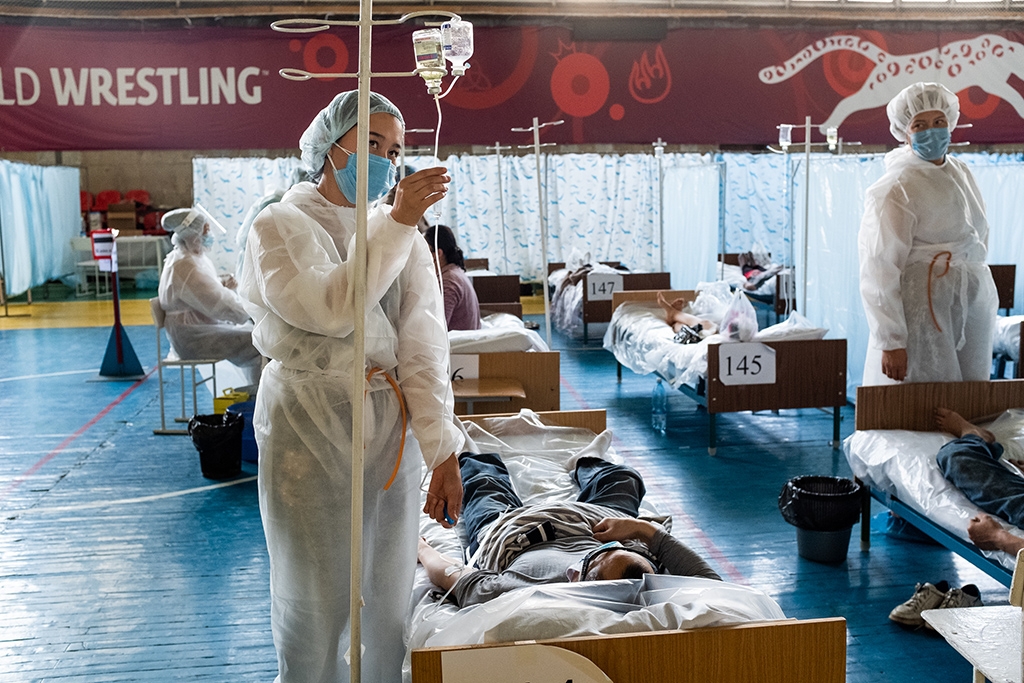 Health systems in Central Asia, most notably those of Kazakhstan and Kyrgyzstan, are creaking under the increasingly unmanageable weight of hospitalizations for pneumonia.

Although it is widely assumed that this surge of cases is attributable to the wildfire spread of the coronavirus, authorities appear reluctant to fully concede the link.

Front-line medical practitioners overwhelmed by patient numbers are less preoccupied by the distinction than the lack of resources and manpower.

Citizens, activists and journalists are alarmed, however, that governments are trying to muddy the picture in order to salvage their reputations. This apparent obfuscation has led in one instance to a distracting diplomatic row.

At a government meeting on July 10, Kazakhstan’s health minister, Alexei Tsoi, stated that around 98,500 pneumonia cases had been recorded since the start of the year. Out of that total, 1,772 cases had led to the patient’s death. More than one-third of the fatalities – 628 – occurred in June, Tsoi said.

The minister had said earlier that the incidence of pneumonia was 50 percent higher this year than in 2019.

And then there is the coronavirus data. As of July 16, Kazakhstan had recorded more than 63,500 cases, of which 375 have led to death.

The degree of overlap remains something of a mystery. Officials have periodically stated that pneumonia patients have returned negative coronavirus tests. But they also admit that many of those negative results may, in fact, be inaccurate.

Pneumonia is an infection inside the tiny air sacs in the lungs that can induce coughing and difficulty breathing; the sacs may fill with fluid. COVID-19 is only one of a number of potential causes for the illness, along with bacteria and fungi. Getting a clear sense of the source of the outbreak helps health systems prepare accordingly and, no less importantly, gives the public a better understanding of the threat facing them.

"In terms of protecting healthcare workers and other patients: That's where it becomes very important to know if someone has COVID or not,” Dr. Alison Lee, a critical care pulmonologist at Mount Sinai Hospital in New York who treated patients during that city’s COVID emergency, told Eurasianet. “Those who do have COVID should be isolated and healthcare providers should be wearing appropriate [personal protective equipment]. From that perspective, it definitely matters.”

The authorities have pledged to work on making their data more useful, but doctors are growing angry at what they see as little more than a face-saving, statistical fudge. In a public outburst unusual for a state employee, Mynzhylky Berdikhodzhayev, the head of the neurosurgery unit at Almaty’s Central Clinical Hospital, angrily demanded in a Facebook post that the government stop “playing games with statistics.”

“These games with [World Health Organization disease classification codes] are leading to postponement of care, hospitalization denials, an increase in mortality and a delay in outpatient care,” Berdikhodzhayev said.

The level of uncertainty around the pneumonia case surge was such that the Chinese Embassy last week took the unusually undiplomatic step of warning of the spread in Kazakhstan of a deadly “unknown pneumonia.” This in turn sparked a brief global ripple of alarm about the emergence of a mystery illness in Central Asia. The Foreign Ministry in Nur-Sultan was still grumbling about the Chinese statement on July 15, even though Kazakh President Kassym-Jomart Tokayev himself has expressed bemused skepticism over pneumonia data.

In the wake of that diplomatic flap, Dr. Michael Ryan, the executive director of the WHO Health Emergencies Program, hinted at the likelihood that Kazakhstan’s testing regime is failing to properly describe the real situation.

“We’re looking at the actual testing and the quality of the testing to make sure that there have not been false negative tests for some of those pneumonias that have provisionally tested negative,” he said. “Many of these pneumonia cases may also be … COVID-19.”

In any event, immaterial of test results, hospitals in Kazakhstan are lumping pneumonia and COVID-19 patients together. If they can get into a hospital, that is.

“All of the people sick with pneumonia, immaterial of whether or not they got a positive or negative COVID-19 test result, are being treated [at our hospital] according to a single protocol developed for coronavirus infections,” Dr. Aigerim Zhakasheva, who works at the admissions ward of the Almaty Railways Hospital, told Eurasianet. “The tests are often returning false negative results.”

Dr. Lee, in New York, said that since there is no effective treatment for COVID-19, emphasis reverts inescapably to supportive care.

“Patients come in and they require oxygen and you monitor their requirements,” she said. “You can try to support them, but there is no cure. On this level, does it matter if you know if they have COVID or not? Quite honestly, probably not.”

This is where scale and manpower come into play. Kyrgyzstan, whose economy is much weaker than that of oil-rich Kazakhstan, is struggling.

Officials there have confirmed almost 12,500 cases of COVID-19 as of July 16. Of that total, 167 have led to fatalities. But, as in Kazakhstan, the pneumonia figures are larger and more worrying.

According to the Health Ministry, 277 people died with pneumonia from January to June, compared with 318 people over the same period in 2019. But things have become much worse since. In the first half of July alone, at least 335 people are said to have died with pneumonia.

In verbal statements, Prime Minister Kubatbek Boronov has not been shy about making a correlation between pneumonia and the coronavirus. But the Health Ministry is still refraining from merging statistics on the two, although it says the possibility is under consideration.

Dastan Bekeshev, a member of parliament, has said he believes that this reluctance stems from government concerns about having to pay out large amounts of money in COVID-19 compensation to medical workers. Only health workers infected with the coronavirus are now eligible to receive such payments.

“Data on the number of people who are sick, dead and have recovered are without a doubt being distorted,” Bekeshev wrote on Twitter. “Judging by the shortage of medicine and the hunt for oxygen concentrators, many are not being counted in the statistics.”

It seems to be the same in Kazakhstan. Privately owned television channel KTK reported on July 15 that the relatives of doctors and nurses who had died recently in the city of Shymkent received 1 million tenge ($2,400) in compensation, which is 10 times less than the amount promised by President Tokayev in March for medics killed by the coronavirus. When KTK contacted the Shymkent city hall, they were told it was because the health workers had died of pneumonia, and not with the coronavirus.

Although the government in Kyrgyzstan has released data on pneumonia fatalities, the overall number of pneumonia patients is not being divulged.

The public grasps at circumstantial clues to guess at the scale of the problem.

City hall in Bishkek, the capital, on July 14 revealed that over the nine days since it had set up drop-in centers for in-person health consultations for anybody possibly suffering from respiratory problems, more than 27,000 people came asking for advice.

A group of Kyrgyz scientists working in collaboration with researchers from the University of Oxford have used a modelling approach to prognosticate a deeply grim prospect. Epidemiologist Aizhan Dooronbekova, a researcher on that project, believes that Kyrgyzstan is looking down the barrel of the “worst-possible scenario.”

“The only thing I can say is that this is only the beginning of the epidemic. The worst is ahead. Our worst scenario for lethal outcomes according to our prognosis is 6,300 deaths,” Dooronbekova said in an interview published by AKIpress. “The situation is spiraling chaotically and because of poor treatment. Nobody is working with the public. I am certain that we should all expect the worst.”