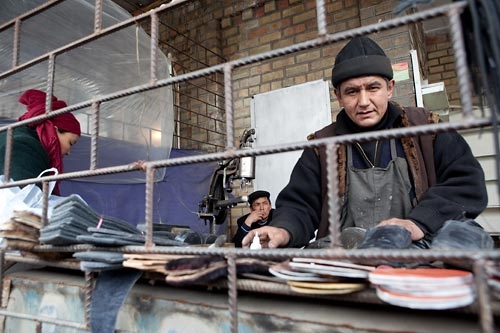 The Ferghana Valley, the fertile heartland of Central Asia, looks like paradise at this time of year. Fat-tailed sheep graze on the slopes, green after the winter snowmelt. Boys on donkeys chivvy cattle alongside blossoming fruit trees, and the urban bazaars have their usual bustling air.

But this calm veneer conceals latent tensions that have been brought to the fore by political violence in Kyrgyzstan that led to the overthrow of the president and caused at least 84 deaths. [For background see the Eurasia Insight archive].

Political tension rose in southern Kyrgyzstan after Bakiyev fled to Jalal-Abad following the collapse of his administration in the capital Bishkek on April 7. For over a week, he held out against Bishkek’s provisional government before finally heading to Kazakhstan. On April 19 he departed Kazakhstan for an unknown destination, the Kazakh Foreign Ministry said. [For background see the Eurasia Insight archive].

Bakiyev left behind an unstable situation, one that features continuing standoffs in Jalal-Abad between his supporters and backers of the provisional government. Local observers believe interest groups are seeking to take advantage of the unsettled situation. "Certain people need this who want to sow the seeds to destroy our stable life," Karamatov suggested.

There was a distinct whiff of ethnic tension in the air after Bakiyev arrived, with ethnic Uzbeks apprehensive of being targeted amid the political tension. "I haven’t been sleeping at night," a woman with a young daughter living outside the town center confided to EurasiaNet.org on April 9.

That tension exploded into the open on April 14 as Uzbek community leaders tried to participate in a kurultai (public gathering) in Jalal-Abad in support of the interim local government, but were denied access amid scuffles and insults. The incident was symptomatic of the way Uzbeks - who form 32 percent of the town’s population - are treated, argues local entrepreneur and philanthropist Kadyrjan Batyrov. "They insulted us," he said with a shrug during an interview at the Batyrov People’s Friendship University, a state of the art institution whose construction he financed. "They insult us every day."

Batyrov is among those accusing Kyrgyz authorities of trying to deny ethnic Uzbeks a voice. "It’s political monopoly," he told EurasiaNet.org. "They adopt laws that are advantageous for them. The rest of the population is discriminated against. Their rights are restricted." Batyrov argues that Uzbeks also face day-to-day discrimination. "You can see it at the bazaar and on the street every day," Batyrov said. "They say: ’Uzbeks, go back to Uzbekistan, these are Kyrgyz lands.’ ? There’s audacious pressure, intimidation of people."

Local authorities acknowledge strained relations, but say that with Bakiyev gone the situation is improving. "When Bakiyev was in Jalal-Abad, that tension was present, but when he left it subsided," Maksat Jenbekov, the town’s acting mayor, told EurasiaNet.org. "It was at the level of rumor - that the Uzbeks would rise up, the Kyrgyz would rise up and they would fight."

The tension in the town was partially caused by a rumor that Uzbeks would come to power in local government, Jenbekov said, adding that - while the views of ethnic minorities must be taken into account - the titular nation should predominate in positions of power: "This is Kyrgyzstan. It should be a Kyrgyz in power."

Some commentators believe this kind of attitude is a source of discrimination against ethnic Uzbeks, who form 14.5 percent of the national population and around a quarter of the population in southern regions.

This is "mono-ethnic rule in a multiethnic state," argues one local journalist - speaking on condition of anonymity - who is based in Osh, another town with a large Uzbek population, situated about 120 kilometers south of Jalal-Abad. The journalist argued that the provisional government risked squandering an important opportunity; minority groups could act as a stabilizing factor in an unstable political environment, the journalist contended.

"Over the last few years the flag of nationalism has been raised," agrees another Osh-based journalist, Javlon Mirzohujayev, director of the independent Mezon TV station. "If previously it was relations in the everyday sphere, during Bakiyev’s time a planned, scheduled system began."

Journalists working for Uzbek-language media complain that broadcasting legislation requiring outlets to disseminate at least half of their programming in Kyrgyz is discriminatory. They say they are filling a niche since the national TV channel broadcasts in Kyrgyz and Russian but not Uzbek, and complain that language laws are too restrictive, inhibiting the use of Uzbek in the public domain.

In the nearby town of Uzgen, Uzbeks do have political representation - the deputy mayor, Mukhamadjon Nosirov, is an ethnic Uzbek who laments any prospect of enmity between two peoples who have "lived together down the ages."

These days Uzgen is a sleepy town, but in 1990 it was the scene of bloody clashes between Kyrgyz and Uzbeks, an event that was one of the early tremors in the break-up of the Soviet Union. The current political pressures reminded people of this, Nosirov said, but ordinary people want no repeat of the violence that left over 200 people dead two decades ago (some sources say up to 1,000 died).

"There was, of course, an apprehension, some fear, because no one has yet forgotten this tragedy of the 1990s," Nosirov told EurasiaNet.org. "Very many people from the Kyrgyz side and the Uzbek side died. But the poor peasants and the ordinary people have never needed this and they don’t need it now."

He dismisses recent tensions in Jalal-Abad as "score settling between the leaders of the two ethnic groups," and echoes Karamatov’s view - and that of many ordinary inhabitants of southern Kyrgyzstan - that power seekers play on ethnic tensions. "They want to make kings out of themselves, at the expense of the blood of others," Nosirov concluded.

He can take heart from the view of one 22-year-old unemployed Jalal-Abad resident, who spoke to EurasiaNet.org on condition of anonymity. "People say that here in Jalal-Abad interethnic strife will erupt," he said. "It’s all a lie... Uzbeks and Kyrgyzs were born here and we won’t allow fighting between them. It’s all a provocation by Bakiyev’s relatives."

Joanna Lillis is a freelance writer who specializes in Central Asian affairs.