On a wide variety of issues, a new IRI poll shows that the optimistic mood engendered by last year’s “Velvet Revolution” is fading. 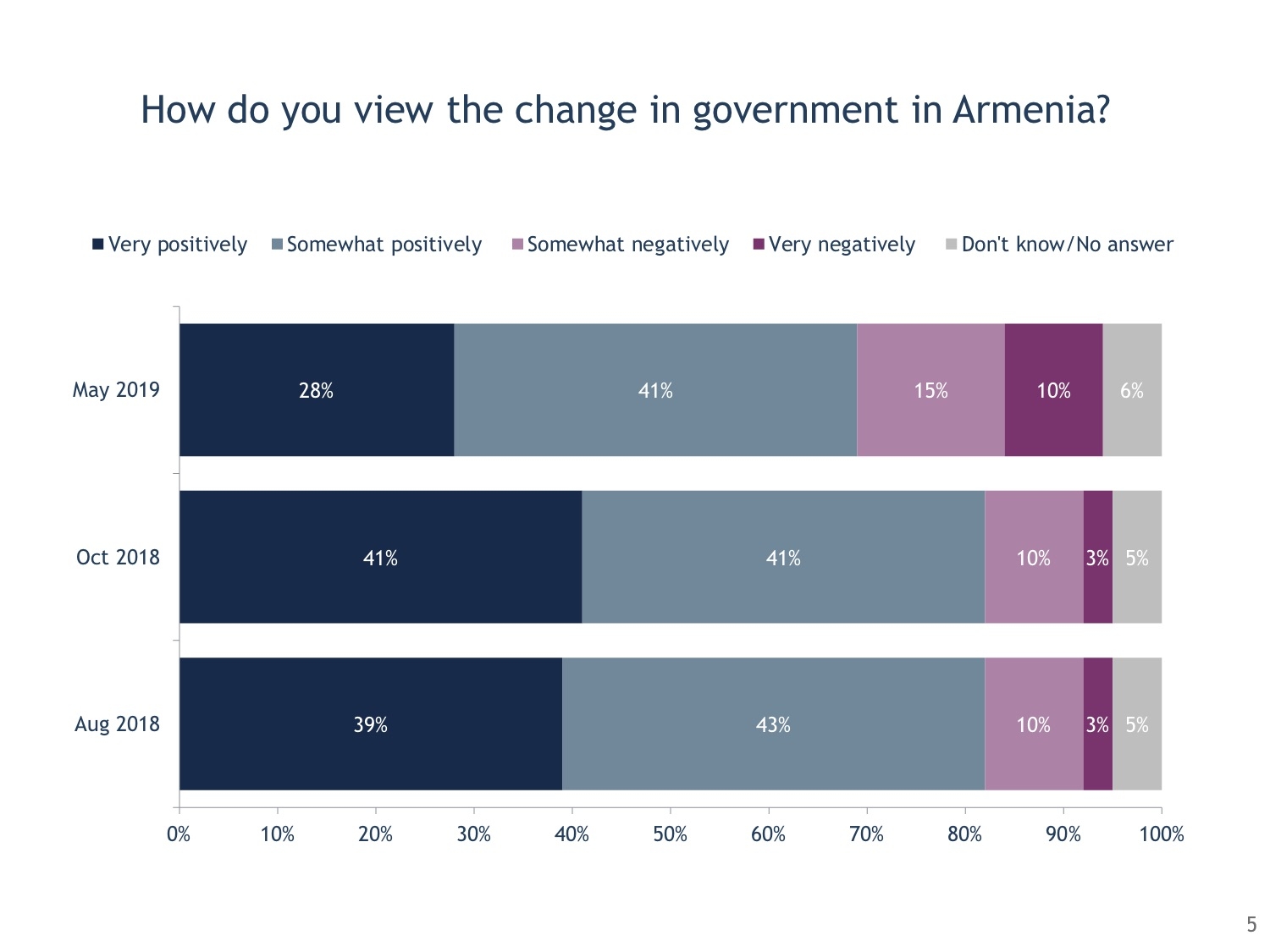 A new poll from the IRI shows a broad decrease in optimism among Armenians. (graphic: IRI)

A new poll shows declining, if still strong, support for the new authorities in Armenia, as well as increasing pessimism over the prospects of a peaceful settlement of the conflict with Azerbaijan.

About 28 percent of Armenians reported viewing last year’s change of government “very positively,” down from a figure of 41 percent in October 2018, according to the poll from the International Republican Institute, conducted in May and released to the public on July 8.

Prime Minister Nikol Pashinyan became wildly popular when he managed to topple the long-hated former government last spring in what he dubbed the “Velvet Revolition,” and his “My Step” alliance won an overwhelming victory in parliamentary elections in December, giving them a five-year mandate to implement the sweeping changes Pashinyan has promised.

“The goodwill expressed by the Armenian people presents the Armenian government with an unprecedented opportunity to undertake fundamental reforms that strengthen the country’s democracy and improve the economic well-being of its people,” said Stephen Nix, IRI Regional Director for Eurasia, presenting the new poll. “The government’s speedy delivery on reforms will be key to maintaining its strong public support and the momentum to press on with its agenda."

The new poll suggests that, across a variety of measures, the optimism engendered by the new government remains relatively high, but down substantially from last year.

The proportion of Armenians who see the country going in the right direction declined to 60 percent from 72 percent in October. The number who saw the country going in the wrong direction nearly doubled, from 11 to 20 percent. Asked about the “prevailing mood of the population,” 29 percent reported that the mood was that the future would “definitely” be better, down from 44 percent in October.

Asked if “people like you can influence decisions” made in Armenia – one of Pashinyan’s signature themes – 20 percent said yes, down from 31 percent in October. Young people, however, were significantly more likely to say that people like them could have influence; 29 percent of those aged 18-29 answered the question positively, compared 14 percent of those 50 or older.

Asked “what the biggest success of the new government” was, by far the most common answer was “reducing corruption,” with 27 percent of respondents naming that. Behind that were more diffuse accomplishments: the “improved psychological state of people,” the “failure of the Republican Party” (the former ruling party), and “brought democracy.”

On the conflict with Azerbaijan over the territory of Nagorno-Karabakh, the number of Armenians who said the conflict could be solved without the use of force significantly declined over the last several months: in October 27 percent said that it “definitely” could be solved, which dropped to 16 percent in the newest poll.

And security issues remained at the top of the list of Armenians’ concerns: asked an open-ended question about what they worry most about for their country, the top three answers were “war,” “the Nagorno-Karabakh conflict,” and “national security issues.”