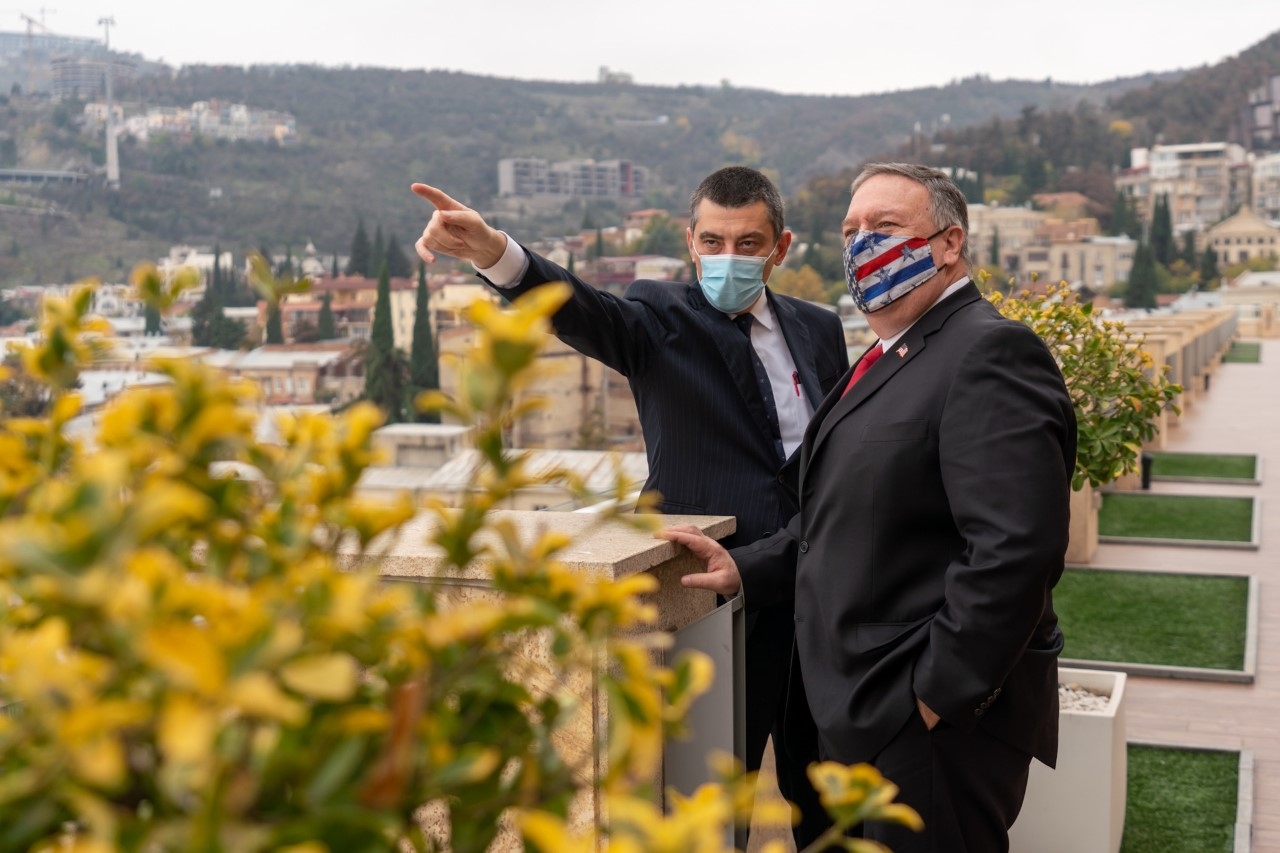 Few countries will offer Mike Pompeo as warm a welcome on his valedictory world tour as Georgia. American flags flew in the capital during the U.S. secretary of state’s overnight visit amid hopes that Pompeo could help solve Georgia’s domestic political gridlock and provide some counterbalance to Russia’s growing clout in the region.

But the irony was not lost on observers. America’s top diplomat has refused to recognize the results of the recent presidential election in his own country. Yet he was in Tbilisi to congratulate the ruling Georgian Dream party on its controversial recent win and to tell the opposition, whom he declined to meet, to recognize the results.

Only Georgian Dream has accepted the October 31 parliamentary election, in which it won a slight majority – enough to form a government and pass most laws. While international observers initially called the election broadly competitive, local watchdogs found flaws in the vote-counting process, including mathematical errors favoring Georgian Dream and problematic hand-written corrections in tabulation records.

Pompeo did not meet with opposition leaders, so they tried to catch the secretary’s attention by lining their supporters on Tbilisi’s central Rustaveli Avenue. “We stand here today to send a message, to make a promise and take responsibility for Georgia’s tomorrow, and this is the message we want Mr. Pompeo to take back home to the U.S.,” said Davit Usupashvili, a member of political party Lelo.

The secretary was scheduled to talk about the recent elections with Georgian Dream leaders. “Secretary Pompeo will discuss efforts to strengthen Georgia’s democratic institutions and emphasize the importance of free and fair elections,” the U.S. Embassy said shortly before he met President Salome Zourabichvili and Prime Minister Giorgi Gakharia.

But Pompeo had no time to honor concerns about the results. As he was winding up his trip on November 18, a senior State Department official advised Georgia’s opposition groups to accept their mandates and enter parliament. The official acknowledged flaws “that unfortunately have plagued Georgia’s elections for 30 years,” but noted that official results closely matched a parallel vote tabulation conducted by local observers.

Watching Georgia’s opposition call for a boycott “is like watching the same movie again,” the official said, according to a State Department transcript. “We’ve encouraging them to go into parliament, do electoral change that’s meaningful so that the next election will be better.”

The visit also highlighted the fading power the U.S. enjoys after four years of Donald Trump.

A week before Pompeo arrived in Tbilisi, Moscow sent troops into Nagorno-Karabakh, the center of fighting between Armenia and Azerbaijan, less than 200 miles from the Georgian capital. A six-week war this autumn altered the region’s map yet again. And once again, Georgia’s adversary Russia played a key role in the outcome.

In this universe of shifting borders, Georgia relies heavily on Washington’s bipartisan backing for its territorial integrity and support in tensions with Moscow. Russia now has troops stationed in all three breakaway regions of the South Caucasus, leaving Tbilisi watching with concern as Moscow clinches its role as the region’s ultimate powerbroker.

“I can’t underscore enough the importance of this visit from our main strategic partner at a time when Georgia and the region face a precarious geopolitical situation,” Georgian Foreign Minister Davit Zalkaliani told journalists at Tbilisi airport, where he greeted his American counterpart. “It is a fact that Georgia is the strongest partner to the U.S., its strongest foothold in the region.”

The Armenian-Azerbaijan war saw not just Russia’s, but also Turkey’s position bolstered in the South Caucasus. These geopolitical oscillations are part of the reason Pompeo came to Georgia, said Giorgi Mchedlishvili, a professor of international relations at Tbilisi’s European University.

“The strengthening of Russia’s foothold in the region at a time when Turkey is turning from a trusted ally into an unpredictable authoritarian power might significantly weaken U.S. influence,” Mchedlishvili told Eurasianet. “Georgia seems to be the only country the U.S. can rely on to reverse this trend.”

While in Tbilisi Pompeo did not publicly discuss the changing geopolitical fault lines, though he reiterated U.S. support for Georgia’s Western integration aspirations and restoration of control over the Russia-backed breakaway territories of Abkhazia and South Ossetia. “I reaffirm unwavering U.S. support for Georgia’s sovereignty in the face of Russian occupation,” he tweeted. Pompeo also issued a written statement calling for peaceful settlement of Armenian-Azerbaijani conflict through international mediation. “[T]he United States remains fully engaged in this effort,” the statement said.

“This means that there will be more of America in Georgia and in the region,” President Zourabichvili concluded, adding that the American presence is “extremely important to us.”