The de facto leadership in Nagorno-Karabakh said that Trump’s decision to recognize the Golan as part of Israel is “a great opportunity for us.” 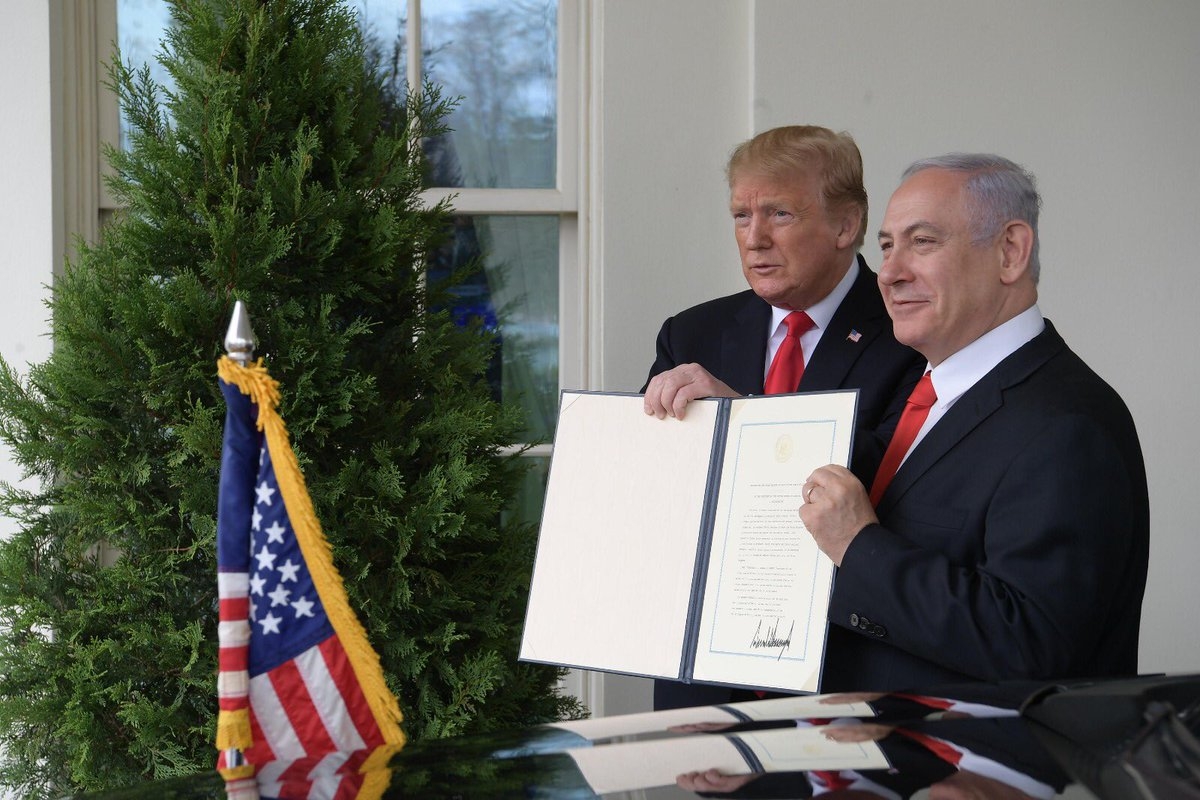 When U.S. President Donald Trump announced that the U.S. would formally recognize the Golan Heights as part of Israel, most of the rest of the world rejected the move. But he found an ally in the de facto leadership of Nagorno-Karabakh.

“Trump’s declaration that the Golan Heights are an integral part of Israel, and [that they] represent a critical component of that country’s security and provide stability in the region, is a very significant and unprecedented announcement,” David Babayan, the spokesman for Karabakh’s de facto president, told the news website news.am. “Particularly in the context of an Azerbaijan-Karabakh resolution…. In this context a great opportunity has emerged for us.”

When disputes about territory and sovereignty erupt around the world, they are usually seen in the South Caucasus – a region abounding in such disputes – through a very local lens.

In the case of the Golan Heights, there are particular resonances with the dispute between Armenians and Azerbaijan. The Golan Heights are internationally recognized (except, now, by the U.S.) as part of Syria, but Israel took control of them in a war in 1967. Occupying a strategic high ground, Israelis see the region as a key element of its security.

The analogues with Karabakh – and particularly the seven surrounding districts that Armenians occupy after winning them in a war that ended in 1994 – are inescapable.

Babayan called particular attention to the importance of the Golan Heights for Israel’s water security. “There is symbolism here throughout,” he said. “Even the announcement was made on the eve of World Water Day, and the Golan Heights is above all a water supply for Israel, the head of Israel’s great biblical river Jordan.”

Babayan added that Trump’s announcement opens the door for Armenians to “even more actively promote the importance of Karvachar as a critical component of the security of Armenia and Artsakh,” he said. Karvachar – known in Azerbaijani as Kelbajar – is one of the seven occupied territories. Artsakh is the Armenian word for Nagorno Karabakh. “After all Karvachar, like the Golan Heights, is a source of water supply … not to use the statement of a great power in this context is simply unacceptable.”

For Azerbaijan, the Golan Heights precedent is an awkward one: Baku makes much of its close relationship with Israel, making it difficult to criticize the annexation. The Azerbaijani government – which has been on Nowruz holiday since Trump made the announcement – has not commented publicly on the U.S.’s announcement.

But in the past, Azerbaijan has supported Syria’s claims over the Golan Heights. “Being deeply worried at the human sufferings in the occupied Golan Heights, I would like to affirm our strong support to the efforts of Syria to recover its full sovereignty over the occupied territories,” Foreign Minister Elmar Mammadyarov said in 2010 at a meeting of the Organization of the Islamic Conference.

One Azerbaijani commentary on Trump’s Golan Heights move, on the pro-government website minval.az, took pains to emphasize the many differences between that situation and that of Karabakh. One key one: while Syria is unable to militarily enforce its claim to Golan, Azerbaijan could do so in Karabakh “at any moment” if it so chose, the author, Tofiq Abbasov, wrote.

For many of the disputed territories in the post-Soviet space, the fact that it is Syria who is suffering from the annexation has significantly complicated the calculations. Syria is Russia’s closest ally in the Middle East and is one of the few states to have formally recognized the independence of Abkhazia and South Ossetia, two breakaway regions of Georgia. Armenia, for its part, has supported the government of Bashar al-Assad in the Syrian civil war and is now providing a small contingent of troops for a Russia-led demining and medical relief mission in Aleppo.

While official Moscow criticized Trump’s declaration, some Russian commenters saw opportunity. The move “opened a new era in international relations, the U.S. has in essence nullified the principle of the inviolability of borders,” wrote the Moscow-based Eurasian People’s Front, in a statement. “The disputed issues in the post-Soviet space should be resolved according to the Golan Heights precedent. Namely, the international community should thus recognize the independence of South Ossetia, Abkhazia, Nagorno-Karabakh, the PMR, DNR, LNR, as well as the inclusion of Crimea into Russia.” (The PMR, DNR, and LNR are the Russia-backed, unrecognized entities controlling Transnistria, Donetsk, and Luhansk, respectively.)