A tight connection to Brooklyn is helping spur a revival. 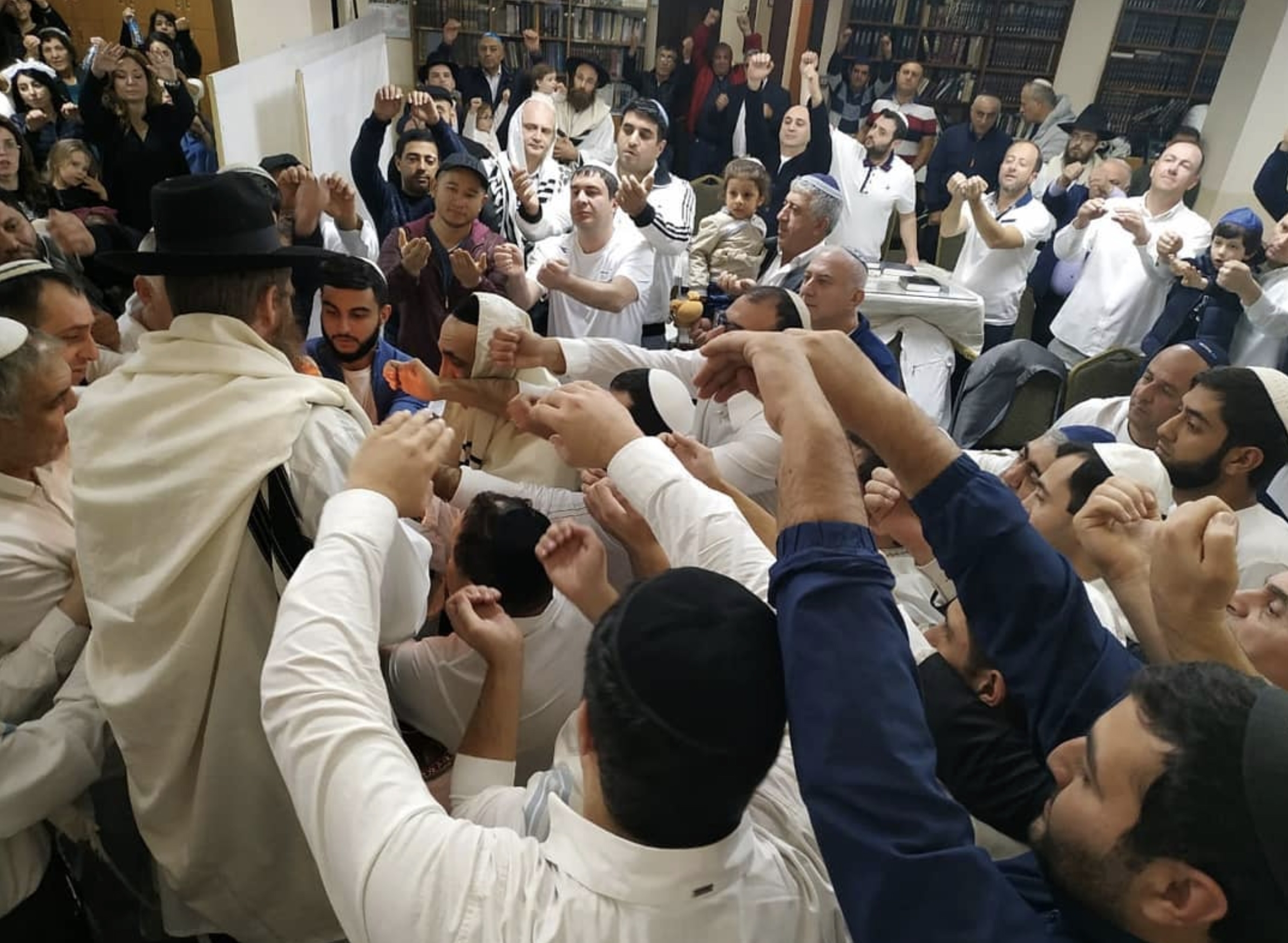 Rabbi Elchanan Cohen, Almaty’s chief rabbi, leading the havdalah ceremony to mark the end of the Sabbath. (all photos: Chabad of Kazakhstan)

The Jewish experience in Eurasia during the post-Soviet era has been largely defined by emigration to Israel. But in Kazakhstan’s case, immigration is helping shape the country’s small, but diverse Jewish community, infusing it with a greater sense of cohesion.

The community’s strong organizational abilities have helped it negotiate a variety of challenges since Kazakhstan gained independence in 1991, including the coronavirus pandemic. As Kazakhstani authorities began lifting a nationwide coronavirus lockdown on May 12, Yeshaya Cohen, Kazakhstan’s chief rabbi, reported that no member of the Jewish community had at that point succumbed to COVID-19.

Solidarity within the community helped minimize the COVID-19 risks: At the first signs of the pandemic, Cohen and other religious leaders implemented preventative measures – using social media to organize volunteers to assist more vulnerable members of the community, ensuring regular food supplies to the elderly and providing other essential services. They also moved religious services and instruction online.

“The community is strong because it is united,” Cohen said.

Cohen, who has served as chief rabbi since 1994, is among the small number of post-Soviet immigrants that now comprise the backbone of Kazakhstan’s Jewish community. All of the rabbis in the country are immigrants, and all are members of the Chabad-Lubavitch movement, a Hasidic sect based in Brooklyn, New York.

Cohen immigrated to Kazakhstan from Israel almost 25 years ago. Other Chabad-Lubavitchers who have moved to Kazakhstan since 1991 have come from Ukraine, Russia, the United States, Canada and Australia.

While most Hasidic sects tend to be insular, Chabad-Lubavitchers are known for their outreach to other Jewish denominations. The movement operates a network of self-sustaining community centers, schools and social outreach programs in over 75 countries, including Kazakhstan. There is also a missionary component: Some Chabad-Lubavitchers, known as emissaries, relocate around the globe to reinforce Jewish communities that, for a variety of reasons, find themselves beleaguered.

Mina Liberow, 30, and her husband, Rabbi Saadia Liberow, moved to Almaty from Brooklyn with their children four years ago. Having grown up in Brazil to parents of Chabad emissaries there, Rabbi Liberow is no stranger to living in a remote location with the goal of building a Jewish community. Rabbi Liberow is certified to slaughter animals in accordance with Jewish law, and his skills were needed in Kazakhstan. Mina Liberow, who was raised in a Chabad family in the Crown Heights neighborhood of Brooklyn, also assists with programming and classes at the Almaty synagogue. “The goal of Chabad is to help Jews all over the world, so we move to countries where there are Jews to provide for them,” she told Eurasianet.

The most reliable estimates peg the number of Jews in Kazakhstan, a country of about 18.5 million, at between 3,000-4,000. Cohen, the chief rabbi, asserted that the community is “growing.” In addition to Almaty, there are congregations in Nur-Sultan, Karagandy, Kostanay, Pavlodar, Oskemen, and Shymkent.

While Chabad-Lubavitchers occupy leadership roles, the community comprises a broad array of Jewish denominations and ethnicities.

Mina Liberow suggested that the COVID-19 pandemic has brought the Jewish community closer together via Zoom and other web-based communications platforms. “We pray all together and the rabbi will speak [online],” she said. “We try to collaborate as much as we can.”

Mordechai Morozow, 28, and his wife, Shoshana, 26, moved to Shymkent from Crown Heights with their three children last August as Chabad emissaries. Mordecai is a rabbi who leads the congregation. Since their arrival, Shoshana said, more Jews have been showing up to services. The Shymkent community, which she estimates at around 100 people, comprises mainly Russian speakers with young families.

Shoshana added that she and her husband did not think twice about relocating to Shymkent, a city in southern Kazakhstan near the Uzbek border. They both knew early on they wanted to be emissaries. “It’s our mission to take care of other Jews and to bring everyone close to Judaism,” she said. “So as a young couple this is what we wanted to do."

The diversity of Kazakhstan’s Jewish community is a result of the region’s traumatic 20th century. Relatively few Jews lived in Kazakhstan prior to the 1930s; most descended from Russian military conscripts who helped conquer the region in the late 19th century. The number began to swell during Stalin’s great terror in the late ‘30s, with thousands of Jews from across the Soviet Union dispatched to labor camps or otherwise exiled to Kazakhstan. Others fled to Central Asia to escape the invading Nazi army during World War II.

Among the deportees of that era was Rabbi Levi Yitzchak Schneerson, a prominent rabbi from the Ukrainian city of Yekaterinoslav, now known as Dnipro. Schneerson was the father of Menachem Mendel Schneerson, the seventh and last Rebbe, or spiritual leader, of the Chabad-Lubavitcher movement.

Levi Yitzchak Schneerson died in Almaty in 1944. Given that many Chabad-Lubavitchers revere his son, the Rebbe, the elder Schneerson’s grave near the Almaty synagogue has become a pilgrimage site.

Liberov served as the de facto leader of Kazakhstan's post-World War II Jewish community in Kazakhstan, as three Almaty congregations were merged into one even though deportations of Jews to Kazakhstan continued in the late 1940s/early ‘50s. Not only did he lead religious services, he was also trained, like his great-grandnephew, as a ritual animal slaughterer. Because the outward practice of religion was largely prohibited under the communist regime, Hillel had to keep traditions alive in the shadows. When Hillel Liberov died in 1982, the Jewish community was left without a leader until 1994, when Rabbi Cohen arrived under the direction of the Chabad-Lubavitcher movement.

In addition to the community organizing efforts of the Chabad-Lubavitchers, Israel provides assistance to help sustain Kazakhstan’s Jewish community. A steady trickle of Kazakhstani Jews is still emigrating to Israel, many of them moving in search of more economic opportunities. But others have carved out business careers in Kazakhstan, effectively serving as a commercial bridge to Israel.

Liat Wexelman, the Israeli ambassador to Kazakhstan, praised in late 2019 the expansion of bilateral trade ties. “Israel is considered the startup nation and has many cutting-edge, state-of-the-art technologies in fields that are top priority for the government of Kazakhstan,” the Jewish News Syndicate quoted Wexelman as saying. “We succeeded in forging some durable partnerships.”

Rabbi Cohen stressed that Kazakhstan’s Jewish community maintains a mutually open and, respectful relationship with the Kazakh government. The government protects, to varying degrees, what authorities deem “traditional” religions, including Sunni Hanafi Islam, Russian Orthodoxy, Roman Catholicism, Lutheranism, and Judaism. But the level of tolerance that Kazakhstani authorities show toward the Jewish community does not extend to all faiths in the country, said Felix Corley, the editor of Forum 18, a news service specializing in coverage of religious freedom.

Corley cited Jehovah’s Witnesses as being among those who do not enjoy classification as being members of a “traditional” religion, and who regularly have experienced troubles with authorities. The group, along with other denominations known to proselytize and seek converts, has been subjected to intensified scrutiny and harassment since the adoption of religious legislation in 2011. According to Jarrod Lopes, a spokesman for Jehovah’s Witnesses world headquarters, there have been 20 incidents in which 37 Witnesses were detained over the past year in Kazakhstan.

Corley explained that Jews are particularly tolerated by Kazakhstani leaders. “While in law, they have no greater rights than anyone else … in practice, they’re generally exempt from state harassment,” Corley said.

Deepening economic and political relations between Kazakhstan and Israel are one factor encouraging governmental tolerance. In addition, Chabad-Lubavitch is an international organization backed by infrastructure and money, so it’s in the government's best interest to work with it, Corley said, noting that the Jewish community in Kazakhstan is not involved in proselytizing.

Jason Morton, policy analyst for the United States Commission on International Religious Freedom, met with Cohen last May. He agrees that it is beneficial for the government to work with the Jewish community, both to boost trade and to bolster Kazakhstan’s international image.

“I think it is significant that Kazakhstan wants to be seen as this religiously pluralistic place,” Morton said. “So, being seen to protect the Jewish community is part of their [the government’s] broader PR campaign for Kazakhstan being this uniquely tolerant place.”