The emotive issue has gotten tangled up in demining, the ongoing search for the bodies of dead soldiers, and other difficult-to-solve problems. 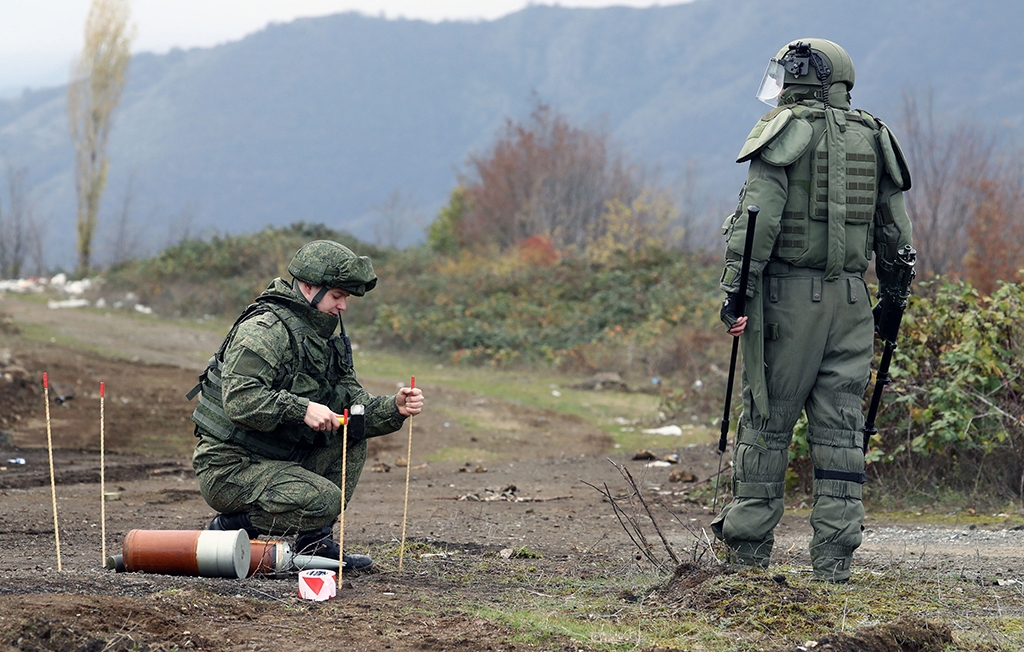 Nearly four months since the end of the war, Armenia and Azerbaijan are increasingly squabbling over the conflict’s nasty unfinished business: prisoners of war, the bodies of soldiers killed in the fighting, leftover land mines.

The issues are all interrelated, and tied in with still other contentious disputes, poisoning relations between the two sides as they are supposed to be building a more sustainable relationship.

The single most vexing issue is that of Armenian prisoners of war still being held by Azerbaijan. It has become a deeply emotive topic in Armenia, inspiring heavy media coverage, social media activism, and pressure on the government. Armenians have widely adopted the hashtag #FreeMaral to call attention to one POW adopted as a cause célèbre, a Lebanese-Armenian civilian Maral Najaryan who was captured in the final days of the war.

Azerbaijan, meanwhile, has been flatly denying that it holds any POWs. At a press conference on February 26 President Ilham Aliyev said that Azerbaijan had returned all the prisoners of war and blamed Armenia for trying to claim that “saboteurs” were POWs.

That referred to the 62 Armenian soldiers that Azerbaijani forces captured in December, a month after the Russia-brokered ceasefire agreement was reached to end the war.

That agreement stipulated that the two sides would return prisoners of war, but Baku argues that since these soldiers were captured on Azerbaijani territory following the formal end of hostilities, they “in no way can be considered prisoners of war,” as foreign ministry spokesperson Leyla Abdullayeva put it this week

Armenian authorities have disputed that logic. A March 1 statement from the de facto foreign ministry of Nagorno-Karabakh accused Azerbaijan of “semantic gymnastics” in declaring those soldiers (it says there are 64) not subject to return, as well as of sidestepping the issue of the many other prisoners that it says Azerbaijan holds.

“Azerbaijan's blatant circumvention of its obligations under international humanitarian law in relation to the captured Armenian military personnel and civilians is not only contrary to the requirements of the Geneva Conventions,” the statement said, “but it renders the Armenians held by Azerbaijan hostages. Indeed, Azerbaijan is detaining such persons for the very purpose of leverage to promote its position in the ongoing implementation of its strategic objectives against the Republic of Artsakh [as Armenians call Nagorno-Karabakh] and the Republic of Armenia.”

Armenia has not officially said how many prisoners it believes Azerbaijan holds, but Armenian human rights advocates counted roughly 200 as of early January. There are occasional exchanges of small numbers of prisoners: the last was on February 10, when Azerbaijan returned five Armenian prisoners and Armenia, one Azerbaijani. (Azerbaijan has been far quieter about its own prisoners held by Armenia, but based on open source reports those appear to be many fewer in number.)

At a March 5 briefing, Russian MFA spokesperson Maria Zakharova said that so far, under Russian mediation, 63 Armenians and 16 Azerbaijanis have been returned, and that Russia didn’t know how many remained on either side.

Armenia has stepped up its efforts in trying to raise these issues internationally, though it’s had little success so far other than among the usual pro-Armenia figures in the United States and Europe. U.S. Senator Robert Menendez, a longtime ally of Armenian-American lobby groups and the chairman of the Senate Foreign Relations Committee, said this week that with a transition in the White House the administration may be willing to take a harder line on Azerbaijan’s intransigence on the POWs. “It’s a violation of international law, we need to speak out, which the previous administration did not,” he said.

Russia, the only third party wielding significant authority on both sides, has been insisting the two sides exchange prisoners on an “all-for-all” basis, that all should be exchanged regardless of the details. This, incidentally, is the same position it held before the war, when the number of detainees on each side was far smaller but when the Armenian and Azerbaijani arguments were, to a degree, reversed. Then it was Armenia refusing to return some of the detainees it held because they had committed crimes against Armenians.

In any case, the POW issue is now tangled up with several other contentious topics which are either festering or continuing to worsen.

One of those issues: Azerbaijanis’ temporary refusal, apparently without any explanation, to allow joint work to recover bodies from the parts of the battlefield now under their control. As of February 13, the Karabakh authorities had reported recovering the remains of 1,374 soldiers. But the authorities in Karabakh said that the Azerbaijanis had halted their cooperation on February 15. On March 2 – also apparently with no explanation – the work resumed.

Azerbaijan, meanwhile, has been going on the counteroffensive in the information war by airing its own grievances with Armenia’s performance of its post-war obligations.

Azerbaijani officials seized on media reports in Armenia that the authorities there continue to “secretly” send troops to Karabakh, sparking protests among some parents. The Ministry of Foreign Affairs accused Armenia of “secretly and forcibly” sending troops to Karabakh against their will, thus violating the terms of the November 10 Russia-brokered ceasefire statement. “Exactly this sort of illegal deployment of Armenian armed forces to Azerbaijan at the end of November took place after the entry into force of the trilateral ceasefire statement led to tension in the region,” the MFA said, referring to the 62 captured soldiers.

The agreement is a bit vague on this issue. The fourth point stipulates that: “The peacekeeping contingent of the Russian Federation shall be deployed in parallel with the withdrawal of the Armenian armed forces from Nagorno-Karabakh.” Does that “withdrawal” refer to the defense forces of the de facto Karabakh government, or of Armenia (which, in any case, are deeply interwoven with one another)? And when are they supposed to withdraw? Many Azerbaijanis have interpreted it as “as soon as the Russian peacekeepers arrived,” while Armenians are in no mood to completely entrust their security to the Russians.

Azerbaijan also has been accusing Armenia of refusing to hand over data about where it had placed land mines during the war. The territory that Azerbaijan retook during the fighting now appears to be widely littered with mines, regularly killing or injuring Azerbaijanis who venture in.

“We have given them POWs, we have given them the bodies of those killed,” Aliyev said in his press conference. “After the war more than a thousand fallen Armenian soldiers were found with representatives of the Armenian side, the peacekeeping mission and our representatives in the liberated territories and handed over to the Armenian side. […] But to not give us the maps of the minefields means intentionally dooming civilians and soldiers to death and maiming.”

A vivid dispatch from the BBC Russian service published this week included one anonymous Russian peacekeeper’s take on the situation. And it suggested that real cooperation may be easier to find on the ground than between the leaders.

“Working with the Red Cross to find the bodies of the killed soldiers – the most terrible thing I have seen here,” the peacekeeper said. “We went to the mine fields and saw corpses that had already started to be torn apart by jackals. I remember coming to work in Shusha and the road was just full of corpses. Young Armenian guys, 18-19 years old. It was horrible.”

“You have to give credit to the Azerbaijani soldiers,” he continued. “I saw with my own eye that they covered up the bodies when they took new positions, saved the bodies from the jackals that way. Where they couldn’t even manage to throw on a little dirt, we find only fragments and individual bones.”