The missiles didn’t explode and were out of date, Armenia’s prime minister complained. Some Russians saw those as fighting words. But Russia is still looking to expand its military activities in Armenia. Our weekly column. 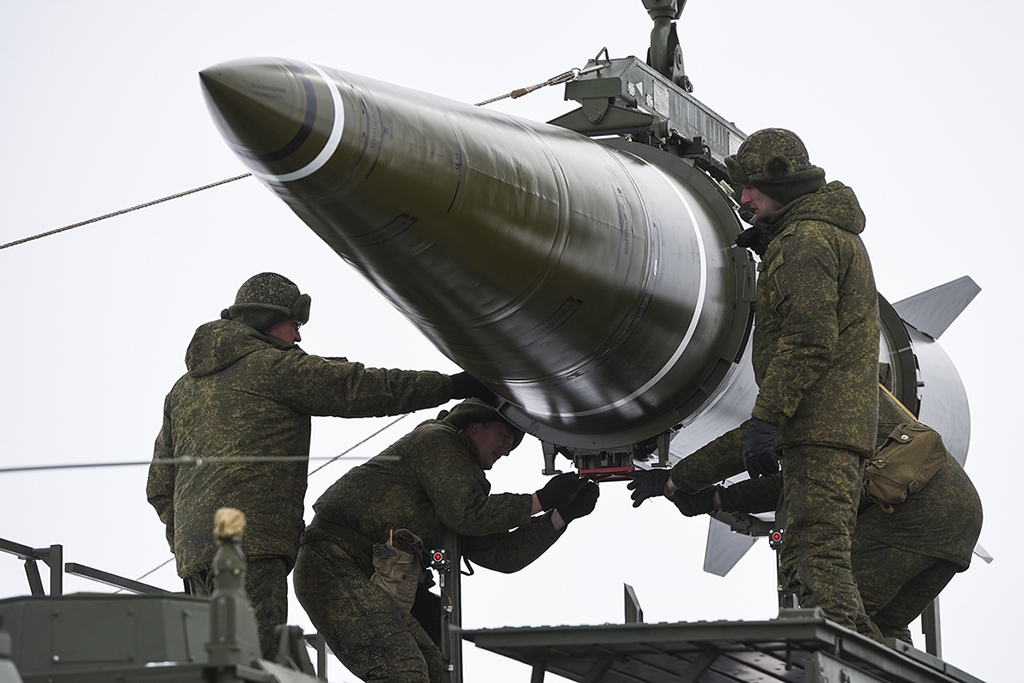 An Iskander missile in Russia in 2018. (Russian Defense Ministry)

Some intemperate remarks about Russian weaponry from Armenian Prime Minister Nikol Pashinyan led the country to the precipice of a military coup this week, and the political crisis loomed large over the entire post-war recovery.

In a February 23 interview with local television, Pashinyan said that the Iskander missiles in Armenia’s armory – the most sophisticated weapons it possesses – were effectively duds. The Iskanders launched during the war, he said, “didn’t explode, or maybe 10 percent of them exploded.” The interviewer pressed him, asking if that was really true, and Pashinyan cryptically responded “I don’t know. … maybe they were weapons from the ‘80s.”

All of that was in response to an interview the week before of Pashinyan’s predecessor, Serzh Sargsyan, whom he ousted in the 2018 Velvet Revolution. The ex-president criticized Pashinyan for not using the Iskander missiles until the war was virtually lost; the interviewer was asking Pashinyan to respond to that statement.

Also, as it happens, Sargsyan was notorious for arguing following the last big conflict with Azerbaijan, 2016’s April War, that the Armenian armed forces were fighting with “weapons from the ‘80s.” Sargsyan was heavily criticized for the statement and Pashinyan, in January 2020, pointed to several new Russian weapons acquisitions and bragged that “the shameful chapter of weapons from the ‘80s is over.”

The Iskander is not from the ‘80s. It is Russia’s most advanced ballistic system, and when Armenia acquired it in 2016 it was seen as a gamechanger in its arms race with Azerbaijan. It gave Armenia, for the first time, the ability to strike Baku and the strategic oil and gas infrastructure there. Armenia is the only state other than Russia to own it.

In Russia – where arms exports are a serious business, and Russian weaponry a matter of state prestige – Pashinyan’s insult was a bigger misfire than even the Armenian Iskanders allegedly were.

The deputy head of the State Duma defense committee, Viktor Zavarzin, said that Pashinyan’s statement was an “absolute lie” and said that he was only trying to deflect blame from his own failures. The newspaper Komsomolskaya Pravda, in a story headlined “Don’t mock our Iskanders, Mr. Pashinyan,” interviewed a senior Russian missile engineer.

“If he claims that the Russian Iskanders were ineffective, Pashinyan needs to watch his mouth,” the engineer, Vladimir Kovalev, told the newspaper. “To make such serious claims against the rocket complex and then publicly admit that he ‘doesn’t know’ the issue – it’s unworthy and even dishonorable for the prime minister of Armenia. And his claim about ‘weapons from the 80s’ is a sign of the ignorance of a dilettante. What kind of ‘weapons from the 80s’ can we be talking about if the Russian army only finished equipping itself with Iskanders at the end of 2019? And Armenia even got some of these complexes before we did, as allies.”

The Russian Ministry of Defense even denied that the Iskanders were used at all during the war, though there is plenty of evidence that they were.

American military analyst Rob Lee, who has closely followed the conflict, said there was some merit to the criticism of Armenia’s use of the Iskanders. “The big question is why they didn’t use it earlier in the conflict,” he told Eurasianet. One obvious potential target: the bases of the Turkish Bayraktar drones which the Azerbaijani forces used to such success. “Waiting to use it on Shusha was a last-ditch effort, but it was a waste to use such a long-range system on a close target. So I think that’s why Pashinyan tried to deflect by saying they weren’t effective, to deflect blame for why he didn’t use them properly.”

In any case, it was an extraordinary own goal, given the deep dependence on Russia in which Armenia now finds itself. “Such a public stab in the back of Russia, when Armenia’s security completely depends on Russia, is baffling,” wrote analyst Hrant Mikaelian. The deputy chief of staff of the armed forces mocked Pashinyan in his own interview, was fired for it the same day, and that firing became the immediate justification for the armed forces to issue their extraordinary call for Pashinyan to step down.

Ironically, given their role in the current crisis, Armenia originally seems to have acquired the Iskanders as a Russian concession during another period of political turmoil. News about the deal first leaked during the 2015 Electric Yerevan protests, now seen as a sort of precursor to Pashinyan’s Velvet Revolution two years later.

Those protests erupted in response to a price hike by Armenia’s Russian-owned electricity company, and had taken on an anti-Russian flavor. Russia, in an attempt to prop up the government then in power, offered Yerevan a number of concessions to tamp down public anger, among which may have been the Iskanders. The organizers of the protests at least saw it that way: One of them called the acquisition of the missiles “a credit to the people” of Armenia. It’s the kind of language Pashinyan himself would like.

Fists of love and hate

Amid the crisis Pashinyan got support, of a sort, from an unlikely source: Azerbaijan President Ilham Aliyev. Following the military officers’ call on Pashinyan to step down, Aliyev warned against “revanchist thoughts” from Yerevan and said that Azerbaijan had a “ready fist” lest they emerge again. It’s not clear exactly what he was referring to, but the opposition parties that have aligned against Pashinyan have been regularly criticizing the ceasefire agreement currently in place, and have suggested that they would try to amend it in Armenia’s favor.

Pashinyan also seemed to still have the backing of the Kremlin, at least officially, in spite of the perceived insult to the Iskanders. President Vladimir Putin spoke with Pashinyan by phone late on February 25 and, in the Kremlin’s telling, expressed his support for “resolving the conflict within the framework of the law.” And Pashinyan has all the legal levers to stay in power as long as he wants.

Meanwhile, Russian support for Armenia’s post-war recovery is continuing apace. Earlier in the week, Armenia’s defense minister said that the Russian military base in Armenia is set to expand and to deploy some of its soldiers closer to the border with Azerbaijan. In an interview with RIA Novosti, Defense Minister Vagarshak Harutyunyan was asked about the possibility of setting up a second Russian base in the country, and he said there was no need but that “it’s more accurate to talk about the possibility of relocating some formations from the Russian base (taking into account its expansion) toward eastern Armenia, and the corresponding work on this issue is already being done.”

The base, in Gyumri near the border with Turkey, currently hosts about 5,000 Russian troops, both land and air forces. Harutyunyan didn’t elaborate on the nature of the expansion or where the soldiers might be relocated. He did add that his ministry was carrying out unspecified “defense reforms” and that Russian specialists were aiding in the process.

This statement also got a separate angry reaction from Aliyev.

“Several days ago I heard that now its allies want to rebuild the Armenian army, modernize it,” Aliyev said on February 25, without explicitly mentioning Russia. “Why? Against whom? The war is over. If someone wants to live with revanchist ideas, he will see this fist, it is ready, and let them try our patience.” (Revanchism and fists are at the front of his mind these days, it seems.)

He went on: “Such a fascist state should not have an army. We will never allow any kind of danger to us or for our citizens, who will return to their liberated lands, to feel any sort of risk. Immediately after the July clashes […] Armenia was daily supplied with several planeloads of free weapons. Did Armenia buy these ‘Iskanders’ for money? No, they got them free.”

To unpack that a bit: The planeloads of weapons refers to another recent episode for which Aliyev strongly criticized Russia, when reports emerged last summer about large-scale Russian weapons supplies to Armenia. And details of the arms transactions between Armenia and Russia are never made public, but it appears that the Iskanders were acquired under a Russian loan to Armenia and likely at preferential prices, as Russia sells its allies in the Collective Security Treaty Organization weapons at cost.

In any case, it was quite a broadside by Aliyev, who has (subtly) been criticizing Russian cooperation with the Armenian de facto authorities in Nagorno-Karabakh, but not Russia’s support for Armenia itself to nearly this extent. It remains to be seen if he thinks that Azerbaijan also doesn’t need an army now that the war is over.

All quiet on the eastern front

Speaking of intimidated citizens, Armenians living in regions that are in newly close contact with Azerbaijani military positions have been reporting gunfire and other threatening behavior from their new neighbors. While this was the big story in the region last week, it’s worth noting that there have been no similar reports over the past week. Whether that’s because the Azerbaijanis changed their behavior (Russian peacekeepers were reportedly trying to tamp it down) or because the Armenian authorities succeeded in their efforts to suppress news from the region, is not clear. But the Ministry of Defense has been regularly reporting “no border incidents” and Armenia’s ombudsman, who has been one of the most prominent voices calling attention to the situation, has been silent on it.

In spite of all the action in Yerevan and in the media, the situation in the conflict zone itself appeared fairly quiet, perhaps in part because of the heavy snow that blanketed the region.

Azerbaijan did continue to roll out plans for reconstruction. It reported that the road it is building to Shusha will be open to the public starting in August, because demining work has to take place before that happens. That is just a temporary road anyway, and a bigger one will be built by two Turkish companies.

Aliyev also expanded on plans to build airports in the retaken territories, and they are ambitious. An international airport is being built in Fizuli, a “first-order priority.” The runway will be able to handle “all types of planes, including the heaviest and bulkiest,” Aliyev said, and construction should be completed this year, depending on how the demining goes. The airport should enter full use in fall 2021, he said.

Two other airports are being constructed in the Lachin and Zangilan regions, and the latter will be a “logistical center” tied to the new corridor that is supposed to lead from that region, across southern Armenia and into Azerbaijan’s exclave of Nakhchivan.

This report was updated on February 26.