Karabakh considers making Russian an official language, more restrictions on journalists, and Azerbaijan cracks down on illegal – and dangerous – visits to its newly retaken territories. Welcome to our new weekly column on the aftermath of the 2020 war. 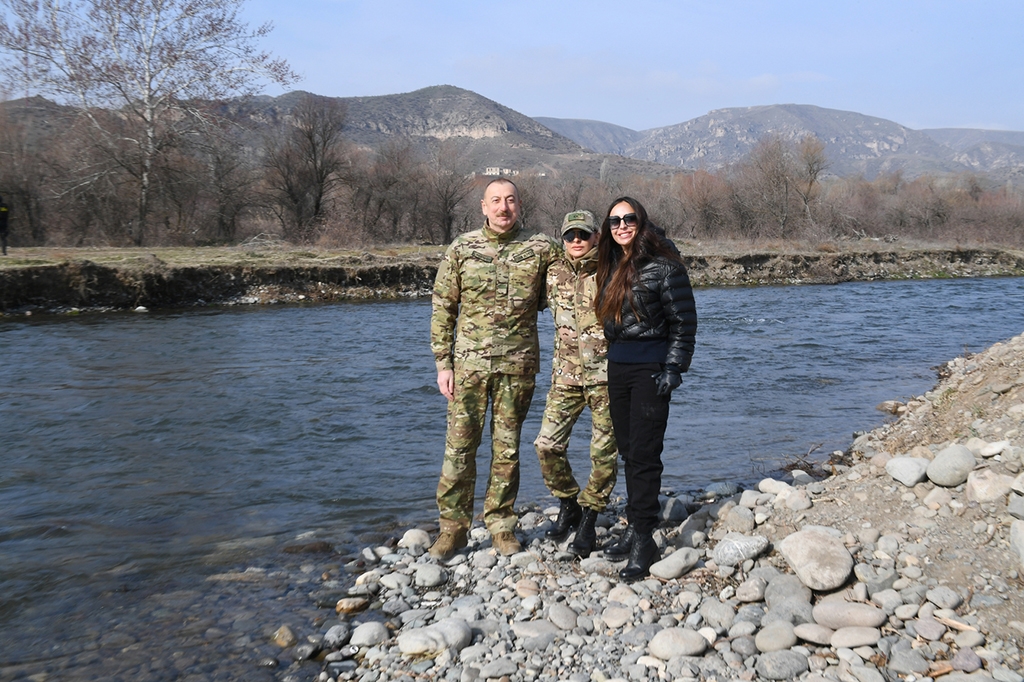 The Aliyev family toured some of the rewon territories over Valentine's Day weekend. (government handout)

The ongoing Russification of Nagorno-Karabakh took another step this week as the territory moves to make Russian an official language, alongside Armenian.

The legislation, introduced on February 16, stipulates that all business in de facto state structures is to be done in Russian “when required.” The rollout of the language law followed news from the previous week that Russian peacekeepers, who are monitoring the ceasefire following last fall’s war, now effectively get a veto over permits for non-Armenian citizens to visit Karabakh.

“The long-term presence of Russian peacekeepers in Karabakh and a recognition of the need for joint solutions to the many social and communication problems … require a reassessment of the role of the Russian language,” the bill’s authors wrote. It has already been signed by the territory’s de facto president, Arayik Harutyunyan.

Whether as a result of Russian influence or not, entry procedures into Karabakh have become much more difficult in recent days, in particular for non-Armenians, according to reports from several who have tried. According to an account in RFE/RL, one Russian peacekeeper on the road to Karabakh even told an Armenian fixer working with foreign journalists that the foreigners needed permission from Azerbaijan before they could enter, though with the caveat that the soldier may have been misinformed. A spokesperson for the de facto Karabakh foreign ministry said the difficulties with entry were “temporary inconveniences” and were being worked through.

Journalists also have faced more difficulties in reporting from southern Armenia’s Syunik region, which has become one of the tensest areas in the country. Following the handover of the bordering Lachin province of Azerbaijan back to Azerbaijani control following the war, some residents of Syunik have found themselves displaced from land they had been living on for decades, benefiting from the Armenian occupation of Lachin and fuzzy ex-Soviet border demarcations. Many more residents have been intimidated by the newly close proximity of Azerbaijani soldiers, who have been making their presence felt by erecting new signs along the border.

Armenian journalists have been producing a steady stream of reports about the new, uncertain situation in the region and the government apparently has had enough. The National Security Service now requires journalists to get a special permit to visit the area, and the head of the Journalists Union of Armenia said it was because the government didn’t like the reports that local media were producing.

The hottest topic that has emerged recently from the area is that of regular gunfire from the newly established Azerbaijani military posts along the border. Armenia’s human rights ombudsman has been issuing frequent reports documenting the firing, but government officials – under (metaphorical) fire for the shaky security situation in the area – have been trying to play down the danger and chalking up the alarming reports to scaremongering.

“Locals aren’t scared,” said Robert Ghukhasyan, an adviser to Armenian Prime Minister Nikol Pashinyan, in an interview with Civilnet from Syunik. “In general, the people who are afraid have no connection to this territory.” The government has been emphasizing the positive, highlighting a program to build new houses for Armenians whose former homes turned out to be on what now appears to be Azerbaijani territory.

Amid this apparent disagreement, the ombudsman issued a curious parsing of the precise nature of the gunfire. In a February 19 statement, the ombudsman’s office noted that there have been some claims that the Azerbaijani gunfire is “irregular” and thus not an issue of serious concern. “How do we determine what constitutes irregular shootings by Azerbaijanis, and how do they differ from regular shootings? For example, are five shots in 10 minutes to be considered irregular shootings, but 10 shots in five minutes ought to be considered regular shootings?” It continued these musings on the intention of the shooting: “How will the villager decide which shot the Azerbaijani armed serviceman fires is in the direction of the village? If the villager assumes that the shot was fired in the air, then what? Can he then be expected to remain calm? What does it matter if the shot was fired in the air or in the direction of the village?” His conclusion: “even a single shot” is cause for alarm, as it’s intended to intimidate Armenians.

The ombudsman, a holdover for the former Armenian regime, certainly has an interest in ginning up the danger, as this has been one of the main talking points that the newly revived old guard has been using in its quest to oust Pashinyan. But the Russian peacekeepers do appear to be taking the incidents seriously: They have set up new observation posts in response to the shootings, local authorities reported. And in another CivilNet report from the area, the journalists heard shots fired in the distance. “The Russians will get unsettled now,” a local Armenian soldier told them. “They want to know who did it. They don’t allow a single shot to be fired. Even firing drills are not allowed.”

On the other side of the line, the Azerbaijani government has the opposite worry: that its citizens aren’t scared enough of the former conflict zone. Unknown numbers of Azerbaijanis, mostly people from the formerly occupied territories seeking to visit their former homes, have been wounded or killed by uncleared land mines when they venture in to the area. The most recent was a man who died in Talysh on February 19 after stepping out of his car on to a mine. The day before, another man died from a mine explosion in neighboring Sugovushan (recently renamed from the Armenian Mataghis) on February 18. Police announced that they had detained six people for illegally visiting the newly retaken territories, and splashed their mug shots all over the media. “We once again call on citizens to not visit the liberated territories illegally, risking their life and health,” the Interior Ministry said in a statement.

It's anyone’s guess when the newly rewon territories will be safe to visit, let alone viable to move back to, but the Azerbaijani government continues to roll out ambitious reconstruction plans. Over Valentine’s Day weekend President Ilham Aliyev and his wife took a tour of some of the territories, something that has become a regular practice, and at one stop he formally laid the foundation for a new rail line through the southern edge of those territories along the border with Iran. The new 100-kilometer line will be part of a new rail corridor that eventually should hook up with a rail line across Armenia’s southern border into Nakhchivan and then onward to Turkey. It stands to revolutionize the region’s communications.

But in his speech outlining these new prospects, Aliyev seemed to get distracted from the bright future and pivoted to a long digression about his domestic political foes and their predecessors in the 1990s. “I want to say this to the Azerbaijani people again so that no one forgets. The despicable PFPA-Musavat tandem sold these lands to the enemy in order to come to power,” Aliyev said, referring to two of the country’s main opposition parties; the Popular Front Party of Azerbaijan (PFPA) was in power in the early 1990s when Azerbaijan lost the first war with Armenia. “The people of Azerbaijan should never forget that; never forget these traitors and enemies! They sold our lands.”

Railing against the old regime and its incompetence in the war was a staple of pre-war discourse. Aliyev would seem to no longer need scapegoats – he won the war, and by all accounts has secured his political future for as long as he wants one. But old grudges die hard.

In any case, the political recriminations in Azerbaijan are nothing compared to what is going on in Armenia, and this week the Armenian media was deeply consumed with a lengthy interview that former President Serzh Sargsyan gave to the TV network ArmNews. There wasn’t much new in the interview, but Sargsyan’s lengthy self-justification that the country was in better hands under his rule only fueled the second-guessing that has consumed Armenia since its defeat in November. It also fed the cynicism of many Armenians about the direction of their country.

“If Sargsyan ruled the country normally, people like Pashinyan would not have come to power,” one social media user wrote. “We need a new prime minister – and he should not be from Armenia.”