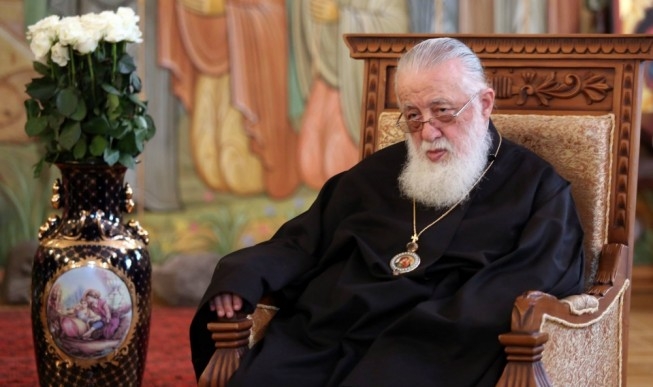 The arrest of a senior Georgian Orthodox priest accused of plotting to poison an unnamed high level church official has roiled the country, where the church plays an outsized role in politics and society.

The priest in question, Giorgi Mamaladze, was arrested on February 10 moments before boarding a flight to Germany, where the ailing, 84-year-old Georgian Orthodox Patriarch Ilia II is recovering from a bladder procedure -- leading to rampant speculation that the patriarch was the would-be assassin's intended target. According to a statement from Georgia’s Office of the State Prosecutor, Mamaladze was caught with cyanide in his baggage:

The investigation began on February 2, based on information from a citizen who informed the prosecutor's office that his acquaintance Giorgi Mamaladze had asked for the lethal poison cyanide because he wanted to murder a cleric at the highest level of the hierarchy.

While the Prosecutor's Office did not specifically claim that Father Mamaladze's target was the country's widely beloved patriarch, other elements of the government were less coy. Georgian Prime Minister Giorgi Kvirikashvili said the country had averted a "major disaster" and that he had taken personal control of the case, including dispatching members of his official security detail to protect the patriarch.

Adding to the intrigue, the opposition Rustavi2 news channel released a letter reportedly written by Father Mamaladze only months ago, which appears to describe evidence of mismanagement and corruption within the Patriarchate’s Property Management Service, where Mamaladze is a senior administrator. While the authenticity of the letter has yet to be confirmed, it paints the contours of a conspiracy within the church to frame and defame Mamaladze for asking too many questions. Meanwhile, the accused cleric’s attorney, Giorgi Phantsulia, publicly complained about state prosecution rules that apparently forbid him from offering his client’s side of the story.

Speculation about an assassination plot against the Patriarch raises the fraught question of his succession. While the Georgian Orthodox Church is typically regarded as a conservative, if not reactionary, force in Georgian society, the church under Ilia II has also been at least nominally supportive of the country’s Western orientation. However, the church is reportedly broadly divided between competing factions including those that favor much more robust relations with Russia, those supportive of the status quo, and some groups backing a more Western-facing agenda. By some accounts, pro-Russia forces within the church are well positioned to succeed Ilia II, which would certainly complicate -- if not thwart -- the government’s stalwart Euro-Atlantic embrace.

Meanwhile, the Russian Orthodox Church reacted to recent events the same way as many observers in both Georgia and abroad, calling the news “strange.”

It remains to be seen how this new episode will play out for Georgia. Speaking to the media, one senior bishop refused to comment in detail on the accusations, claiming only that if something is amiss, it is certainly not being carried out alone.