Azerbaijan appears even less worried than usual about international criticism. 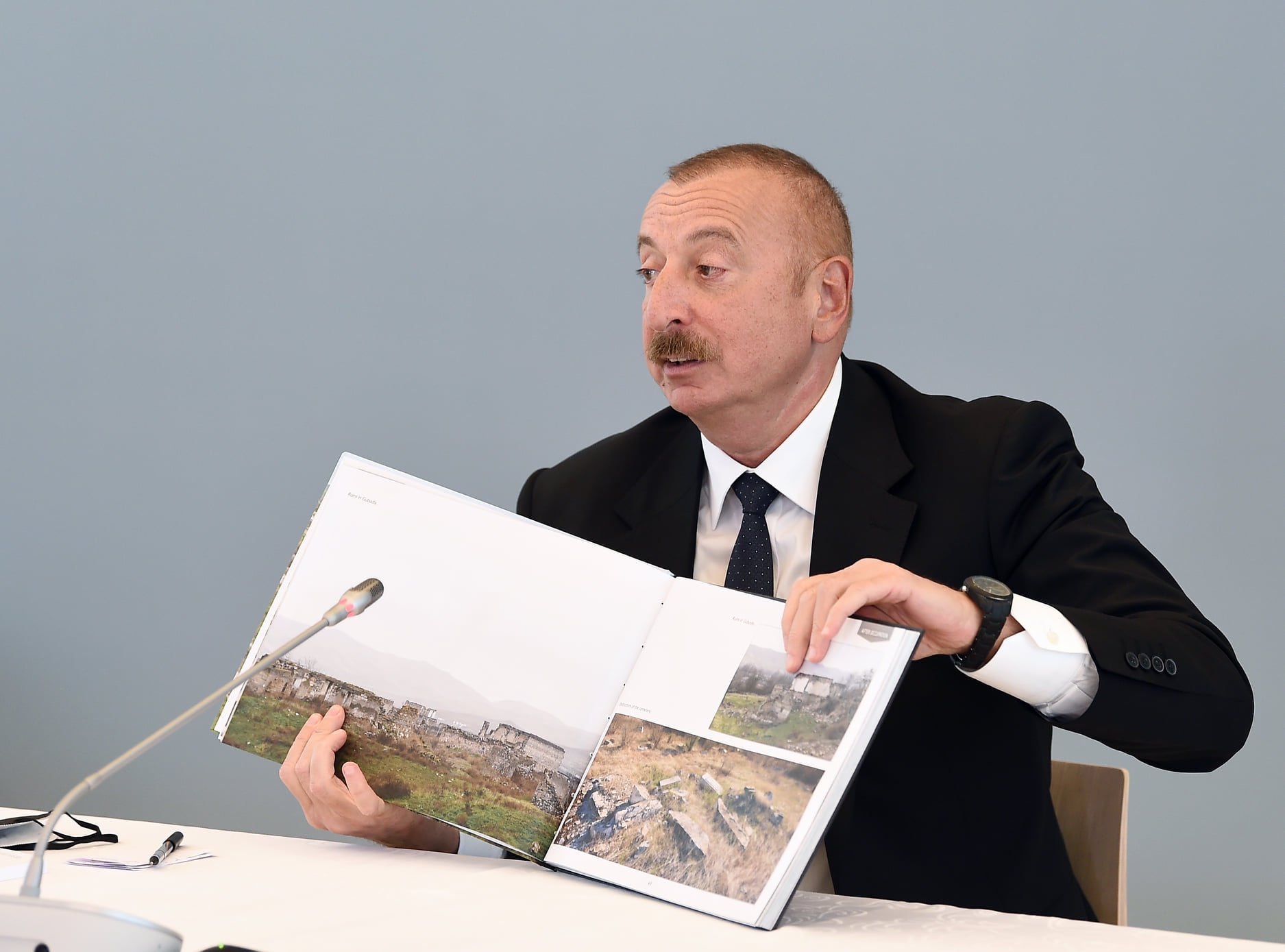 The captured Armenians are not POWs in Aliyev’s book. (president.az)

International pressure is mounting on Azerbaijan to release the scores of Armenian prisoners it continues to hold following last year’s war. But in this new diplomatic environment, does Baku even need to worry about condemnations from foreign capitals?

This week, the Parliamentary Assembly of the Council of Europe (PACE) held a session where the aftermath of the Armenia-Azerbaijan war was discussed. Lawmakers in Strasbourg lined up to criticize Baku for its intransigence on the issue; support – other than from ally Turkey – was absent. Following the April 20 session, the PACE Monitoring Committee on the conflict issued a statement “call[ing] upon Azerbaijan to ensure that all Armenian detainees are released without delay into the care of the Armenian authorities.”

Azerbaijan is no stranger to criticism from PACE, which is hardly the most authoritative body around. But the session demonstrated how the issue of the Armenian prisoners has emerged as the single most prominent storyline following the war, and that it has proven stubbornly resistant to efforts by Baku to change the topic, at least outside the borders of Azerbaijan.

The precise number of captives in question is not clear and changes slightly as circumstances develop. There are currently 188 filed at the European Court of Human Rights (ECHR). Azerbaijan acknowledges holding 72 Armenian detainees but “[i]n regard to the remaining 112 individuals, the Azerbaijani Government claim that they have not been able to identify them among their captives,” the ECHR said in a March 16 statement.

Armenia held a small number of Azerbaijani detainees following the war but has released some, and the ECHR in its statement said it was suspending its examination into the remaining cases “[g]iven the nature of the information received from the Armenian government.”

Of the Armenian detainees that Azerbaijan acknowledges, 57 are soldiers captured in the Hadrut region of Nagorno-Karabakh in December, a month after the Russia-brokered ceasefire was agreed by the two sides. It is these soldiers that Azerbaijan has focused on, arguing that they are not subject to the provision on the ceasefire statement calling on all captives to be released. Azerbaijan released 58 Armenian captives by February, according to the ECHR count, after which Azerbaijan has been arguing that it has no more prisoners of war.

Of the detainees that Azerbaijan doesn’t acknowledge, the Armenian side has strong video evidence of 48 of them being taken into Azerbaijani captivity, said Foreign Ministry spokesperson Anna Naghdalyan. Of the rest, there is either testimony by other former detainees or soldiers, or video evidence that isn’t conclusive, she told Eurasianet. One of those, an 18-year-old conscript, was recently reported dead by his family.

Azerbaijan has not publicly commented on the prisoners other than those captured in Hadrut. A spokesperson for Azerbaijan’s Ministry of Foreign Affairs did not respond to a query from Eurasianet.

At the PACE hearing in Strasburg, the Armenian delegates made the POW issue the central theme of their comments, and they were backed by several European lawmakers.

“I appeal here to Azerbaijan not to quibble on whether these Armenian soldiers were detained before or after the ceasefire, they are to be allowed home, no ifs, ands or buts,” said Stefan Schennach, an Austrian lawmaker and PACE’s rapporteur on Azerbaijan. “If you want to bring war crimes to justice, there are international forums which are responsible, rather than the two countries that just fought a war. Please let these soldiers go back to their families,” he said.

“Azerbaijan maintains a certain opacity about this situation,” added Alexandra Louis, spokesperson for the Alliance of Liberals and Democrats for Europe in PACE. “This hindrance to the repatriation of Armenian citizens is a violation of international humanitarian law.”

Azerbaijan got little support from other PACE members, other than some statements calling on the prisoner situation to be resolved alongside other contentious issues. “The first step should include identifying and returning all captives, locating missing persons, cooperating on removing mines, respecting and protecting each other's cultural heritage, refraining from hate speech, ensuring the voluntary, safe and dignified return of displaced persons, and promoting truth and reconciliation,” said Ireland’s Paul Gavan, the spokesperson for the United European Left group.

Azerbaijan’s own representatives did not directly rebut the allegations that they hold more than 100 Armenian detainees that they don’t acknowledge. They instead deflected, calling the Armenian statements politically motivated (because there are elections coming up in Armenia) and complaining that PACE isn’t focusing on the issues that interest Azerbaijan. Kamal Jafarov, one of the Azerbaijani delegates, mentioned several such issues, old (the fate of hundreds of thousands of Azerbaijanis displaced from the first war between the two sides in the 1990s; the massacre of civilians at Khojaly) and new (Armenia’s failure to hand over maps of the mines it placed during the war).

“This should not mean that we are running from any discussion. We are always ready to defend our positions, be it in any format,” Jafarov said. But neither he nor his colleagues did in fact defend their positions.

The Azerbaijani media also ignored the issue, opting not – as it often does in cases like this – to accuse the Europeans of being Islamophobic or retake the offensive with some other such counterattack. It instead barely covered the proceedings, even the comments of its own delegation.

Many outlets did call attention to German Chancellor Angela Merkel’s somewhat cryptic reference to the conflict: “It goes against our shared fundamental values if the sovereignty and integrity of states is called into question and flouted, as we are witnessing in Crimea and Nagorno-Karabakh,” she said in a speech. Grouping those two regions together seems to designate them both as illegal occupations (in the case of Karabakh, by Armenia), though that is less of an issue now following the results of the war, when Azerbaijan regained the large majority of its territory, and it’s not clear why Merkel might highlight that element of the conflict over any other.

Another comment from Merkel went unreported in the Azerbaijani media: her reference to a bribery scandal involving Azerbaijan and her Christian Democratic Union party. She called it a “very unpleasant event” and said it was being addressed within the party, the German Bundestag, and by prosecutors.

The strongly worded statements from Europe suggest that Baku’s efforts to make the Armenian captive issue part of a grand bargain – that could also include the withdrawal of Armenian military forces from Nagorno-Karabakh and Armenia providing the mine maps – are not finding much favor internationally. American and Russian officials also have also signaled that they support a unilateral release of all Armenians being held in Azerbaijan.

(There was a minor scandal in Armenia when it emerged that several Russian delegates had voted against the measure to include the prisoner issue on the PACE agenda, joining the Azerbaijani and Turkish representatives. And no Russians spoke on the prisoner issue at all.)

But Azerbaijan, in its post-war euphoria, has taken an increasingly assertive tone with other countries (again, with the exception of Turkey), after it got back what it wanted in the war. It’s even gone so far as to pick a seemingly unnecessary fight with Russia, the one outside power that does wield significant authority in the region now. So it may be even less worried that usual about international condemnation.

“Azerbaijan so far has been able to solve its problems itself,” said another Azerbaijani delegate to PACE, Nigar Arpadarai, “and I am confident that we will manage to do it this time as well.”

And Haqqin, an Azerbaijani site associated with the security services, praised the “iron chancellor” Merkel’s comments about Karabakh and Crimea, contrasting her with the feckless PACE members (though it, too, dodged the question of the non-Hadrut detainees). “In the contemporary Eurasian world, which politicians like Merkel have created, it’s better to rely on BP [the British oil firm with large operations in Azerbaijan] than on the Council of Europe,” it wrote. “Merkel and those like her respect and recognize the right of strength. That’s what Azerbaijan showed in the Second Karabakh War.”