The crowd was estimated at 30,000, and what started as a demonstration in support of the country’s military turned into an anti-government protest. 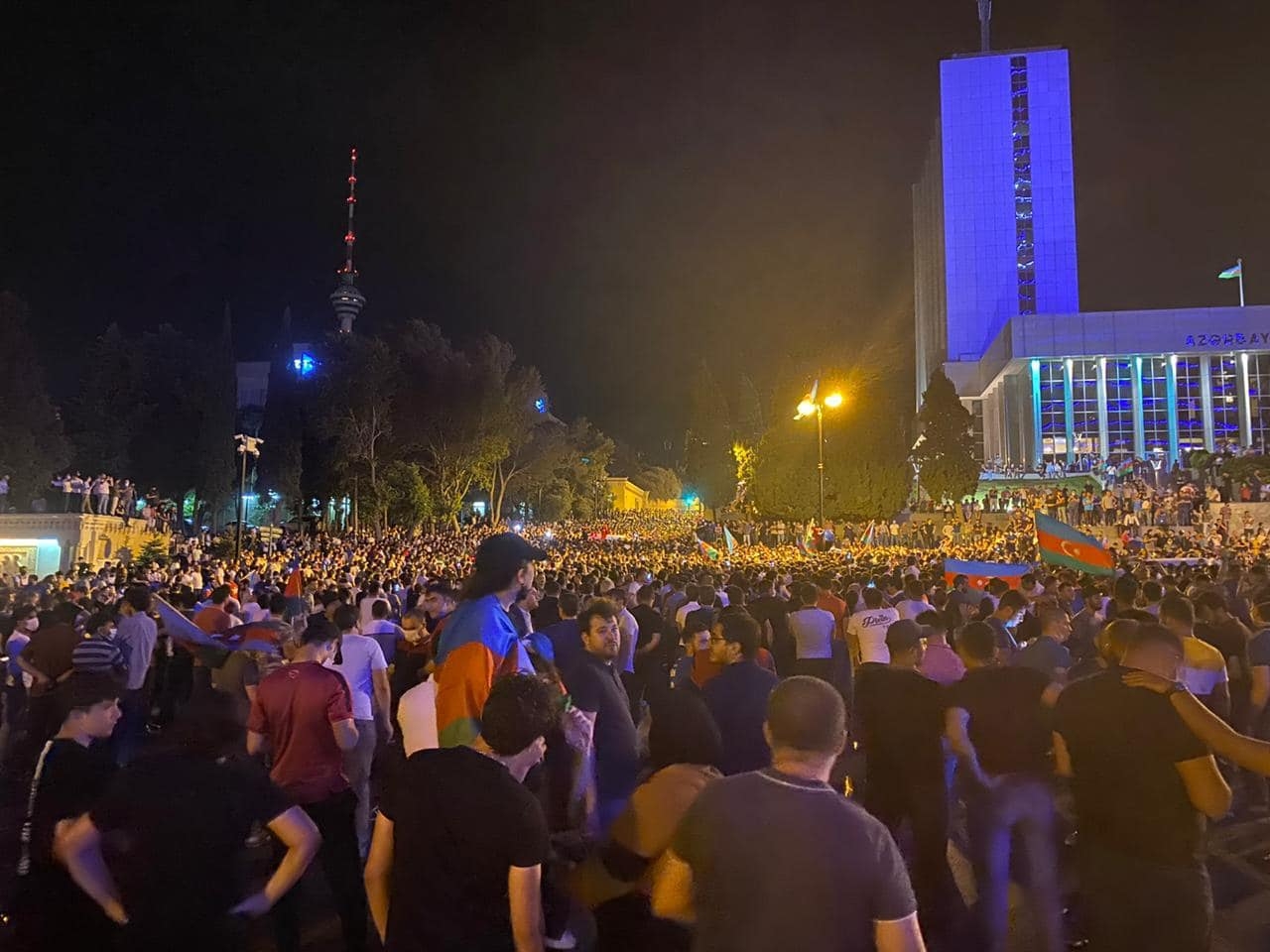 Tens of thousands gathered in Baku to express support for the country's military as clashes continued with Armenia. (photo: Facebook, Ali Hajizade)

Tens of thousands of Azerbaijanis demanding war with Armenia protested in Baku, challenging the government to take a harder approach to the conflict and breaking into the country’s parliament building.

The unprecedented protest came following three days of fighting on the Armenia-Azerbaijan border and the deaths of at least 11 Azerbaijani soldiers, including Major General Polad Hashimov. The outpouring of rage, partly directed against the government, illustrates how difficult it will be for the authorities to control the patriotic fervor that has arisen as a result of the clashes, the worst violence between the two sides in years.

The protest appeared to be spontaneous and unorganized. It grew out of a funeral on the evening of July 14 for one of the fallen soldiers in the Akhmedli district of Baku. Mourners then began marching toward the center of the city, gathering others as they walked, local independent media reported.

The protesters chanted slogans “Karabakh is ours,” “End the quarantine and start the war,” “Commander-in-Chief, give us weapons,” “Karabakh or death,” “Najmaddin resign,” “We will not leave until Karabakh is liberated.” Najmaddin Sadigov is the chief of staff of Azerbaijan’s Armed Forces.

“We have put up with enough,” one protester shouted, according to live streams of the event. “We don’t need money or jobs, let us go and fight!”

The protest wended its way toward the center, passing the war memorial space knowns as the Alley of Martyrs, though police prevented them from entering the memorial. All along, even late into the night, they gathered more and more people from different parts of the city. The independent newspaper Azadliq reported that police prevented about 3,000 from Baku’s Khirdalan district from reaching the center to join the main protests. Zaur Shiriyev, a Baku-based analyst for the International Crisis Group, estimated the crowd at perhaps 30,000.

Eventually they reached the parliament building, some breaking in and causing minor damage.

After the parliament break-in, police used tear gas and truncheons in attempts to disperse the protesters, who fought back, tipping over police cars. Other marchers tried to convince police to join them. “When Armenians rose up, their police were on their side, but you came to beat us,” one shouted. “They are worse than Armenians,” shouted another.

Nevertheless, police treated the protesters much more delicately than they do with unauthorized demonstrations organized by the political opposition, which are typically harshly shut down. Some police officers were seen chatting amiably with the protesters.

The protest was not covered by local state-friendly media and as of the time this piece was posted there was only scant commentary from government officials.

Some interpreted the parliament break-in, and some other earlier episodes, as provocations meant to discredit the protesters. “A group entered the Milli Majlis, the police used force, and instead of witnessing the unity between the Azerbaijani people and the state, Armenians saw an entirely different thing,” wrote activist Bakhtiyar Hajiyev on his Facebook page.

Later in the morning of July 15 the parliament press office issued a statement complaining that breaking into the parliament was the result of “some provocateurs aiming at destruction” and that it was “disrespectful to the holy spirit of the martyrs.”

In the protests, seven police officers were injured, two cars were ruined and 14 more were damaged, according to a joint statement from the prosecutor general’s office and the Interior Ministry. An investigation has been launched on charges of “mass rioting and resistance or use of force against a government representative,” the statement said.

There also were smaller rallies in support of the military in other cities around Azerbaijan, usually connected to the burials of fallen soldiers. In Sumgayit, the hometown of Major General Hashimov, thousands gathered. Independent journalist Khadija Ismayilova reported, citing unnamed sources, that Hashimov’s body had been brought from there to Baku and that the details of his funeral were not revealed even to his friends.

In the day before the protest, social media was dominated by discussion of Hashimov’s death, with many expressing indignation that such a high-ranking official could be killed in battle and complaining that it was the result of poor leadership.

The protest “was authentic, organized without the government’s intervention, and was on a scale much greater than we saw during the April escalation [the previous most serious clash between the two sides, in 2016],” Shiriyev told Eurasianet. “The death of the major general and other high-ranking officers was a turning point. Before, Azerbaijanis were looking at the events on the border as a ‘normal’ thing. But this changed people’s minds.”

The protest is both a “double-edged sword and a cold shower” for the government, Shiriyev added.

“It’s the first time in decades that we have seen a genuinely grassroots expression, on such a large scale, of the frustration about developments on the front line, with the protesters demanding more action from the government. The government will certainly use the protests in its conversations with the main international players to advocate for more pressure on Armenia,” he said.

“On the other hand, now the question is: how do you satisfy them [the protesters]? Revenge? More death on the international border or starting a military campaign on the line of contact? It’s hard to say if the protests will continue but many in the government may now press for changing either domestic policies or its approach to the conflict-related issues affecting the lives of the people living along the border or the line of contact,” he said.

One possible way forward: following a cessation of the current hostilities, greater government investment in and concern for civilians living in border areas. That would be appreciated by a broad swath of the Azerbaijani public, Shiriyev said.