Protest, prison and politics: The making of an activist in Kazakhstan

“I did not serve four-and-a-half years in prison to come out and keep quiet.” 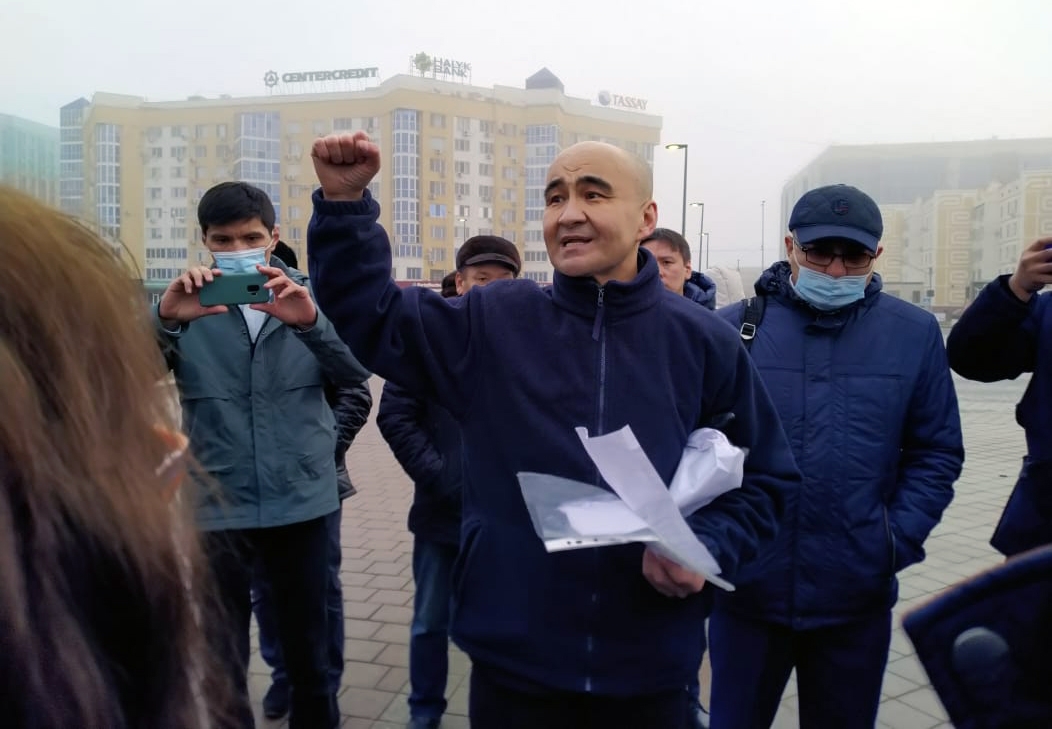 Maks Bokayev, shortly after his release from prison this month, in Atyrau's main square (photo by Raul Uporov/Uralskaya Nedelya, used with permission)

When Maks Bokayev walked free earlier this month after nearly five years in prison, he headed straight to the main square of his hometown, Atyrau, an oil hub in western Kazakhstan.

It was there that protesters gathered in 2016 for a demonstration against land reforms that set Bokayev on a collision course with the government.

He is now intent on picking up where he left off, although the authorities have other plans.

Before Bokayev finished serving his five-year sentence on charges of fomenting what spiraled into a wave of nationwide protests unlike any Kazakhstan had seen in a quarter-century, a court issued draconian probation restrictions on the activist.

For three years, Bokayev will be prohibited from joining public associations, including political parties, participating in community events, such as demonstrations, or working with civil society groups. He is not even supposed to give interviews.

But Bokayev refuses to be muzzled, as he told Eurasianet over WhatsApp in an interview following his release.

“I did not serve four-and-a-half years in prison to come out and keep quiet,” he said with a chuckle. “If I had preferred to keep quiet, I might not have served time at all.”

The restrictions have only fueled the suspicions that the original case against Bokayev and his ally, Talgat Ayan, an Atyrau-based lawyer also jailed over the land protests, was all about politics. Ayan was freed in 2019.

“The three-year restriction on public activity directly confirms that Maks and Talgat’s case has political undertones,” campaigner Galym Ageleuov told Eurasianet. “This is illegal and restricts Maks’s right to freedom of speech and expression.”

Bokayev considers himself “illegally convicted” and has pledged to defy what he has described as “ridiculous restrictions.”

Bokayev’s first plan is to head back onto that Atyrau square on February 28. On that day and subsequent Sundays, he says, he will demand political reforms.

He has already called for a re-run of last month’s election, which installed another rubberstamp parliament, notwithstanding pledges from President Kassym-Jomart Tokayev, who has been in power since 2019, to usher in political competition.

Such defiance explains why the powers-that-be are wary of Bokayev, a charismatic 47-year-old veteran activist with an engaging oratory style and a knack for tapping into grassroots concerns.

In a country short of commanding opposition leaders with popular appeal, his political nous and common touch are striking.

“The authorities fear smart public figures who could lead resistance,” suggests Ageleuov, who has known Bokayev through activist circles for two decades. They dread the emergence of “individuals who could turn into national heroes and start fighting the regime,” he said.

Bokayev had plenty of time in prison to hone his political philosophy and work on articulating those beliefs in terms relevant to the layperson.

To explain the merits of democracy, he devised a boxing analogy.

Just as a boxer cannot land a strong blow without getting his stance correct, he would say, “if we want our country to develop, our petrodollars not to disappear in vain, the homes our builders construct not to fall down in a year, our roads not to be washed away at the first snow, we need democratic institutions, we need a free press, we need freedom of assembly.”

Bokayev cut his teeth as an activist in the early 2000s working on anti-narcotics programs in Atyrau. That was also when he had his first brush with the security services, who he says tried to recruit him as an informer.

Over his two decades campaigning, Bokayev has espoused many causes guaranteed to raise official hackles, from political freedoms and corruption to environmental pollution by oil majors working out of his hometown on the Caspian Sea.

Bokayev would certainly have hit the government’s radar when he turned up in the town of Zhanaozen to monitor the trials of oil workers arrested after fatal unrest in 2011, when security forces opened fire on strikers.

He was a confirmed irritant by 2016, when he and Ayan called for a protest in Atyrau against land reforms. The rally attracted unusually large numbers by Kazakhstan standards and inspired similar gatherings nationwide.

The government was caught short by resistance to its reforms. The government said it had only intended to attract investment into agriculture, but a distrustful public sniffed the possibility of more corrupt schemes wherein officials would take backhanders while parceling out land.

In the end, authorities backtracked and imposed a five-year moratorium on the reforms.

Still, Bokayev and Ayan were imprisoned for spearheading the pushback, which the powers-that-be depicted as a sinister plot to overthrow the state rather than an outbreak of peaceful dissent.

Memories of that resistance, and maybe Bokayev’s exit from prison, were possibly uppermost on Tokayev’s mind when he pledged this week to draft new legislation prohibiting the sale of agricultural land to foreigners.

In 2016, the notion that foreigners were acquiring a backdoor route to land ownership was a red rag to many Kazakhs, who see land as sacrosanct public property.

In a country where Sinophobia is rife, the idea that territory could be ceded willy-nilly to investors from China gained ground and lent a nationalist tinge to the protests.

So is Bokayev a nationalist? He is no chauvinist, he says with a laugh, preferring to describe himself as a patriot “who suffers for his nation” and one in whom “liberal views predominate.”

He rattles off a list of reforms he will be pursuing now that he is free.

“We need supremacy of the law, we need democratic institutions, we need a modern electoral system in which the most varied parties can participate, we need to change party legislation, we need decentralization,” he said.

And standing up for his convictions trumps any worries about another spell in prison for breaching his probation restrictions.

“I don’t want to go prison, of course,” he told Eurasianet. But “what remains to be done, if our country is such that a person can go to prison for his convictions?”