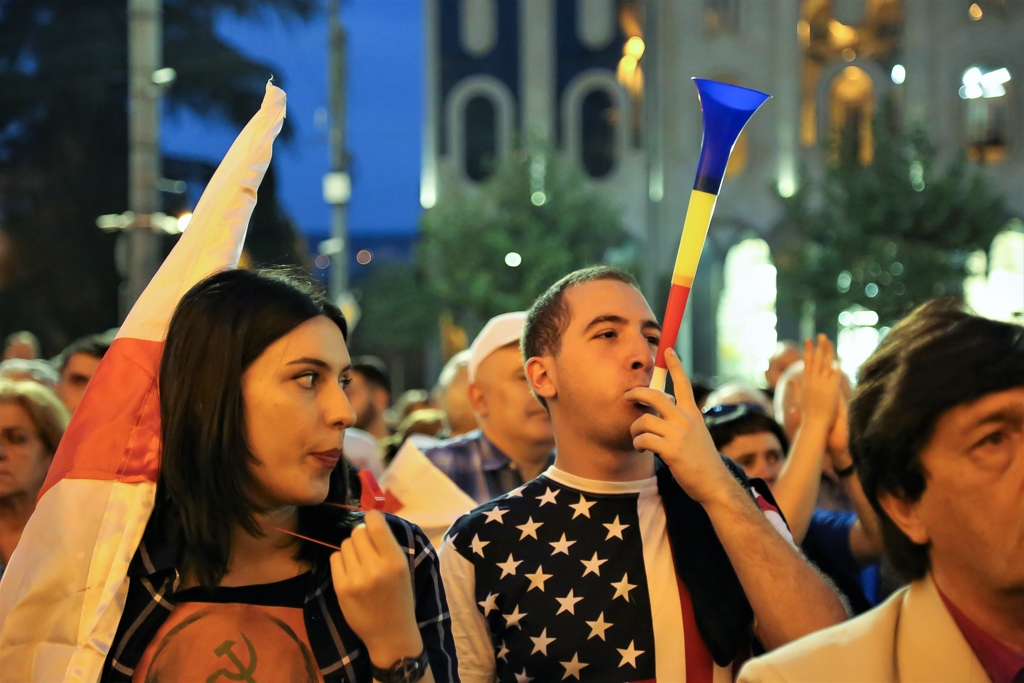 “All Against One” was the motto of a September 20 rally that brought together everyone who has a bone to pick with Ivanishvili. (all photos Giorgi Lomsadze)

After a respite in August, anti-government protests have returned to Tbilisi three months after they began with a fresh force and a new demand: the resignation of the chair of the ruling party and behind-the-scenes ruler of the country, Bidzina Ivanishvili.

“All Against One” was the motto of a September 20 rally that brought together everyone who has a bone to pick with Ivanishvili, who has – de jure or de facto – ruled the country since 2012.

Blowing into vuvuzelas and waving Georgian, European Union and NATO flags, thousands filled Tbilisi’s central Rustaveli Avenue in front of the parliament building. With the Georgian national anthem blasting from speakers, protesters raised up red cards – a penalty code in soccer, signifying a player’s ejection – as what they described as their final warning to Ivanishvili.

Protesters accused Ivanishvili of state capture, backsliding on democracy, and collaboration with Russia, the country most Georgians regard as the top threat to their homeland. “We will not put up with one-man rule, oligarchy and shadow governance. Bidzina Ivanishvili bought and stole all the branches of government,” said Shota Dighmelashvili, one of the protest leaders, reading a new manifesto to the gathered crowd.

Politicians, cultural figures and youth activists took turns on a makeshift stage to air grievances against Ivanishvili. His latest major adversary, banker-turned-politician Mamuka Khazaradze, also appeared on stage and said that he is entering politics to oppose not just Ivanishvili but “the decayed Soviet mentality” that the tycoon and his system stand for.

Back in June, when the protests were aimed at forcing the dismissal of then Interior Minister Giorgi Gakharia, demonstrators showed Ivanishvili a yellow card, the first warning in soccer language. Both Ivanishvili and protesters have upped their game since.

In defiance of the calls to dismiss Gakharia, Ivanishvili instead installed him as the country’s new prime minister. The move put the billionaire in direct confrontation with the protesters, who hold the interior-turned-prime minister responsible for the heavy-handed response at an anti-Russia rally on June 20. That crackdown sparked several weeks of broader anti-government protests.

“Our voices need to remain strong to make the government hear that our demand was Gakharia’s dismissal, not his promotion,” said human rights lawyer Giorgi Mshvenieradze, speaking at the rally. 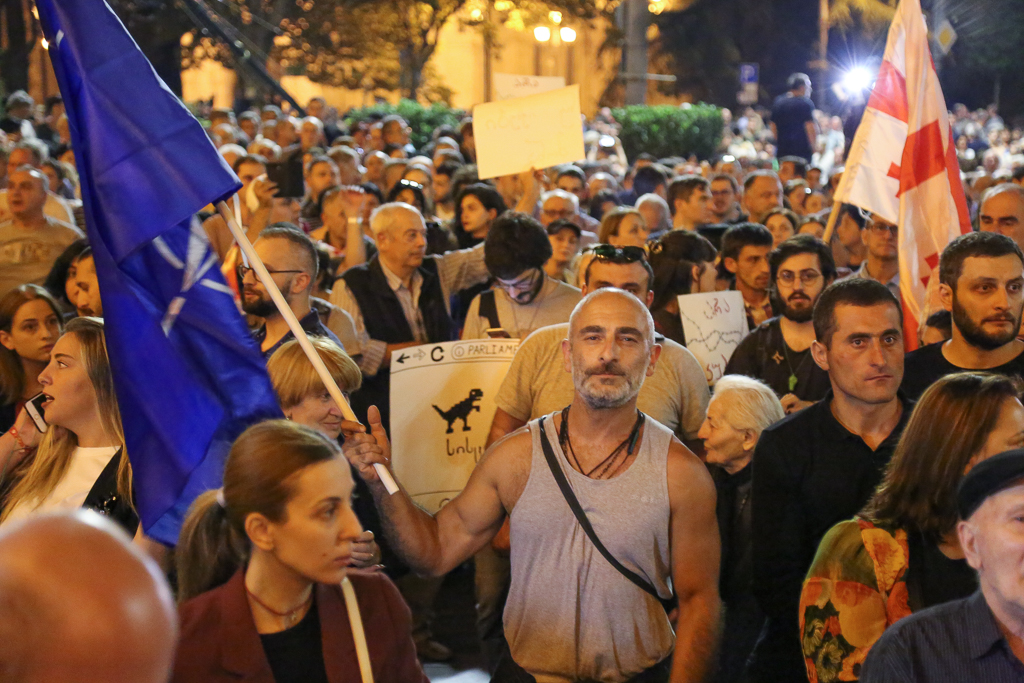 Many of the protesters argue Gakharia’s promotion demonstrates that Ivanishvili is pursuing a policy of appeasement, if not outright collaboration, with the Kremlin. Moscow maintains large military presences in the breakaway territories of Abkhazia and South Ossetia, and has for years gradually been building a massive fence to forcibly separate them from Georgia proper.

It was against this backdrop that Georgian Dream invited Russian lawmakers to participate in a June 20 discussion in the Georgian Parliament as part of a parliamentary exchange of Orthodox Christian countries. One of the Russians, Sergey Gavrilov, took the parliamentary speaker’s seat, an act that was televised and which sparked an outburst of public anger. Protesters quickly gathered and then riot police from the Interior Ministry, helmed by Gakharia, unleashed rubber bullets and tear gas against them.

Hundreds were arrested, many injured and at least one teen was maimed for life – she lost an eye – in what became known as the “Night of Gavrilov.”

Some policemen ended up charged with using excessive force and the parliamentary speaker resigned, but protesters demanded that Gakharia be held responsible for the police abuses. Gakharia’s appointment to the top executive government office, rubber-stamped by Georgian Dream, was welcomed by Russian politicians – including Gavrilov himself – rubbing salt in the wound. “We have a collaborationist government,” Nino Danelia, a press freedom activist, said at the September 20 demonstration.

The increasingly concerted pressure appears to be endangering Ivanishvili’s political standing: According to a recent opinion poll, support for Georgian Dream has hit an all-time low of 21 percent, with disapproval of the government’s performance hitting 60 percent. While that approval rating remains higher than any individual opposition force, it suggests a vulnerability to a potential unified opposition and undecided voters.