Moscow, which heavily backs the de facto republic, called the events an “internal affair” of Abkhazia and appealed for talks between the government and opposition. 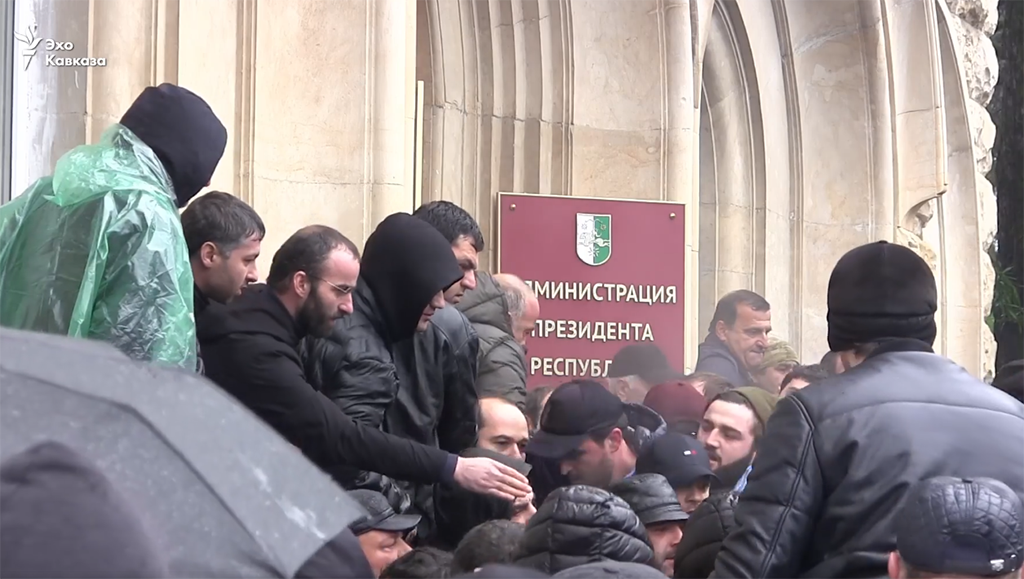 Screenshot of protesters breaking in to the de facto Abkhazian presidential administration building on January 9.

Demonstrations against the president have continued for a second day in Abkhazia, with several hundred protesters occupying the presidential administration building.

The crisis began on January 9, when a group of protesters stormed the administration building, forcing de facto president Raul Khajimba to flee. It appeared sparked by two separate controversies from the previous autumn: a contentious election for de facto president, and an unsolved triple murder.

In the election, the incumbent Khajimba narrowly won, but losing candidate Alkhas Kvitsinia contested the results. A hearing was held on January 9 to consider Kvitsinia’s complaint, and when the court temporarily adjourned and the participants were leaving the courthouse, they were accosted by a group of protesters led by an Abkhazian commander of the Russia-backed separatist forces in Ukraine, Akhra Avidzba, reported a journalist from RFE/RL who was covering the trial.

Avidzba – who said he had returned to Abkhazia only the day before and that the authorities had tried to arrest him while doing so – called on the opposition supporters to join his group, who were holding a protest at the nearby presidential administration building against the killing of three people in Sukhumi in November. A bodyguard for Khajimba has been arrested in connection with the attack, which killed two reputed organized crime leaders along with a waitress at the restaurant where they were attacked.

Soon protesters, who by then numbered several hundred, then broke into the building, breaking the windows, according to video taken at the scene. Khajimba was forced to flee to a government dacha.

Khajimba later issued a statement saying that, if necessary, he would institute a state of emergency. The parliament, meanwhile, approved a resolution calling on him to step down, which he rejected.

"Representatives from the opposition have repeatedly said that they will wait for the decision of the Supreme Court on the results of the election and act strictly within the legal framework. However, understanding the fact that their demands in court have no prospects, the opposition has decided to go ahead with radical methods," Khajimba said. Khajimba said he was willing to negotiate with opposition leaders to resolve the crisis.

Khajimba “has to decide how to act in this critical moment, because even pro-government deputies called for his resignation,” former de facto foreign minister Vyacheslav Chirikba, who served for some time under Khajimba, told the Russian news agency TASS. “The room for maneuver is very limited … the people have voiced their opinion about his fate, and we need to consider new presidential elections.”

Meanwhile, another former candidate also returned to Abkhazia: Aslan Bzhania, who had been Khajimba’s leading opponent until he suffered a mysterious illness, claimed he was poisoned, and was forced to drop out of the race. On January 9 Bzhania flew from Moscow, where he was continuing to receive treatment, to Sochi where he entered Abkhazia by land.

Also on January 10, an Abkhazian court granted one of the demands of the opposition the day before: that one of the judges looking at the complaint regarding the election be recused because of a conflict of interest.

Abkhazia is recognized by most of the world as part of Georgia, but Russia and several allies recognize it as an independent state and it is heavily backed by Moscow. On January 10, the Russian Foreign Ministry issued a statement saying it considered the events to be an internal matter. But it appeared to give some credence to the opposition demands, calling for talks.

“We are closely following the internal political situation in Sukhumi,” the MFA statement said. “We consider the events in this country to be its internal affairs. We are counting on a swift stabilization of the situation in Abkhazia within a legal framework via direct negotiations between the interested parties.”