Protestors in Kyrgyzstan Cut Power to Flagship Gold Mine 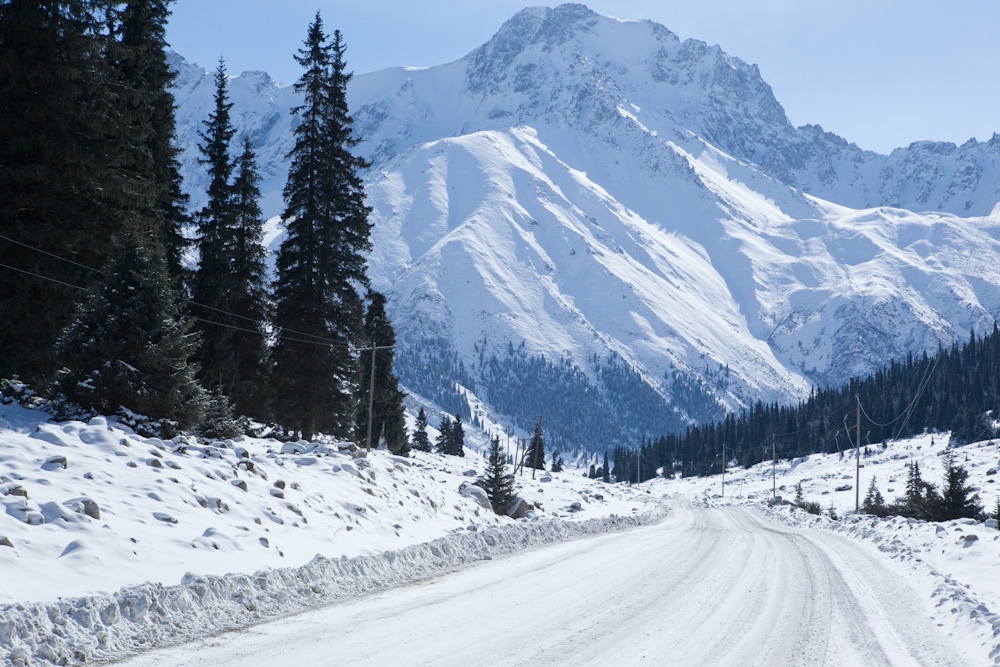 The road to the Kumtor mine, which sits at 4,000 meters in the Tien Shan mountains. (David Trilling)

For the last three days, several hundred protestors have again blocked the road to Kyrgyzstan’s largest and most lucrative enterprise: the Kumtor gold mine. Late on May 30, demonstrators seized an electricity substation and cut the power supply to the mine, the company announced on Twitter.

The protestors – mostly angry young men, judging from photos – have demanded environmental safeguards and more investment into local infrastructure. Specifically, they want hospitals, schools and gymnasia. Some also wish to tear up the government’s 2009 operating agreement with the company operating the mine.

“It’s like first slaughtering a cow and then asking her for milk,” one Bishkek analyst said of the demands.

Kumtor – which produces about half of Kyrgyzstan’s exports and, in a good year, 12 percent of GDP – is a frequent target. Environmental concerns have plagued the operation since it began in the mid-1990s, heightened by a sodium cyanide spill into a river in 1998. But few believe environmental concerns alone are behind the regular unrest.

In a country with widespread unemployment and few opportunities, young men like those blocking the road this week are easily whipped into a fury. Many observers believe they are paid. And the timing of this particular roadblock, which began on May 28, is curious.

For three months, the Kyrgyz government has been locked in negotiations with Toronto-listed Centerra Gold, which owns Kumtor. In February, parliament, acting at the urging of Economics Minister Temir Sariev, gave the government three months to renegotiate the 2009 operating terms or abandon the agreement. The deadline is June 1, though in recent days officials have asked for several more weeks to close the delicate negotiations. (Complicating the talks, Kyrgyzstan owns one-third of Centerra, meaning it is negotiating with itself.)

Some lawmakers have urged Kumtor be nationalized. Few reasonable people in Bishkek or beyond think Kyrgyzstan has the capacity to operate the mine, but such tactics are a painless and cost-effective way to gain popularity in a country as divided as Kyrgyzstan (while frightening off investors). Some powerbrokers seem to have the attitude that if they cannot have a piece of the pie, there should be no pie: “If someone else gets rich,” this thinking goes, “my power is diluted.”

In a statement, Prime Minister Jantoro Satybaldiyev blamed “those interested in destabilizing the situation in the country” for the roadblock. He didn’t elaborate. Earlier this month, President Almazbek Atambayev blamed “mob rule” for the chaos in the mining industry that has frightened away foreign investors.

For the demonstrators, Kumtor is an easier target than their unaccountable local officials. Kumtor pays tens of millions of dollars into a development fund for the region around the mine (1 percent of gross revenues, or $29 million between 2009-2012). That money is designed to fund projects like the hospitals the protestors are ostensibly seeking. Yet, as one Kumtor official told me this winter, the company suspects local officials in Issyk-Kul province steal half that money.

Where we go from here is unclear. With the government in far-away Bishkek apparently helpless – police were reportedly afraid to stop the protestors from attacking the electricity substation – it’s between the angry young men and the Canadians stuck up in the mountains. They have given into demands in the past.

Kumtor can operate for a time on generators, but the electricity cut should affect production. Fuel and food supplies are projected to last five or six more days. For certain, a cut in production hurts Kyrgyzstan’s budget in lost tax revenues and dividends. There are also concerns the trouble could hit Kyrgyzstan’s fledgling tourism industry, especially because the roadblock is on the southern shore of Lake Issyk-Kul, a popular summer destination for Kyrgyzstanis and foreigners alike.

As is so often the case with locally mobilized protests in Kyrgyzstan, the big question always seems to be: Will this week’s unrest bring more harm or good, and to whom?