“Sargsyan and the Republicans are one and the same, he is just a puppet,” one protester said. 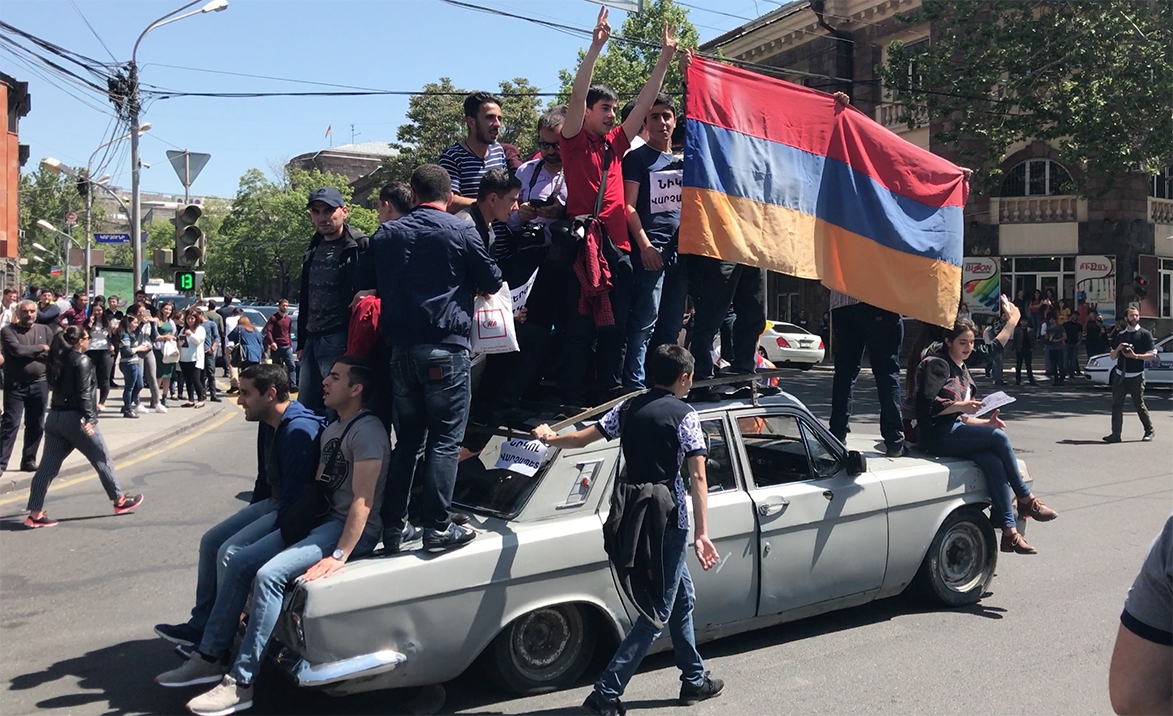 Negotiations over a transfer of power between the Armenian government and opposition broke down April 24, renewing the political crisis in the country and again sending tens of thousands of protesters out on to the streets.

The leader of the protests, Nikol Pashinyan, was supposed to meet on the morning of April 25 with the acting prime minister, Karen Karapetyan, to discuss the road ahead after the resignation of longtime leader Serzh Sargsyan.

But late the night before, Karapetyan announced that he was calling off the talks. The announcement came just hours after Pashinyan gave a press conference in which he stated unequivocally that no member of the ruling Republican Party of Armenia could remain in the country's leadership.

Pashinyan, while he was leading the protests for Sargsyan to step down, presented that as the first step of a four-point agenda: 1. Sargsyan's resignation; 2. the election by parliament of a “people's candidate” for prime minister; 3. establishment of a transitional government; and 4. new elections. He reiterated that agenda at the April 24 press conference.

Given Sargsyan's resignation, the agenda item now is picking a new prime minister, and Pashinyan has been unclear about what exactly he means by a “people's candidate.” At the press conference he confirmed that he would accept the position if he were voted in.

Pashinyan also had not previously explicitly addressed how he saw the fate of the Republicans, and Karapetyan accused him of dictating the terms of the negotiations. “Pashinyan has unilaterally set forth new demands, particularly as regards the format, agenda and media coverage of the meeting.” Karapetyan said in a statement. “He proposed a list of people to attend the talks on our side, and announced that he would negotiate exclusively on his own agenda. … Having some experience in negotiations, I can say that I have never heard of talks in such a format.”

The government named Karapetyan as acting prime minister after Sargsyan stepped down on April 23. It may have been expecting the appointment of the young, relatively well-respected Karapetyan to be acceptable enough to Armenians so as to take the momentum out of Pashinyan's protest movement. But Pashinyan continued to press his advantage, and when talks broke down he called on his supporters to take to the streets again.

They did so, by the tens of thousands. Pashinyan led supporters on a march around the city, as they chanted “Nikol – Prime Minister!” and “Down with the Republicans!”

“Sargsyan and the Republicans are one and the same, he is just a puppet,” said one of the marchers, Vakhtang Stepanyan.

Elsewhere around the city, protesters set up roadblocks in an effort to bring the city to a halt. At one such roadblock, on Tigran Mets Avenue, one of the young protest leaders, Varak Sisserian, said he was pleasantly surprised how quickly the protest movement regained energy. “I was thinking that Karen Karapetyan might have more support than Serzh, both in the public administration and with the people. But from what I'm seeing today, people are perceiving him as a puppet,” he said.

Meanwhile, Pashinyan's allies are now working to lobby other members of parliament to ensure a majority for Pashinyan when a vote for a new prime minister comes up, which is expected in a week.

There were signs of defections from some of the Republicans' erstwhile allies. Their partner in the government, ARF Dashnaktsutyun, announced it was leaving the coalition.

Prosperous Armenia, a party led by oligarch Gagik Tsarukyan and representing a systemic opposition in the parliament, announced they were joining the protest movement. “We stand by the people, so we urge all our members to mobilize and join the demonstrators in the streets in Yerevan and all Armenian marzes [regions],” the party said in a statement.

In another sign of a government in crisis, employees at a number of government agencies were told to stay home, Sisserian said, including the government-affiliated think tank where he works. “They were told 'go home,' and we will tell you when to come back,'” he said. “The government is in chaos.”