A member of Georgia’s ruling party invited a Russian lawmaker to preside over a meeting inside Georgia’s parliament. 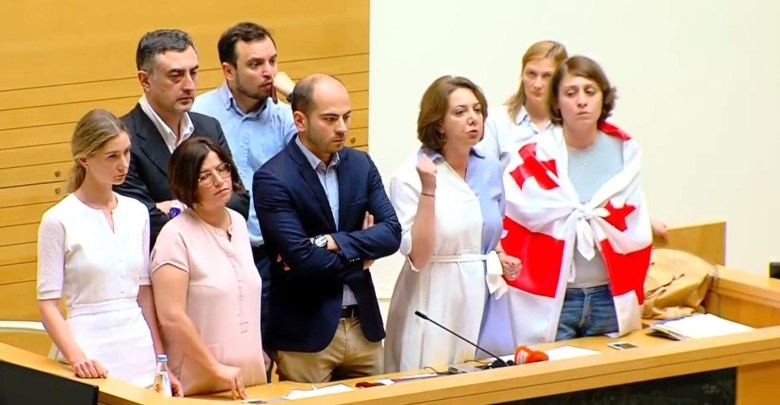 A Russian lawmaker taking the podium in Georgia’s parliament on June 20 caused thousands of angry Georgians to take the streets, accusing the ruling party of collaborating with archenemy Russia.

Tensions flared when Sergey Gavrilov, a member of Russia’s Duma, sat in the parliamentary speaker’s chair to address an international gathering of lawmakers from Orthodox Christian countries – the Inter-Parliamentary Assembly on Orthodoxy (IAO) – who are meeting this week in Tbilisi. During a break, members of Georgia’s main opposition parties marched in and occupied the speakers’ podium.

“Where is Gavrilov? Where is the occupier? Show him to me,” shouted Elene Khoshtaria, member of the European Georgia Party, as she bounded into the parliamentary hall draped in the Georgian national flag. She walked up to the podium and tore Gavrilov’s speech to pieces.

“Today, we, the members of parliament, will defend the parliamentary hall from the Russian occupiers,” said Salome Samadashvili, member of the United National Movement, as she stood next to Khoshtaria. “This meeting will not continue until the Russian delegation leaves this chamber,” added Irma Nadirashvili, also of the of the United National Movement.

Since the 2008 war with Russia and Moscow’s recognition of breakaway Abkhazia and South Ossetia, Tbilisi views Russia as an occupier. Gavrilov voted for Russia to recognize the territories as independent.

Earlier in the day, Ukraine’s ambassador to Georgia, Ihor Dolhov, walked out of another IAO meeting when Gavrilov, the IAO president, began his address. “I don’t want to listen to the Russian Federation, which occupied Georgian and Ukrainian territories,” Dolhov said.

Georgian opposition groups are accusing the ruling Georgian Dream party of selling out to Moscow by inviting the IAO to hold its annual meeting in Tbilisi. “The Georgian Dream brought in the occupiers and put them in the parliamentary speaker’s seat,” Khoshtaria said. “By doing this, the Georgian Dream slapped all of Georgia’s history in the face.”

Some Georgian Dream members tried to calm tensions by saying that they were also disturbed to see a Russian deputy preside over a meeting inside Georgia’s parliament. “Russia is a country that occupies 20 percent of our territory and it was disturbing to see a representative of that country’s parliament in the chair of the Georgian parliamentary speaker,” said Speaker Irakli Kobakhidze.

Thousands blocked the main avenue outside parliament by 7 p.m., while protestors also reportedly gathered in other cities. Many called Ivanishvili and his entourage traitors and demanded they step down. “Do you really believe that they committed treason by accident?” said Manana Nachkebia of the New Rights Party. “Step by step, using soft power, they [the Georgian Dream] want us to accept that diplomatic relations with Russia can be restored, that it is possible to have friendship with Russia, it is possible that Russia and Georgia are back in together […] but their calculations were wrong.”

Booed by protesters, Gavrilov left the country and warned that Georgia will face consequences for the incident.