The government says the move is necessary for the sake of efficiency and health, but those in affected communities complain that it is a symptom of Yerevan's neglect for rural areas. 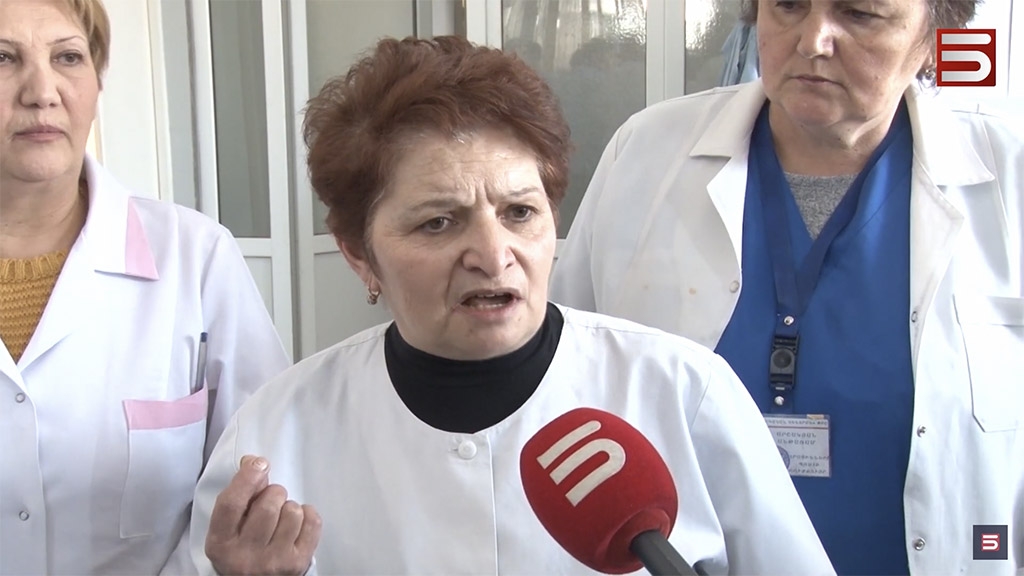 Screenshot of a report from Armenia's 5th Channel on protests at a maternity clinic slated to close under a new government plan.

Plans to close several rural maternity clinics in the name of efficiency have resulted in protests around Armenia.

The Ministry of Health said that it planned to close any state maternity clinic which saw fewer than 150 births per year. Clinics that are less busy than that “are not cost effective and, more importantly, are less effective in preventing maternal and infant mortality,” the ministry said in a statement. “Experience shows that over time, a small number of births inevitably leads to a decrease in professional qualifications of the staff.”

But to many in the affected regions, the decision was evidence of Yerevan’s neglect for Armenia’s periphery.

When word got out this month that the new rules would mean seven clinics around the country would be forced to close, protests were organized in several of the affected areas.

“They call this a city but what kind of city is it when the city government is closed, the hospital is closed, and only a music school is left,” one man at a protest in Maralik, in Armenia’s northwestern Shirak province, told local media. “People live here, don’t they?”

The maternity clinic at Maralik registered 106 births in 2019, and administrators complained that they barely got any communication from the Health Ministry about the order to shut down the maternity operations.

At another protest, in the town of Yeghvard, one participant was a woman who was born in the town but returned home from Moscow to give birth there. “I dreamed of having a baby in my city,” she said in an interview with 5th Channel. “I feel terrible for the people who work here, this is a huge stress.” One doctor at the clinic told the channel: “We worked during the war and the earthquake” of 1988. “If we survived those years, can’t we survive in good conditions?”

The clinic at Yeghvard, just 15 kilometers from Yerevan, registered just 136 births in 2019, but doctors argued that they also had no fatalities of mothers or babies.

“We will be left unemployed and doctors in Yerevan will be overloaded with work and exhausted,” the doctor said. As a result of the protests, the Yeghvard clinic got a reprieve and will continue to operate for another year.

Prime Minister Nikol Pashinyan has taken a characteristically caustic attitude toward those who disagree with his government’s policies.

"We have to approach this strategically – it is no different to drive from a village to Maralik than to Artik, which is better equipped. We should improve emergency services so people can be delivered safely to the hospital,” he said during a discussion in parliament on January 22. “Also, I was shocked to see that the doctors from Maralik were wearing the same outfit in which they perform deliveries into the snow and mud to protest."

5th Channel, which is owned by an associate of former president and Pashinyan foe Robert Kocharyan, has been especially avid in covering the protests.

The channel covered live what it described as one of the last births to take place at the clinic in Acharjur, in Armenia’s northeastern Tavush region.

The Ministry of Health responded with a statement criticizing the channel for not observing proper hygiene, as the reporter was not wearing a mask or a surgical cap while covering the January 15 birth. “Put aside the desire to score political points by putting people’s lives in danger,” the ministry said.

The protests notwithstanding, the maternity clinic in Acharjur will still close, the ministry said.

Pashinyan also complained about a report on public television about the closure of the Acharjur clinic, noting that one woman cited in it had come from the village of Voskepar. Pashinyan said that village is 25 kilometers from Acharjur, while another town that has another maternity clinic, Noyemberyan, was closer.

“This fact shows that we are dealing with simple manipulations,” Pashinyan said.