Georgians again took to the streets after the government backed down on a promise to reform an election system that gives a big leg up to the ruling party. 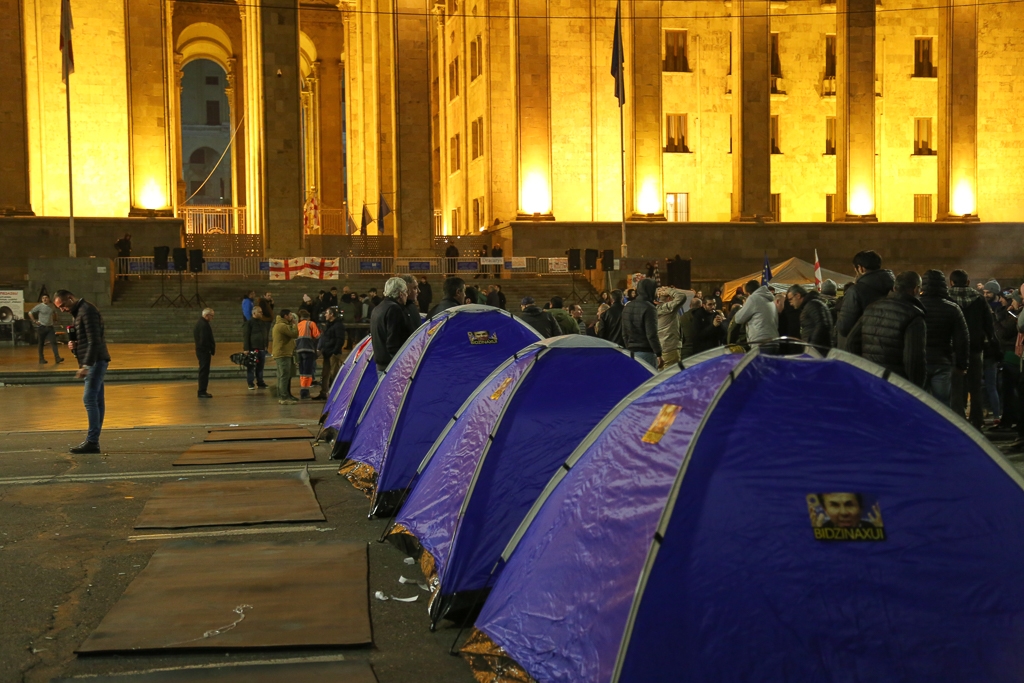 Protesters returned to the streets of Tbilisi after lawmakers failed to pass a law meant to level the playing field in parliamentary elections. The government promised to pass the law this summer as a key concession to the opposition amid another burst of protests.

“We are witnessing an attempt to steal our electoral choice,” said former president Giorgi Margvelashivili as he addressed the crowd gathered in front of Georgia’s parliament on the evening of November 14. “I call on everyone who is watching us on the television screens to come here… to defend our democracy.”

Tbilisi is hunkering down for another long political fight, as protesters blocked traffic and pitched tents on the city’s central Rustaveli Avenue and police erected metal barriers closing off the thoroughfare. Many of the tents were festooned with photos of Bidzina Ivanishvili, the billionaire head of the ruling Georgian Dream party, whom the protesters blame for the reform’s failure. Other protesters marched to Ivanishvili’s hilltop mansion and painted graffiti on its fence. 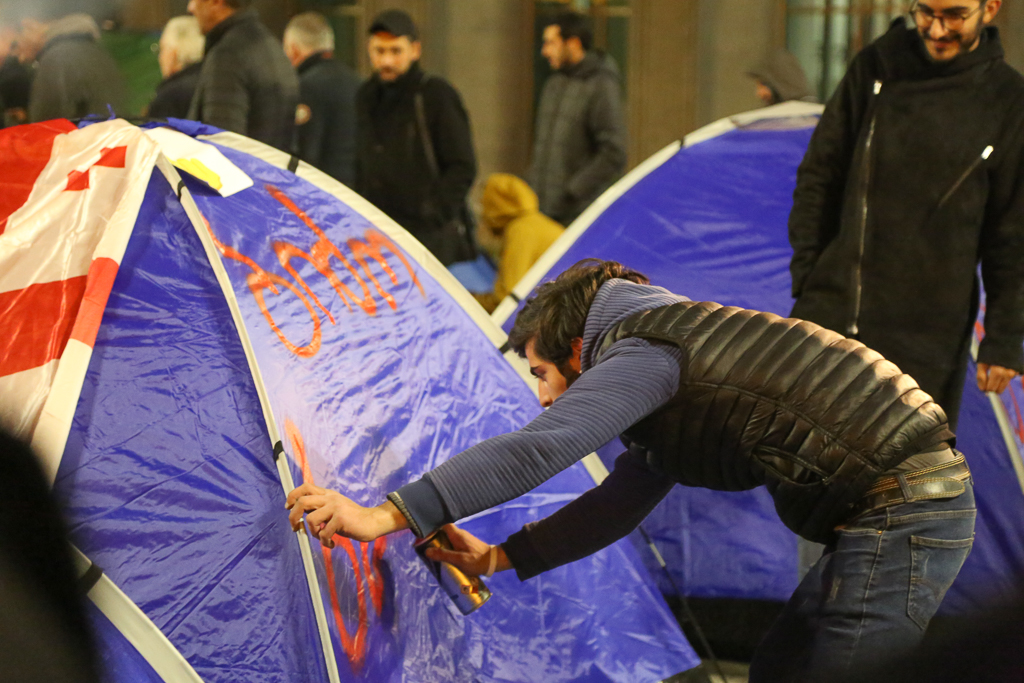 After the scandalous appearance of a Russian lawmaker in Georgia’s parliament this June, protesters took to the streets to demonstrate against a government they portrayed as autocratic and out of touch. To allay those objections, Ivanishvili personally vowed to change the electoral system to make the legislature more representative of the popular will.

But Georgian Dream “looked at the poll results that showed that they were going to lose in 2020 [parliamentary elections] and said ‘we don’t care about the people’s will, about what the public thinks,’” Shota Dighmelashvili, who led the demonstrations this summer, told the protesters gathered this time.

The failure to make good on their promise caught even some members of Georgian Dream by surprise. Several prominent lawmakers quit the party in protest after a vote on the reform failed on November 14. “The result we saw on the electronic board was shocking to many of us,” said Tamar Chugoshvili, who led a moderate wing within Georgian Dream and was one of those members who quit.

“For months it was my job to communicate our [election reform] plans to our partners in the United States, Brussels and Strasbourg… and what it would mean for political progress in our country,” Chugoshvili continued. “I personally created high expectations… and it will be hard for me explain to our partners why we failed to deliver on a promise that we made so eagerly.”

American and European embassies in Tbilisi issued statements regretting the failure to pass the much-hyped constitutional amendment. “We are disappointed,” the U.S. embassy said in a statement.

Georgian Dream leaders claimed that the amendment fell through because of an internal rift in the party. Tbilisi Mayor Kakha Kaladze, Georgian Dream’s general secretary, said that the November 14 vote was preceded by a fierce debate and even physical confrontations at party meetings. But critics found it difficult to believe that rank-and-file lawmakers, who owe their seats in parliament to Ivanishvili, would dare buck the party chairman.

Instead, they suggested, the Georgian public was the victim of a clumsily scripted performance in which Ivanishvili played the good cop and some of his loyalists agreed to assume the role of the bad cop. “Bidzina Ivanishvili staged a show, a puppet theatre about the supposed rebellion of his slaves, the 92 spineless members of parliament,” Dighmelashvili said.

The broad-based objection to the reform failure made for strange bedfellows across the country’s fractured political opposition. Party leaders of all stripes formed a united front against Ivanishvili, rallying their supporters under the slogan “All against One.”

“The government achieved the impossible: unity among all opposition parties. This unity will help us arrive at free elections,” former speaker of parliament Nino Burjanadze said. Burjanadze, the head of the Russia-friendly Democratic Movement Party, was joined at the rally by ardently pro-Western parties like European Georgia and the United National Movement. 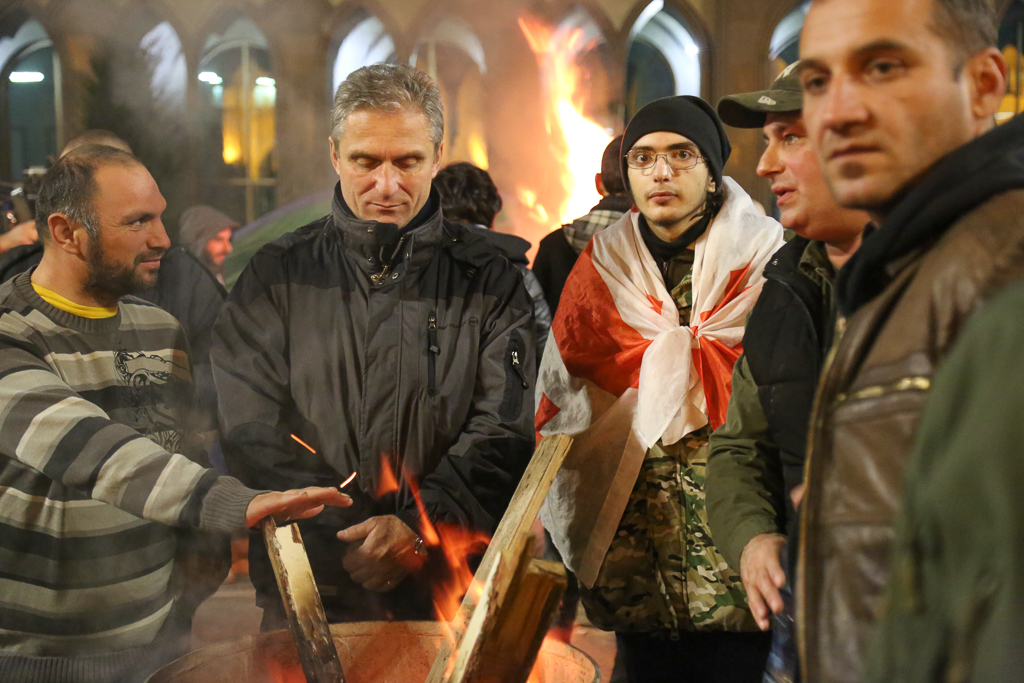 The current electoral system has been criticized for giving unfair an advantage to the ruling party, which in 2016 secured a super majority of 76 percent of the seats in parliament after winning only 48 percent of the national vote. Representatives are elected to the Georgian parliament based on district races, where a winning candidate takes an entire district as in the U.S. legislative elections, as well as on a proportion of the party’s share of the national vote. The constitutional reform in question proposed to drop the mixed system and leave only a proportional vote.