Putin at Valdai: A Deep Dive Into Long-Standing Grievances 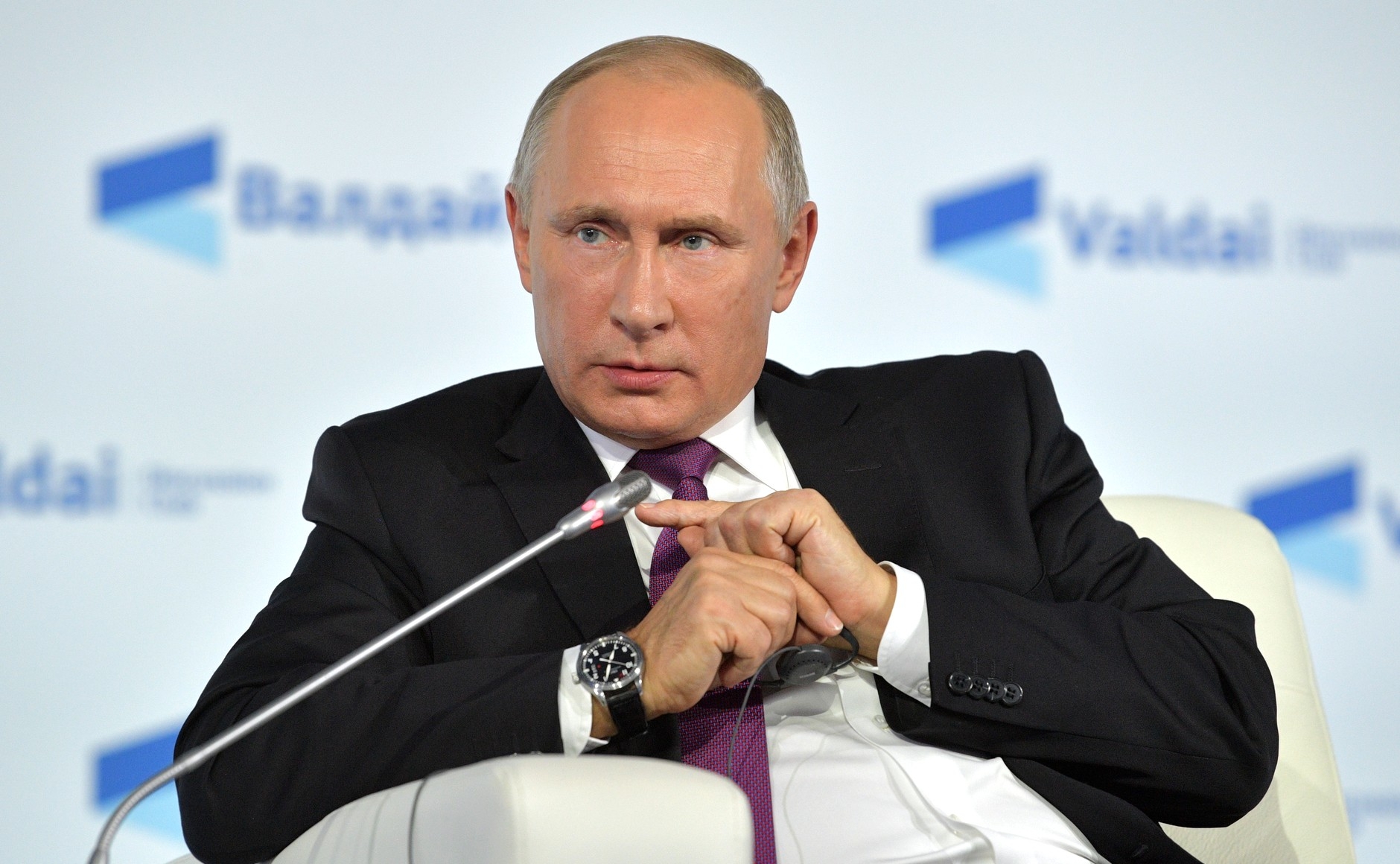 During his October 19 appearance at the Valdai Club, Russian President Vladimir Putin focused on the past to a disconcerting degree, reiterating Russia’s long-standing complaints about the US and exhibiting a conspiratorial mindset, but provided no clue as to where he wants to move US-Russian relations in the coming months and years. (Photo: Russian Presidential Press Service)

Organizers take pride in the Valdai Discussion Club’s generally forward-looking approach. Yet during his appearance before this year’s gathering of foreign experts, President Vladimir Putin focused on the past to a disconcerting degree.

Putin’s preoccupation with recent history has troubling implications for the future, specifically for US-Russian relations. It was surprising that the Russian president devoted such a considerable chunk of time to reviewing arms control and proliferation issues of the 1990s. In doing so, Putin identified a serious challenge for Russian and US leaders: the arms control and nonproliferation architecture that Moscow and Washington constructed during the Cold War is eroding, and no one on either side is doing much at this time to make repairs.

During his October 19 appearance at the Valdai Club, Putin exhibited a strong command of the facts, as well as a conspiratorial mindset. He touched on many of the same themes that he first raised in a 2007 speech to the Munich Security Conference – especially his view that US hegemony threatened the world, and only Russia had the capacity to keep Washington in line.

Many foreign observers hoped he would offer his vision of how to surmount the current impasse in bilateral relations. But they were disappointed.

Putin reiterated long-standing complaints about US democracy promotion, support for Kosovo’s independence, alleged double standards on terrorism and human rights and how US sanctions on Russia are really just commercial instruments to force Europeans to buy American, rather than Russian gas.

Responding to a German questioner, who asked the president what was the greatest foreign policy mistake made by Russia in the post-Soviet era, Putin said, “we trusted you too much,” adding that the West “interpreted our trust as weakness, and you exploited that.”

It was his discourse on arms control, however, that was most unsettling. His assessment was selective and unfair.

Putin correctly noted that the United States, unlike Russia, still has not eliminated all Cold War-era chemical weapons, nor had it built a facility for eliminating surplus plutonium, or ratified the Comprehensive Test Ban Treaty. He also accurately related longstanding Russian complaints that the original Nunn-Lugar Cooperative Threat Reduction (CTR) process was imbalanced in granting US inspectors considerably more access to Russia’s nuclear sites than Russian experts had to American venues.

However, Putin failed to mention that Russia also required several extensions beyond its original 2007 deadline to eliminate its chemical weapons, and received billions of dollars in Western aid to do so. He also omitted the fact that the United States, like Russia, has ceased testing nuclear weapons.

Traditional arms control agreements typically include verification measures that guarantee the parties roughly equivalent access for inspection and monitoring. The CTR framework did not give Russian personnel the same level of access to American weapons elimination programs and facilities because the Russian government did not pay for these US-based activities. The feared intelligence asymmetries and risks highlighted by Putin have already led the Russian government to end CTR activities in Russia. But Moscow and Washington have rechanneled some efforts to eliminate or remove fissile materials from third countries, most notably Kazakhstan and Ukraine.

Perhaps most alarming from a US and European perspective, Putin brushed aside complaints about Russian violations of the 1987 Intermediate-Range Nuclear Forces Treaty (INF), asserting that Russia had no need to violate the treaty since it had, under his leadership, achieved naval and air missile parity with the United States.

“When we agreed to eliminate the intermediate- and shorter-range missiles, the deal concerned Pershing missiles, which are land-based, and our missile systems,” Putin said, according to a transcript posted on the Kremlin’s website. “In fact, this was unilateral disarmament for the Soviet side as well, but now we have both airborne and sea-based missiles.”

“We believe that we have only balanced out the situation,” he added.

He went on to warn of serious repercussions, if the United States responded to Moscow’s treaty violation by redeploying ground-launched missiles in Europe. “If someone does not like it and wishes to withdraw from the treaty, for example, our American partners, our response would be immediate, I would like to repeat this warning. Immediate and reciprocal,” Putin said.

Putin at Valdai did defend US President Donald Trump, saying that the American leader could not pursue his policy of improving relations with Russia due to domestic US politics. However, while he went into great detail about old wrongs, Putin provided no clue as to where he wants to move US-Russian relations in the coming months and years.